What happens when simplicity meets Bollywood? The result is euphoric! The world went in for a momentary surprise and millions of hearts were broken when we all heard that Shahid Kapoor is getting married to Delhi-based girl, Mira Rajput. And on the eventful day of July 05, 2015, the world witnessed the amalgamation of two great souls at a hush-hush wedding ceremony. (Do Read: Anil Kapoor Was Scolded By Wife Sunita Kapoor A Night Before Oscars Due To A Profound Reason)

Almost a year later, on August 26, 2016, Shahid and Mira were blessed with a baby girl, Misha Kapoor. Two-year-old Misha is an internet sensation and every picture that her mom and dad share about her, makes us go weak in the knees over her cuteness. Only recently, did daddy Shahid post an adorable picture with his little angel, whom he had taken out on a bike ride. Sharing the ‘awww-dorable’ picture, Shahid wrote, “Cause she knows she can do it all better.” Here’s the snap: Misha’s mommy, Mira Rajput Kapoor too, is no less a celebrity! She is very active on social media and regularly shares updates and peek-a-boos into her lifestyle. A certain Instagram feature allows followers to ask questions and the user can reply back with an answer. In a series of interesting questions that cropped up, Mira spoke about hubby Shahid Kapoor, dealing with negativity, experience upon having two babies, and life. Here are the snapshots of the same. 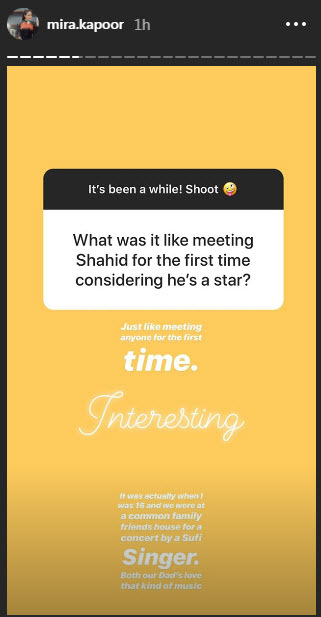 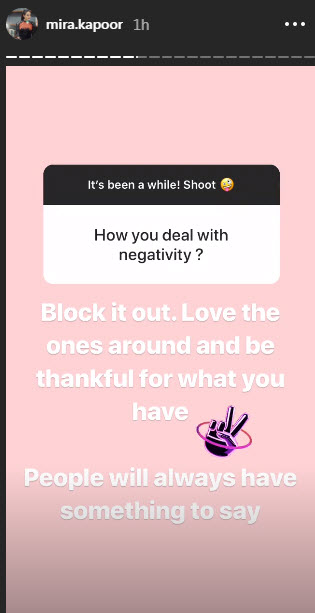 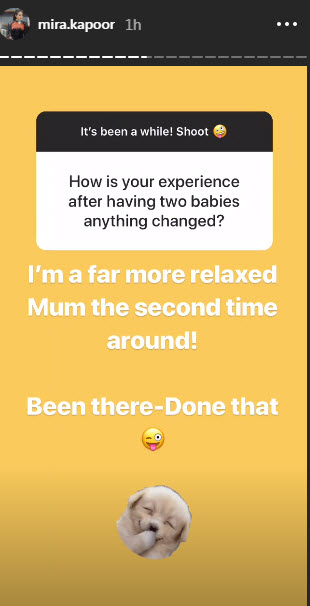 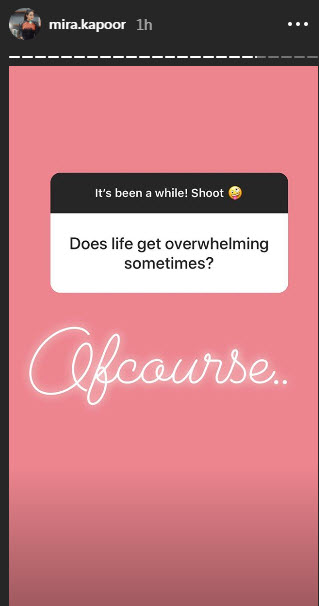 However, the most interesting part of the questionnaire session was when Mira was asked ‘How did you prepare Misha for a sibling?’ by a user and she gave a hands-on answer. Revealing all the secrets and which song Misha sings for her baby brother, the doting mommy shared, “We spoke to her about it a lot. Read a lot of story books to her (Topsy and Tim and the New Baby became a favourite of hers), and let her feel a part of the process even till now! Help around, bring mom a glass of water or sing wheels on the bus to Zain if he’s crying. We let her feel the baby is hers to take care of so she felt like a grown-up little helper.” Checkout the same here: 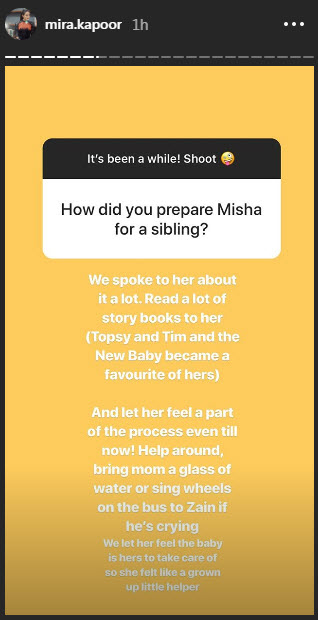 Further speaking about making Misha feel equally important after she has a second sibling, Mira had earlier shared, "This time I already have a toddler around and keeping a balance between the one you have and the one that's on its way is very important. Everything changes, and you don't want that the one who has been the apple of your eyes for so long and feels that she's the centre of your world to feel neglected and ignored. That is very important.” (Must Read: Akshay Kumar Would Have Taken Mom-In-Law, Dimple Kapadia On A Date If Unmarried, But There's A Twist) A few days back, Mira was mercilessly trolled on social media when she was seen walking with Misha, with her baby boy, Zain wrapped in his nanny’s arms. As soon as pictures and videos were clicked and posted by shutterbugs, Mira became a huge victim of trolls as she had clearly stated in one of her interviews about balancing the responsibility of a child and work, “I love being at home, I love being a mother to my child, I wouldn’t have it any other way. I wouldn’t want to spend one hour a day with my child and rush off to work. Why did I have her? She is not a puppy, you know. I want to be there for her as a mother, seeing her grow up cannot be quantified.” Well, this statement surely got Mira into a lot of trouble! 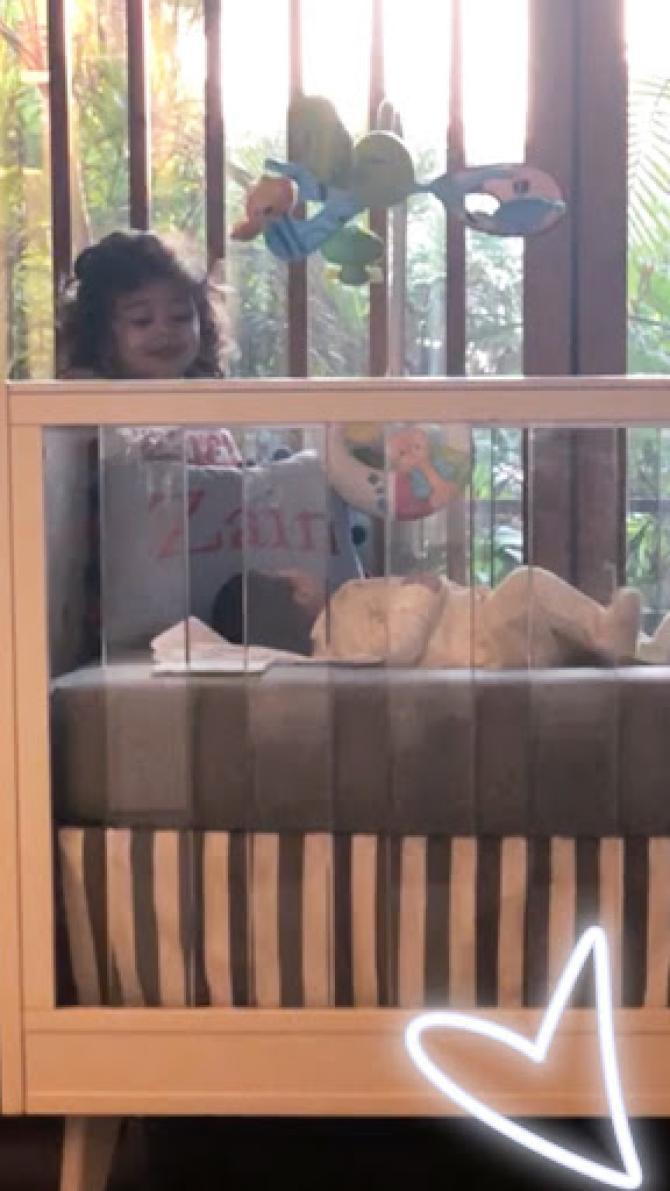 In an interview with Mid-Day, Shahid shared his feelings on paparazzi clicking Misha all the time and stated, “My daughter didn’t choose this glamorous life. What’s her fault? I hate to think of all the glare that’s on her. That is probably the only time I feel I should have had another job. I don’t want her to deal with it. It’s not good for children to go through this. They have a right to a normal childhood."

He further added, “She has to deal with it because I am her dad. It’s tough for me, as a parent, to make peace with that. I hope she will learn how to tackle it when she grows up. Misha is the only one who soothes me in a world filled with harsh critics. I am responsible for a woman who has left her life in Delhi to be with me. I am responsible for my daughter and must be an example for her. I have to be a good human being first, a good actor later. I’ve realized that this drastic shift is helping me grow as both.” (Also Read: Ekta Kapoor To Host A Grand 'Naamkaran' Ceremony For Her Newborn Son Ravie, Details Inside) Everyone wants to know about Mira’s career plans. Speaking of the same, she had earlier shared in an interview, “Yes, I would love to work, especially in a field that is creatively stimulating, but also allows me time with family. Perhaps something with food or lifestyle. I do not have a deadline as I am going to have another baby and then decide.” Hubby Shahid Kapoor is also extensively supportive of Mira in whatever decision she takes. In an interview, Shahid had once shared, “Mira, who is just 22 (then), would prefer to have a second kid soon as well. She wants to flip the norm, get the kids to a certain age and then be free to do what she likes.” Guys, what kind of relationship do you have with your sibling? Keep us posted! 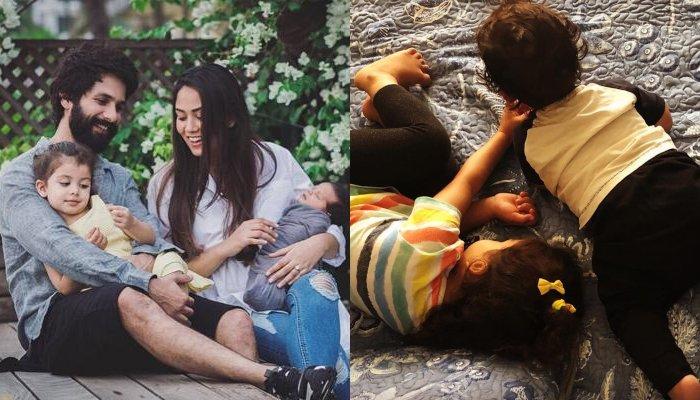 Teri Meri Banti Nahin, Par Tere Bina Meri Chalti Nahi- is every sibling relationship ever! Fighting for the remote, making a fool out of the other one and almost about to murder one another later, switching off the bathroom lights while one is in the shower and reminding him/her about