Those beautiful locks, high-rise buns with frills on the side, extended winged eyeliners and the black and white cinematography. There was something about the ladies ruling the screens back in the 50s. Films had started to run successfully on a commercial level and Indian cinema was beginning to see a rise in fresh powerhouses of talent.

Prakash Raj Gets Married To Wife, Pony Verma Again On Their Son's Wish, Couple Sealed It With A Kiss Mala Sinha, undoubtedly, was one of the superstars ruling the big screen in Bollywood from the era of 50s-70s. With over a hundred films and multitudinous hits up her sleeve, Mala Sinha back then, was an epitome of beauty and talent. Having worked with the who’s who of the filmy world, Mala had a sorted professional and personal life and always kept to herself, devoid of any linkup rumours and controversies. Want to know more about this veteran actresses’ life? Read on!

Recommended Read: Ajay Devgn's Wife Kajol Once Wanted To Leave Home With Kids After A Rumoured Affair With His Co-Star 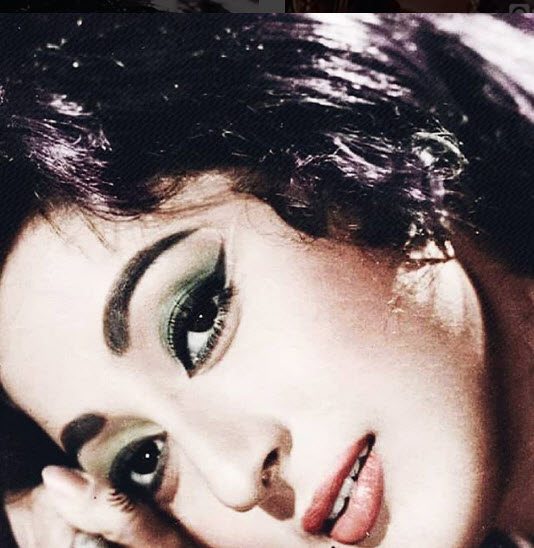 Originally belonging to a Nepali-Christian family, Mala Sinha hailed from Kolkata. Her parents had named her Alda Sinha, but she soon changed it to Baby Nazma when she entered the film industry as a child artist. Mala was a proficient singer and dancer and was one of the certified singers with All India Radio. By the way, do you know something? Mala Sinha, once upon a time, hated the name given to her (Alda) by her parents and this had a hilarious reason. In an interview, she had shared:

“My parents christened me Alda Sinha. Everybody in school called me Dalda Sinha.  How I hated my name. Dad and mum never called me Alda though. To them, I was always their little ‘Baby’. Soon, the entire school was calling me ‘Baby Sinha’ too.”

Speaking about looking back at her early life and career, the Do Kaliyaan star shared in a 2016 interview with Deccan Chronicle:

“With a sense of deep joy, gratitude and disbelief! I was nothing. I didn’t want to be an actress. I wanted to be a singer. Right from childhood, I would copy Lataji’s songs right down to most minute nuances. As a child, I lived in Bhawanipur in Kolkata, where I was known as ‘Baby Lata’. I’d be called to sing at Durga Puja or at birthday parties. I wasn’t a trained singer. I had a god-gifted ability to sing. How was I to know that one day Lataji would sing for me! I feel blessed.”

Do Read: Sunny Leone Met Daniel Weber At A Party Rejected His Proposal. He Kept Sending Flowers For 2 Months 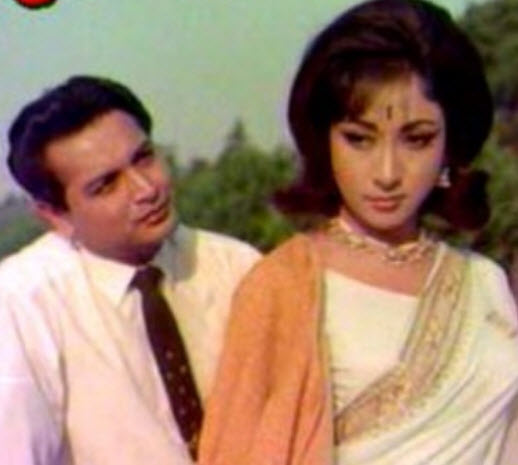 The course to success did not start smooth for Mala. Inspite of having hits as a child artist in her kitty, Mala Sinha had a ‘bumpy ride’ in Bollywood. Back then, noted director, Amiya Chakravarty came across a picture of the young and beautiful Mala in a Filmfare magazine. He immediately went on to to sign a three-film contract with the actress. But the first film in the contract, Badshah (1954) tanked at the box office and hence, Amiya called off the contract. For the next year as well, Mala Sinha kept on tasting failure until legendary actress, Geeta Dutt offered her Pyaasa (1957). Her big break in the film industry came with this film and the rest as said, is all history!

Lost her heart in Kathmandu 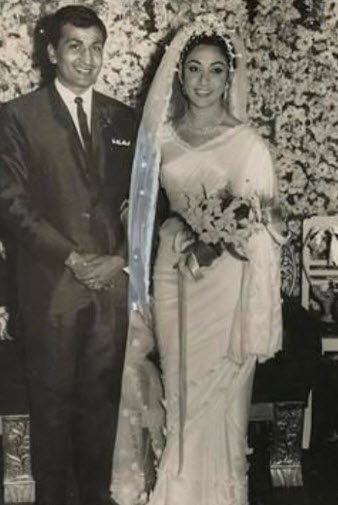 Mala kept on delivering hits after hits when, due to a Nepali film project called Maitighar (1966), she had to travel to Kathmandu. Little did she know that she would be leaving something very precious behind her in the snow-capped mountains. Do you know what was it? It was her heart! Yes, that is exactly where Mala met the man of her dreams, Chidambar Prasad Lohani. Chidambar was one of her co-stars in the movie (He was working in the customs but was offered a role for his good looks). The film wrapped its shoot and soon after, Mala returned to Mumbai. But CP Lohani had already captivated the heart of the beautiful actress. A few months later, Chidambar received a letter from Mala, wherein the actress had penned her heart out, confessing her love for him. Chidambar had already become a household name in Nepal by then and he was equally besotted by Mala. Soon after, they started meeting regularly and that’s when they decided on making their relationship forever. Speaking about her hubby and how marriage had happened, Mala had shared in an interview with Filmfare:

“My parents wanted me to get married as I had turned 26. Baba (father Albert Sinha) believed the industry boys were not trustworthy. Also, ego problems could creep in. Baba wanted a pahadi, a Nepali like us. Baba liked CP.” In 2017, Mala was felicitated in Kathmandu for her amazing contribution to Indian and Nepali cinema. Recalling about how her first Nepali film, Maitighar helped shape her life and career, she had stated:

“It was basically an event to honour the people associated with Maitighar, the first Nepali film that was released 51 years ago. The film starred me and my future husband CP Lohani. We met and fell in love during the making of this film.”

Also Read: Hrithik Roshan's Love Life: Parents Had To Intervene To Ask His Co-Star To Stay Away From Him 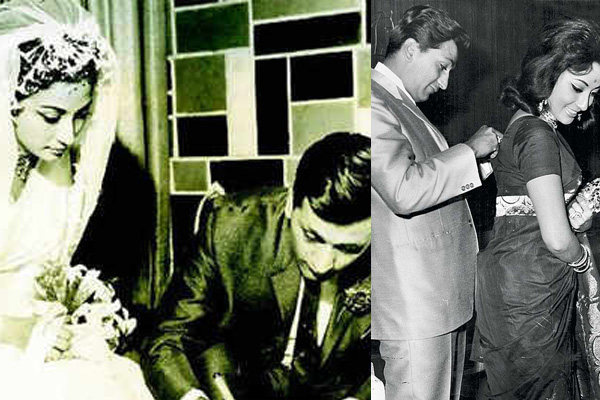 Ever since their relationship, Mala and Chidambar were in long-distance relationship which went down well with the couple, even after marriage. While Chidambar looked after his business back in Kathmandu, Mala continued to rule the silver screen. The couple was soon blessed with a daughter, Pratibha Sinha. You can remember her as the lead in the song, Pardesi Pardesi from Raja Hindustani. Speaking about Mala’s understanding with her husband on making her marriage work, Mala was quoted as saying to Filmfare:

“My husband understood my passion for work. And that I couldn’t be confined to the kitchen. I was not the club going type either. I’d have gone crazy. There would have been friction. So, he let me work. Distance, in fact, fostered love.” 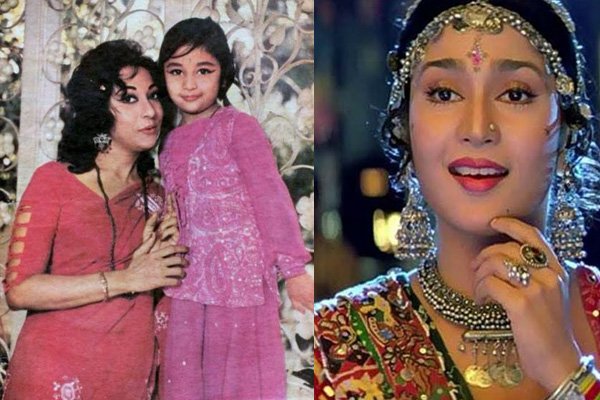 Do you know? The couple is still in a long-distance relationship and is happily settled. Speaking about the same in the aforementioned felicitation ceremony, Mala had shared:

“He stays in Kathmandu. I visit him and sometimes he visits me. Because of this function honouring Maitighar I got a chance to be in Nepal with my husband for four months. I even celebrated my birthday [on November 11] in Nepal this time.”

Mala’s husband had a condition that she had to leave the industry post-marriage, to which she had agreed. But she couldn’t stay away from her first love, films, for a long time. This is what the beautiful actress had shared once in an interview:

“Of course my husband had laid down a pre-condition that I quit films after marriage. I had even agreed. But good offers continued to pour in, even after the wedding. I became ‘lalchi’ (avaricious) and continued to accept the offers. Initially, my husband was a bit upset. Fortunately he wasn’t a nag. So he let me pursue my career”. 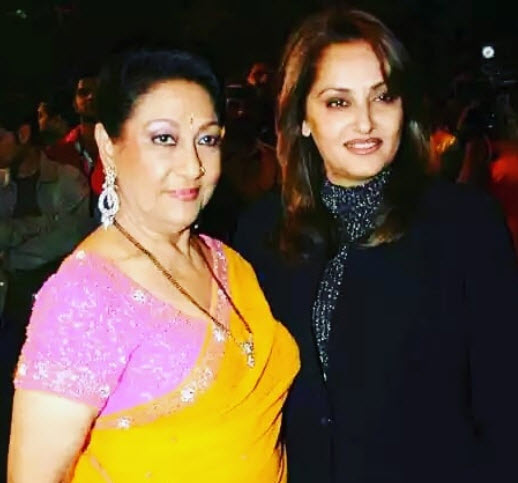 Mala Sinha was last seen in the 1994 movie, Zid. Since then, she has stayed away from media and lights. So, is she missing the camera? She had replied in an interview:

“I miss being in front of the camera. For 20 years, I did nothing but work work work. Then it stopped. I got married, my daughter was born. My life changed. But no complaints”.

Don't Miss! Aruna Irani's Love Life: Was Overfriendly With Mehmood Once, Tied The Knot With A Married Man 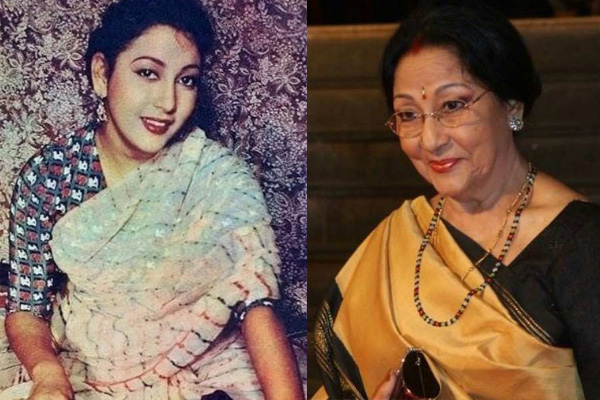 In 2013, the world saw an infuriating Mala Sinha who disapproved of herself receiving the prestigious Dadasaheb Phalke award. As per the legendary actress, she felt insulted as her name was not even mentioned on the invitation card whereas, Asha Bhosle and Pam Chopra’s name was written. Speaking with Bollywood Hungama, Mala had then revealed:

“They had informed me that I was to get the award a month ago. Though I don't go out too much these days I did agree to come. They had a press conference in a small restaurant on Linking Road to announce the awards. None of their winners not Ashaji not Pam Chopra, came to the press conference. I went. They came home with the invitation last week. Only to insult me in this way. Forget my picture they haven't even put my name in the invitation card. I told them to pick up their invitation cards and leave. I don't want their award. This is an insult to me as an artiste. I can't tell you how upset I am about it. I agree Asha Bhosle and Yash Chopra are great artistes. But am I so small an artiste that my name should be left out? Then don't give me the award. I don't want it."

Well, that was all about the life of Mala Sinha. Wasn’t she a totally sorted person, both personally and professionally? She never let criticisms pull her down, and remained loyal to her work, without paying attention to the outside world. Isn’t this a sheer teaching in itself? How did you like Mala Sinha’s life story? Do drop us a line in the comments section below.

Next Read: After A Failed Marriage With Vinod Mehra, Bindiya Goswami Eloped To Marry To Director JP Dutta