A father-daughter bond can never be explained in words. While for a daughter, her father is her first love, for a father, his daughter is his little princess. Even if the two don’t always profess their love for each other or hug each other, their heart breaks every time the other person is troubled or feels low. We are totally loving how with the passing years, the equation between a father and daughter is changing and how now they don’t think twice before hugging each other, sharing their problems or spending some fun time together. Mahesh Babu’s equation with his daughter, Sitara is our favourite as the two always define the new age father-daughter relationship. (Also Read: 'Ludo' Fame, Pearle Maaney's Colorful Baby Shower, Her Amusement Park Themed Cake Stole The Show)

If you don’t know, Mahesh Babu and Namrata Shirodkar had met in the summer of 2000, for the first time for a movie, and by the end of the film, Cupid had hit them hard and the two had already fallen in love with each other. On February 10, 2005, the couple had taken the wedding vows and in 2006, Mahesh and Namrata had welcomed their first kid, Gautam Krishna. The family of three had turned into a family of four when the couple was blessed with their second child, a daughter, named Sitara in 2012. It is since then that Mahesh Babu has been showering endless love on his daughter, Sitara and we luckily get glimpses of the same. On January 12, 2021, Namrata Shirodkar took to her IG handle to share an adorable picture of her husband, Mahesh Babu with their daughter, Sitara. In the picture, the father-daughter can be seen lying on a couch, entangled in each other’s embrace. While Sitara was resting her head on her dad's lap, Mahesh can be seen resting his head on her lap. The two can be seen enjoying a conversation and smiling. Other than this endearing moment, Mahesh and Sitara’s night suits were also twinning. Mahesh can be seen wearing a black and white striped pyjama and his daughter, Sitara can be seen wearing a black and white striped coordinator night suit. Sharing the picture, Namrata wrote, “Entwined in striped” and “Home sweet home” atop it. 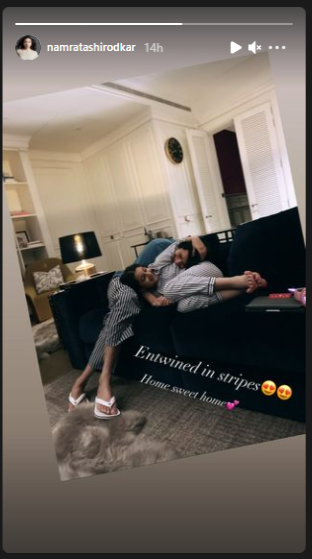 A few days back, we had also witnessed Sitara twinning with her mommy, Namrata as they had stepped out for shopping. Taking to her IG handle, Namrata had shared a picture with Sitara from their shopping tales. In the picture, the mommy-daughter could be seen twinning and winning our hearts. Namrata and Sitara had opted for a white t-shirt, while Namrata had paired it with grey cargo, her darling daughter, Sitara had opted for navy blue shorts. The mommy-daughter had worn similar sport shoes. Namrata could be seen holding her daughter, Sitara’s hand while both had their masks on. Sharing the picture, Namrata had narrated how difficult it is to shop with the little one. She had written, “After pulling me out of my cozy cocoon.. it so seems that my little miss is the one whose been forced to look around for her little knick-knacks Shopping never seems easy with little ones #afternoonwellspent #maskup.” Namrata had also shared a picture from their shopping spree on her IG stories, calling it, “Pony’tale’shoppers!!” (Don't Miss: New Mom, Anushka Sharma's First Picture With Her Newborn Daughter, She Looks At Her With Utmost Love) 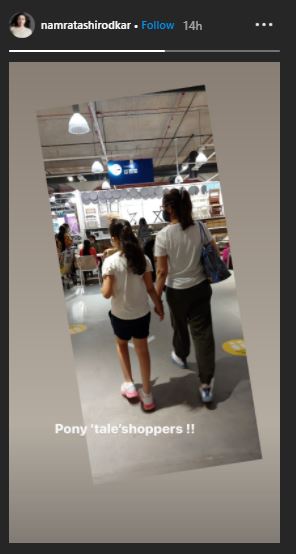 On the occasion of International Girl Child Day, i.e., October 11, 2020, Mahesh Babu had taken to his IG handle and had shared a beautiful picture of his baby girl, Sitara. Along with the picture, he had penned a heartwarming note expressing how proud he is to have a baby girl. His note could be read as “There is no greater gift than a girl child! Proud of my little one, who's trying to create her own little world on her terms. Let your dreams not be ignored, let your voice be heard. Be strong. Fight for what's rightfully yours!! We will make this an equal world! Celebrating my little girl and all the little girls of this world #InternationalGirlChildDay.” (Don't Miss: Anita Hassanandani's Baby Kicks As Hubby, Rohit Reddy Romances Her For The Maternity Shoot [Video]) 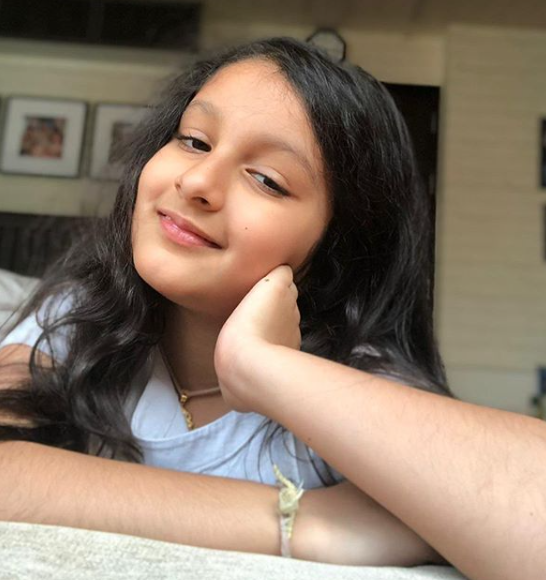 We wish Mahesh Babu and Sitara’s bond flourish like this always!