Kareena Kapoor posted an unseen picture from the sets of the film, 'Laal Singh Chaddha' and shared a special memory.

Kareena Kapoor Khan is quite excited as her much-awaited film, Laal Singh Chaddha is receiving a lot of love from the audience. Kareena is one of the most bankable actresses of Bollywood, who not only aces her professional commitments but also balances her mommy life with her two little munchkins, Taimur Ali Khan and Jehangir Ali Khan.

On May 14, 2022, Kareena Kapoor Khan took to her Instagram handle and dropped a million-dollar picture from the sets of her film, The Devotion of Suspect X. In the picture, Kareena could be seen sitting on a chair, while getting her hair done, whereas, her doting son, Jehangir sat opposite to her. The stunning actress was also seen making funny faces to entertain her Jeh baba. She captioned the picture as:

Kareena Kapoor Khan Feels 'Terrible' For Her Kids, Taimur And Jehangir Being Trolled For Their Names

Saba Ali Khan Hits At Troll For Calling Her 'Over Dramatic' As She Defends Nephew, Jehangir's Name

“Double whammy!! Getting ready with the best man for company…DAY-4-Kalimpong #Devotionofsuspectx." The film, Laal Singh Chaddha will always be close to Kareena’s heart as she was pregnant with her little munchkin, Jehangir. On August 11, 2022, Kareena took to her IG handle and posted an unseen picture from the sets of Laal Singh Chaddha. In the picture, a pregnant Kareena was seen in a candid conversation with Aamir and director, Advait Chandan. She captioned the picture as: 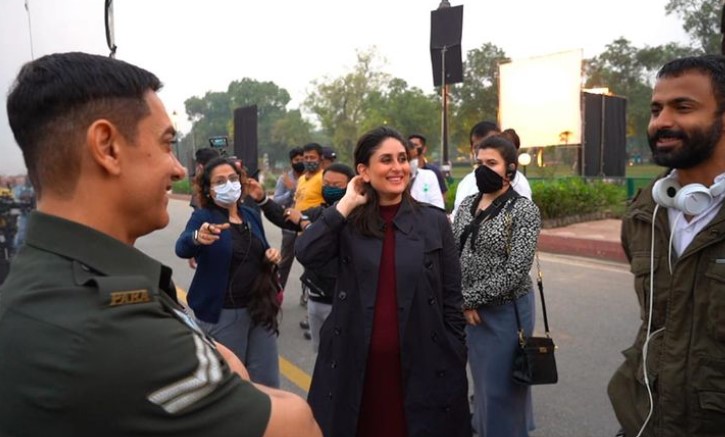 On May 30, 2022, Kareena had shared the much-awaited trailer of her film, Laal Singh Chaddha on her IG handle. While the film's trailer caught everyone's attention and grabbed headlines for Aamir and Kareena's chemistry, the latter also shared that her son, Jeh is also a part of the film. Her note could be read as:

"A pandemic, two lockdowns, and a baby later... one of my most special films... also because my Jeh baba is very much a part of it (in my tummy) Thank you Advait and Aamir for having not just me but the both of us in it... it's something I will cherish forever. Over to you guys, finally… #LaalSinghChaddha."

A few months back, Kareena Kapoor had taken Jeh to the shooting sets of one of her upcoming films. Taking to Twitter, the film’s director, Sujoy Ghosh posted a cute photo of the mother-son duo as they were papped stepping outside in style. In the picture, we could see Kareena lovingly holding Jeh’s hand as he tries to walk. Sujoy had captioned the picture as:

“Superstar on the set. Along with his mother.”