As Karan Johar turned 50 on May 25, 2022, his close friends including Kareena Kapoor Khan, Manish Malhotra, Karisma Kapoor and many more posted cutesy wishes for him. Check out!

Popular director, Karan Johar has made a brand of himself in the Bollywood industry starting from his directorial debut with the film, Kuch Kuch Hota Hai, in 1998. Since then, he has never looked back, and with his Dharma Production house, he has been giving superhit films, one after the other. For the unversed, he had also embraced fatherhood in the year 2017, with his twins, Yash and Roohi, via surrogacy, and since then, he has been enjoying every moment of his parenthood.

On May 25, 2022, Karan Johar turned 50, and his friends from B-town couldn’t keep calm from wishing him in the sweetest manner. One of his closest friends, Kareena Kapoor Khan took to her IG handle and shared a throwback picture with the ace producer-director to mark the latter's birthday. In the picture, Kareena was seen holding Karan's hand as the duo was clicked. Then, talking about the cutest pout, sucking their cheeks in, Kareena wrote a hilarious birthday wish for Karan, which can be read as:

"I don’t know are we pouting? sucking our cheeks in …well what the hell ..it’s us …you and me …me and you..forever…a love like no other….let’s dance tonite like never before …cause it’s my sweethearts birthday. Happy 50 @karanjohar…No one like you." 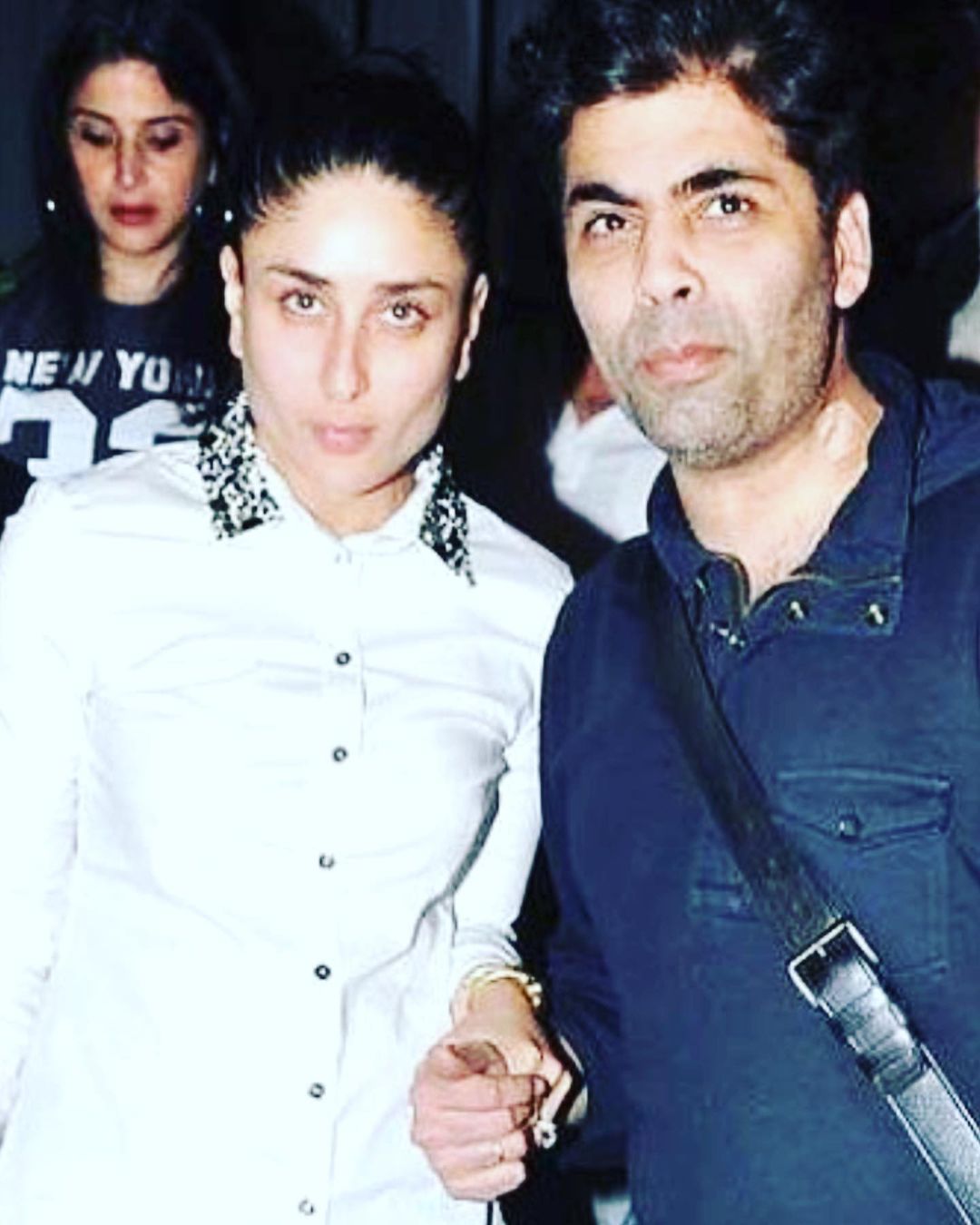 The newlywedded diva, Alia Bhatt also took to her Instagram handle and shared three pictures with the birthday boy, Karan Johar. In the first picture from Alia's pre-wedding ceremony, Karan was seen giving a peck on her cheeks and in the next photo, the duo was seen dancing their hearts out at the former's reception party. Along with this, Alia penned a cutesy note for her best friend calling him her father and mentioned:

"To the most generous soul I know! .. to the man who is my father .. my best friend .. and my mentor!(displayed in these pictures respectively) HAPPY 50TH BIRTHDAY K! I pray and wish for only love peace and joy in your life, you deserve it all and much much more for all the light and goodness you bring into peoples lives!!! I love you more than this Instagram post can ever handle." 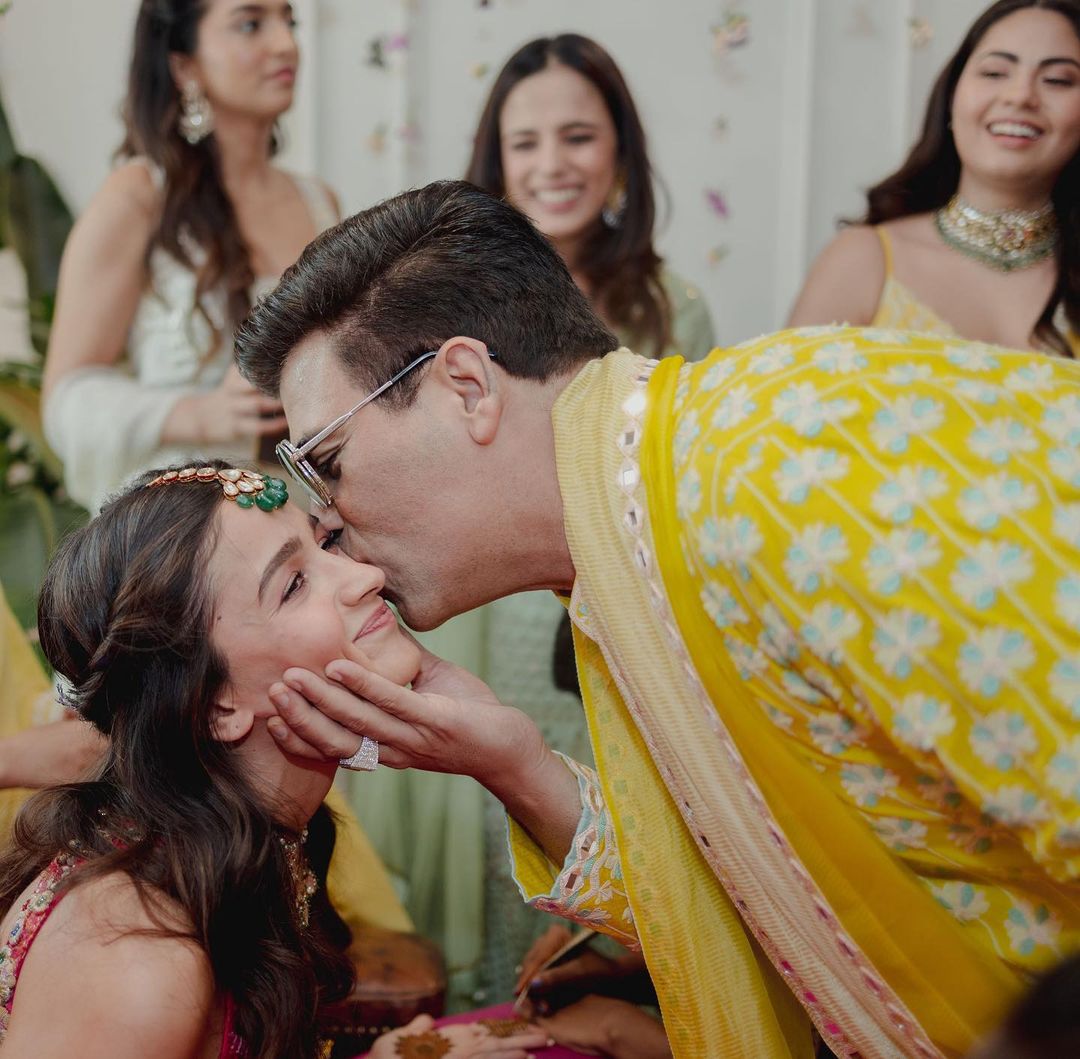 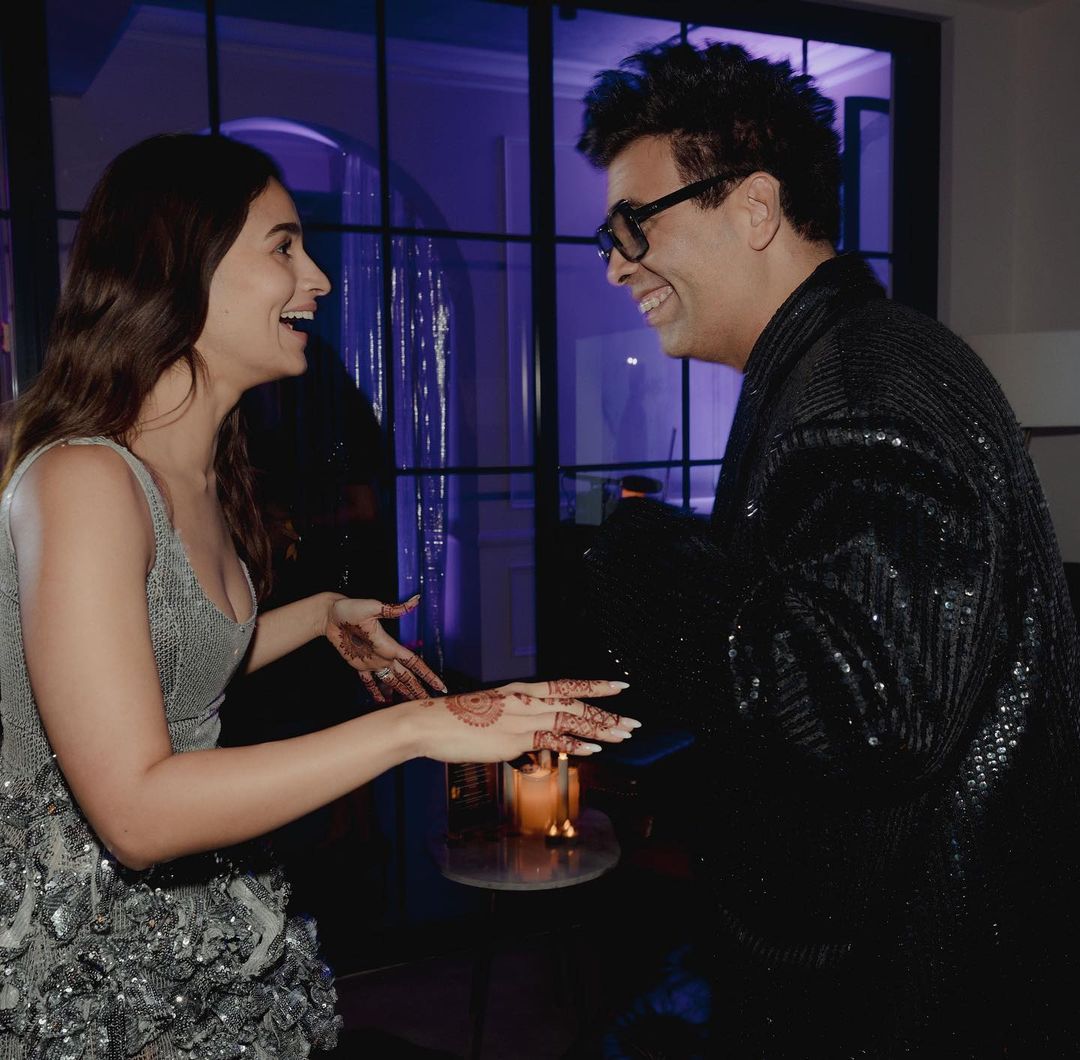 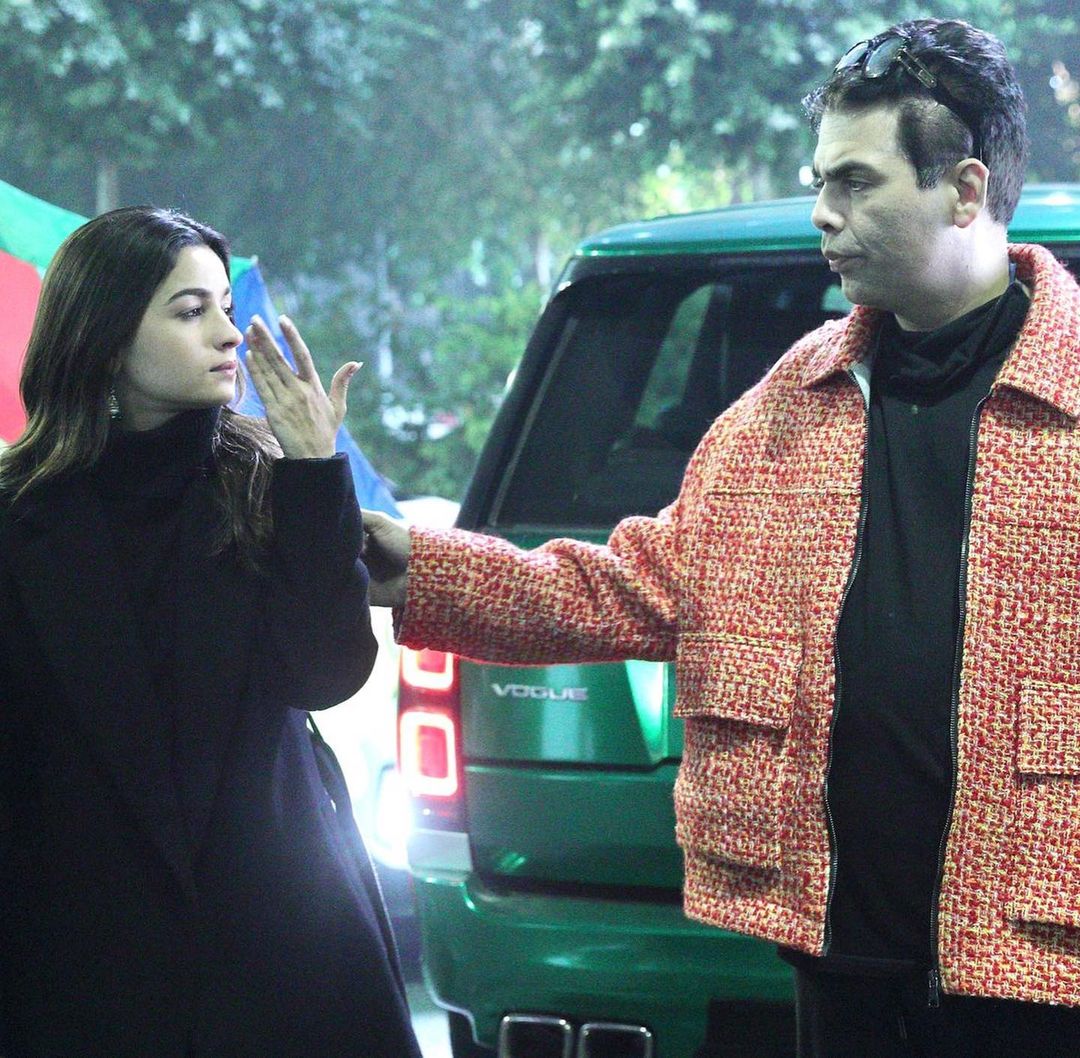 Karan Johar also shares a warm bond with celebrity fashion designer, Manish Malhotra. A few hours ago, Manish took to his Instagram handle and shared a video with the birthday boy wishing him his 50th year. Soon, Karan revealed that Manish, who is capturing the video, is 55. Later, the duo got involved in a sweet conversation, and Karan was also seen giving a flying kiss to his friends and fans watching this video. Sharing the video, Manish wrote:

"Happyyyy Birthdayyyyyyy my dearest and the bestest @karanjohar. wish you happiness and love always #friendsforever #family."

Karisma Kapoor also took to her IG stories and wished her close friend from B-town, Karan Johar on his birthday. She shared a picture of the duo in her first story, wherein we can see the duo wearing shimmery ensembles and looking dashing in them. Atop it, she wrote, "Happy 50th birthday to the Golden Boy." In her following story, Karisma shared a picture with Karan, Varun Dhawan and Mallika Sherawat. Atop it, she mentioned:

"And let's continue posing this decade." 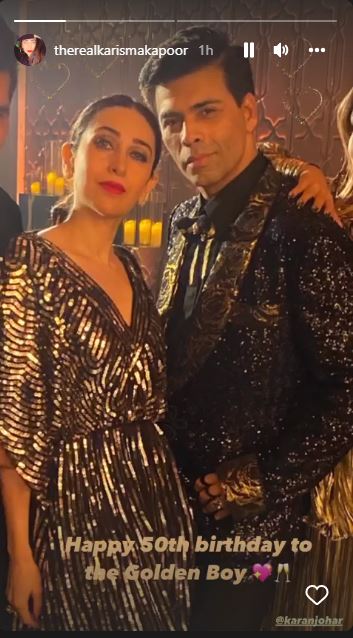 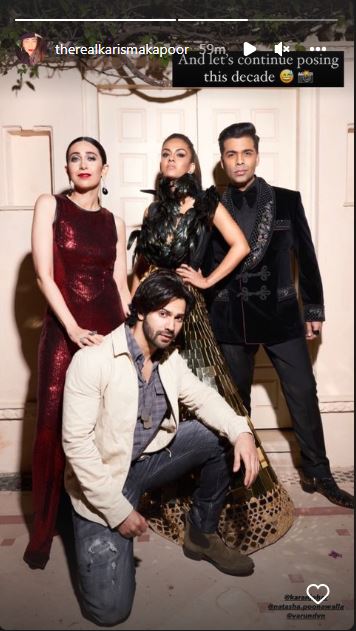 Malaika Arora took to her IG handle and shared a video mashup of her various throwback moments with her dearest friend, Karan Johar to mark the latter's 50th birthday. The video shows moments from Malaika and Karan's vacations, parties, events, and many more. In one picture, we can also see Karan posing with Malaika and her darling boyfriend, Arjun Kapoor. Sharing the video for him, Malaika penned:

"Happy 50th to the one n only @karanjohar #heartofgold."

Malaika Arora's sister, Amrita Arora is also part of the famous celeb gang, including her sister, and other BFFs from B-town like Kareena Kapoor Khan, Karisma Kapoor, Manish Malhotra and Karan Johar. On the ace filmmaker's 50th birthday, Amrita took to her IG stories and shared a beautiful picture with Karan Johar. Atop it, she wrote:

""A rare moment when roles are reversed. Happy birthday to our darling @karanjohar! Keep shinning like you do." The CEO of Dharma Productions, Apoorva Mehta is Karan Johar's childhood sweetheart. On the filmmaker's 50th birthday, Apoorva shared two posts containing several throwback moments with him and penned a long birthday note, revealing Karan's importance in his life. An excerpt from Apoorva's note for Karan can be read as:

"For me... he is my childhood friend Karu... a constant with many shades of passivity, a kind-hearted companion with a flair for theatrics... he is the life of any party who can get you out of your shell with his childlike innocent humour, and generous love..."

We wish a happy birthday to the celebrity's favourite director, Karan Johar!