Kapil Sharma and Ginni Chatrath have embraced parenthood for the second time. Scroll down to know more!

There is no greater joy in the world than the feeling of holding your little one in your arms for the first time. The feeling of holding a life in your hands whom you loved, cared and nurtured for nine months brings happy tears in your eyes. And television couple, Kapil Sharma and Ginni Chatrath are going through same emotions as the couple has embraced parenthood for the second time. Scroll down to know more! (Recommended Read: Karanvir Bohra Shares His Thoughts On Having A Baby Boy To Complete His Family)

Rumours of Kapil Sharma and his wife, Ginni Chatrath's second pregnancy had started doing rounds around the time of Karwa Chauth last year when Ginni was spotted with a baby bump in a video posted by Bharti Singh. Bharti Singh-Haarsh Limbachiyaa and Kapil Sharma-Ginni Chatrath had celebrated Karwa Chauth together. Although, the couple had not commented on the news of their second pregnancy for a long time. Ace comedian and an elated daddy, Kapil Sharma took to his Twitter handle to share the good news with his fans. Kapil Sharma and Ginni Chatrath are blessed with a baby boy, and the doting father announced the same on his Twitter handle. He wrote, "Namaskaar. We are blessed with a Baby boy this early morning, by the grace of God Baby n Mother both r fine, thank you so much for all the love, blessings n prayers. Love you all. Ginni n Kapil. #gratitude." 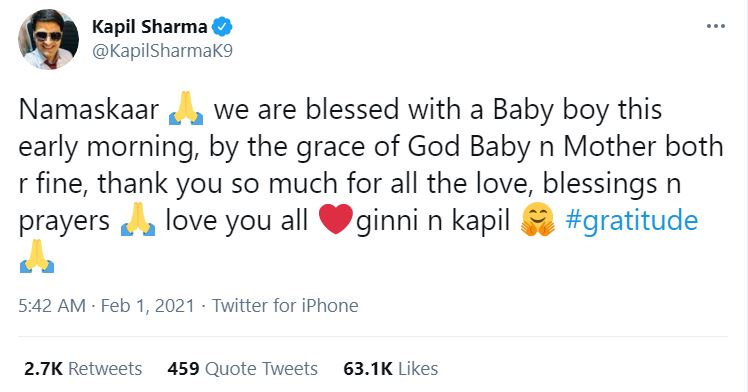 On December 10, 2019, Kapil Sharma and Ginni Chatrath had embraced parenthood for the first time with a little doll's arrival in their lives named, Anayra Sharma. Baby Anayra has officially been promoted to big sister now with the arrival of her baby brother. The comedian had announced the arrival of his little girl through his Twitter handle and had tweeted, "Blessed to have a baby girl need ur blessings. Love you all. Jai mata di." It was on January 28, 2021, that Kapil Sharma had finally confirmed the news of his wife's second pregnancy. Kapil had taken to his Twitter handle and had hosted an 'Ask Me Anything' session, wherein he had confirmed the soon-arrival of their second baby. A fan had asked Kapil about his show going off-air, "@KapilSharmaK9 sir , show off air kyu kr rhe h #askkapil." To which, Kapil had instantly replied, "Bcoz I need be there at home with my wife to welcome our second baby." (Also Read: Shaheer Shaikh Is Missing Going On A Vacation With His Wifey, Ruchikaa, Shares A Throwback Picture) 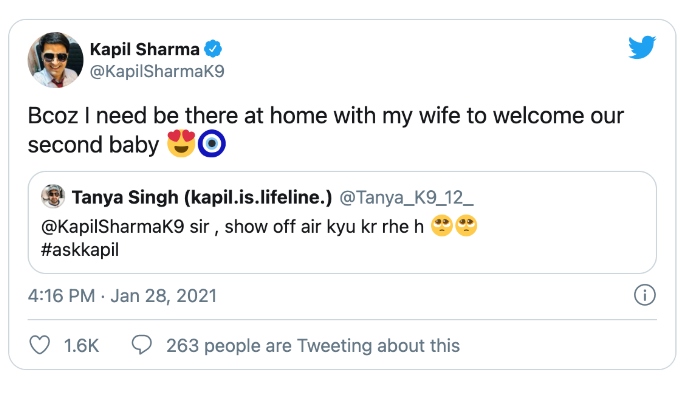 In earlier interviews, Kapil had talked about his journey of fatherhood and his daughter, Anayra. In one such interaction with Pinkvilla, Kapil had revealed the meaning of his daughter's name. The actor had shared, "Anayra's meaning is happiness. She is my baby, so that's what it means. Ginni [Chatrath] and I had told our friend's circle about names, and I liked Anayra the most." The actor had also talked about his fatherhood experience and he had stated that Anayra made him much calmer and that he too, becomes a child when he plays with her. Kapil Sharma and Ginni Chatrath had celebrated their little doll, Anayra's first birthday on December 10, 2020, and it was a party we wish we were invited to! As Anayra Sharma had turned one on December 10, 2020, her doting parents, Kapil Sharma and Ginni Chatrath were elated beyond measure. Sharing pictures from Anayra's first birthday bash, Kapil had written, “Thank you so much for sending ur love n blessings to our laado on her first bday. Ginni n Kapil #gratitude #blessings #anayra #happybirthdayanayra.” Anayra had looked like a doll in a frilled frock as she had posed with her Baby Shark themed birthday cake. (Don't Miss: Shatrughan Sinha Talks About His Wife, Poonam Sinha, Calls Her The 'Backbone Of The Family') 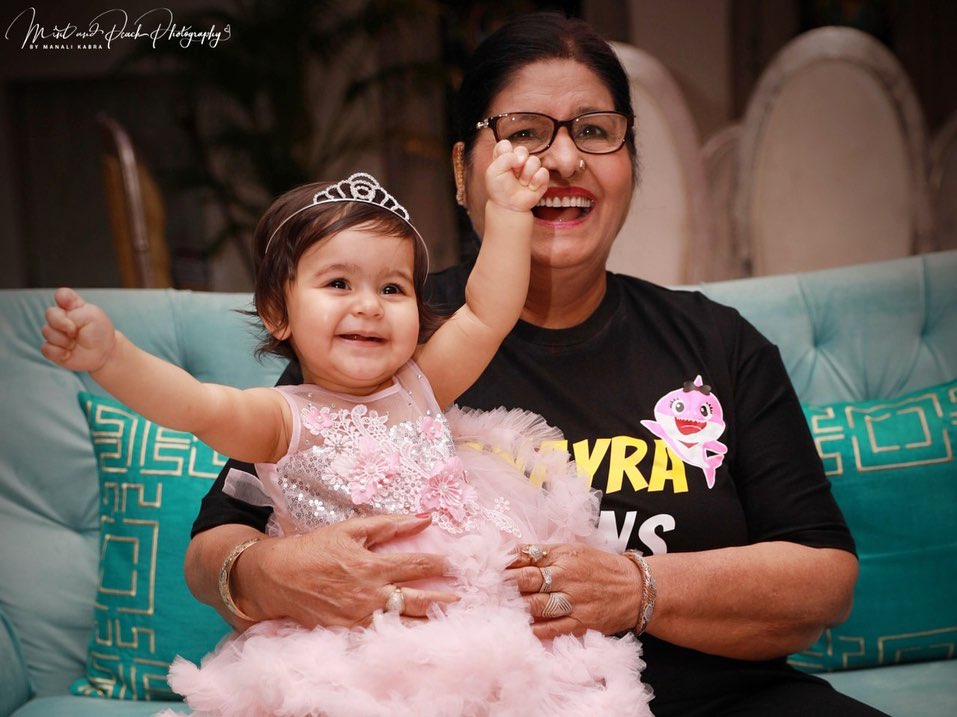 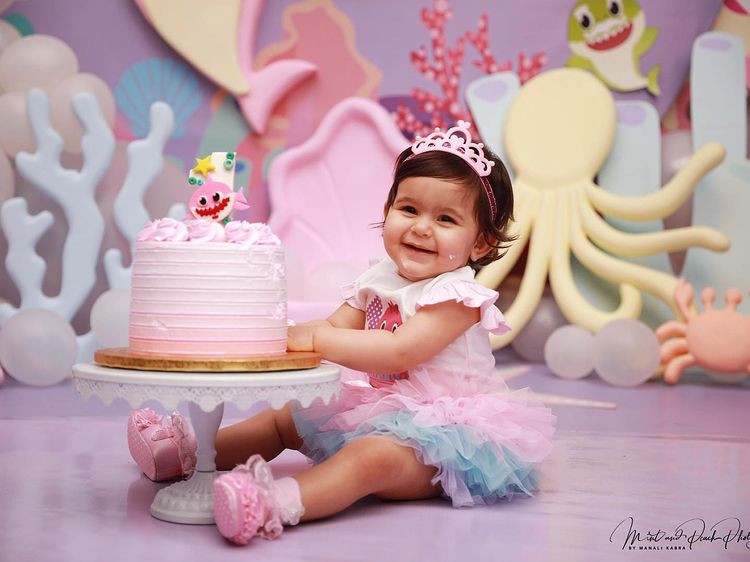 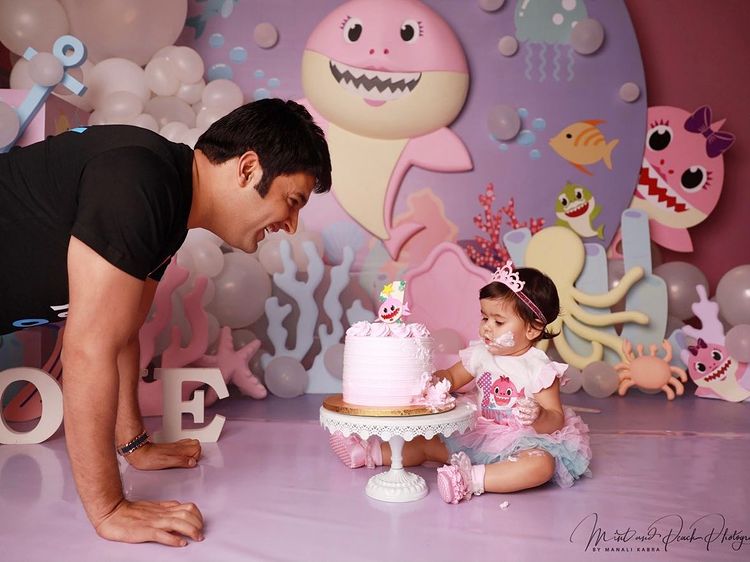 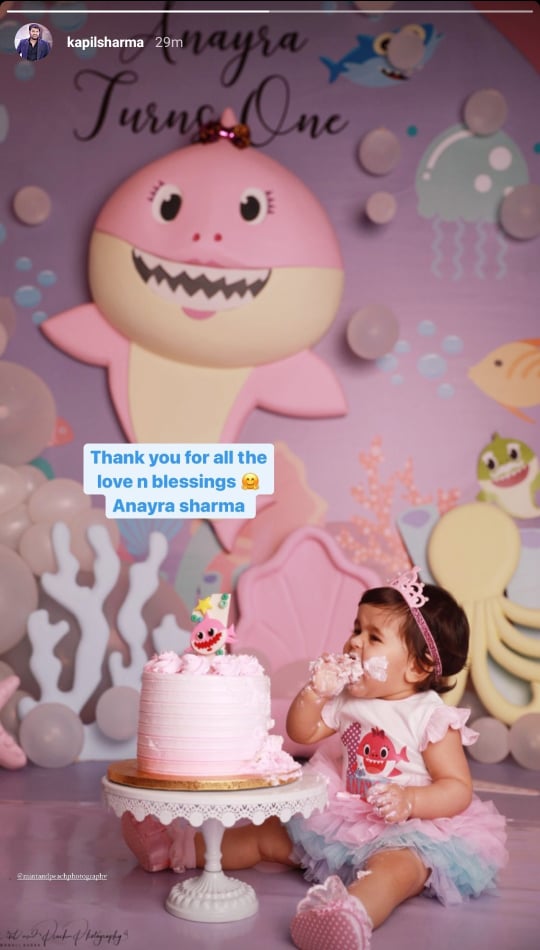 Many many congratulations to Kapil and Ginni!