In a fun 'AMA' session with her fans, Jasmin Bhasin answered various questions related to her marriage and engagement plans. Scroll down to find out!

Television actors, Jasmin Bhasin and Aly Goni claim to be each other's best friend, but their fans always seem to be wanting more! They had participated in the ninth season of Khataron Ke Khiladi and had won everyone's heart with their amazing chemistry. Fans had loved and adored their goofy sides and had rooted for them to be together. Since then, the dating rumours of Aly Goni and Jasmin Bhasin are on the heat and fans are eagerly waiting for a confirmation. (Recommended Read: Sunil Gavaskar's Dig At Virat Kohli's Wife Anushka Sharma During Commentary Didn't Go Well With Fans)

On September 24, 2020, Jasmin Bhasin took to her IG handle and engaged in a fun 'AMA' session with her fans. Jasmin answered various questions related to her marriage and engagement plans, what kind of guy she would like to have as her boyfriend and her rumoured beau, Aly Goni. Scroll down to know it all! Answering a fan's question as to if Aly Goni is really her best friend, Jasmin Bhasin wrote, "Yesss." Another fan asked her, "Boyfriend name plz". To which, Jasmin gave the wittiest response and said, "Jab hoga tab nam ke sath sath photo and address bhi bta doongi." Answering a question about what does she feel for her rumoured beau, Aly Goni, Jasmin wrote, "Blessing and support system." Revealing her engagement plans in response to the question of when is her engagement, Jasmin answered, "Jab mujhe wo milga jisse mujhe mohabbat ho jaegi and usse mujhe." A fan even went on to propose her, in response to which, Jasmin revealed her marriage plans and said, "Haha sorry filhal plan nahi hai." Check out the screengrabs of the questions and answers below: 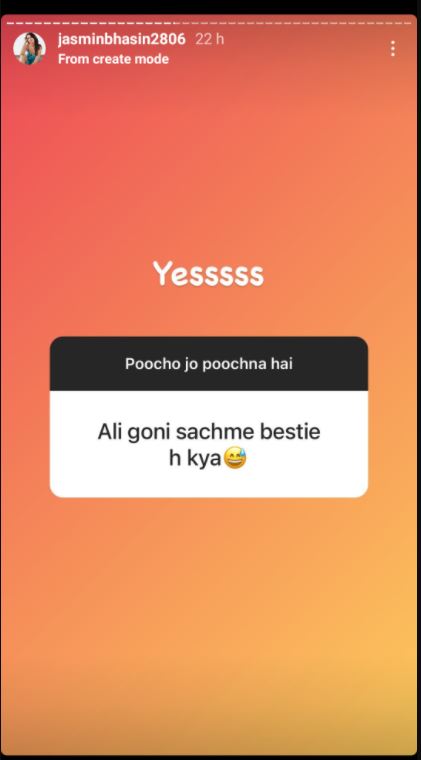 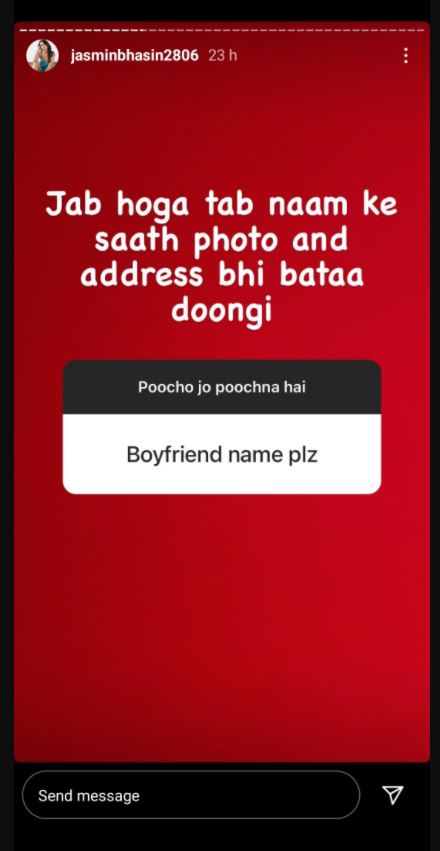 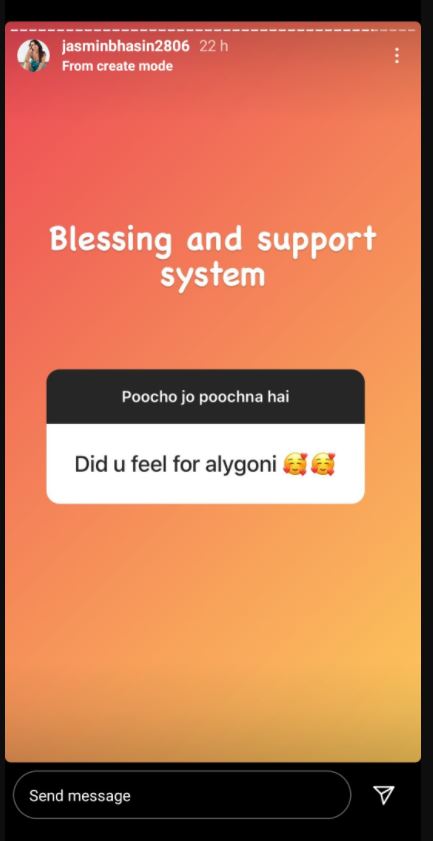 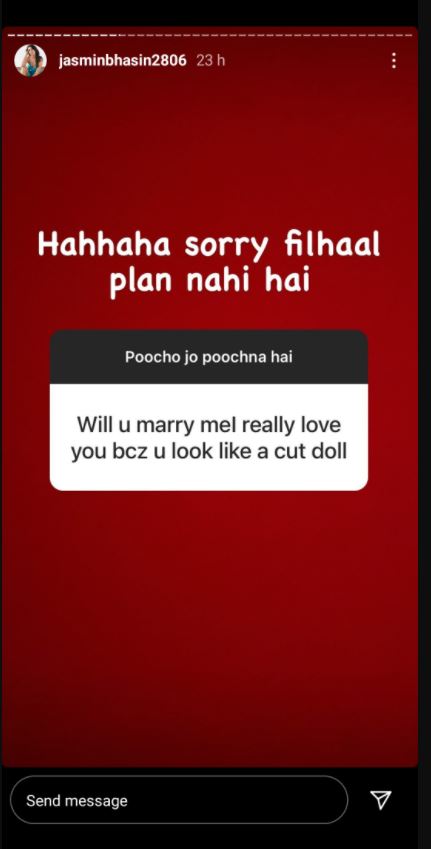 On September 3, 2020, Jasmin Bhasin had shared a super cute picture with her 'best friend', Aly Goni on her IG handle. In the photo, Jasmin and Aly were seen making funny faces for the camera. Alongside it, Jasmin had written, "My BFF and I will be besties forever because we are both too lazy to find a new friend. #StruckWithMe" (Also Read: Mira Rajput Kapoor Relives Delhi Days On 'Shawarma Night With Parents', Gives Glimpse Of Dinner Date) Earlier, in an interview with The Times Of India, Jasmin had opened up on her dating rumours with Aly and had said, "I have always maintained that Aly and I are best of friends, I am not in a relationship with him. For the past two years, I am being called his girlfriend. Earlier, I would laugh off these rumours, but now, they have started to affect me. When I am linked with close friends, it affects my friendship with them, and that's's upsetting." 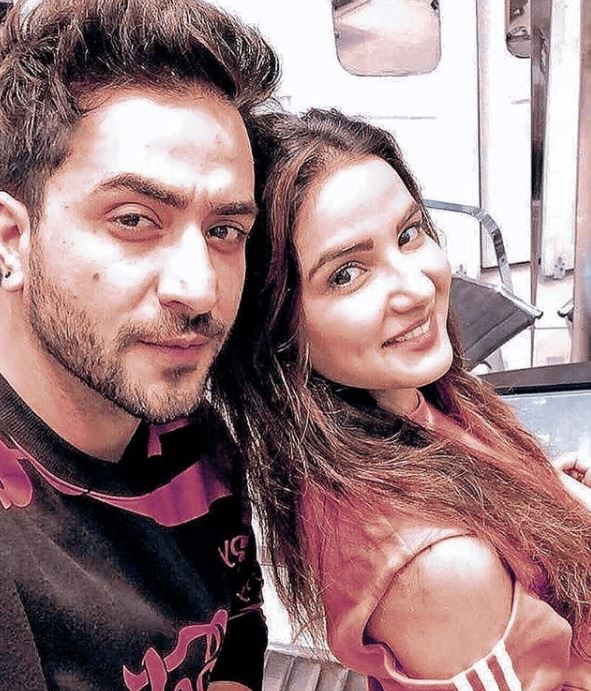 Jasmin had further emphasised on creating her own identity rather than be known as someone's girlfriend and had said, "I am an independent girl, who is working hard to create an identity for myself and I don't want to be known just as someone's girlfriend. We talk about women empowerment, but why is it that instead of appreciating a woman for her work and recognising all her sacrifices and struggles, all we do is tag her as someone's girlfriend? I request people to actually empower and respect women, and not just talk about it." Jasmin had also talked about how the rumours are affecting her friendship with Aly, and had said, "These rumours are affecting my personal life. I am looking for certain qualities in my ideal partner and Aly doesn't meet that criteria for sure." (Don't Miss: Shweta Singh Kirti Shares Dancing Pictures With 'Bhai', Sushant Singh Rajput From Her 'Sangeet' Day)

What are your thoughts on Jasmin and Aly's alleged relationship? Let us know!