Aly Goni posted a beautiful candid click of his rumoured bae, Jasmin Bhasin and extended his support for her in the 'Bigg Boss' house. Scroll down to check out his post!

Aly Goni and Jasmin Bhasin are one the most adored couples of the glamour world, who have always remained tight-lipped about their relationship. The rumours about their affair had gotten heat when the two had participated in the reality show, Khatron Ke Khiladi 9. Their fans had loved their adorable chemistry. The duo's social media PDAs are absolutely adored by their fans. However, Jasmin has always maintained her 'best friends' stance with Aly. (Recommended Read: Irrfan Khan's Son, Babil Shares A Picture Of His Tomb, Reveals How His 'Baba' Used To teach Him)

As per the reports flashed in BollywoodLife, Aly Goni was supposed to enter the Bigg Boss 14 house with alleged ladyove, Jasmin Bhasin but couldn't due to his prior professional commitments. But, like a caring and supporting boyfriend, Aly Goni is not leaving any chance to support his alleged girlfriend, Jasmin Bhasin in Bigg Boss. Scroll down to know more! 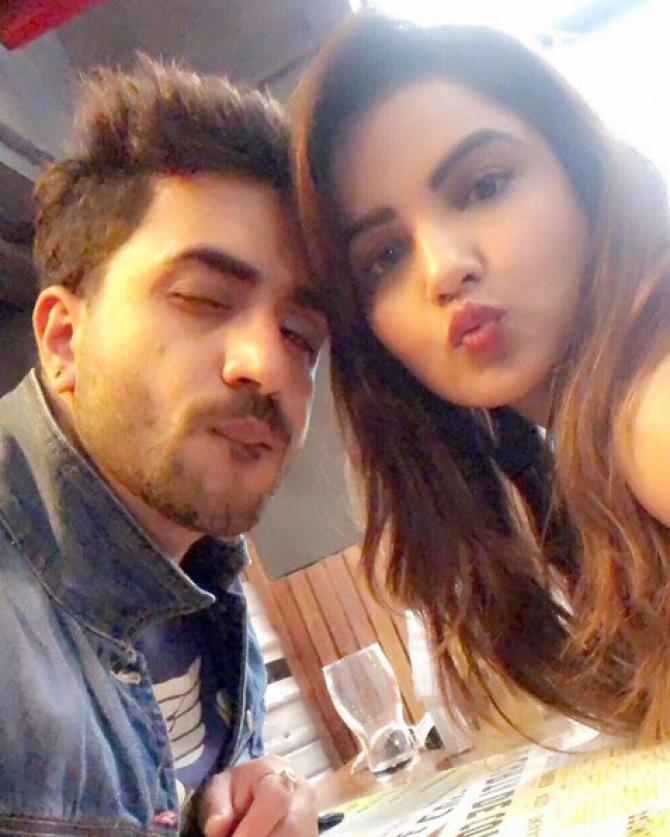 In an interview with Pinkvilla, before entering the Bigg Boss house, Jasmin was asked if she would miss her 'best friend' inside the house. Jasmin was quoted as saying, "If Aly would have come in the show, it would have been really fun because we get along really well. We are super fun together." Jasmin further said, "He chose not to do this show at this point because he had a prior commitment like I had last year and he is going for that. I am sorry for those who are disappointed with not seeing us inside together but I will try and make up for it by entertaining them in Bigg Boss." On the other hand, Aly Goni posted a beautiful candid click of his rumoured bae, Jasmin Bhasin and lauded her for her amazing performance. He wrote, "My strong girl, you're doing amazing. Keep supporting her. @jasminbhasin2806. #jasmin BB14." Check out the picture below: 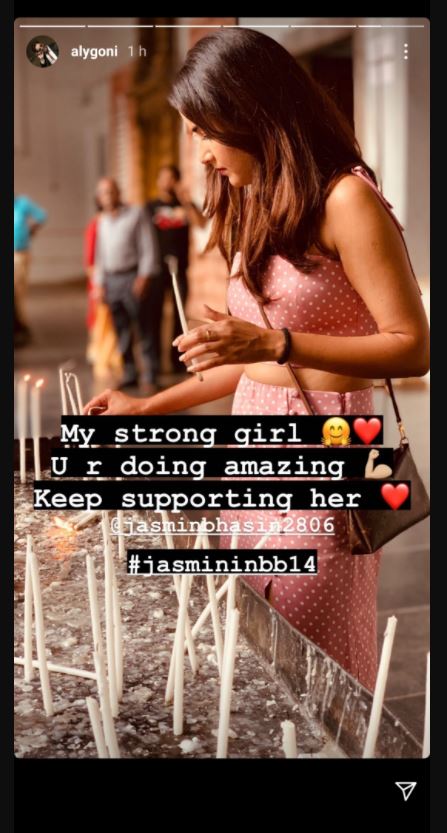 Before Jasmin's entry in the Bigg Boss house, her alleged beau, Aly had wished her good luck in the most adorable manner. Expressing how he is going to miss her and that he wants her to win the show, Aly had written, "I will miss yu J. I want u to win this one @jasminbhasin2806 that's why I don't want ki tu jaldi bahar aaye hahah. Trophy leke aana. I m waiting #jasmininbb14." 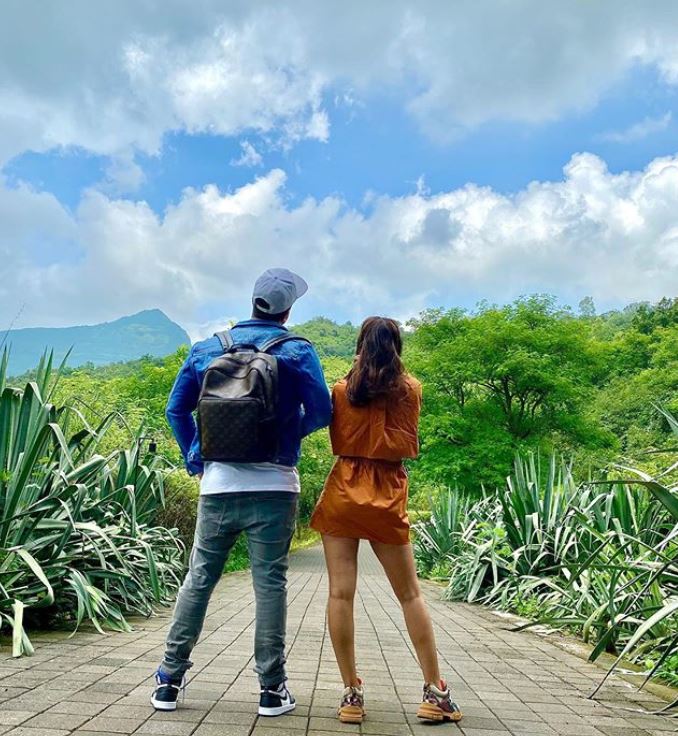 A few days ago, a funny video of Jasmin Bhasin crying in the Bigg Boss house had surfaced. Jasmin was crying and throwing tantrums because she had to wash clothes in the Bigg Boss House. And her rumoured beau, Aly Goni had the perfect reaction! Reacting to Jasmin Bhasin's cute tantrums, Aly Goni had shared the video on his IG stories and had offered to buy her a washing machine. Sharing the video, Aly had written, "@colorstv please I want to gift her a washing machine. Please" followed by laughing and heart emojis. 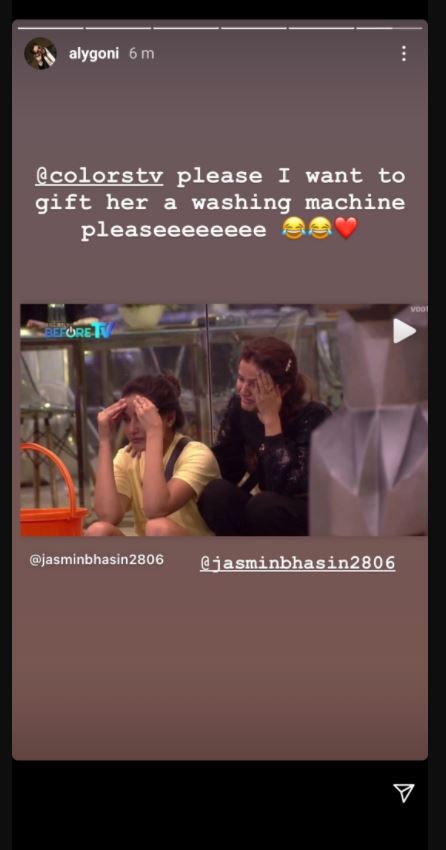 Reacting to her dating rumours with her 'best friend', Aly Goni, in an interview with the Bombay Times, Jasmin had stated, "I am not in a relationship with anybody as of now. I have always planned my life and I don't intend to concentrate on anything except work for the next couple of years. Juggling too many things can disturb the balance and throw your personal or professional life off track." (Also Read: Neha Kakkar And Rohanpreet Singh Finally Confess Their Love, To-Be Bride Makes Demand Before Wedding) 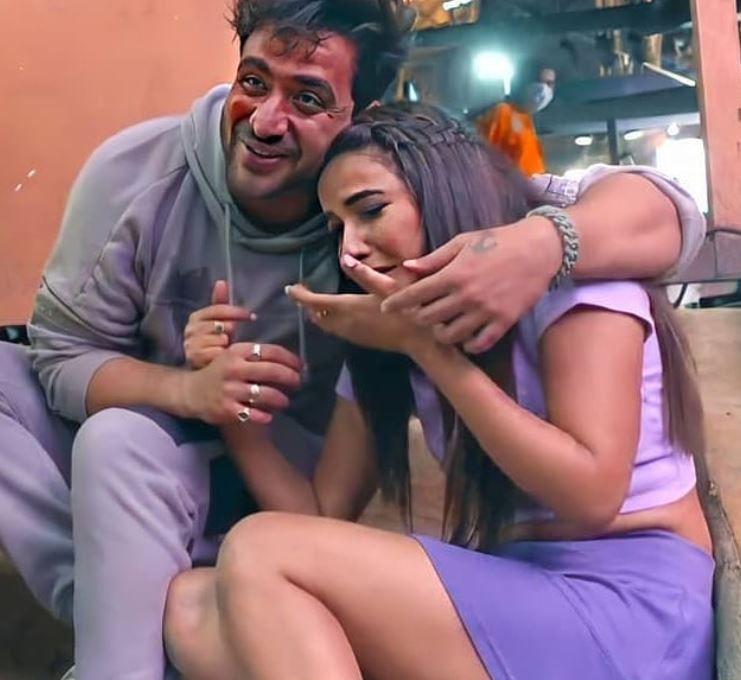 On June 28, 2020, Jasmin had celebrated her birthday, and Aly had shared a sweet note for her to make her day super special. He had taken to his Instagram handle and had posted two beautiful pictures with her. Alongside it, he had written, "Happy birthday Jasmin. Aisi best friend kisi ko na mile kyunki I want to be the lucky one. I can't thank you enough for whatever you have done for me. It's priceless. Please always stay by my side I feel strong. Love u sooo much. Allah teri saari khwahishen poore kare.. Ameen." Jasmin had commented on Aly's post and had called him her 'special person'. She had written, "Awwwwww, tu bahut special hai," followed by a heart emoji. (Don't Miss: Rocky Jaiswal Is Elated As Hina Khan Is Back On BB14, Shares A Glimpse Of His Sleeping Beauty) 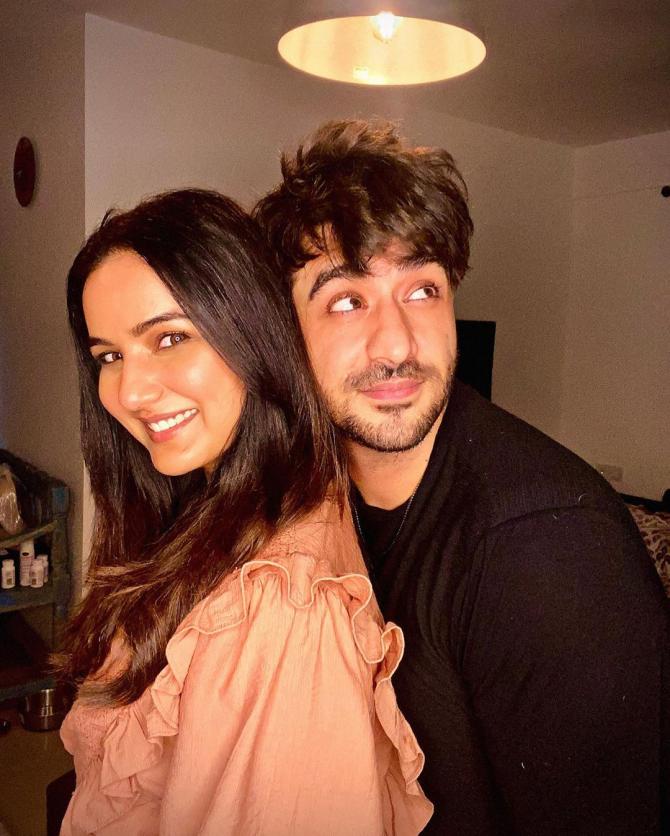 Who are you supporting in Bigg Boss season 14? Share with us! 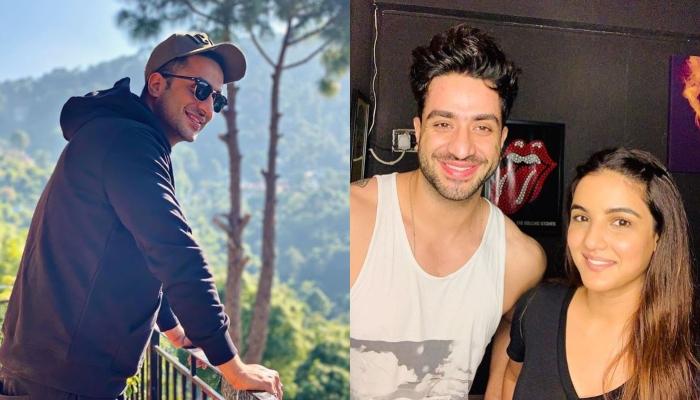 Ever since Jasmin Bhasin's name was confirmed for Bigg Boss 14, there were strong rumours that her alleged beau, Aly Goni might also be a part of the show to provide the much-needed masala! The alleged couple has always remained tight-lipped about their relationship, but their affection, PDAs and support for each