Sachin Tendulkar is associated with the term, ‘Master Blaster’ forever and he is not only considered the 'God of cricket', but is also worshipped like one. As Australian cricket commentator and former cricketer, Matthew Hayden once said, "I have seen God, he bats at no. 4 for India", everyone took his word for it and believed in what he said. There was, is and will never be someone even close to what Sachin is, in the history of cricket. With his every win, he gave us the pride to be happy in the team’s victories and in his decades-long career, he had given us countless reasons to smile.

Just like Sachin Tendulkar is deeply adored by millions of his fans, he is the reason behind the smiles of his wife, Anjali Tendulkar, and their children, Sara Tendulkar and Arjun Tendulkar. While everyone knows Sachin isn’t easily stumped on-field but it was Anjali, who did the unimaginable and together, the couple had knitted a beautiful life with their kids. It was in 1995 when Sachin and Anjali had tied the knot and were blessed with their first child, Sara in 1997 and their son, Arjun was born two years later in 1999. After Sachin retired from international cricket, he is spending quality time with his family at their home in Bandra, a suburban neighbourhood in Mumbai. ‘Ek Mahal Ho Sapno Ka’ perfectly defines the Tendulkar residence at Perry Cross Road in suburban Bandra (West), which was bought by Sachin Tendulkar in 2007 for INR 39 crore. The sprawling mansion of the Tendulkars was built in 1926 and was originally known as ‘Dorab Villa’. Spread over 6,000 sq. ft., the Tendulkar family moved in in 2011, after four years of renovation. Sachin and Anjali’s abode has multiple floors, a terrace and two basements. The house opens with a huge dark wooden door with geometric carving, in contrast to which, there’s marble flooring with potted plants set on each side of the entrance. 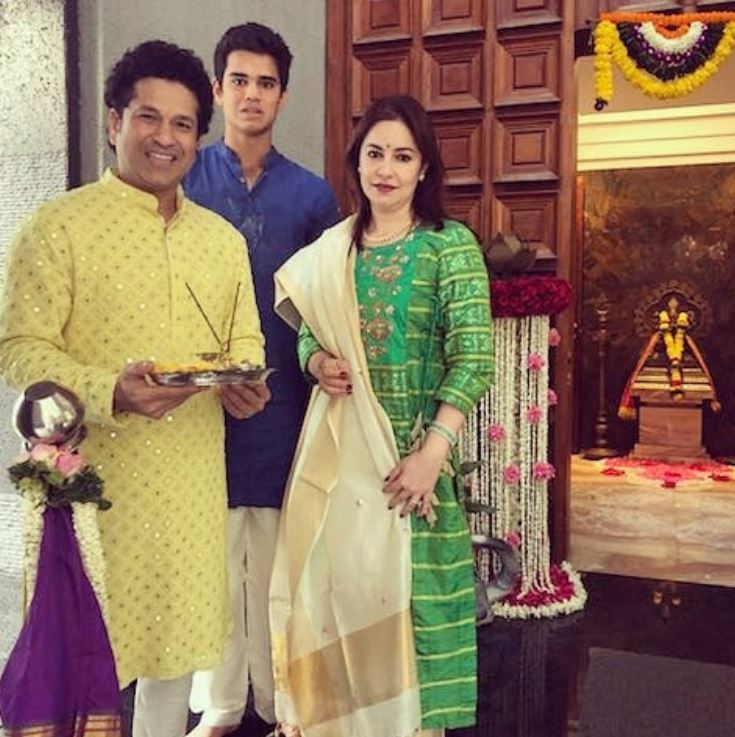 Then comes the magnificent living room in the shades of white and brown. The space that gives warm and inviting vibes includes earthy plush couches with colour cushions to make it more vibrant. The glossy cream-coloured marble flooring is accentuated with a large leather armchair, multiple ivory lamps, and all of Sachin Tendulkar’s awards neatly framed across the room. The living room expands to the dining area with mahogany brown leather chairs and a teak wood dining table. 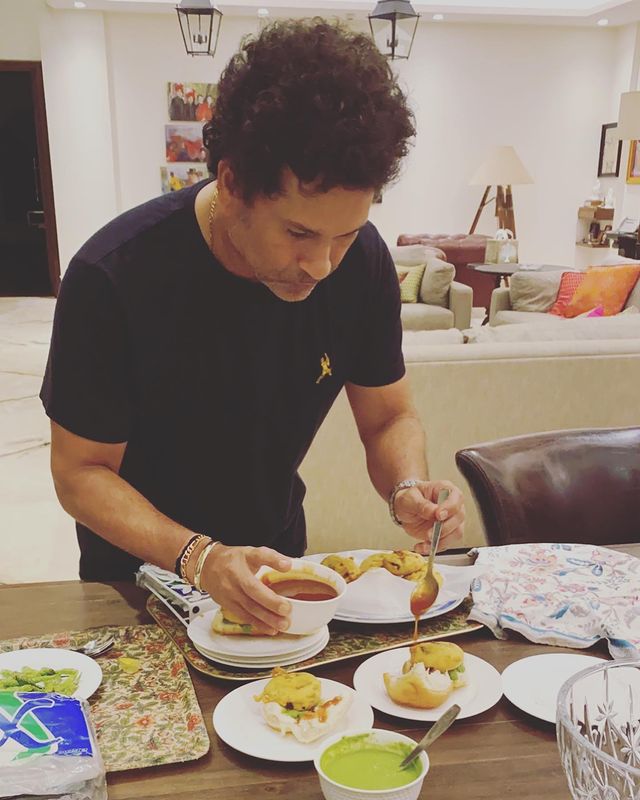 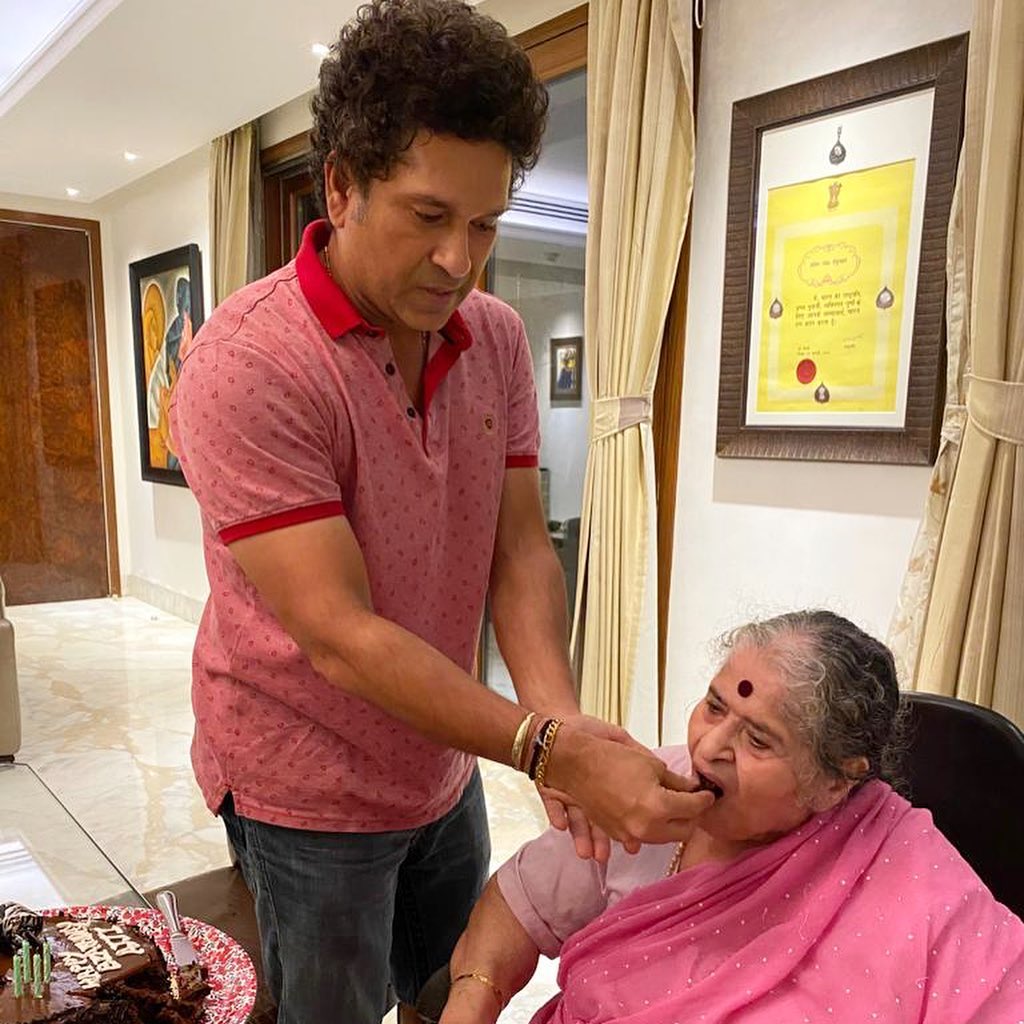 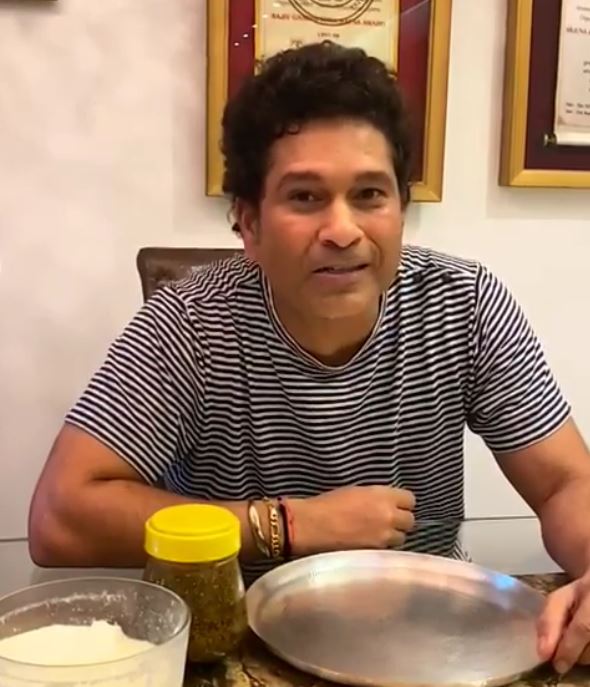 Looks like Sachin Tendulkar’s favourite space in his house is the garden area, where he’s often spotted relaxing and if you’ll take a look at the space, it will surely become your favourite too. The garden, giving major serene vibes, features rows of palm trees, a small pond and tropical plants that make it a perfect place to enjoy the Mumbai rains. The cane wooden furniture set up in the corner of this tranquil garden space allows the family to enjoy and spend quality time together. Just like the interiors of his luxurious mansion give warm vibes, the terrace adds a luxe feel to the space with palm trees and vines from the backyard adding to the greenery. And it is textured with grey walls, making it a soothing space for yoga or meditation sessions. 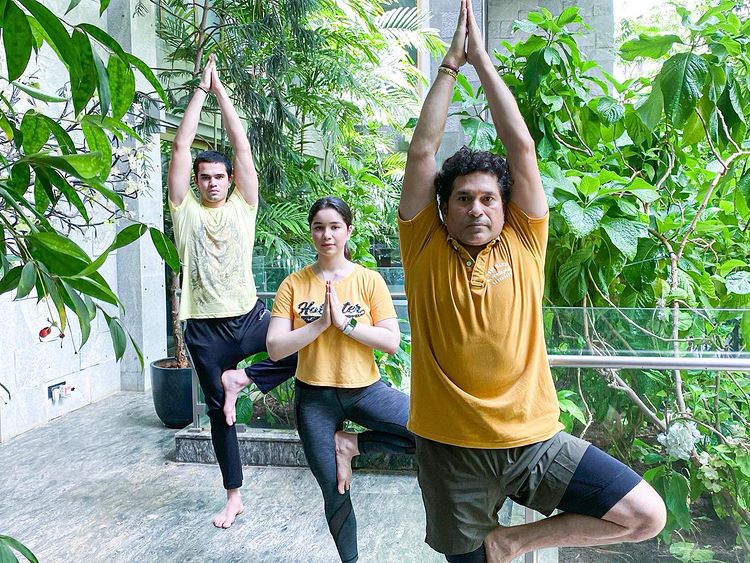 Sachin Tendulkar’s living room has traditional high arches and an impressive art collection, including detailed artworks in the shades of yellow, green and black. This corner of the Tendulkar home is completed with glossy marble flooring and Turkish carpets, accentuated with modern wooden lamps and plush couches in terracotta. One of the washrooms in their house features grey ceramic tiles, high ceilings with wooden panelling features and a jacuzzi. The abstract art helps brighten up this space of their house. Their kitchen is a dream of any home chef as it features a modern look with bright orange cabinets, granite counters in black and large windows, providing the perfect light setting to cook in this spacious area. 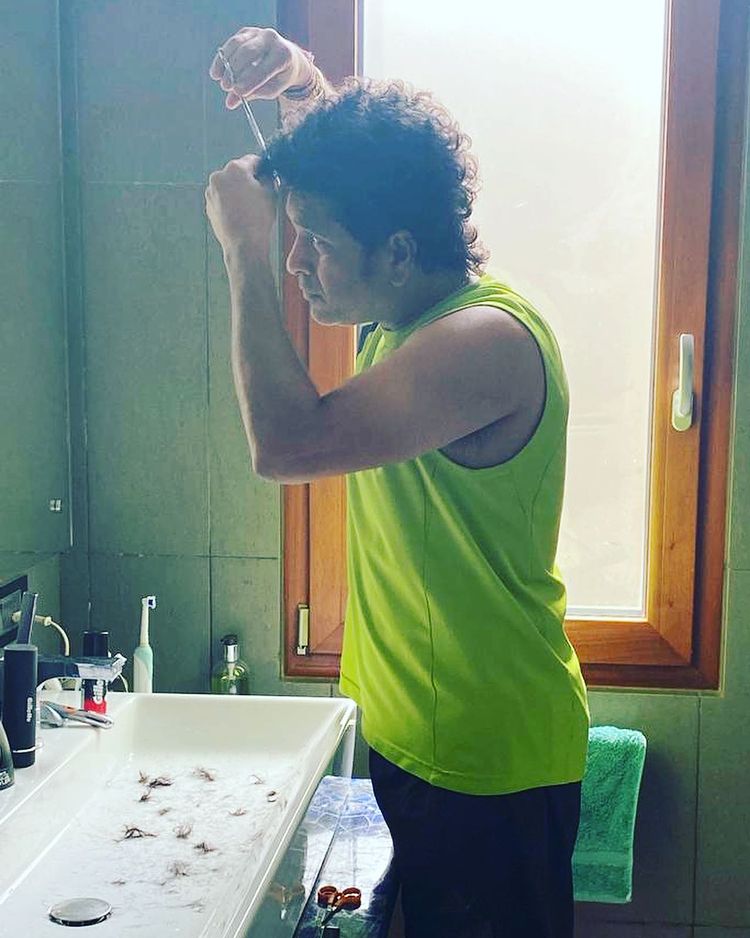 Other than their sprawling bungalow at Perry Cross Road, Sachin Tendulkar and Anjali Tendulkar are proud owners of an apartment at the luxurious Rustomjee Seasons in Bandra-Kurla Complex, Mumbai. Located close to where Sachin has spent his early years, this 1,600-square-feet apartment had cost the couple INR 7.15 crore in 2018 and is registered in Anjali’s name. The apartment comes with a carpet area of 1,459.38-square-feet and two-car parking. The showcase pictures of the apartment in Rustomjee Seasons, designed by Singapore-based designer David Tay, is a tasteful display of aesthetics and gives an inside tour of Sachin and Anjali’s 1,600-square-foot flat. 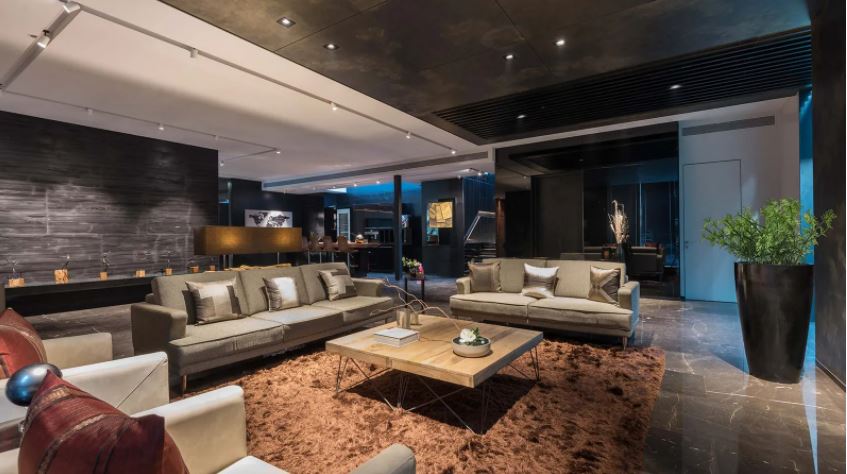 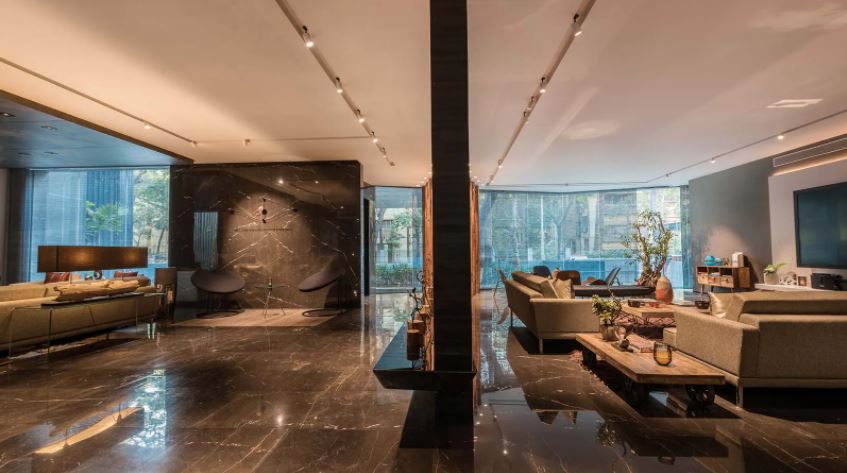 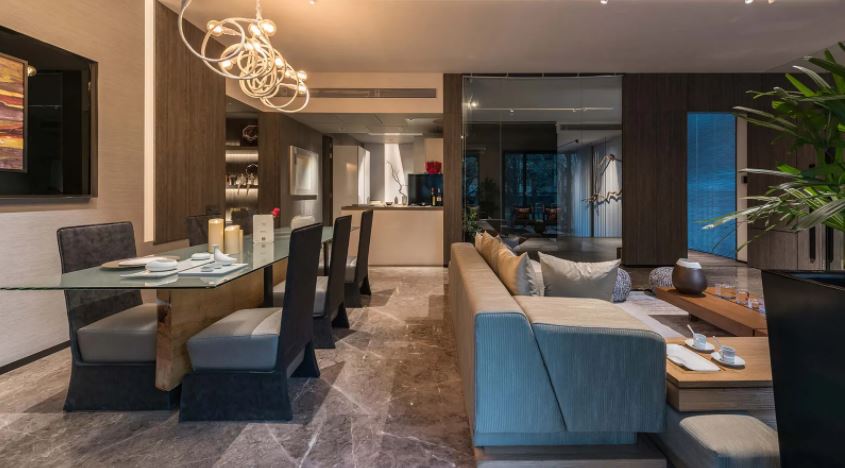 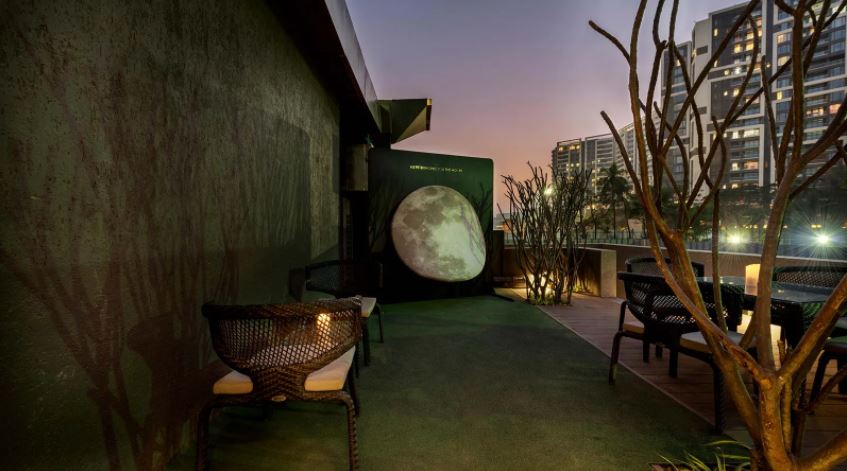 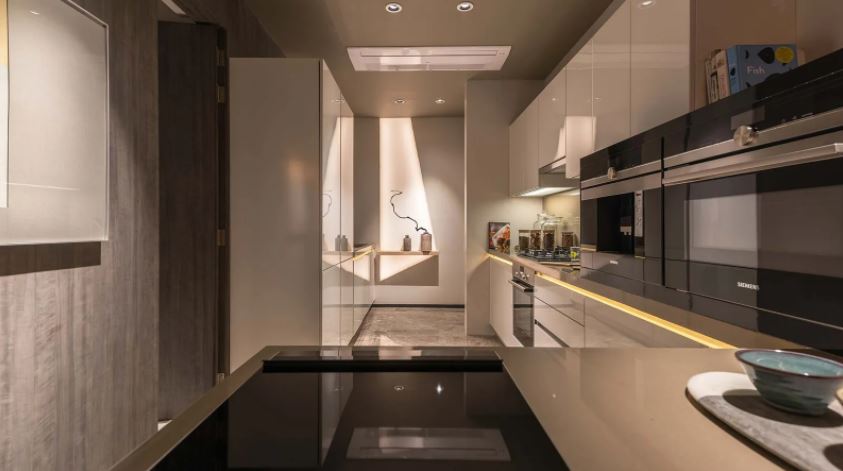 Also Read: Inside Tour Of Varun Dhawan And Natasha Dalal's New Home, His Mother Karuna Dhawan Did The Interiors

Way back in 1990 when a 17-year-old young boy, Sachin Tendulkar had seen Anjali Mehta for the first time at the Mumbai airport, and just how most love stories begin, they were struck by the Cupid on first sight. While Sachin was then making his mark in the cricket world, Anjali couldn’t resist his ‘cute looks’ when she first saw him. However, Sachin being a shy guy didn’t make the first move and it was Anjali, who had somehow managed to get his phone number. And as fate would have it, Sachin had picked up the call and then his story of the greatest and unbreakable partnership with Anjali had begun! Four years after dating, Sachin and Anjali became each other forever. Anjali Mehta had married the cricket legend Sachin Tendulkar, so the efforts she had to make to know the sport better to speak the same language as him and the sacrifices she had made to help him make this far in his career are inspiring and commendable. A doctor by profession, Anjali had decided to take a step back in her career to raise their family and let her man focus on the game is what we call selfless love. 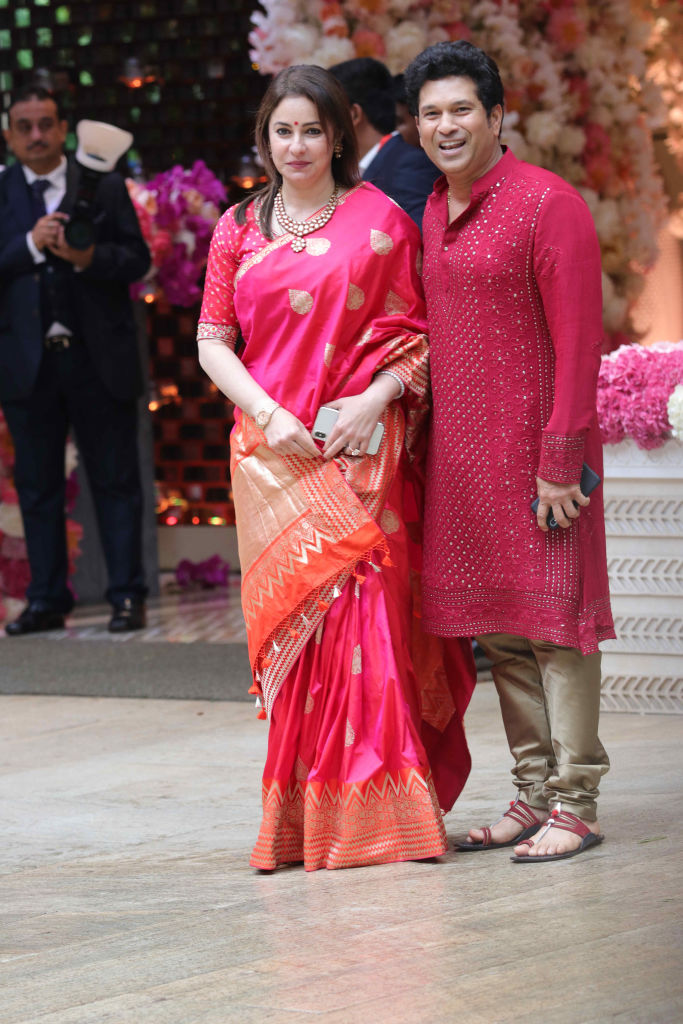 During his farewell speech at the Wankhede Stadium in 2013, an emotional Sachin Tendulkar stated, “I know Anjali being a doctor, there was a wonderful career in front of her. When we decided to have a family, Anjali decided to step back and say ‘you continue with your cricket and I’ll take responsibility of the family’. Without that, I don’t think I would have been able to play cricket freely and without any stress. Thanks for bearing with all my fuss and frustrations and all sorts of rubbish I’ve spoken. You’re the best partnership I’ve had in my life.” 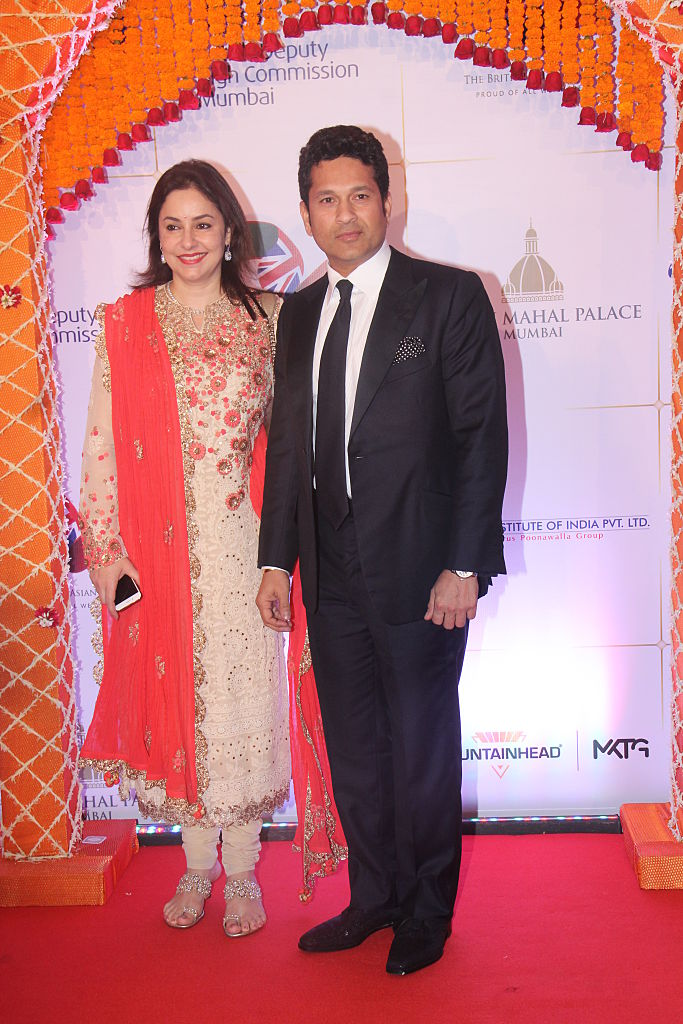 Which spot did you like the most at Sachin Tendulkar and Anjali Tendulkar’s abode? Let us know!