Iconic Indian fashion designer, Sabyasachi Mukherjee's home in Kolkata is the epitome of a dream house. Sabyasachi's house reflects his eternal love for textile, fashion, and art in an alluring way.

Sabyasachi Mukherjee hailed from a middle-class Bengali family and was born on February 23, 1974. However, none of his family members had ever thought in their wildest dreams that he would be recognised as one of the most revolutionary and successful designers of all time one day. The National Institute of Fashion Technology's graduate got his first major break when he won the "Grand Winner Award" at the Mercedes Benz New Asia Fashion week. Since then, there's no looking back for him.

Sabyasachi Mukherjee is one of the Associate Designer Members of the prestigious Fashion Design Council of India. From creating some breathtaking costumes in films like Guzaarish, Raavan, English Vinglish, Baabul, Raavan, and many more to being every women's favourite label for her bridal trousseau, Sabyasachi is one of the most prominent designers of India. Also, one look at Sabyasachi's house in Kolkata, and you'll be stunned to witness the connections and theories behind every colour and pattern. Here's a look into Sabyasachi Mukherjee's mansion in Kolkata!

Himesh Reshammiya And His Wife, Sonia Kapoor's Glass Penthouse Is What Luxury Feels Like 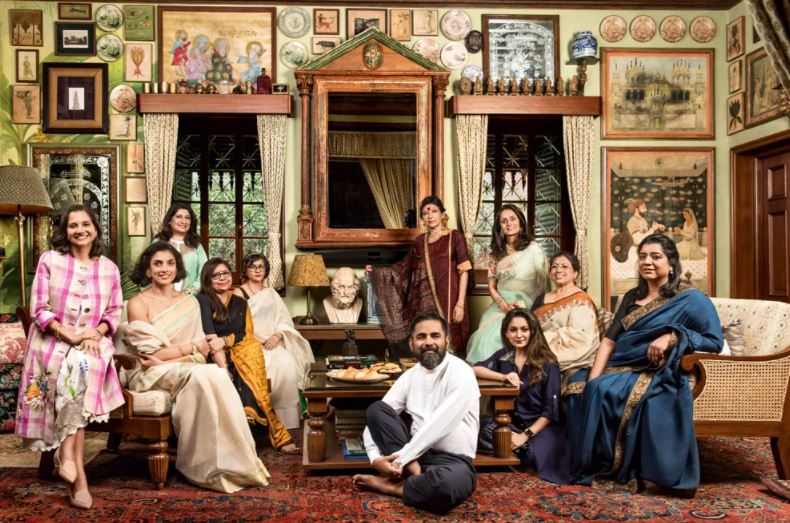 Walking through the doors of India's elite designer, Sabyasachi Mukherjee's house in Kolkata is reportedly spread around 7,250-square-foot and is charming from all angles. From Burma teak staircase to a wooden showcase filled with envy-worthy vases, the road to the living room is filled with some delicate pieces of pure art. The flooring is done with the famous yellow and white Jaisalmer marble. The rugs in different parts of the mansion are from ABC Carpet & Home, New York. 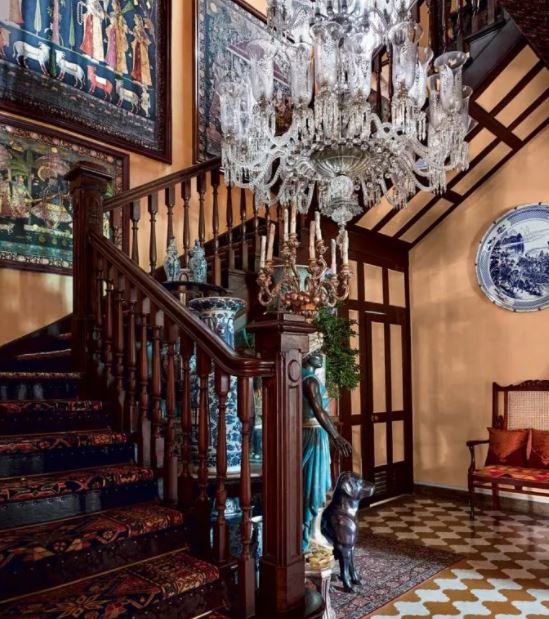 Out of all the masterpieces in the entrance hall, the one thing that overshadows everything is the iconic hand-cut crystal chandelier from F&C Osler. One look at the hall, and it seems like the royal staircase is wrapping itself around the chandelier that goes up towards the sky. The Burma teak, which is often regarded as the best teak wood globally, is the first thing that comes in front of people when they enter Sabyasachi Mukherjee's Kolkata home. The staircase made of Burma teak at the entrance of the lobby is simply mesmerising.

Once in an interview with AD, Sabyasachi Mukherjee had talked about his 7,250-square-feet home in Kolkata. The designer had recalled the time when he used to live in a tiny house. Sabyasachi had said, "I've been living in a shoebox of a studio apartment for the last few years." 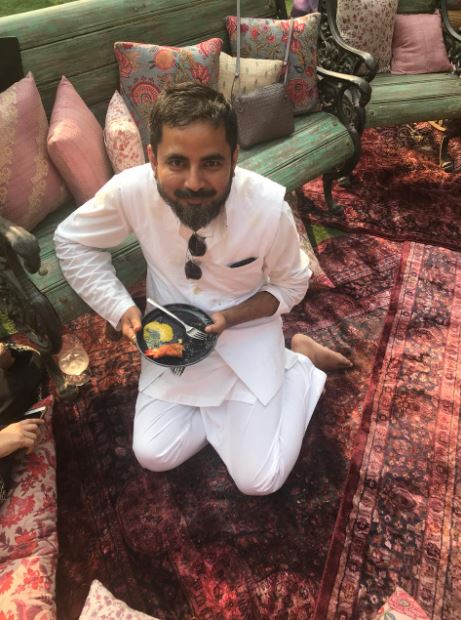 The living room corner exhibits a poetic vibe because of the muslin-shaded lamps and some indoor plants. The water pipes around the area are creatively painted to make them look like the trunks of palm trees. 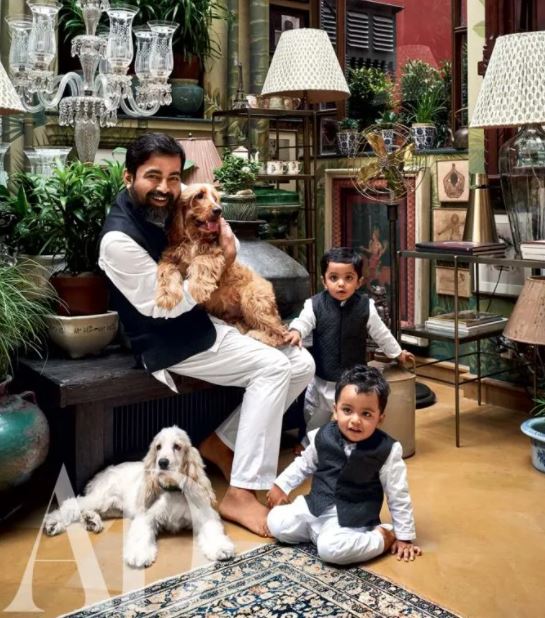 In addition, the living room features pleasing jade green walls that give you a slight reflection of indoor gardens. Right at the centre of the living room, we can spot an alluring Portuguese mirror along with some Dutch pottery and ginger jars.

However, it's hard not to fall in love with the rustic ambience of the living room, created by cane details of the centre table and sofa set. The paintings on the walls add that extra touch of creativity and art, for which Sabyasachi is renowned. 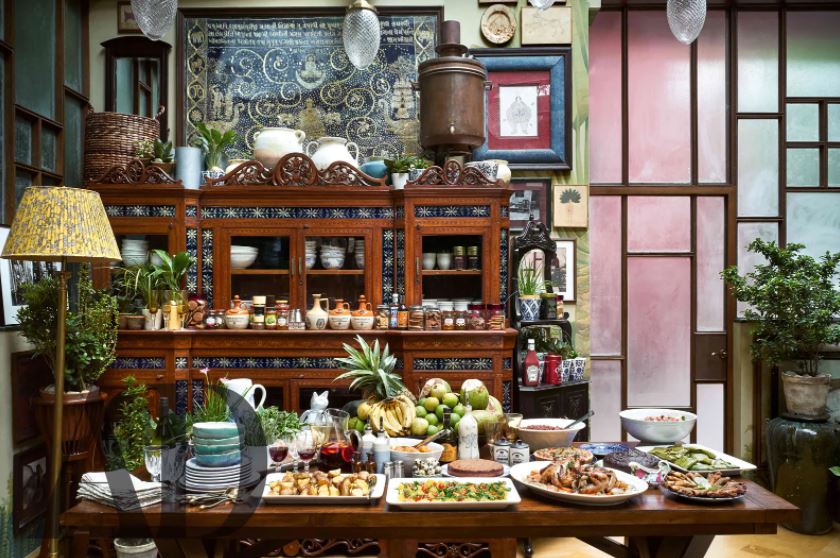 The kitchen is without a doubt the heart of any house, and when we are talking about the kitchen of perfectionist Sabyasachi Mukherjee's house. Then there's hardly any doubt that we will have treats not just for our tastebuds but for our eyes too. The kitchen walls are inspired by the tropical vegetation and are hand-painted by 43 artists of the Sabyasachi Art Foundation. Even the pipes of the kitchen are painted in the colours of flora to maintain that tropical essence. A breakfast room-cum-conservatory is attached to the kitchen, which is an entirely different vibe in itself. A lovely crockery cabinet and an heirloom in the breakfast room speaks about the elegance Sabyasachi has prioritised in his entire home. The breakfast room features cream-coloured walls and a dark wooden cabinet.

The cabinet is the home to some beautiful crockery, silverware, and special ingredients. Other pieces of the room feature a disused samovar, a range of pottery, and a seagrass basket. The table at the centre is reportedly from Pottery Barn.

However, there's no doubt that the large dining table is the best thing in the entire room, as it can hold tons of things and is extremely helpful during crowd rush parties at his home. 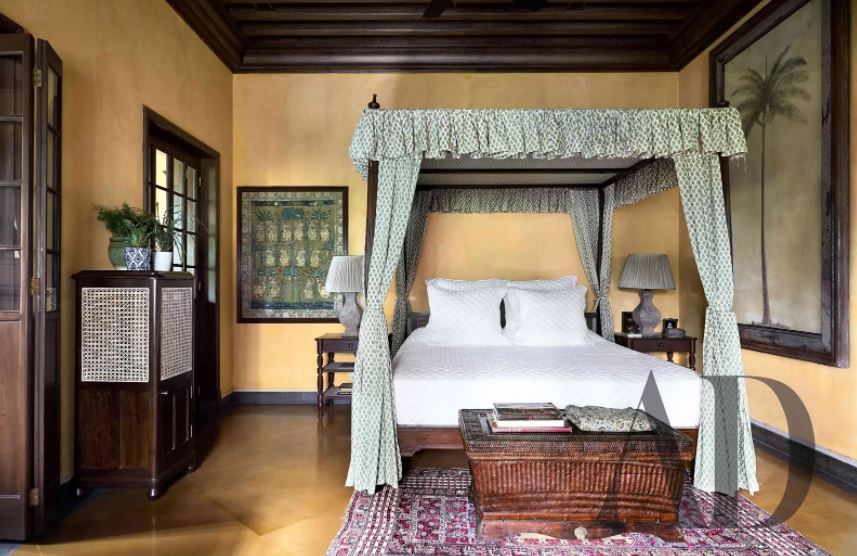 A magnificent four-poster bed accompanies the master bedroom of Sabyasachi Mukherjee's Kolkata home. The first thing that catches everyone's attention is The Great Eastern Home's rattan trunk, right at the foot of the bed, and it is being used creatively as a table. The royal bedroom also features a pichhwai, rendering of a date palm, linen from Pottery Barn, and some hand-printed muslins. Everyone is aware of Sabyasachi Mukherjee's eternal love for nature, and it is visible in different corners of his house in Kolkata. This is why his private garden filled with lime and banana trees is not a surprise for anyone. 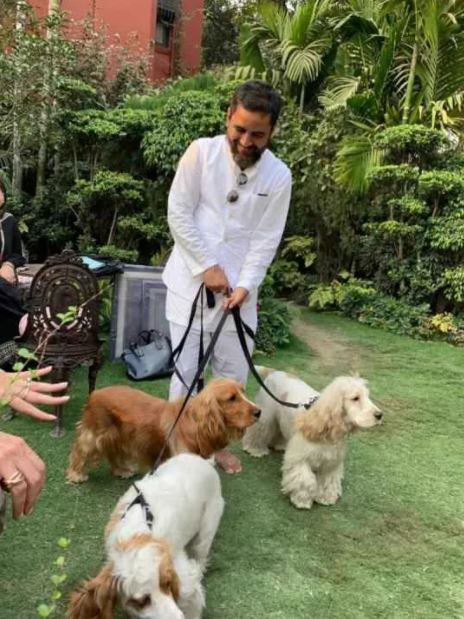 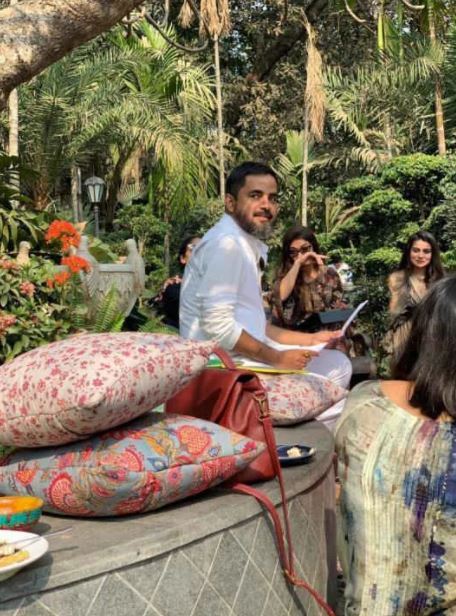 The designer has transformed the serene garden into a magical venue for Sunday brunch. Sabyasachi Mukherjee had given his personal garden a unique bohemian makeover with the help of some timeless and elegant cane furniture, Turkish rugs, and printed pillows. Also, the garden feature reportedly 4,000 plants.

Talking about the idea behind the artistic touch in his living room. Once in an interview with AD, Sabyasachi Mukherjee had stated that he had always wanted a cramped living room. Because of his love for antique and textile. The designer had explained that his living room opens out into his private garden, which is why he had chosen a jade green colour for the living room walls. He had said, "The living room opens out to a lush tropical garden, and it was important for me to get the outdoors inside. So the colour of choice was vintage jade green." 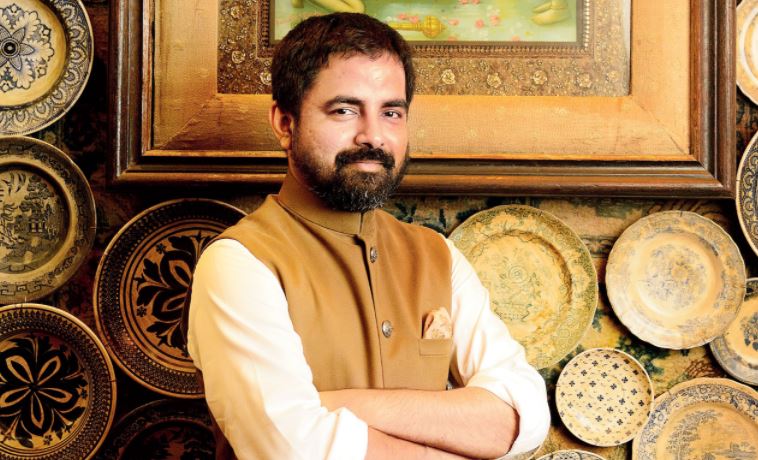 When Sabyasachi Mukherjee was asked about the theme behind his Kolkata home, the designer had shared a precious tip and had stated that clever layering is the backbone of every beautiful house. Sabyasachi had explained, "Though I am a minimalist at heart, my outward physical manifestation is that of a maximalist. One has seen proof enough in all my retail stores. The trick to doing beautiful cluttered homes lies in the art of clever layering—and also stocking up on art, antiques, bric-a-brac, textiles, furniture, and kooky curios that can be gloriously assembled."

It's hard not to admire and, at the same time, envy Sabyasachi Mukherjee's home in the city of joy, Kolkata. From drooling over his love for vintage accessories to embracing his love for nature, Sabyasachi's mansion is indeed his purest reflection and also one of the best celebrity houses in the country.

Himesh Reshammiya And His Wife, Sonia Kapoor's Glass Penthouse Is What Luxury Feels Like