Milind Gunaji's son, Abhishek Gunaji, tied the knot with his longtime-girlfriend, Radha Patil on December 17, 2021. And now, the couple has hosted a wedding reception in Mumbai.

Veteran actor, Milind Gunaji is a popular name in the Bollywood industry who has won millions of hearts with his acting prowess. Recently, his son, Abhishek Gunaji's wedding with his long-time girlfriend, Radha Patil had made the headlines. After enjoying the intimate wedding, the newly-wedded couple hosted a starry reception bash in Mumbai on December 22, 2021. And the pictures from the same are doing rounds on the internet.

It was on December 17, 2021, when Abhishek Gunaji, had tied the knot with his long-time girlfriend, Radha Patil. The couple had got married in an intimate wedding set-up, in front of their family members and relatives. For the unversed, Abhishek was an I.T. engineer but had fallen in love with the concept of filmmaking and had soon decided to venture into filmmaking. Talking about his ladylove, Radha works in the pharma industry.

Nawab Shah Expresses Desire To Have Babies With Pooja Batra, Reveals He Proposed In Front Of Family

Unseen Picture Of Pooja Batra And Nawab Shah From Their Pre-Wedding Function, Look Royal Together

Recommended read: Mira Rajput's Christmas Tree Gets Lost, Her Kids, Misha And Zain Decorate A New One At 'Last Minute' 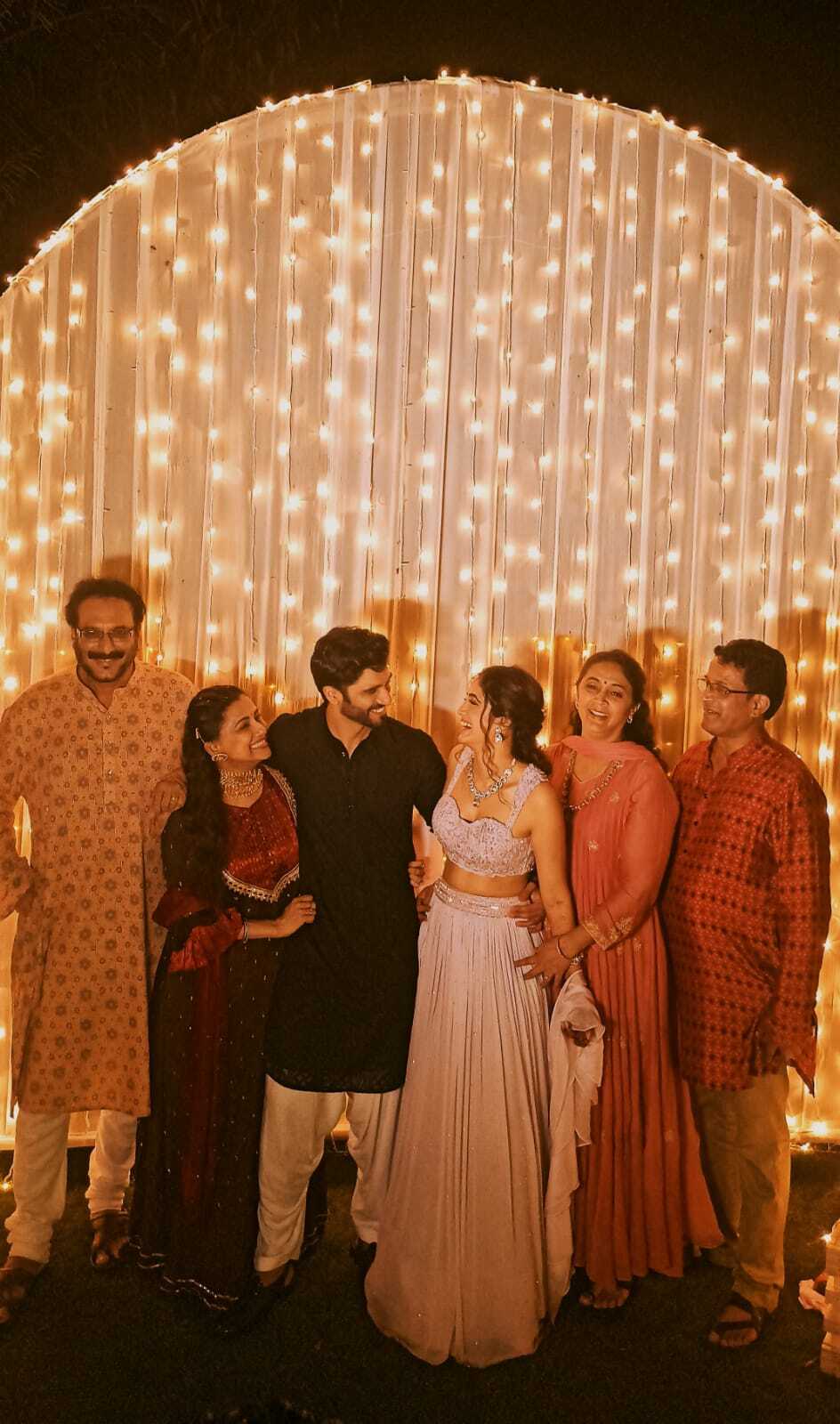 A few moments back, we stumbled upon pictures from Abhishek and Radha's grand wedding reception. In the pictures, we can see some of the prominent faces from the Indian film industry showering the newlyweds with love and blessings for their new beginning. Reportedly, the reception was held in Mumbai's luxurious hotel, Taj Lands End, keeping the COVID protocols in consideration. 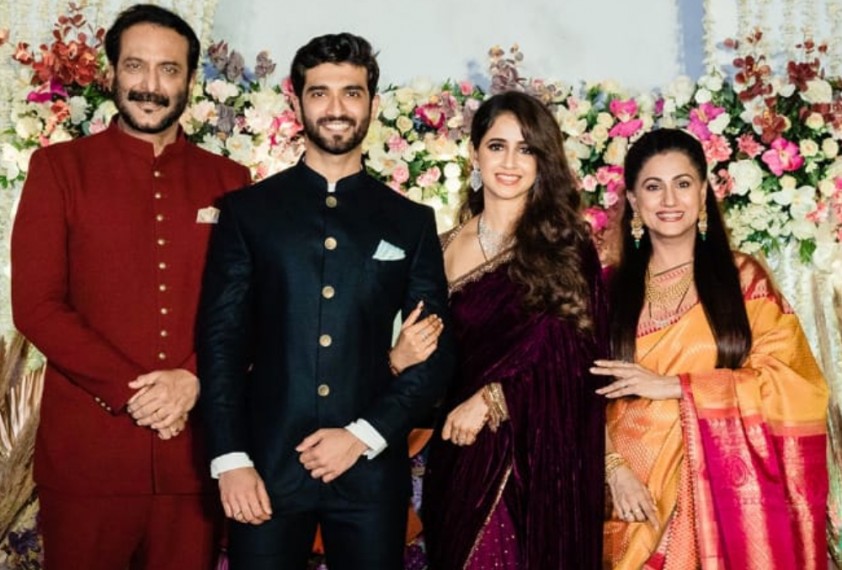 The starry reception bash was a gala event, which was filled with a lot of fanfare, peppy music, scrumptious food and fun-filled experiences. The who's who from the politics and film fraternity including Jackie Shroff, Aditya Thackeray, Rohit Rajendra Pawar, Ranjit Pawar, Govind Nihalani, Satish Shah, Spruha Joshi and Subodh Bhave attended the reception.

According to reports, Abhishek Gunaji had tied the knot with his longtime girlfriend, Radha Patil, in a temple wedding in Malwan on the night of December 17, 2021. Some pictures from Abhishek and Radha's wedding ceremonies had surfaced on social media, and the couple had looked stunning in their respective attires. It was a traditional Marathi wedding, and one look at Abhishek and Radha's respective wedding attires would surely bring a wide smile to anybody's face. While on one side, Radha had looked the prettiest in a green Nauvari saree, on the other side, Abhishek could be seen donning a lovely pink-coloured sherwani.

Also read: Sargun Mehta Reveals Why Ravi Dubey Postponed His Birthday Dinner With Her For Another Girl 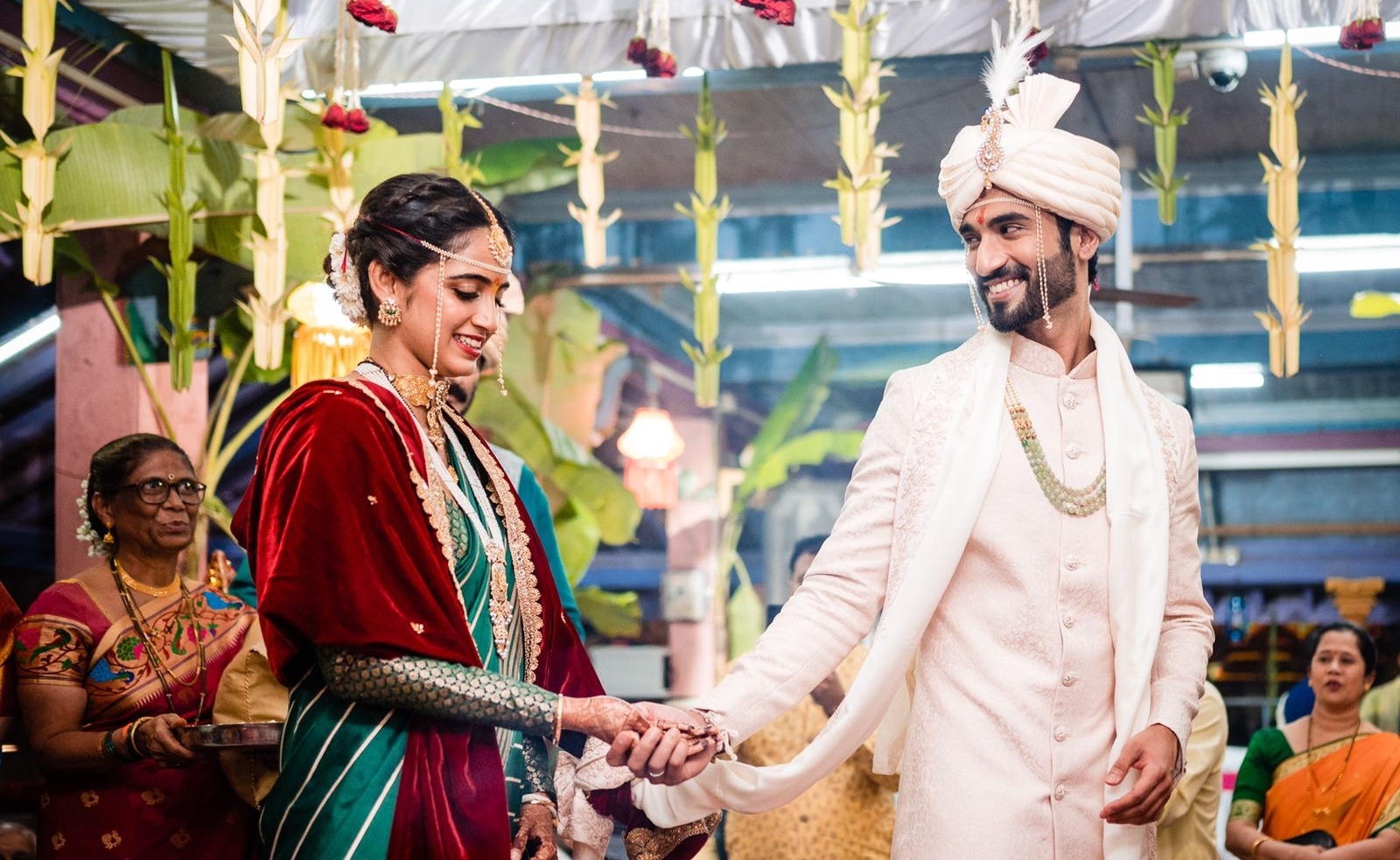 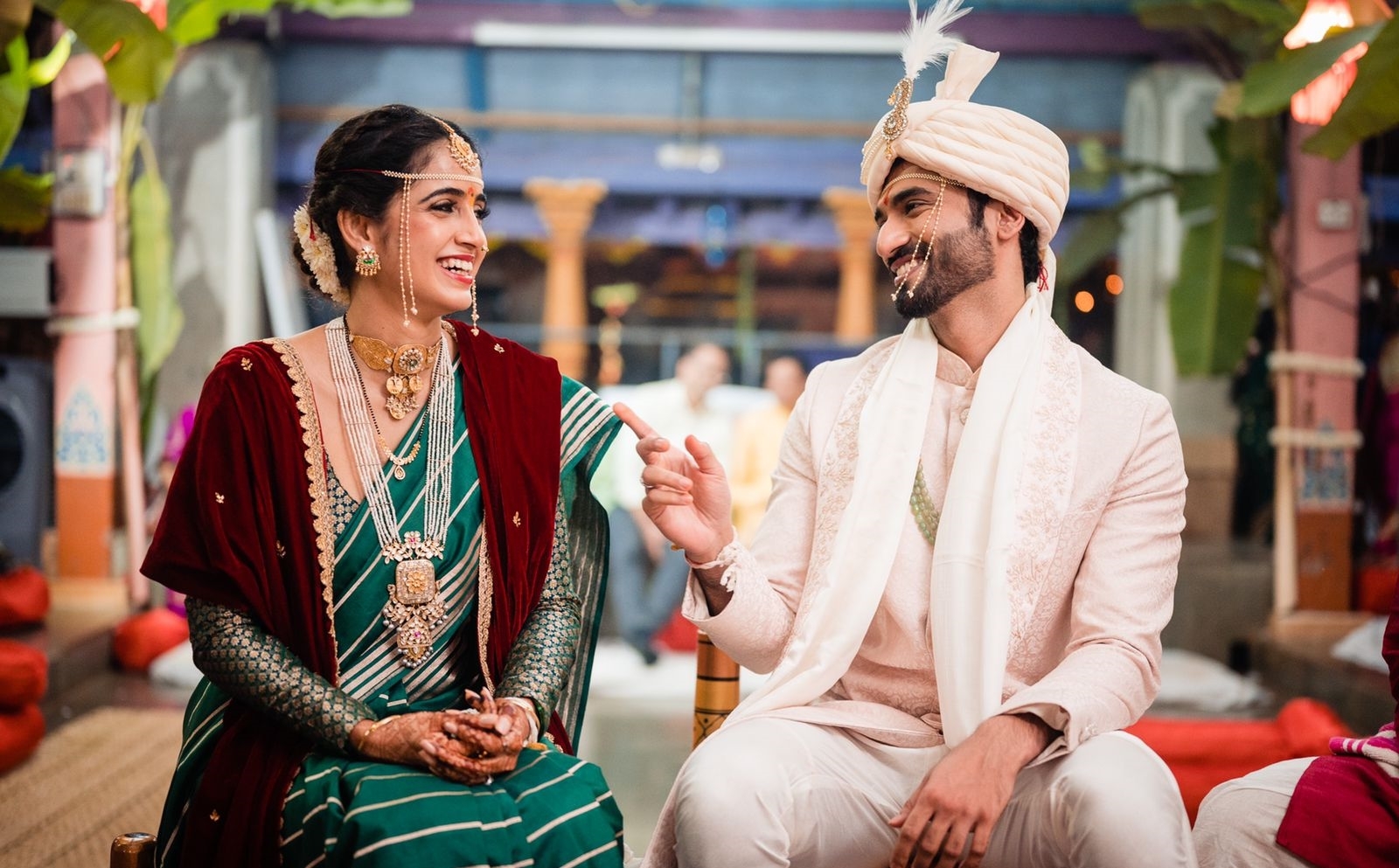 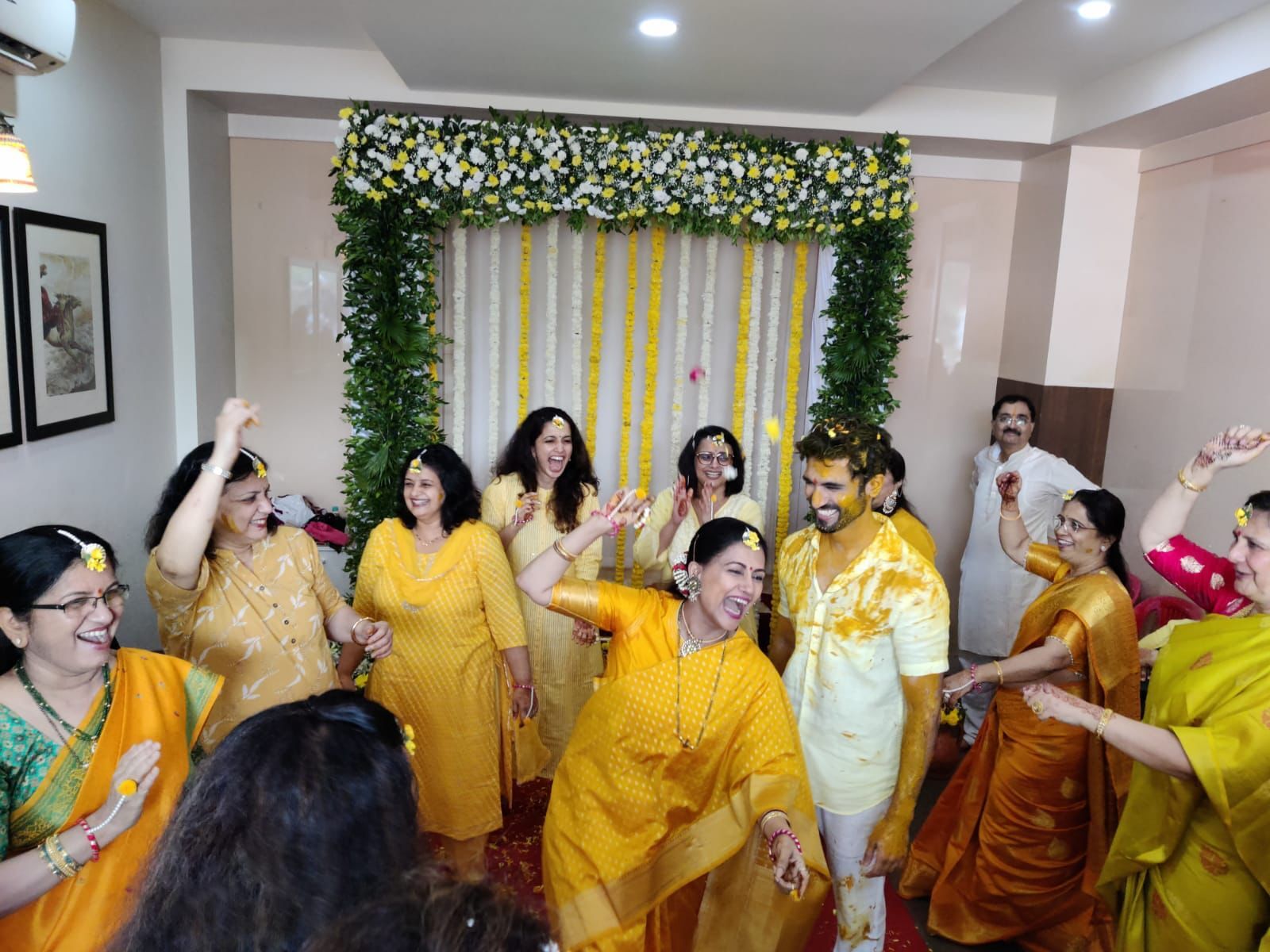 In an interview with the Mid-Day, Abhishek Gunaji's father, Milind Gunaji, was asked to open up about his family's decision to go for an intimate traditional wedding for his son. Answering this, Milind had clearly stated that he and his entire family is extremely cultural in their values and always prefers heritage and culture over anything else. He had explained:

"We as a family are quite rooted in our culture and heritage. Hence we choose to have a private ceremony in Walawal, Malwan. I have always promoted the Indian heritage and beauty in our landscapes, rehabilitation of forts, and tourism of Maharashtra." 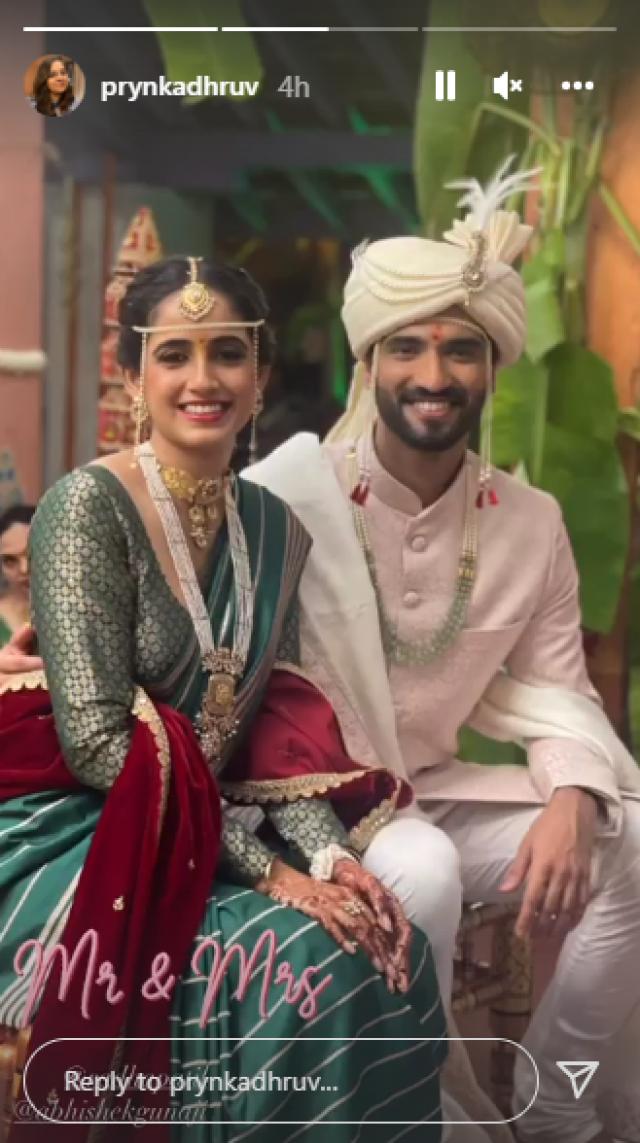 In the same interview, Milind Gunaji had also added that he and his son, Abhishek Gunaji had wanted to send out the strong message that the beautiful destinations in Maharashtra were simply second to none. Reflecting on their immense love with the traditional values of Maharastra, he had further said:

"We wanted the wedding to be in the most traditional way. We wanted to give a strong message that destinations in Maharashtra are unparalleled to any other destination wedding location in India." We wish the newlyweds a very happy life ahead!