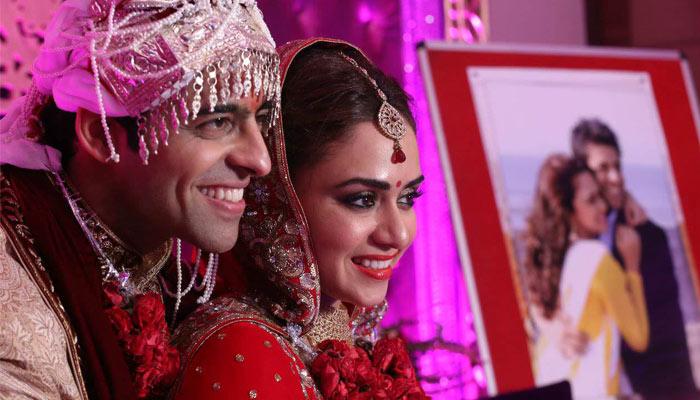 Sometimes, love just walks in on you and you accept it. The same thing happened with this jodi who won the dance reality show, Nach Baliye season 7. Yes, we are talking about the gorgeous couple, Himmanshoo Malhotra and Amruta Khanvilkar. You might have been left captivated by their dance performances, but their love story will make you go weak in the knees. It is a story of how true the phrase ‘opposites attract’ is.

The couple had their share of ups and down, and their relationship even witnessed one of them falling out of love- but only to come back together to never separate again. Join us, as we take a look at their lovely journey.

Amruta: "I did not get him. He just walked in". And, that is how this beautiful love story was shaped!

Himmanshoo and Amruta were co-participants on the hit reality show, India's Best Cinestars Ki Khoj, way back in 2004, and that is where it all started. The khoj was for the best actor and actress, but these two ended up finding each other. Their story has just like been the plot of Chetan Bhagat’s hit book (and now movie), 2 States, where two individuals from different cultural backgrounds became friends and then lovers, as Himmanshoo prefers to call it.

Also Read: 14 Things You Worry About While Introducing Your Partner To Your Parents

A famous Marathi actress and dancer, Amruta puts it like this:

In 2004, we’d come from two different cities. We’ve been together till 2015, and we know each other pretty well. We’ve been through a lot of troubles and a lot of good times, but we never left each other come what may. We were friends, then best friends and then got married.

Out of the two, it is Himmanshoo who is the romantic one, as Amruta further shared:

I am very uncomfortable being romantic. I can be funny, I can be all over the place. I can be anything, but romantic. He is completely the opposite.

If you have been together for 10 years, then you are bound to have some fights and a lot of romantic moments. Same goes for this couple too.

Recalling their most romantic memory, both, without a doubt, prefer the one that they had in Europe. Himmanshoo gushes and shares:

It has been an amazing 11-year long journey and we’ve spent so many beautiful moments together. But there was a time when we had gone to Europe for 17 days, that was the first time when we travelled together and we really had a fantastic time. The most special moment was when we were on the top of the Eiffel tower.

Must Read: 8 Easy To Follow Fitness Tips By Milind Soman For Soon-To-Be Grooms

If you ask him about what does he love about Amruta, he blushingly says:

About the fights, they have a rule of apologising to each other at least five times, and then they get back to normal. They do not prefer to stretch a fight for a longer period of time, so they reconcile as early as possible. Although, the fights have reduced, Amruta does not shy away from saying that she wins in every argument. She says:

I win in any argument we have because he just drops the topic. Even when he is extremely angry about something and screaming at me, I still win that argument ‘coz I don’t give it too much importance.

To sum it up, she further explains:

It’s not always sailing smoothly. You have to take all the ups and downs that come your way like a pinch of salt. Just leave everything behind. Forgive and forget. Kahin na kahin woh insaan aapko important lagna chahiye woh choti-choti cheezon ke aage, bas wahi mantra hai.

The couple participated in Nach Baliye Season 7 and won the title without stirring any controversy. Unlike other contenders, they worked only and only on their chemistry and technique, and their hard work and dance did all the talking.

Also Read: 5 Most Adorable Nach Baliye Jodis Who Got Hitched After The Show

They brought entertainment and variety to the show and in barter, the show brought them even closer. They both have been together for a very long time, so there was not a lot to discover, but the lovely lady did discover something.

On a funny note, I discovered that I don’t mind it when he interrupts me or tells me what to do. I realised that he doesn’t mind me dominating him when it comes to dancing.

They both as a couple set the stage on fire, but for Amruta, it was tough because Himmanshoo is a born dancer and would usually end up taking all the credit. She says:

Punjabis ko bahut khushi se naachna pasand hai. My toughest competitor is Himmanshoo. I do the right steps but Nach Baliye judge, Marzi says, ‘Himmanshoo tune itna accha kiya, Amruta what happened to you?’ And I am like, ‘But I did the right stuff.’ But he was enjoying his performance!

Must Read: Top 15 Looks From Amazon India Couture Week 2015 That Brides Can Add To Their Wedding Trousseau

The 'too much' theme of this season on the show gave many couples a run for their money, including Himmanshoo and Amruta. Unlike some other couples who could not take the blow, they had a smooth sailing. During the task of reading the newspaper in the show, the news about Amruta's affair with a music director was released. Everyone was shocked, but what Himmanshoo said won everyone's heart:

Amruta and I were seeing each other for nine years, but in between we had broken off. She got into another relationship then. However, she realised that it was not working out and came back to me. I accept her, whatever she has done.

Himmanshoo let go of what Amruta did, and so did she. He confessed on the sets that he once kissed a girl and apologised to Amruta. At that time, he did not think that it was a big deal, but now he understands how hard it must have been for Amruta.

A source close to the show said about this incident:

During this task (confession round), Amruta brought the topic that although she loves Himmanshoo, she still holds a grudge against him for kissing that girl, and watching as she misbehaved with Amruta. Hearing this, Himmanshoo promptly apologised for that point, he simply made Amruta feel jealous and over-possessive, but now realised his mistake.

Also Read: Indian Couples Refused To Take Gifts At Their Wedding But Instead Asked Their Guests For Their Blood

After ten long years, the couple got hitched on January 24, 2015, but no one popped the ‘question’ to the other as their families decided everything. About the nuptials, Himmanshoo says:

The elders in our families decided the date. It was Vasant Panchami and a very auspicious day to get married. All the grahas are in the perfect position and everything has worked out well.

The couple had three pre-wedding functions including, a mata ki chowki on January 16, followed by cocktail, sangeet and ring ceremony on January 23, 2015.

The sangeet was a star-studded event in which almost all the friends of the couple were present. The event happened in Delhi, and the couple cheered in full force when their friends were performing. Himmanshoo's brother performed on, Main to superman, Salman ka fan, while the groom himself tried to woo his love by dancing on Tera hero idhar hai. The couple swayed on romantic songs like Raabta and Mast Magan.

All their friends including actor, Mohit Malik looked excited about the couple's big step. Actor, Naman Shaw, was too excited for both Amruta and Himmanshoo, he said:

"Amruta is my rakhi sister and Himmanshoo was my roommate in Mumbai. I have seen their love, fights and, the ups and downs. Sometimes, I have also played the peacemaker for them. I represented both the girl's and boy's side during the wedding. Till the joota chupai rasam, I remained on the boy's side, but after his shoes were stolen, I switched sides and demanded money from Himmanshoo."

Must Read: How To Choose A Perfect Saree For Your Body Type

The main event was hosted in Mumbai, and Himmanshoo was pretty happy about it as it was a winter wedding. He said:

"I love winters. It's awesomely cold and the weather is pleasant to wear tuxedo and sherwani, and also to eat gulab jamuns,"

Summing up his feelings about the new beginning of his life with Amruta, Himmanshoo said:

I am excited to start this new journey. It's difficult to express the feelings in words. My life is complete now.

Recommended Read: Top 4 Wedding Disasters and How to Avoid Them

Himmanshoo and Amruta's relationship is the one that has been through all the ups and downs and well-tested by time. Their love never let anything come between them. The love birds who are now tied in the holy matrimony, will soon be taking a break for their honeymoon. We wish this couple the best in all their future endeavours.