Bride of the week, Shiksha Bhatia wanted to keep a chic look for her wedding. She wore an ivory and silver combination lehenga from the shelves of Falguni and Shane Peacock. Let's decode her look!

Ever since the deadly disease, COVID-19 has broken out across the world, the meaning of the big fat wedding has changed to minimal and intimate. However, a wedding is not only a union of two souls, but also it's a unification of two families. Every woman dreams of becoming a perfect bride one day. And when the wedding date gets fixed, the first thought that arrives in a bride's mind is how she will put together her bridal look.

Nowadays, brides swear by one fashion rule, and that is 'less is more'. The brides of the modern age want to keep their look minimal and yet want to make a buzz around their wedding look. Gone are the days when brides would come in a heavy shaadi ka joda with loud makeup. These modern brides love to play with colours and believe in minimalistic chic vibes.

Bride Surprised Her Groom With The 'Lehenga' Of His Choice, Left Him Speechless On The Wedding Day 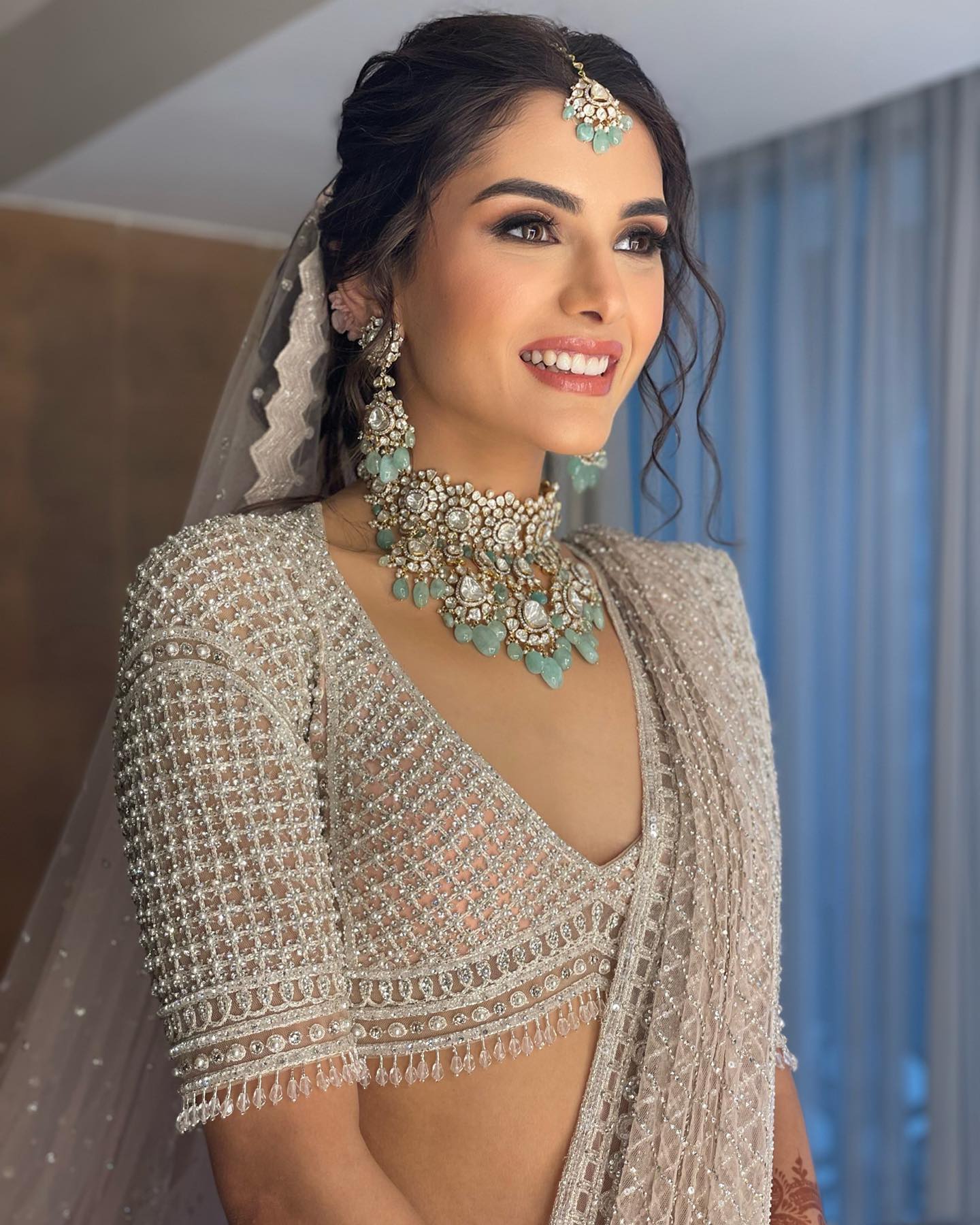 Just like that, we stumbled upon a gorgeous bride who had chosen a pastel-peach and silver-coloured lehenga choli for her wedding ceremony and had put her best fashion foot forward to create a buzz around her look. Her lehenga had featured soft peach-coloured linen along with ivory-coloured threadwork and subtle floral embroidery with silver sequins and white beads. She had worn it with a choli that had a deep plunging neckline and a chic mesh pattern. She had completed it with a dual dupatta style. One with a similar design dupatta was tucked on her shoulder, while another dupatta with a scalloped hemline was pinned on her bun. 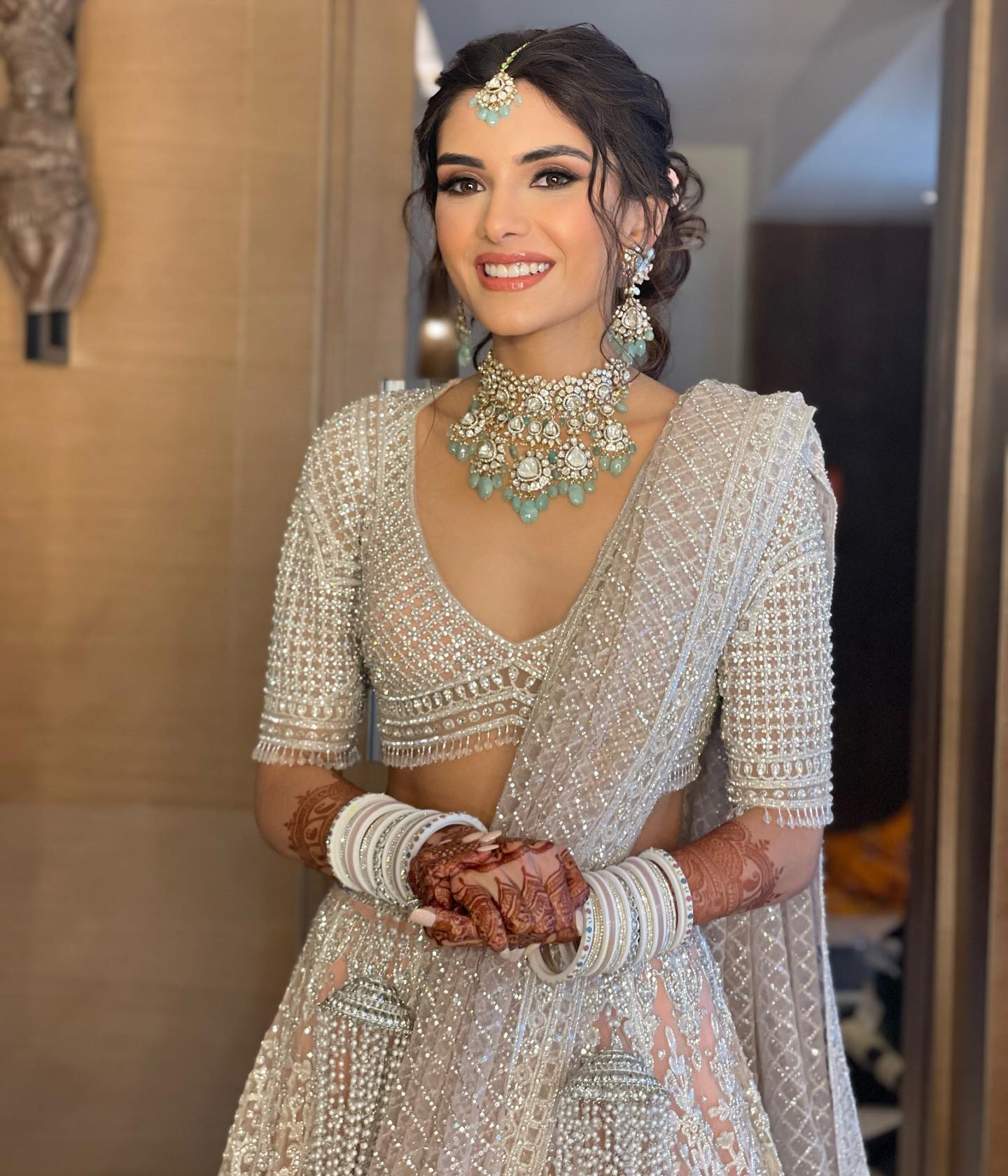 Shiksha had accentuated her look with a dewy look, including light foundation, blushed cheeks, high-defined brows, pink-smokey eyes with thick lashes and a nude brownish glossy lip shade. She had accessorised her whole getup with kundan jewellery that had included a cyan stone and diamond-studded neckpiece, matching earrings, and a maang teeka. 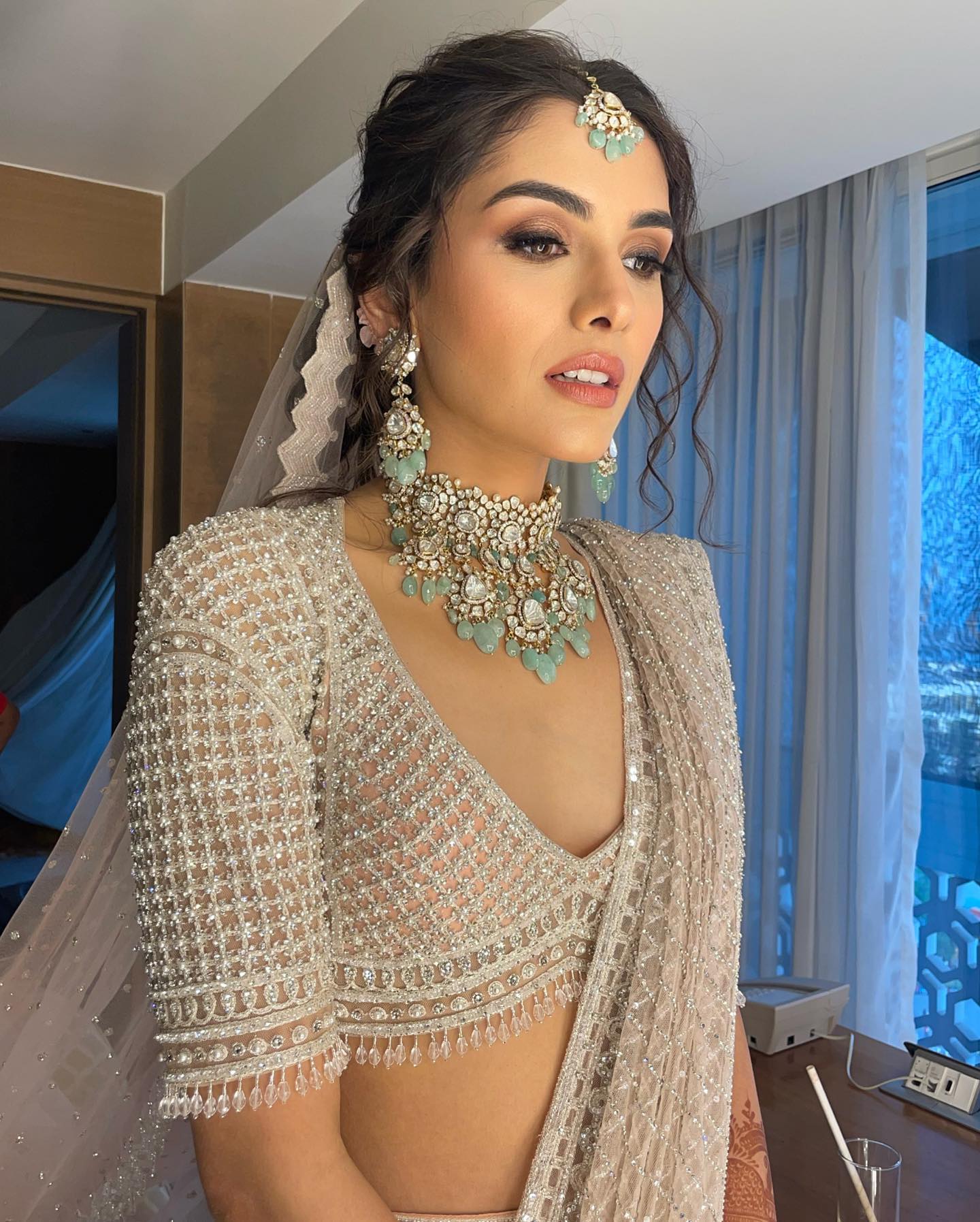 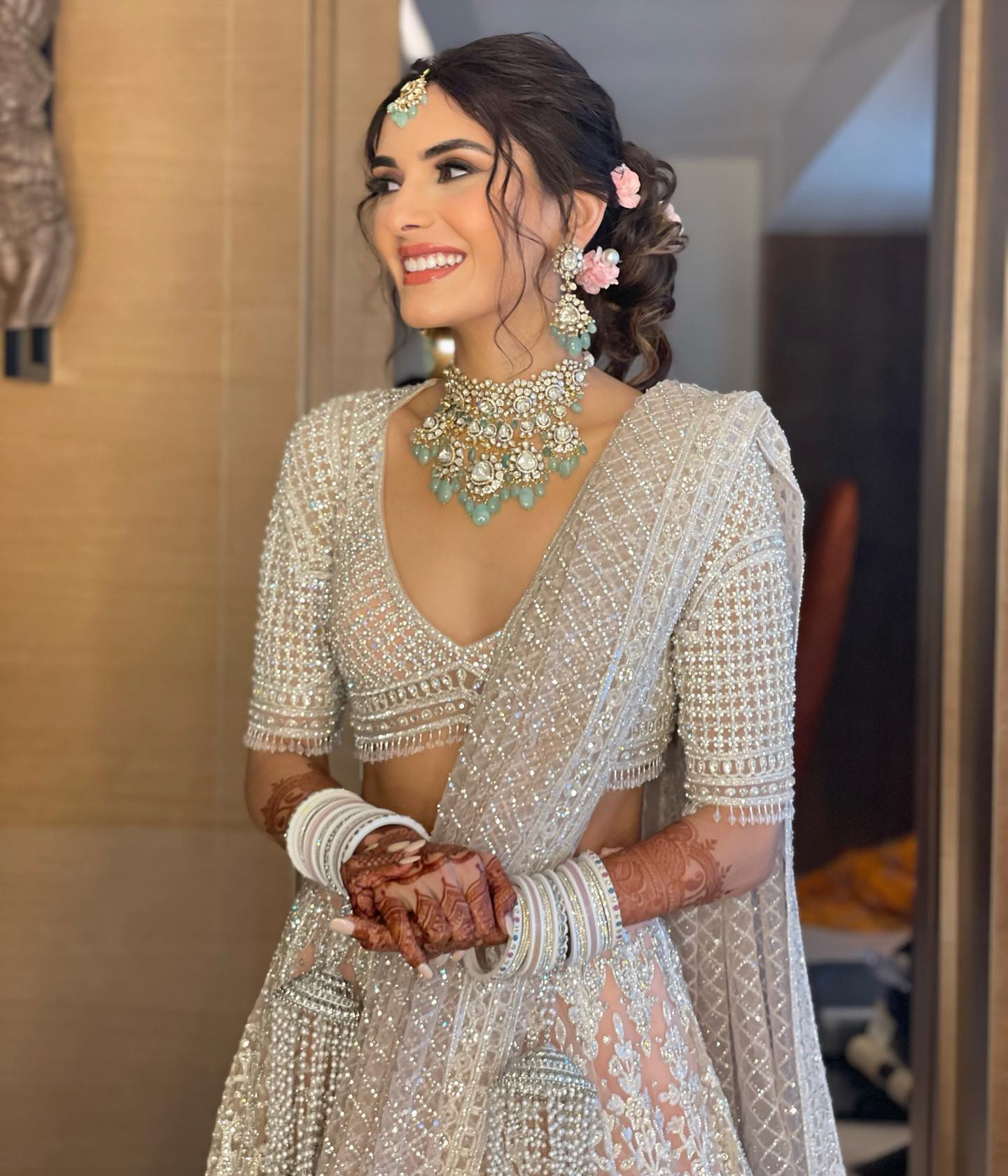 However, what had attracted us to her look was her white chooda and dainty silver kaleera. She had tied her hair in a loosely curled bun and had adorned it with subtle pink flowers. Shiksha's makeup and hair were done by Chaitali Sengupta and Sangeeta Hegde, respectively.

For mehendi, Shiksha had opted for a boho look with a burst of colours from the shelves of one of the famous designer, Anamika Khanna. The then bride-to-be had looked absolutely stunning in an orange-tinted lehenga. It had featured 3-D effect floral embroidered choli and had paired with a dupatta that had a scalloped hemline and a similar pattern print as the lehenga. 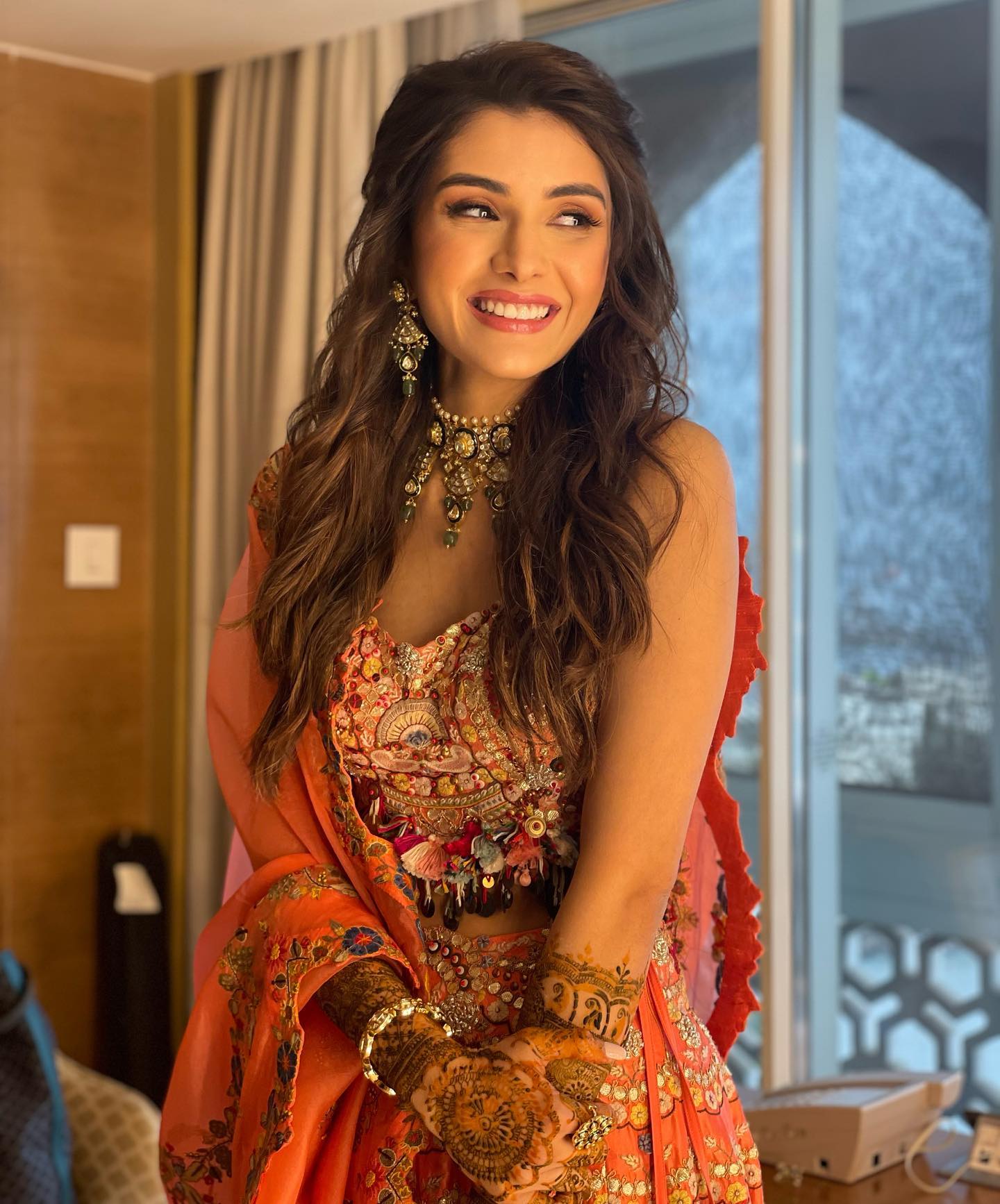 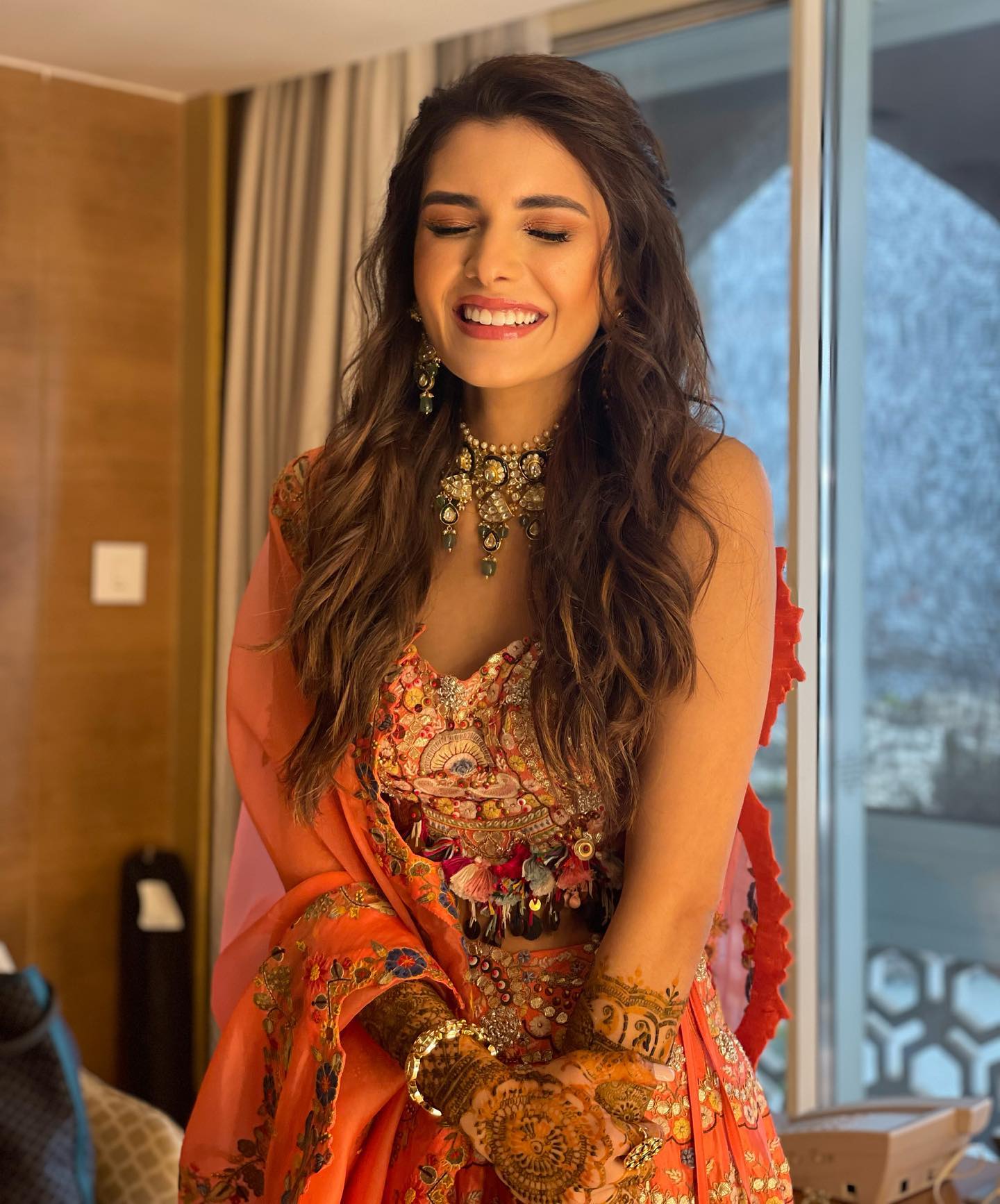 She had kept her beachy curls open and had adorned them with a floral accessory. Shiksha had accentuated her look with soft makeup and orange-hued eyeshadow. She had completed her look with a gorgeous emerald stone and diamond-studded neckpiece and matching earrings.

For Shiksha's sangeet, the gorgeous bride-to-be had looked straight out of a fairy tale as she had worn a beautiful ivory-coloured lehenga with a cape-like dupatta attached with the choli that had given an angel vibe to her look. She had worn the outfit from the shelves of the designer, Manish Malhotra. She had completed her look with an emerald drop neckpiece and a pair of matching danglers. The bride-to-be had accentuated her look with bold smokey eyes and nude glossy lips. 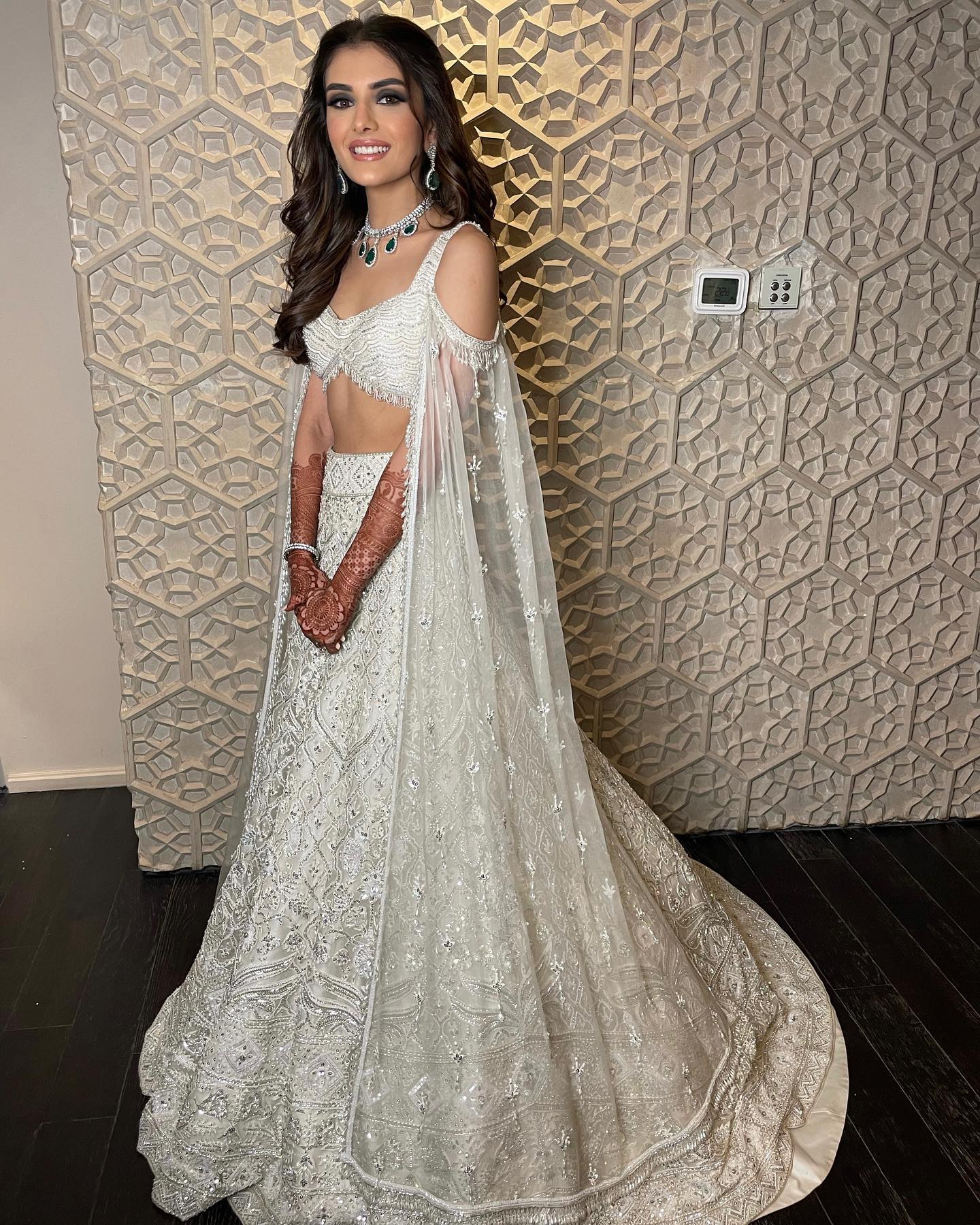 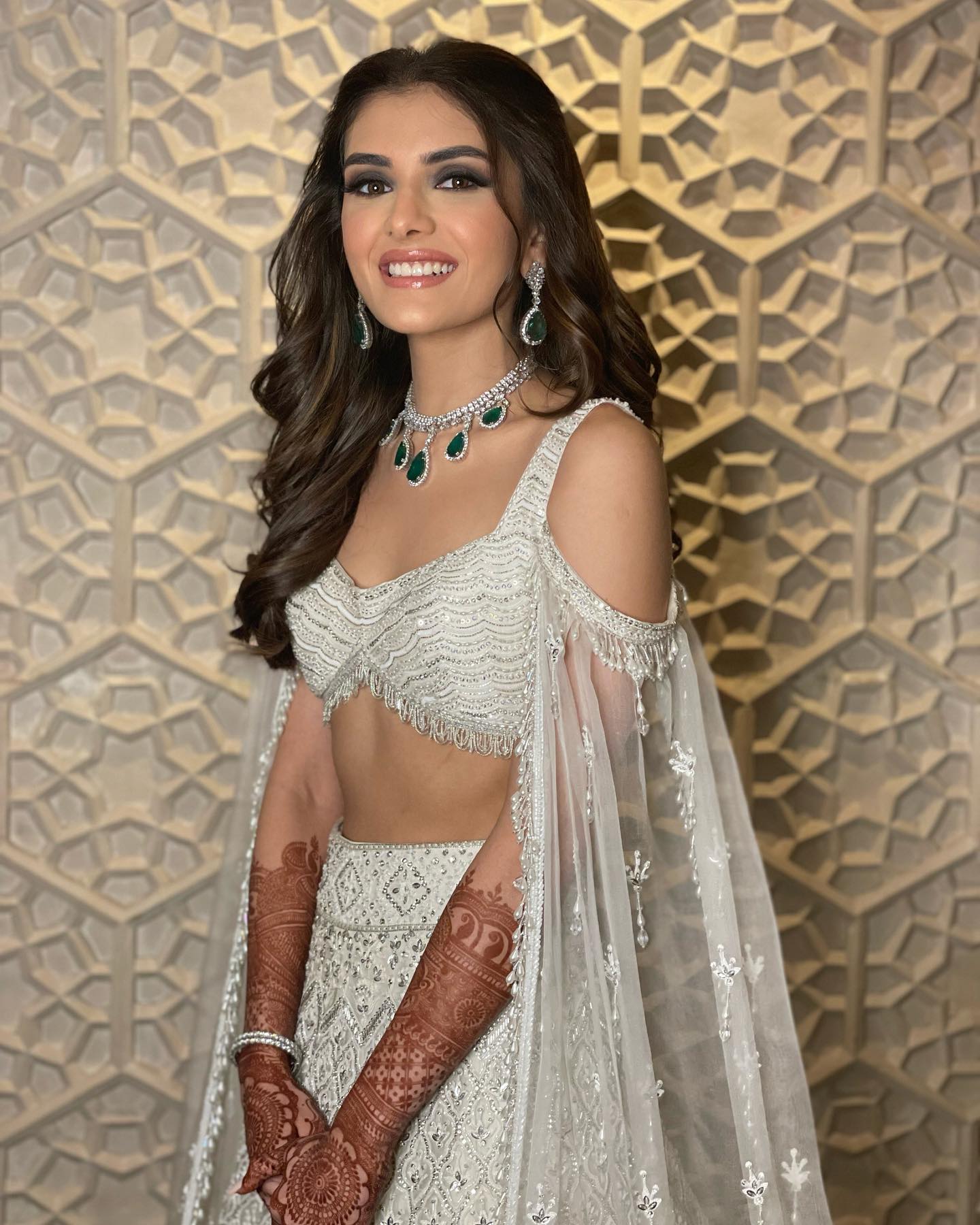 We are in love with Shiksha's every wedding look. Let us know which one was your favourite!