'Zindagi Mere Ghar Aana' fame, Esha Kansara had got engaged to her longtime boyfriend, Siddharth Amit Bhavsar on March 6, 2022. Now, in an interview, the actress shared their love story!

Esha Kansara is one of the renowned actresses in the Gujarati entertainment industry. She has done many television serials, including  Maddam Sir, My Name Ijj Lakhan, Ek Nanad Ki Khushiyon Ki Chaabi… Meri Bhabhi. Now, the actress grabbed the limelight as she got engaged to her longtime boyfriend, Siddharth Amit Bhavsar, who is a musician by profession. Even though they have been dating for quite some time, they had kept it under the wraps. But, now the couple had taken their relationship to the next level on March 6, 2022, after getting engaged to each other.

On March 6, 2022, Esha Kansara had taken to her IG handle and had shared an array of pictures and videos from her engagement ceremony with her boyfriend, Siddharth Amit Bhavsar. In the pictures, the couple had looked gorgeous, and it had looked like they were having quite fun. Sharing the pictures, she had written in the caption:

Rajkummar Rao And Patralekhaa To Tie The Knot In A Destination Wedding, Venue Revealed

"Look what we did! @musicwaala #engaged". "We had to wait a lot for our engagement. On the first date that we decided to get engaged all of us got COVID positive, during the third wave. Then we decided on another date but unfortunately, I had a death in my family then the third time something else happened. So every time we tried to get hitched something kept happening. But finally ab jaa ke ho gaya. We both were overwhelmed as we have been waiting for the past three months to get engaged." 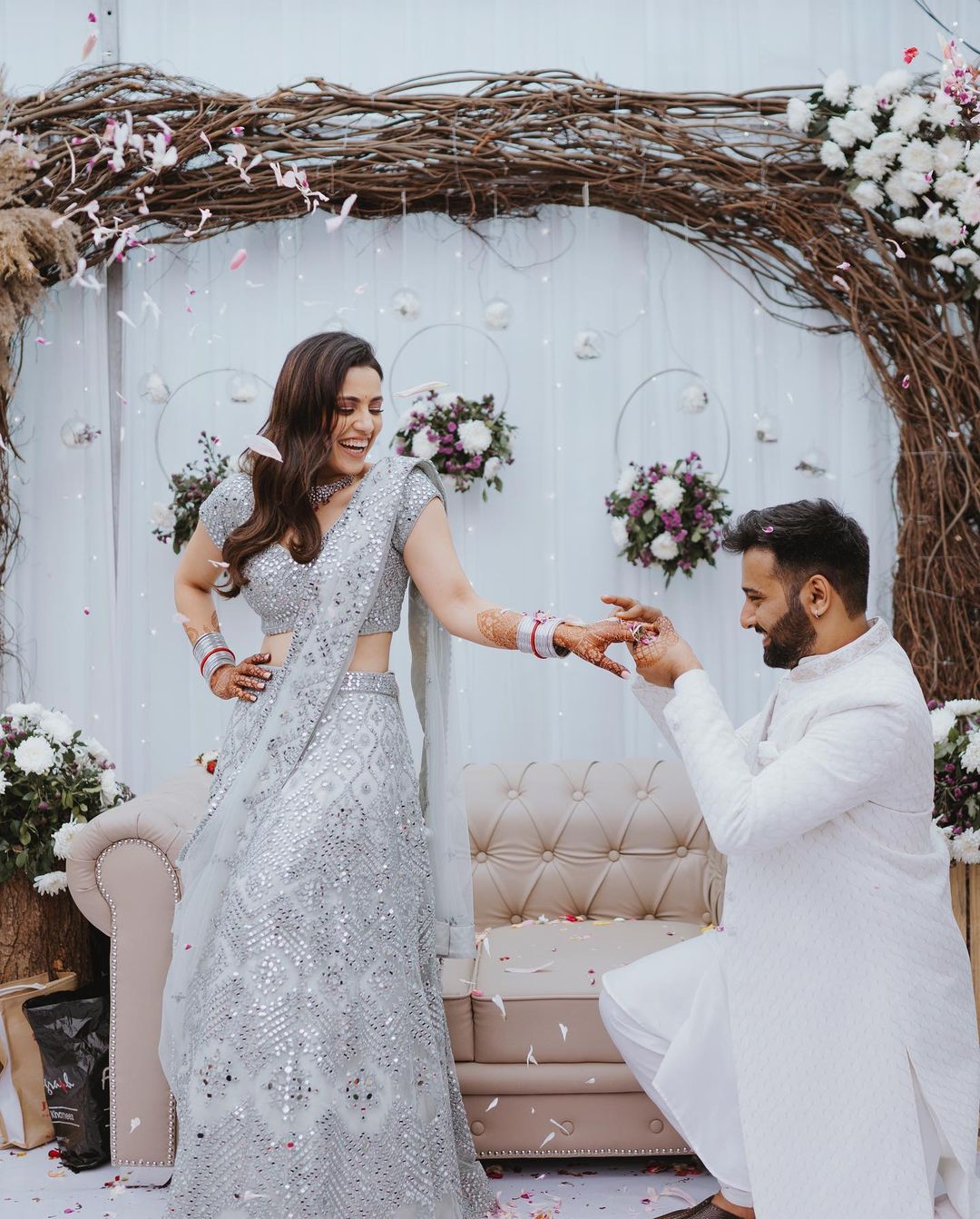 Further in the conversation, Esha talked about her love story and revealed how love had blossomed between them. She shared that she had seen him on Instagram and had instantly developed a crush on him. Esha added that she texted him on his Instagram and thus, they became friends, and later, she got to know that Siddharth also had a crush on her. She shared:

"We have dated for around six to eight months. I had a crush on him ever since I saw him on Instagram and I talked about it to my friends. There was this song from a Gujarati film which was sung by him and I loved it. I only knew him as a singer but later I found out that he is a music composer too. I messaged him on Instagram and through that, we became friends and started talking, and then we met. I told him that I have a crush on him and I like him and I got to know that he too has a crush on me. So it was kind of a mutual crush on each other. But he took his own sweet time and took things very slowly." 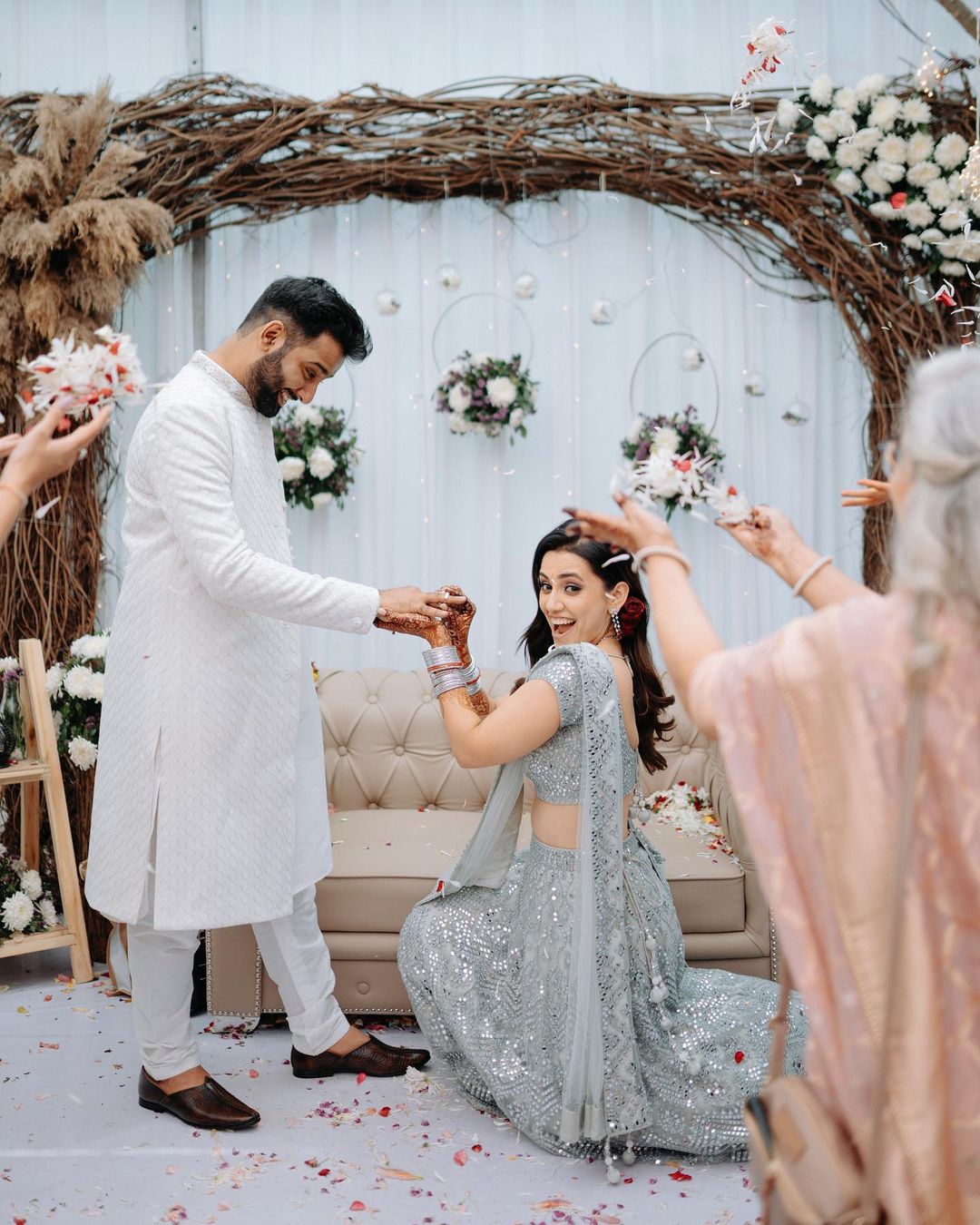 Esha also revealed that it was her who had proposed to Siddharth and had popped that million-dollar question. Talking about the proposal, Esha shared that Siddharth was nervous if Esha's parents would approve of him or not. However, her parents were happy for them, and thus, things went great. She stated:

"So this New Year's eve, I had a party at my place in Mumbai where I had invited my very close friends along with Siddharth. Till that time Siddharth hadn't met my family though I had met his side of the family. My family is very traditional and old school but they were having a tough time looking for a boy for me. Siddharth was really scared that my parents might say no. But before New Year's I told my family and they were really happy about the development. On the eve of New Year's, I went down on my knees and proposed to Siddharth with a ring. Both sides of the family were on a video call, along with our friends. But the funny part was that I forgot my speech and I was so engrossed at the moment that it didn't register to me that he had said yes. Later I had to ask him if he had said yes." 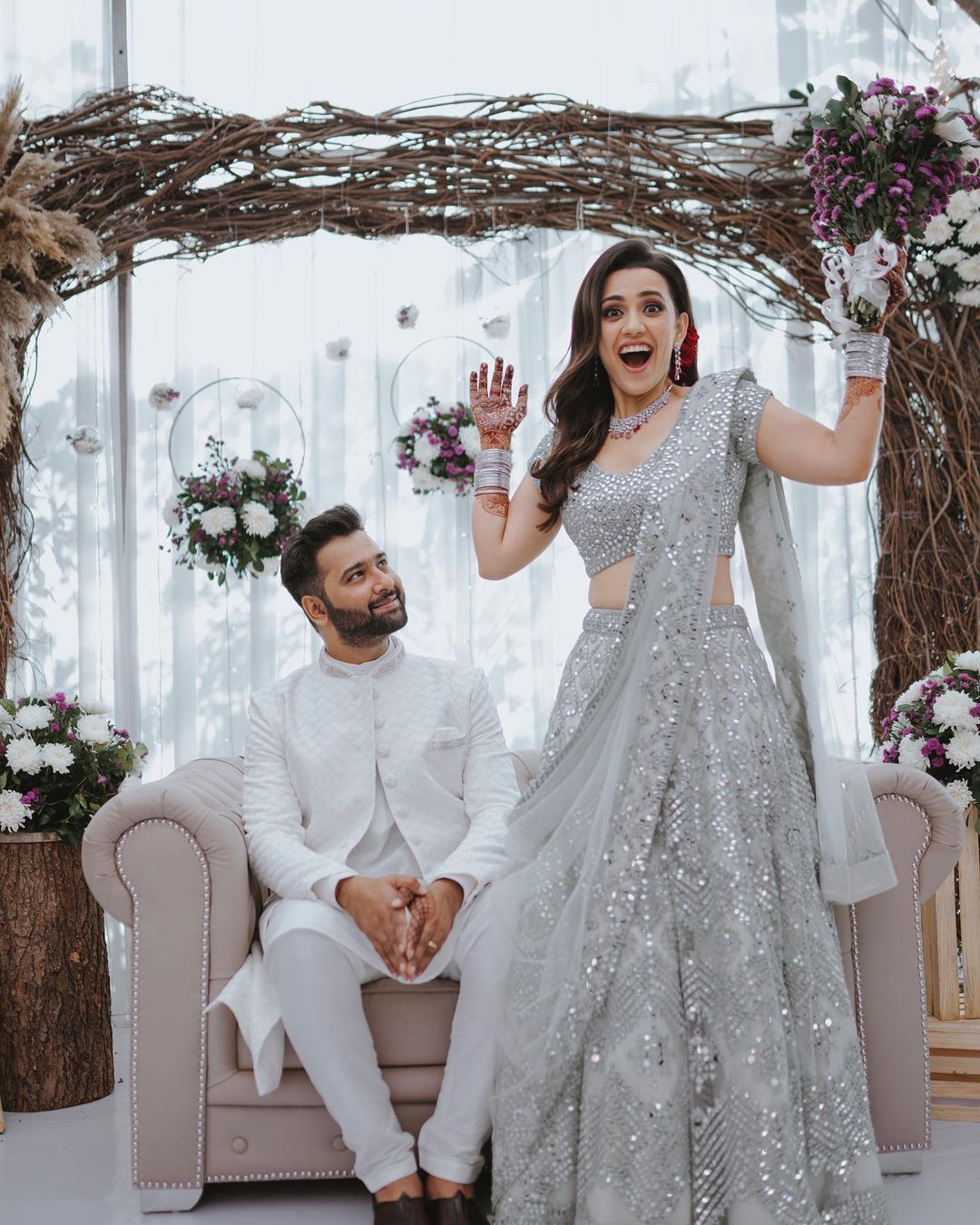 Further in the interview, Esha spilled some beans on whether she and Siddharth have been living together in Mumbai. Talking about the same, she shared that Siddharth lives with his family and she stays alone. Sharing that she would never be in a live-in relationship, Esha said:

"For my family, the term boyfriend doesn't exist and unke liye seedha shaadi hoti hai. So we both are not staying together. Siddharth stays with his family in Mumbai and I stay by myself while my family is in Ahmedabad. Abhi Siddharth ke ghar pe jaane ke liye time hai. I would never get into a live-in relationship. Marriage is something that is very pure for me. This thing has been instilled in me by my parents. Either I would have stayed single or I would have been a married woman. There is no middle path for me that way." 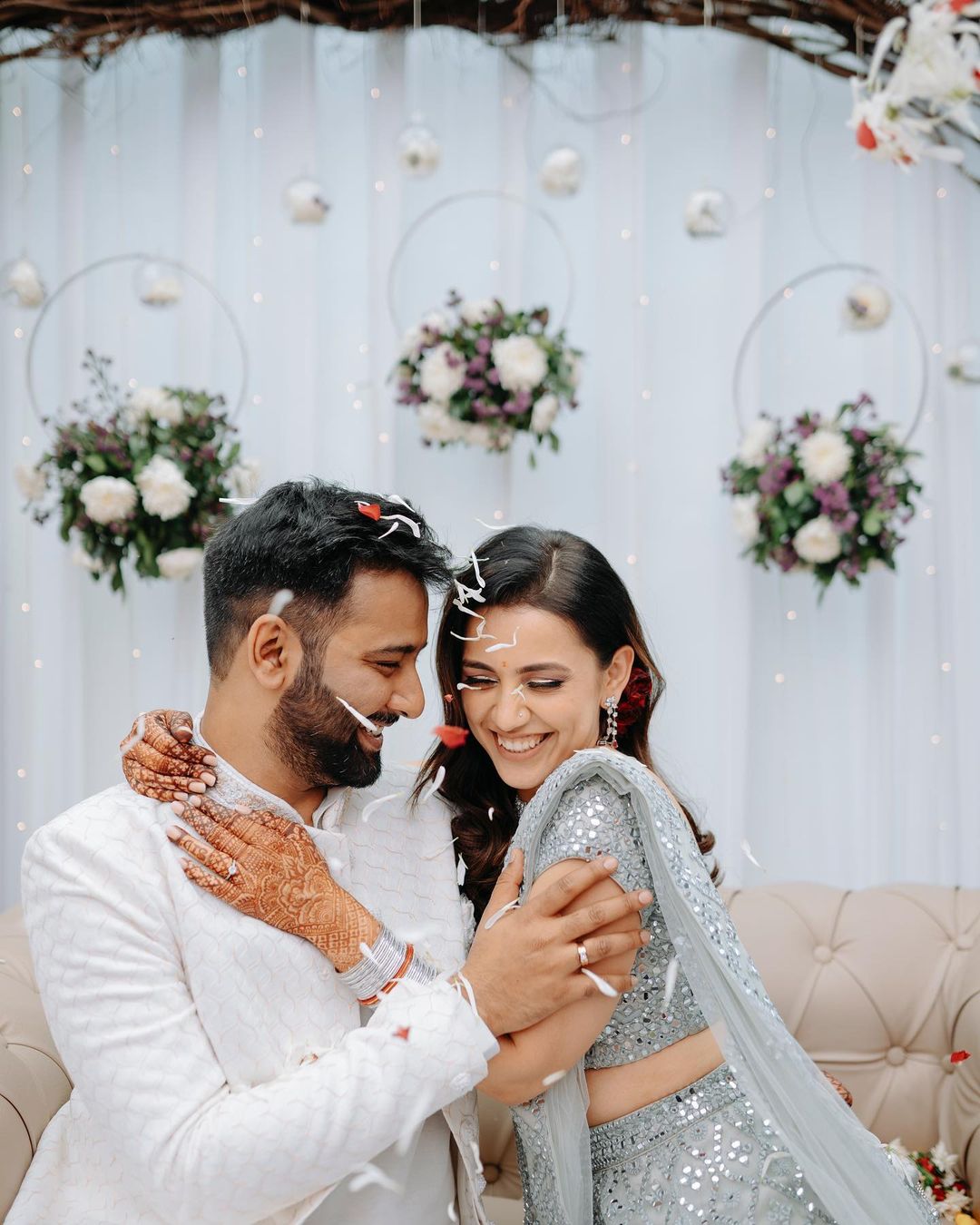 Esha and Siddharth have been dating each other for a long time, and the two are madly in love. However, when she was asked about her wedding plans, Esha revealed that they are going to take their own sweet time before taking the plunge. She concluded:

"Main toh kal hi shaadi kar sakti hoon. But now we both want to focus on our work. Mentally we both are married to each other but we will take our own sweet time. As of now June se pehle toh shaadi ki date nahi nikal paa rahi hai." 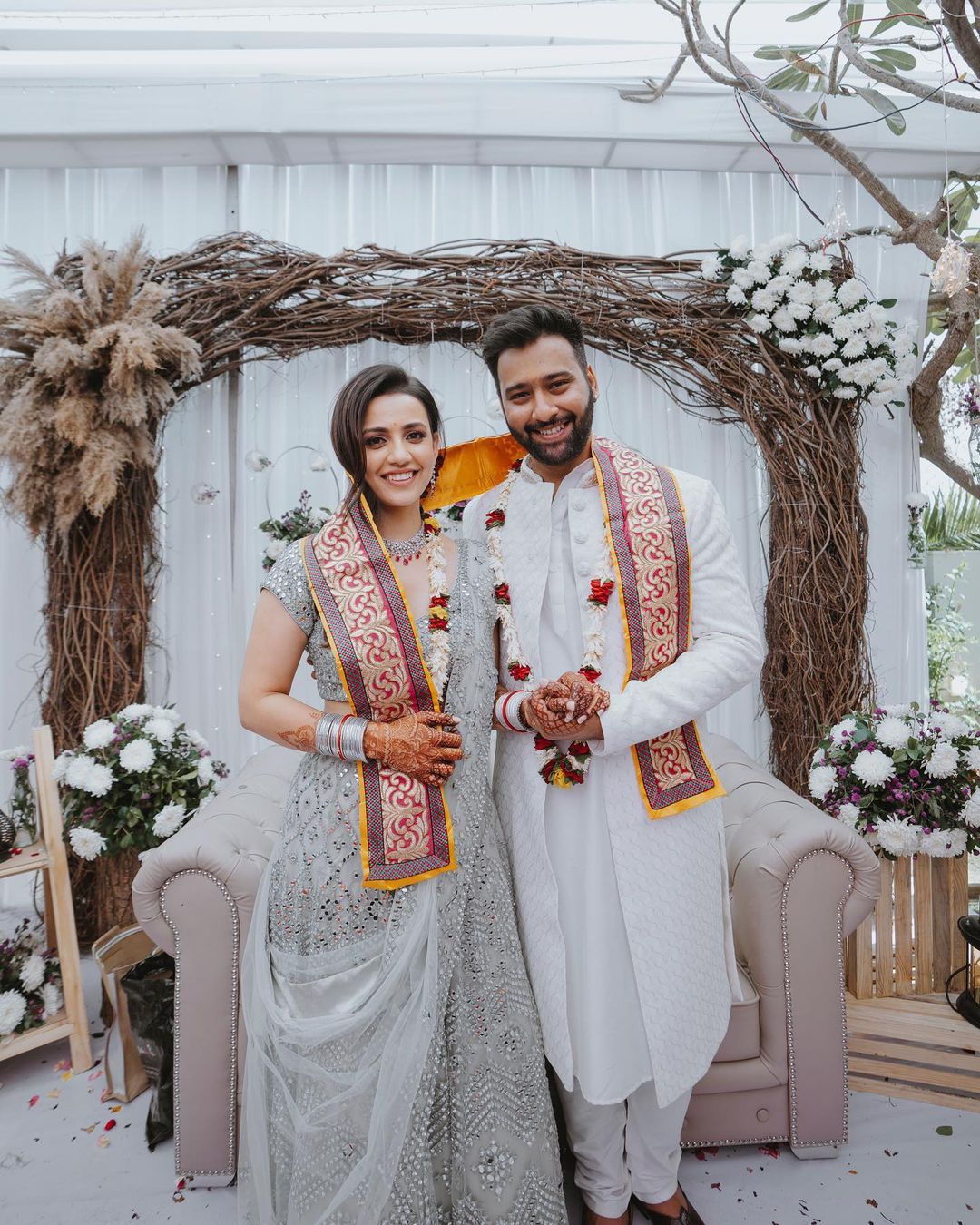 On the work front, Esha was last seen in Zindagi Mere Ghar Aana as 'Amrita Sakhuja'.