Here is the huge list of ensembles worn by the Ambani family and a few of their close ones on the youngest Ambani prince, Prithvi Akash's one-year birthday bash. Read on to know more!

The Ambanis are definitely one such family in the country, who are known for their remarkable works in the business industry and larger-than-life lifestyle. Coming to the youngest prince of the Ambani clan, Mukesh Ambani and Nita Ambani's son, Akash Ambani, had tied the knot with his ladylove, Shloka Mehta, on March 9, 2019, and were blessed with a son, Prithvi Akash Ambani, on December 10, 2020.

Prithvi Akash Ambani had completed one year, and needless to say, the Ambanis had left no stone unturned to celebrate the day. Starting with a silver coin attached to cards, a great size cake, and an aqua-themed party, it was indeed a grand celebration. Though the Ambanis kept the affair away from the media glare, we had stumbled upon a few glimpses from the lavish party, thanks to the various fan pages. In one of the videos, we could see the city of Jamnagar all decked up in colourful lights, unique fountains and other waterworks. However, the curated list of ensembles worn by Ambani and Mehta family members on Prithvi's birthday is also here.

Suggested Read: Janhvi Kapoor Donned An Affordable Blue-Coloured Jumpsuit, Worth Rs. 10K And Its Too Cool To Miss 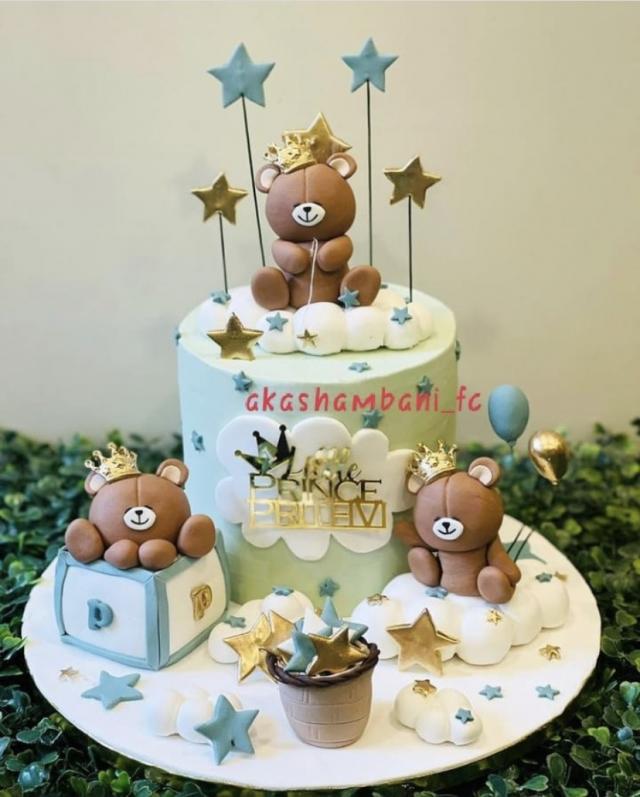 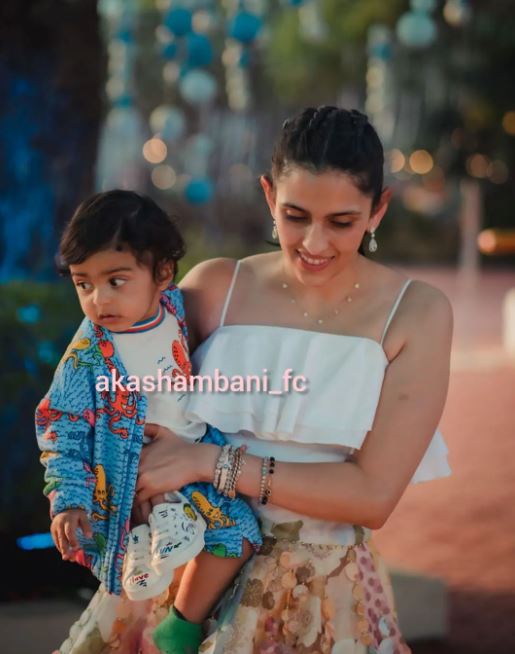 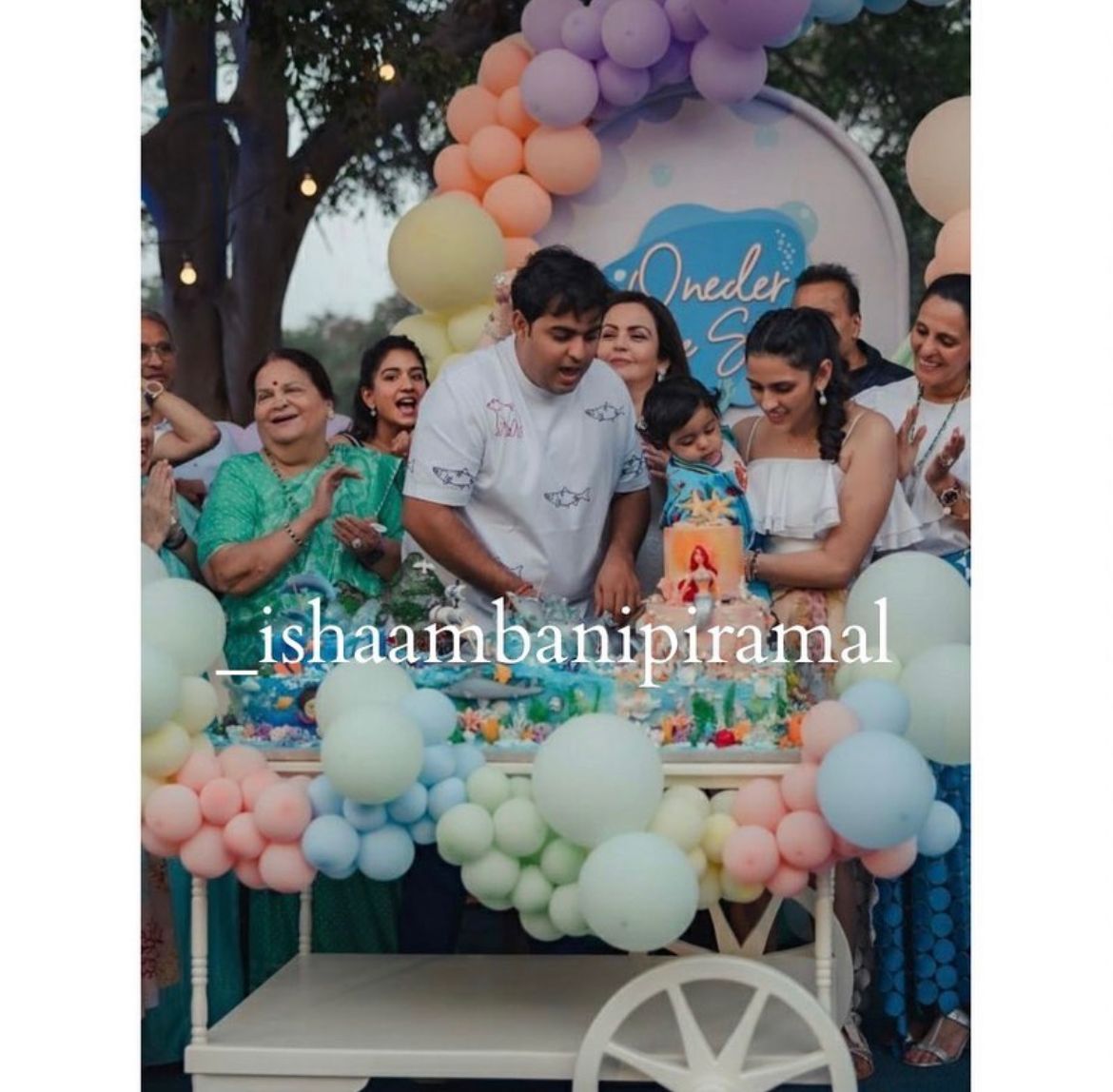 Even after being far away from the entertainment industry, Shloka Mehta can easily give a tough competition to the Bollywood actresses with her stunning fashion choices. In a few pictures from the event, the birthday boy's mother, Shloka, was seen wearing a mini skirt made up of multi-coloured patchworks in a floral pattern. Upon doing some research, we found the Tempo Patch Mini Skirt was from the brand Zimmermann and is priced at a whopping amount of Rs. 94,195. She had teamed her look with a pair of diamond earrings, butterfly heels, a braids-pony tailed hairdo and had won our hearts. 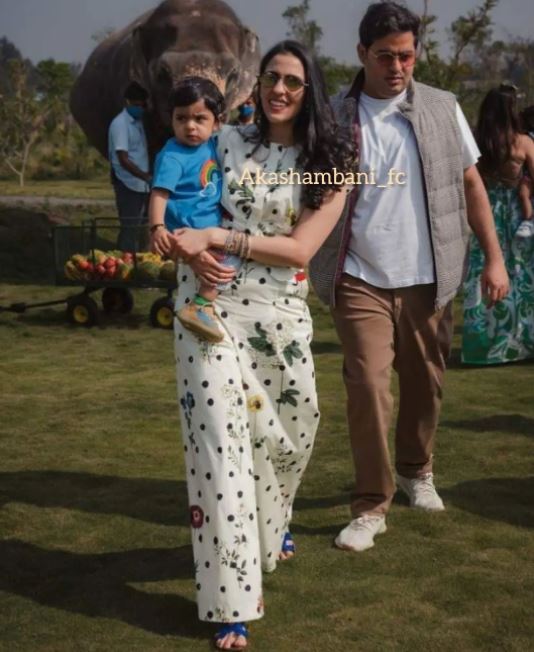 Shloka Mehta had also worn a Botanical Cut-Out Jumpsuit for another look at her son, Prithvi Akash Ambani's first-year birthday bash. The Ambani daughter-in-law's jumpsuit had featured bobby prints all over it along with floral embroideries. The jumpsuit was from the brand, Oscar de la Renta and was priced at Rs. 94,619. Shloka had completed her look with open tresses, stud earrings, and minimal makeup. 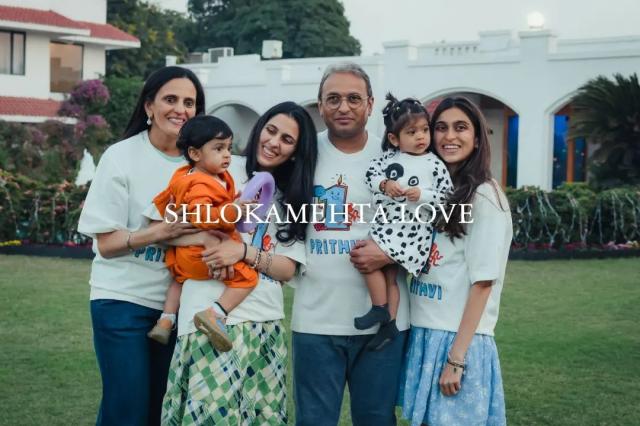 Shloka Mehta was seen wearing another ensemble at her son, Prithvi Akash Ambani's birthday party. She had worn a Falabell Muti Check Tiered Midi Dress, which had a square neckline and bulgy sleeves. The beautiful checkered dress was from the brand, Faithfull The Brand and had come with a cost-effective price of Rs. 23,935. 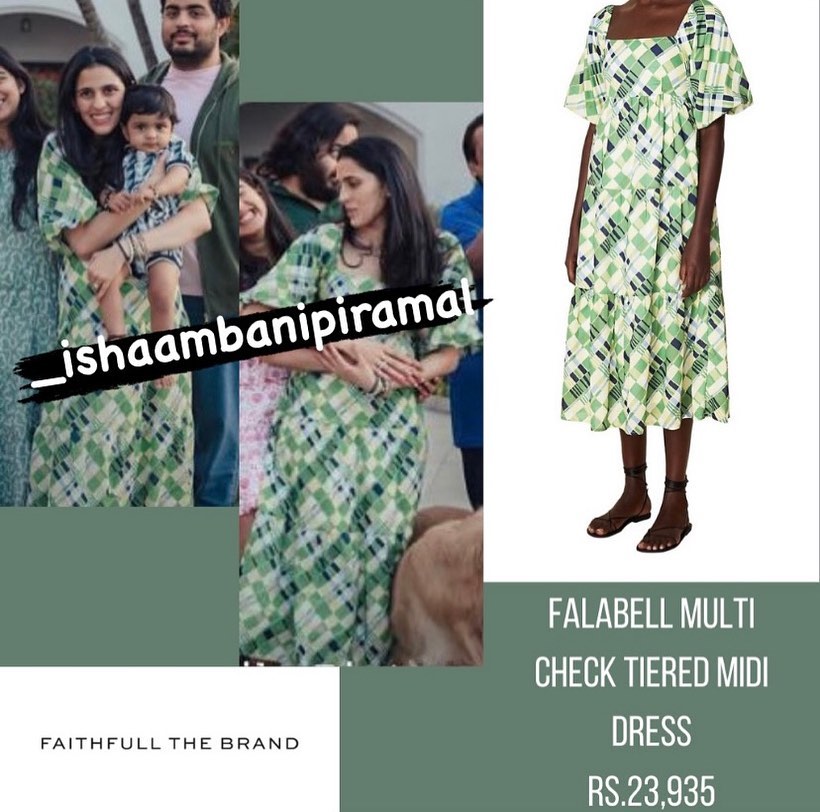 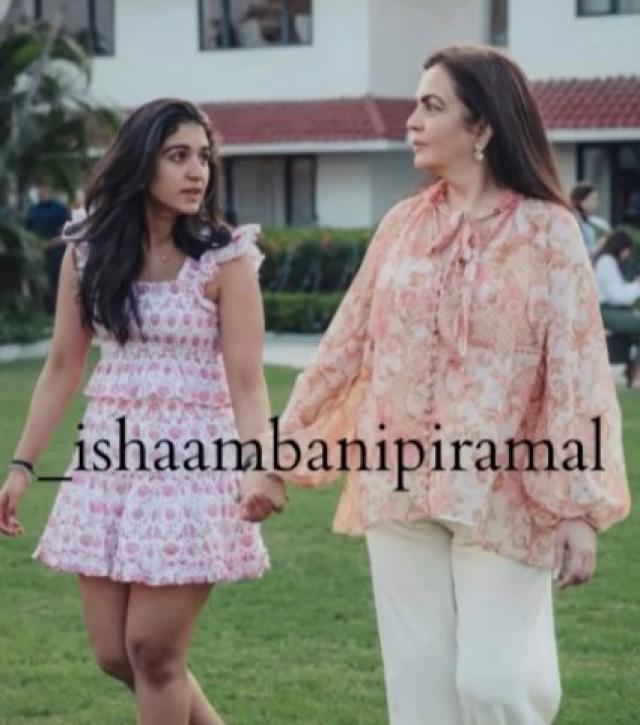 Nita Ambani needs no introduction. The charming grandmother of Prithvi Akash Ambani is known for her grace and poise. For one of her looks at Prithvi's birthday, Nita had worn a Postcard Lantern Blouse paired with a white palazzo and lose tresses. The orange-coloured top had featured a bow in the frontal part and was made of chiffon fabric. Nita's blouse was from the brand, Zimmermann and had come with a price tag of Rs. 51,558. 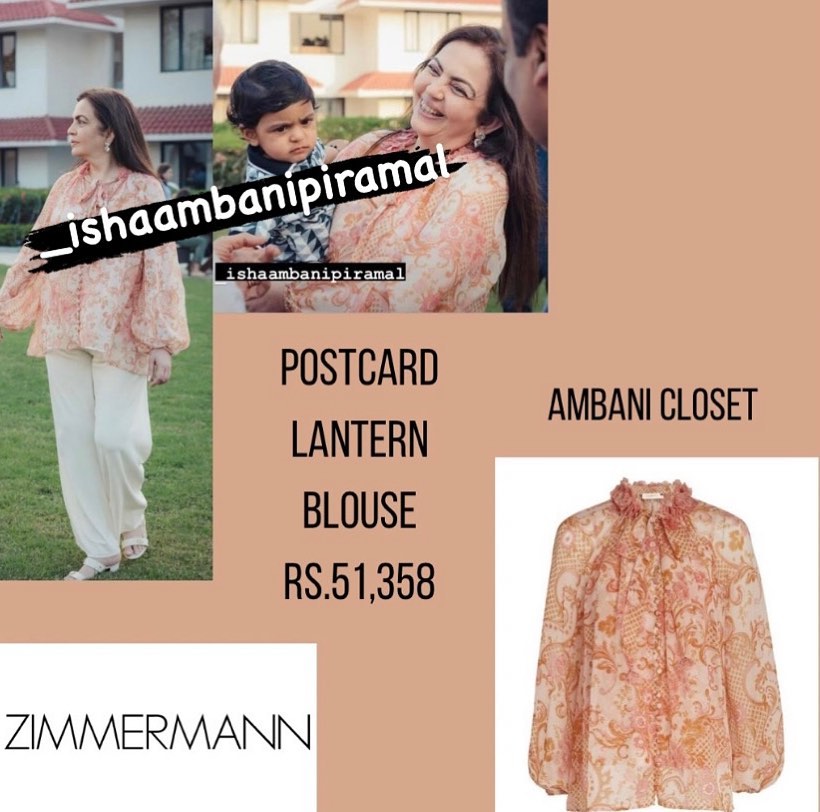 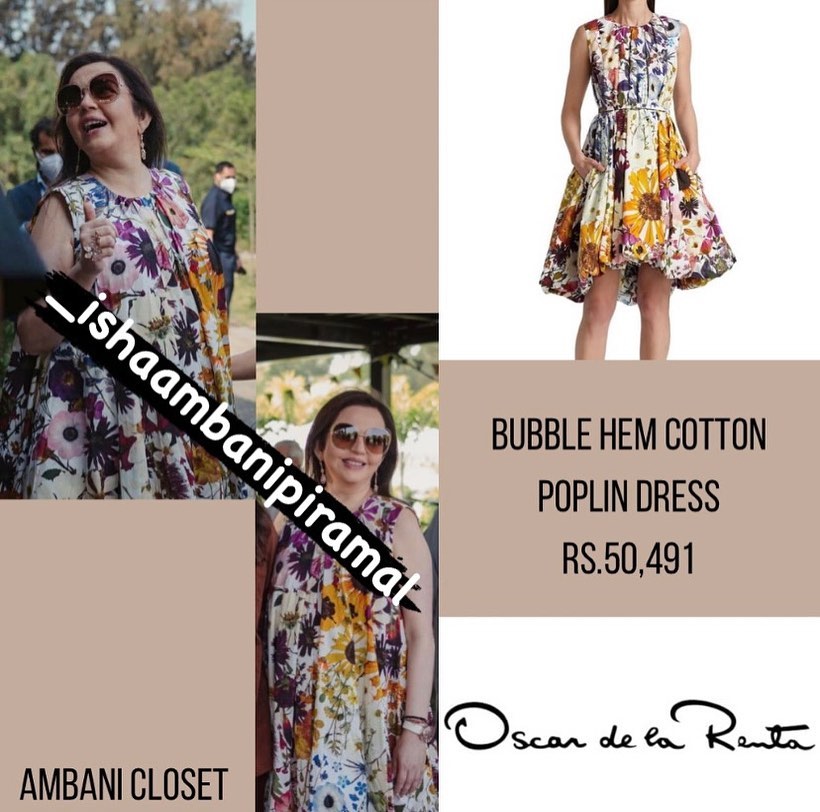 Nita Ambani was seen donning another outfit on her grandson's birthday. She was seen wearing a Bubble Hem Cotton Poplin Dress, which had featured lots of flowers popping up in vibrant colours. The sleeveless dress was from the brand, Oscar de la Renta and was priced at Rs. 50,491. She had completed her look with open tresses and accessories like a pair of diamond earrings, rings, and sunglasses, and had looked fabulous. Prithvi Akash Ambani's dearest father, Akash Ambani, had worn a striped cotton T-shirt from the brand, Missoni. He had looked super comfortable donning it while doing his daddy chores. The multi-coloured striped T-shirt featured the brand's logo embroidered on it. And the T-shirt had come with a price of Rs. 17,559. Daughter of one of the richest families in India, Isha Ambani had tied the knot with the love of her life, Anand Piramal, on December 12, 2018, at their residence, Antilia in Mumbai. Apart from her family background, she is also known for her extraordinary fashion choices. At her nephew, Prithvi Akash Ambani's first-year birthday party, she had also worn multiple ensembles. However, Isha's one comfy blue-coloured dress had grabbed our eyeballs. The outfit had featured white jungle print all over it along with puff sleeves and layered bottom. Donning the beautiful ensemble, Isha had looked gorgeous. 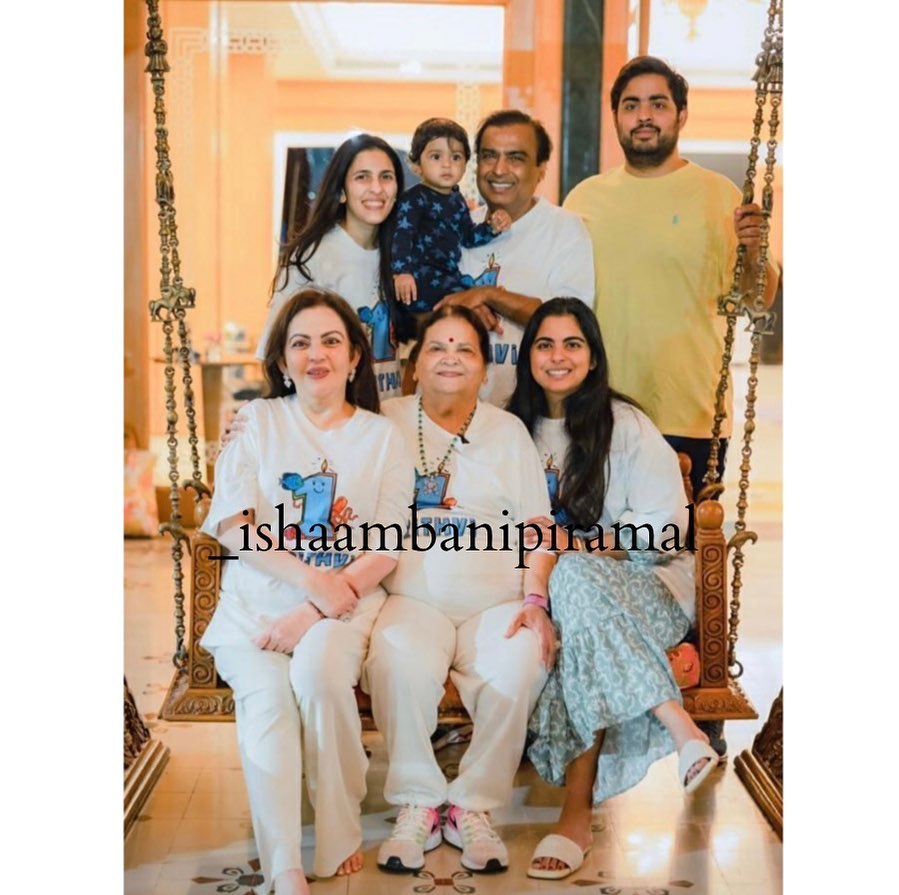 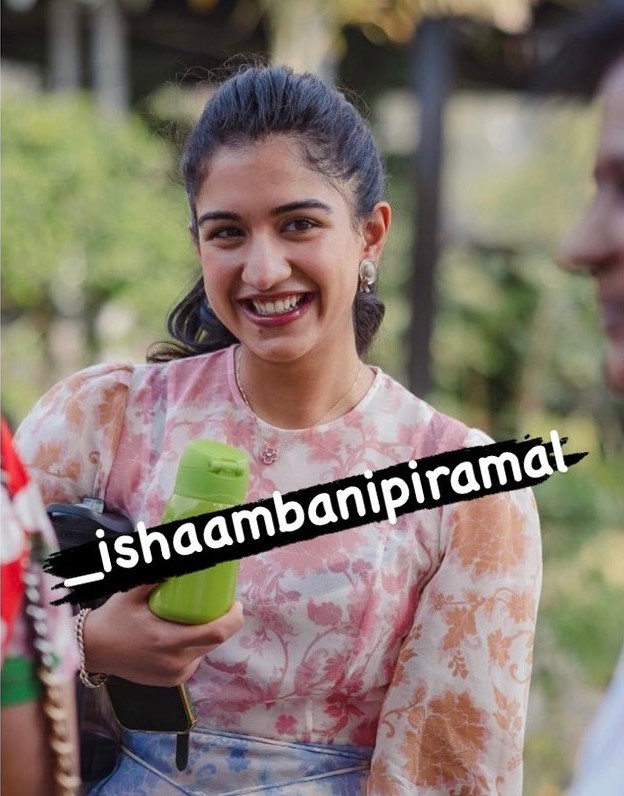 Every now and then, Radhika Merchant hits the headline with her relationship with Nita Ambani and Mukesh Ambani's younger son, Anant Ambani. Radhika is rumoured to be the Ambani clan's to-be-daughter-in-law and is often spotted with the Ambanis. She was also present at Prithvi's birthday bash. She had donned a Postcard Flounce Midi Dress for the party from the brand, Zimmermann. The dress featured multi-coloured flares, and Radhika had looked pretty while donning it. The dress was priced at Rs. 85,416 at the brand's website. 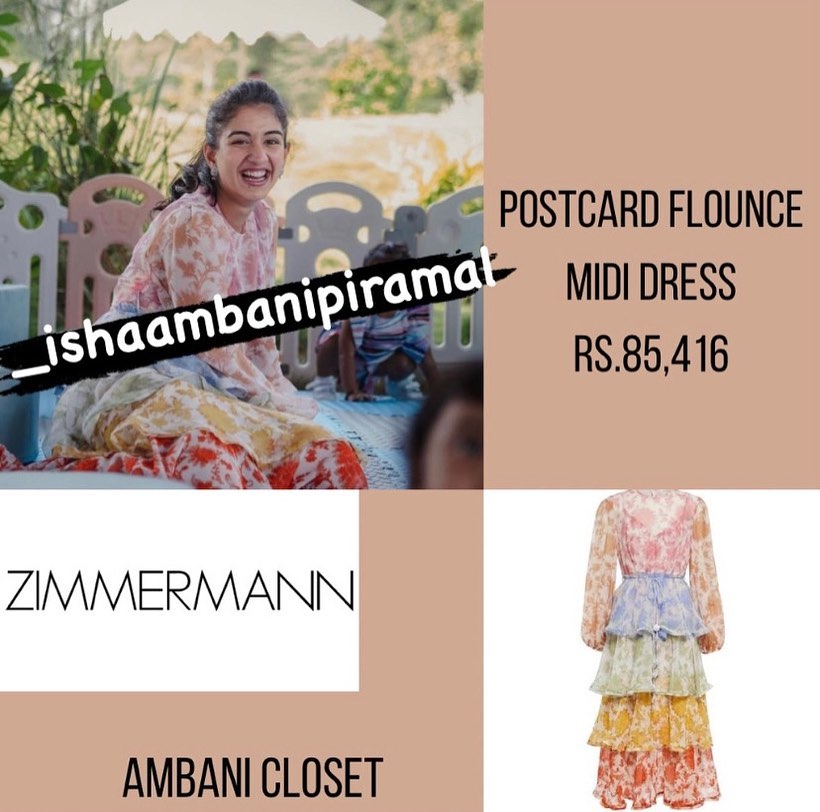 Shloka Mehta's loving mother, Mona Mehta, is also a fashion enthusiast. For her grandson Prithvi Akash's birthday party, she was seen wearing a dual-coloured Geometric Patterned Layered Skirt and had looked gorgeous. Mona had paired her skirt with a white ruffled top, a pretty neckpiece, and backcombed ponytail. Mona's skirt was from the brand, Marni and was priced at Rs. 9,774. 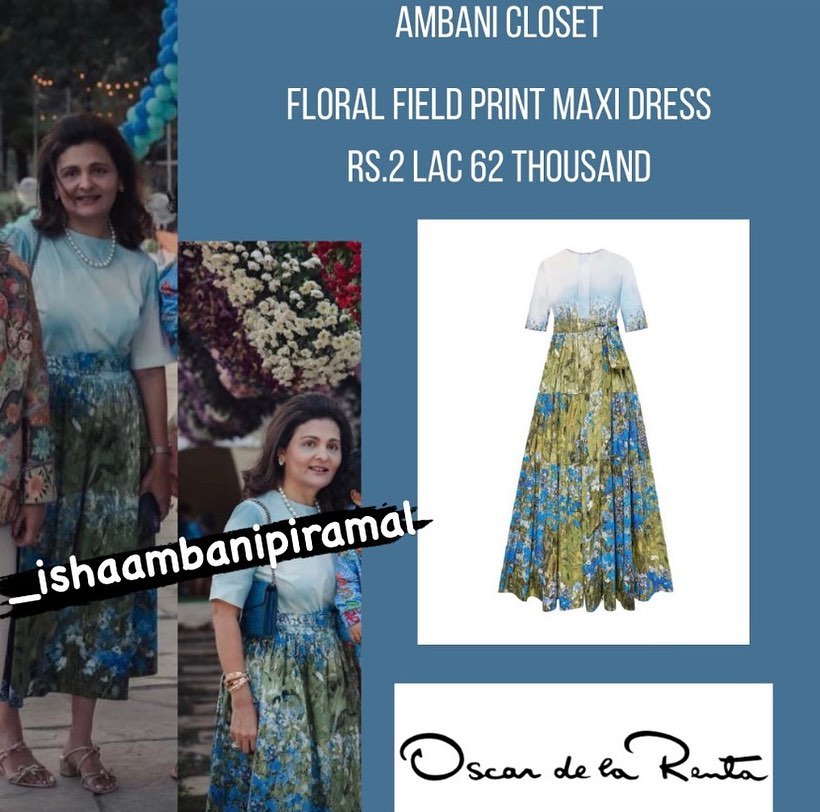 Mukesh Ambani's sibling, Nina Kothari, is one of the key members of the Kothari Sugars & Chemicals Ltd, which was formerly led by her husband, Bhadrashyam Kothari. She was seen wearing a Floral Field Print Maxi Dress, which had featured a dyed tone to the entire ensemble and was suitable for Prithvi's aqua-themed birthday party. Her floral printed dress was from the brand, Oscar de la Renta and had come with a whopping sum of Rs. 2,62,000. Nina Kothari and Bhadrashyam Kothari's daughter, Nayantara Kothari, is also a lady with a charming smile. She had worn a chic silk ensemble which consisted of a shirt and a pair of shorts, both from the brand, Gucci. Her silk ensemble had featured broad sky blue borders and multi-coloured floral print, giving Nayantara a serene look. However, her silk shirt came with a whopping amount of Rs. 1,63,000, and her silk shorts were priced at Rs. 61,352. Last but not least, we had also stumbled upon one of the super adorable looks of the birthday boy, Prithvi Akash Ambani. He had worn a navy-blue coloured onesie and had looked no less than a ball of cuteness. His Onesie was from the brand, Dolce and Gabbana and had featured majolica prints along with nautical designs and white ribbed trims. It came with a price tag of Rs. 22,312 and is available on the brand's website at a discounted price of Rs. 13,387. 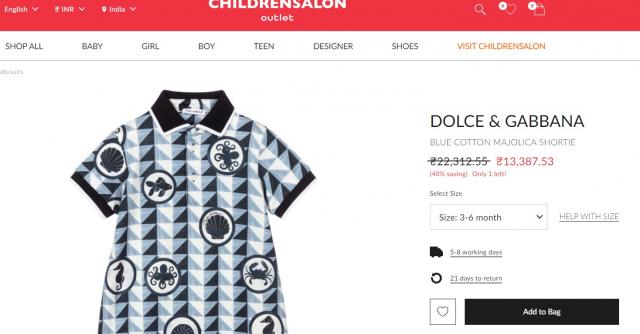 Well, this proves the attendees at Prithvi's first-year birthday bash, including him, definitely had a collection of stunning ensembles worth drooling. What do you think?