Being a mommy is one of the most beautiful phases of a woman’s life, but what if you don’t want to get married or haven’t found the perfect partner in your life until now? Does that deter a 21st-century woman from embracing motherhood? Not anymore! Thanks to the advent of technology, gone are the days when motherhood was a long-lost dream if you weren’t married. Strong independent women like Ekta Kapoor are proving to the world that one can achieve anything, provided they have the yearning to do so. And the outcome? World-class satisfaction! (Do Read: Chhavi Mittal Pens A Thank You Note For Husband, Mohit Hussein For Being With Her In Chaotic Times)

It was on January 27, 2019, when Ekta Kapoor welcomed her first child, a baby boy into her life via surrogacy. After multiple unsuccessful attempts but not deterred from achieving her goal, Ravie Kapoor was born to her via surrogacy. A Mid-Day report had then confirmed the same which could be read as, “The 43-year-old has had a son via a surrogate; the child was born on January 27. The baby is healthy and will be home soon”. And ever since, how impatiently have we been waiting to see a close-up of baby Ravie Kapoor. And now, after 3 months of embracing motherhood, Ekta Kapoor posted the first-ever glimpse of her ‘whole world in one frame’, brother, Tusshar Kapoor’s son, Lakshya Kapoor and baby Ravie Kapoor cuddled in his mommy's arms! In the picture, Lakshya can be seen seated in the corner of the sofa, while newbie mommy, Ekta clicked a selfie, with her little baby in her arms! Sharing the pictures of her ‘sun and moon’, the Baarish producer wrote, “My boys! Two sons !!! #mysunandmoon.”

Take a look at the picture here: 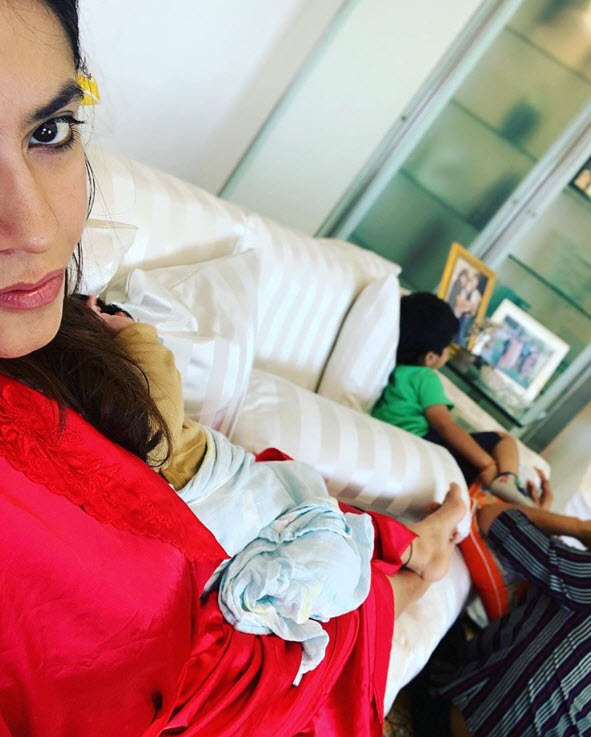 On February 2019, Ekta Kapoor had posted a picture that had a gleeful Lakshya Kapoor, keeping a watch on how his baby brother, Ravie Kapoor is doing, who was sleeping peacefully in his white cot. One glimpse at Lakshya and you will see the look on his face which said, “When is he going to get up and play with me?” Bua-cum-mommy Ekta Kapoor had captioned the picture as, “Big brother is watching!!!” (Must Read: Shah Rukh Khan Shares A Picture With His 'Mini Me' AbRam, We Are Amazed To See Their Resemblance) Ekta Kapoor had taken to Instagram on January 31, 2019, and announcing the good news to all her fans wrote, “By God’s grace, I have seen many successes in my life, but nothing beats the feeling of this beautiful soul being added in my world. I cannot even begin to express how happy my baby’s birth has made me. Everything in life doesn’t go the way you want it to but there are always solutions to those hiccups. I found mine and today I feel immensely blessed to become a parent. It is an emotional moment for me and my family and I can’t wait to begin this new journey of being a mother to my little bundle of joy, Ravie Kapoor." 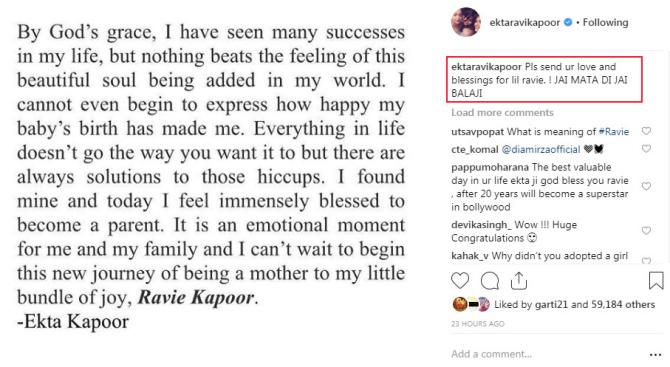 Ekta Kapoor had also shared how her doctor, Dr Nandita  Palshetkar guided her during the entire process and had even posted a quote of hers which could be read as, “Ekta came to me some years back to become a mother. We tried to help her get pregnant with multiple cycles of IUI and also multiple cycles of IVF. But we were unsuccessful. Hence, we had to take help of the technique of surrogacy which we performed nine months back at our Bloom IVF center. Nine months later, she had achieved success with the birth of a child on Sunday.” Ekta Kapoor’s parents, Shobha Kapoor and Jeetendra (also known as Ravi Kapoor) were on cloud nine after the baby was born as their family is now complete! Sharing about the same with Mid-Day, the legendary actor and first time daadu/naanu had stated, “Shobha and I were over the moon when we heard it first. We are looking forward to him coming home. Our family makes daily rounds of the suburban hospital where the baby is currently under supervision. My family says he (Ravie) looks just like me, but then, a child's looks keep changing every day. It's tough to say who he will resemble in the future. Now, I have Laksshya and Ravie — they are the apple of my eye. I can die peacefully now as both my babies have their own babies." (Also Checkout: Kajol Once Had A Huge Crush On 'The Khiladi Of B-Town' Akshay Kumar, Karan Johar Spills The Beans)

In a recent interview with Anupama Chopra, Ekta Kapoor had opened up about being a single mother to her Ravieoli (as she lovingly calls her son) and opting for surrogacy. She had shared, “When I knew that the surrogate had conceived, and it was on June 7. On my birthday I got to know. I was a bit overwhelmed. I was like 'Okay this is happening. This is going to be a huge responsibility. I just wrote a show out which is going to be with an A-list Bollywood actress. It's called Mentalhood. It's about motherhood and every time we did the scripting about the Momzillas and the pressure you go through, the guilt you go through, tiger moms, helicopter moms, I was constantly feeling overwhelmed. But now I have realised that I have a lot of guilt even now.” 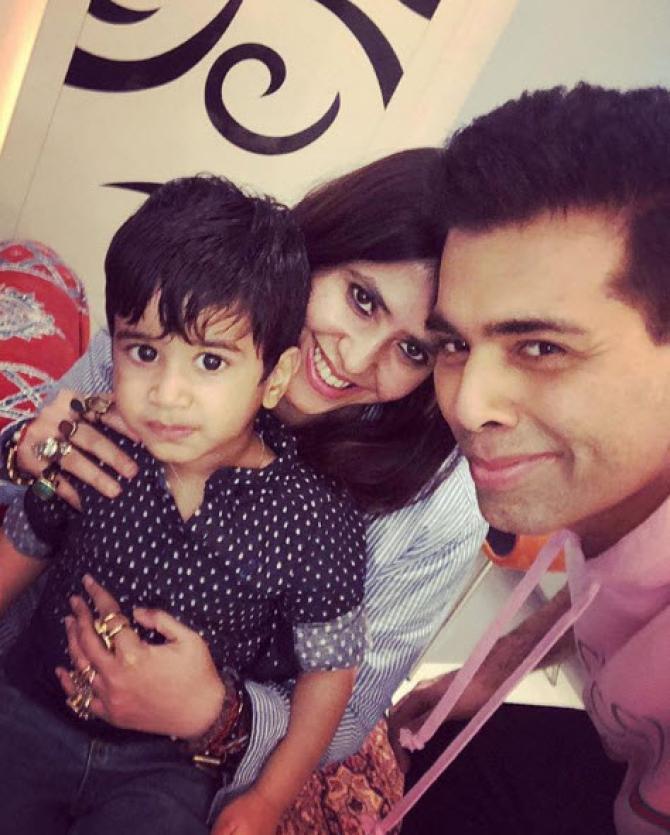 Ekta Kapoor had also shared why she feels guilty all the time after being a mom, “I think the first thing you think as a mother is a guilt. I don't think anyone would say that so openly. I am at work, I am feeling guilty, when I am at home, there is a lot of guilt about not completing the things that I used to normally do. So, you are just dealing with various kinds of guilt. Then it's responsibility and third is a feeling that there's someone there that you want to see grow. It's a bit confusing at this moment. It has been 25 days as of now.” Sharing the support of the family for she being a single mom to Ravie, Ekta had added, “The baby is a joint venture. My family has been very supportive throughout, and my brother has also chipped in to share parenting duties.” (Also Read: Neha Dhupia's Five-Month Old Daughter, Mehr Dhupia Bedi Has Already Traveled 15 Cities)

True that, Ekta Kapoor! Now that we have seen a picture of the awesome-threesome in one frame, can’t wait to see a close-up glimpse of baby Ravie Kapoor!