Finding the perfect wedding outfit is an extremely difficult task. However, there are some brides, who took inspiration from the B-Town divas for their wedding outfits and rocked them. Check them out!

The wedding is one of the most important phases in an individual's life and it is all about fulfilling your dreams and wishes. From stunning decor to fun-filled festivities and wedding rituals to wedding outfits, everything needs to be on point. However, the most time-consuming and difficult task is selecting the pre-wedding and wedding outfits. The brides-to-be spend restless nights and days to finalise their wedding dress. And, after hours of browsing the internet and talking to the designers, the brides finally pick their dreamy wedding outfits.

Whereas there are some brides, who already bookmark their favourite wedding look and outfit and never settle for anything less than that. And, when it comes to seeking inspiration for the bridal trousseau, there's nothing better than taking cues from the B-town celebs' bridal look. When B-Town divas get married, their wedding and their outfits become the talk of the town. And, some brides-to-be have also planned their wedding and pre-wedding outfits by taking inspiration from the celebs. Here are some brides, who recreated Bollywood actresses' outfits for their pre-wedding and wedding ceremonies.

Recommended read: 10 Sabyasachi Brides Who Opted For An Orange Bridal Ensemble On Their Wedding Day The bride, Aanchal Kulchandani had beautifully recreated the same lehenga look that Deepika Padukone had worn on her wedding day. She had donned a bright red lehenga with a beautiful peacock embroidery crafted on it with side tassels attached to the lehenga. Her blouse and dupatta had the 'sada saubhagyavati bhav' border stitched to them. She had accentuated her look by accessorising it with a gold choker set, having light sea green stones dangling from the edges of the neckpiece, maang teeka, and the dangling earrings. Apart from this, she had also worn long kaleeras and broad choodas. The bride, Bhagyasri Taktawala had beautifully recreated the same saree for her wedding which Bollywood actress, Deepika Padukone had worn for her first anniversary. The beautiful bride had donned a sindoori red silk saree, with the statement zari border. Her choice of jewellery for the big day was classy layered neckpieces, a simple nath and a big maang teeka. Her bright red lipstick had gelled well with her minimal makeup look and for a second we couldn't take out eyes off her! One look at Bhagyasri's bridal ensemble and we had realised when there's simplicity in grandeur, it really hits different! 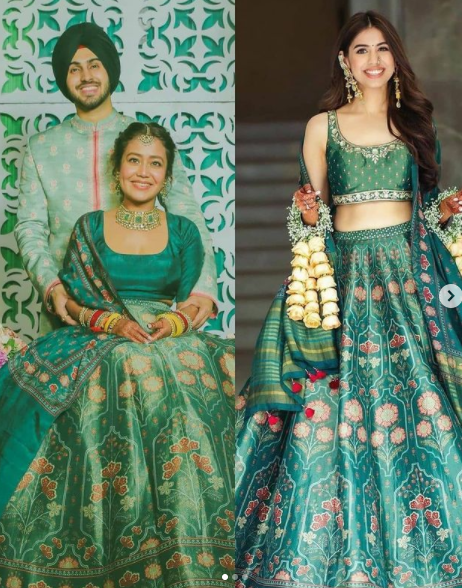 The bride, Jessica Sanghvi had recreated Neha Kakkar’s mehendi lehenga and we must say that she had surpassed the singer’s look for us. While Neha had opted for a quarter-sleeved plain green blouse, the bride, Jessica Sanghvi, had paired her lehenga with cut sleeves embroidered blouse. She had kept her hair loose with light curls and her statement earrings and nose ring had made her look gorgeous. However, it was her floral kaleeras that had caught our attention. With a kangan made of baby birth flowers and the beautiful kaleeras made of yellow roses, the bride had aced her look. 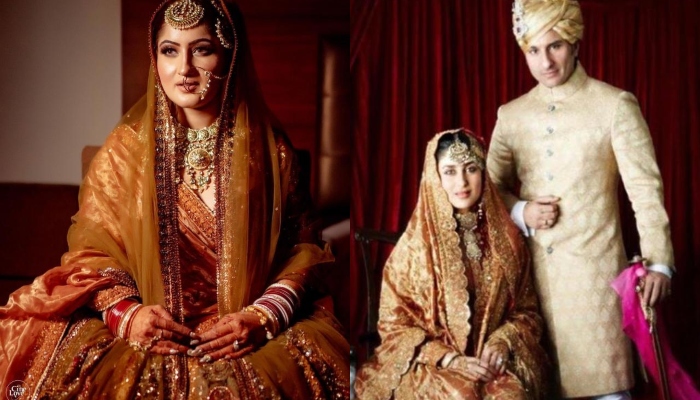 Bride, Lisha, had recreated the royal look of Kareena Kapoor Khan from her wedding day. The bride had opted for the designer, Payal Kayal's golden lehenga with a double dupatta. We had loved how she had donned one dupatta over her head. She had accessorised her look with an oversized maang teeka, a passa, a nath and a choker neckpiece. Famous makeup artist, Gurneet Virdhi had given her a dewy sheen look that was similar to Kareena's look for her nikaah ceremony.

#5. Bride who got inspired by Priyanka Chopra Gorgeous bride, Drishti Vidhani had donned Priyanka Chopra's mehendi outfit for her big day. While Priyanka's every look became a rage in the bridal world, her mehendi lehenga by designer duo, Abu Jani and Sandeep Khosla was loved by all. However, Drishti's mehendi outfit was also designed by the same designer, and it had featured shades of yellow, pink and blue. But what had taken our breath away was the lehenga skirt featuring a thigh-high slit. She had teamed the lehenga with a halter neck-choli and sheer yellow dupatta. The side-slit had made her comfortable to twirl in the lehenga. She had completed her look with matching Aztec print juttis and minimal makeup.

Also read: Plus Size Brides Who Stole The Show With Breathtaking Sabyasachi Ensembles On Their Wedding Day 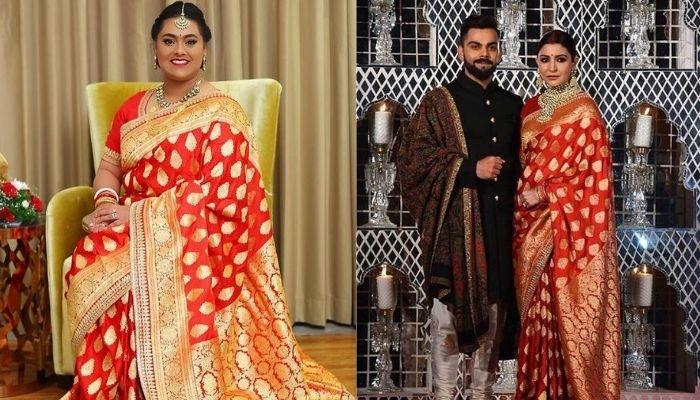 Anushka Sharma had opted for a radiant tomato red and gold Sabyasachi saree for her first wedding reception in Delhi. A Bengali bride, Madhumita Ghosh from Pune had opted to wear the same saree for her wedding, and she had nailed the look with utter perfection. Donning the same tomato red and gold Banarasi saree for her wedding, Madhumita had let her attire take over the grandeur and had kept the rest of her look pretty simple, which was breathtaking. Madhumita had donned two-layered, green and golden neckpieces and a matching maang teeka on her head. Keeping her hair tied in a simple bun, the bride had done her own makeup, and we simply couldn't take our eyes off her!

#7. Bride who got inspired by Sonam Kapoor 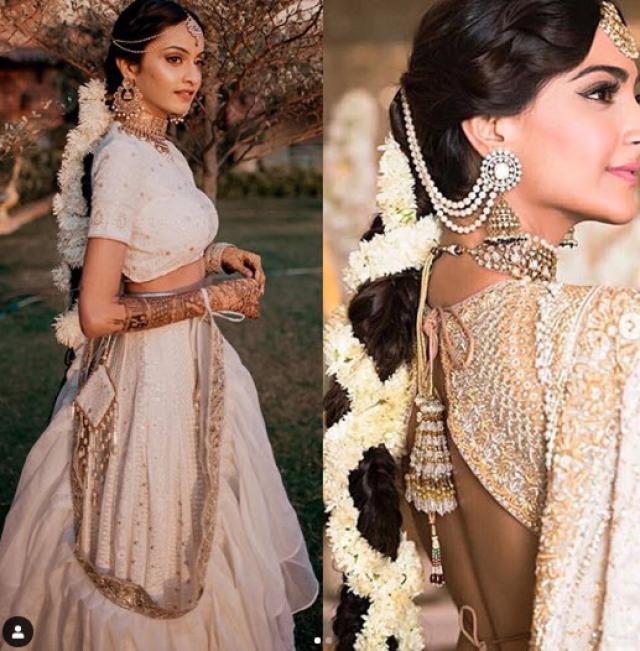 Sonam Kapoor's wedding had given many 'outfit goals' to the brides-to-be as all her outfits were stunning and exceptionally beautiful. For her mehendi and sangeet ceremony, the actress had opted for a cream-coloured lehenga-choli from the designer duo, Abu Jani and Sandeep Khosla. Her outfit had featured golden zari work all over it. She had paired her lehenga with a backless choli and a matching dupatta. The bride, Anusha Bhatt had recreated the entire look and had looked stunning at her mehendi ceremony. Anusha had revamped the outfit for her own and had also taken a cue from the mogra flower strings laced in her braid. 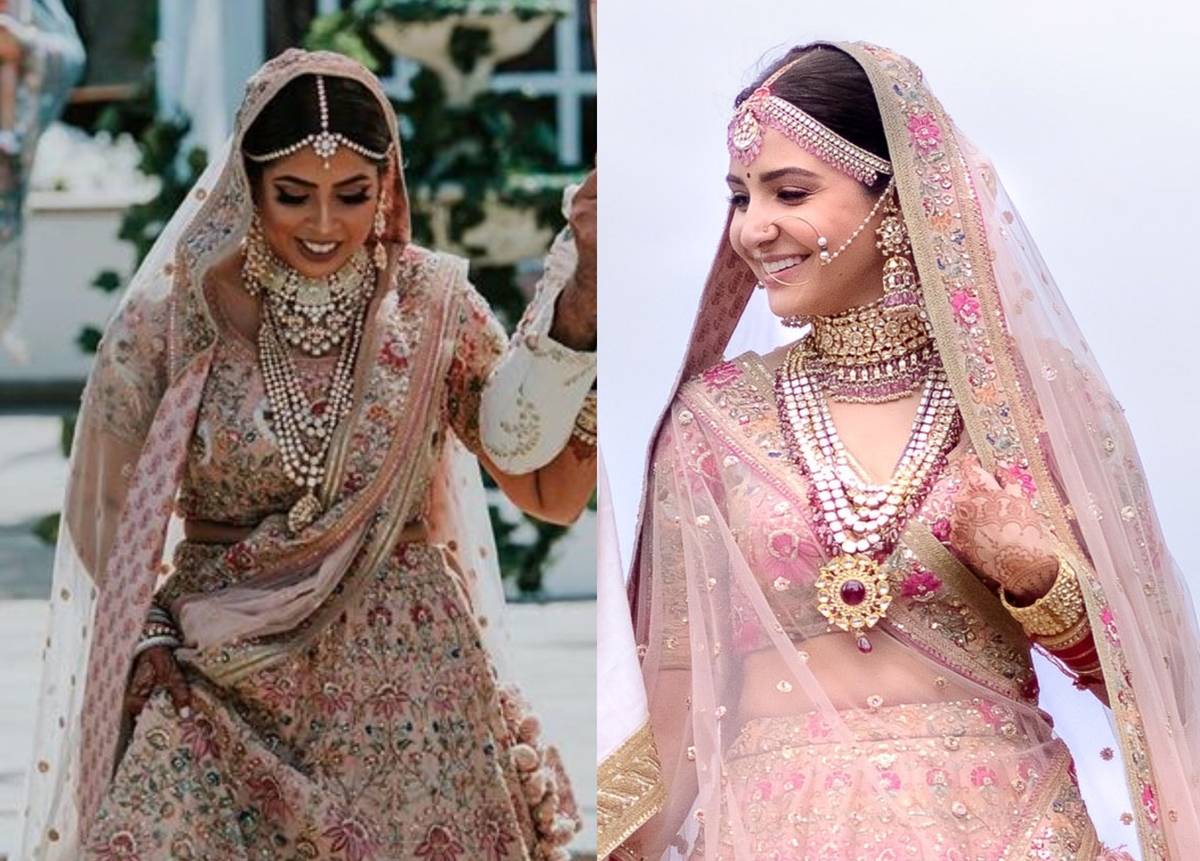 Anushka Sharma had looked gorgeous in a Sabyasachi pink lehenga at her wedding with Virat Kohli. A bride from Abu Dhabi, U.A.E. named, Sonam Basantani, had recreated the exact same bridal look as that of celeb bride, Anushka Sharma. The bride had donned a pink lehenga featuring floral embroidery adorned with crystals and pearls, designed by the ace designer, Sabyasachi Mukherjee. Sonam had opted for heavy jewellery which had included a pair of neckpieces, a heavy choker, a maang teeka and some bangles. Her jewellery and bridal make-up were quite similar to Anushka Sharma, apart from her nose ring. Deepika Gauba's wedding ensemble had instantly reminded us of Anushka Sharma's reception look. For the D-day, the bride had ditched the heavy lehenga and had opted for an exactly similar red saree like Anushka. Deepika was also a Sabyasachi bride and had looked dreamy on her D-day. However, instead of choosing a plain red blouse, she had donned a golden printed blouse and a net dupatta that had accentuated her look. We had loved how minimal her makeup was unlike other brides, she had chosen to keep her hair open, with loose curls. Deepika had accessorised her look with a choker neckpiece, a pair of earrings, maang teeka and an oversized nose ring. She had kept her makeup subtle with open hair. 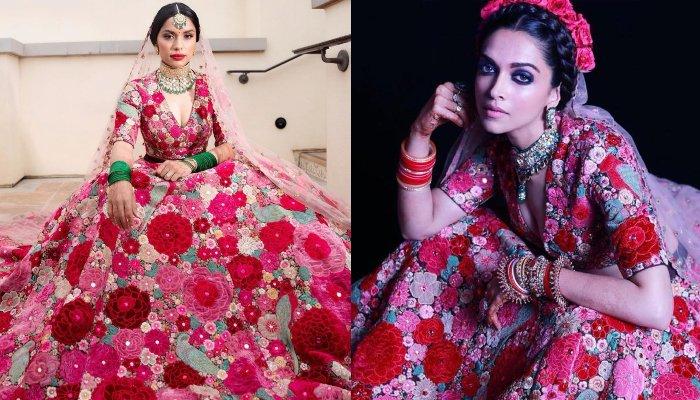 The bride, Riya Patel had sported the same 'Dil Guldasta' lehenga that Deepika Padukone had donned on her post-wedding party, and had looked every bit gorgeous! NRI-bride, Riya Patel had looked ethereal in the same lehenga and green polki jewellery from Sabyasachi Mukherjee’s collection. Riya had accessorised her look in green-coloured jewellery, which had included her heavy choker neckpiece, a maang teeka, round-studded earrings and absolute plain green bangles.

So guys, what do you have to say about the brides recreating Bollywood actresses' bridal look on her wedding day? Do let us know!

Don't miss: The Bride Designed Her Red Wedding Lehenga From Scratch, Styled It With Gold And Emerald Jewellery