Real-life couple, Mundheep and Amandeep, before their Sikh wedding, went to meet the former's ailing grandfather at the hospital and what happened next, will make you go weak in your knees!

Most of us, who have extremely fond memories of a happy childhood, credit their grandparents for all the happiness and the memorable shaitaani they did in their life. When your parents would say no to that toy that you had demanded and would roll on the streets crying, your maternal/paternal grandparents would always adhere to your incessant pleas and give you all that you want. The connection that we have with our grandparents can’t be limited to words and how we wish that they could forever be with us! (Do Read: This Couple Reminded Us Of 'Bajirao Mastani' With Their Unique Ensemble For Their Wedding Day)

We would often find our grandparents talk about a raja, who would come via ghore ki sawaari and marry us! Somewhere deep down, we grew up to believe their dictions and when the same happened for this real-life bride, we couldn’t combat our tears! While almost every bride-to-be yearns for their knight to come riding a horse, real-life bride, Mundheep’s hubby, Amandeep Singh (also known as inkquisitive) came riding on a car to take his bride away. Soon after their Sikh wedding, the couple went to meet the former’s ailing grandfather at the hospital and what happened next, will make you go weak in your knees! 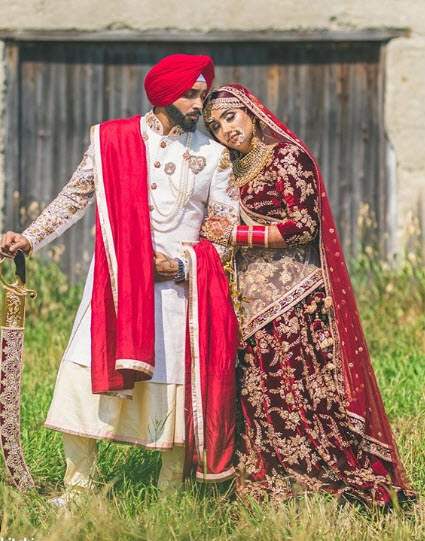 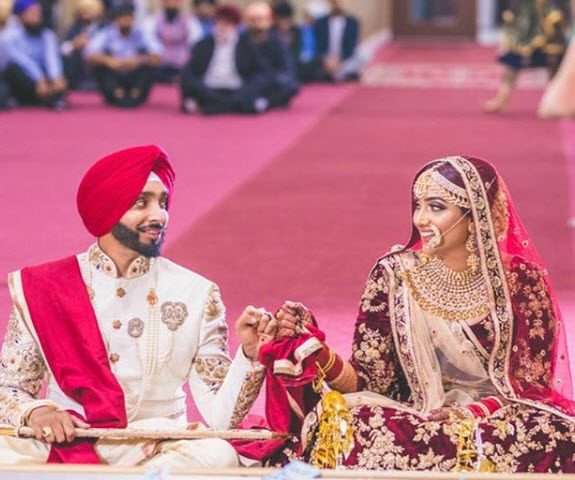 A cake artist by profession, Mundheep married the man of her dreams, professional illustrator, Amandeep Singh on August 05, 2018, as per a Sikh wedding. While we will share their complete wedding story with you, this video of theirs took our breath away. In the video, an all decked-up Mundheep and Amandeep are seen visiting the former’s grandfather, who was admitted to the hospital, to take his blessings after they went for their Anand Karaj ceremony. As soon as Mundheep and Amandeep saw her grandfather, all three of them broke into bouts of tears. Later in the video, we can see Mundheep kissing her grandpa’s forehead and he, watching his poti’s Anand Karaj wedding via video call. The entire family couldn’t hold back their tears and was seen sharing a super-emotional moment with one another.

Isn’t the video extremely heartfelt? Now let us tell you all about Mundheep and Amandeep’s pre-wedding and wedding functions, one by one. For the couple’s engagement and pre-wedding photoshoot, Amandeep’s bandhgala collar was the show-stealer. Wondering why? His bandhgala collar had a graphic illustration of his then to-be wife’s eyes on it! The couple had also done a beautiful photoshoot that very day. No wonder Amandeep surely stole the thunder that evening, but Mundheep too had looked gorgeous in a purple lehenga, nath, passa and red hair. (Must Read: Miss India Earth, Hasleen Kaur Looked Gorgeous In A Red Sabyasachi Lehenga For Her Sikh Wedding)

Madhuri Dixit Wishes Everyone To Get A Husband Like Her, Reveals, 'He Encouraged Me For Singing'

Mohanlal's Wife, Suchitra Hated The 'Lucifer' Actor Initially, Here's How She Fell In Love With Him 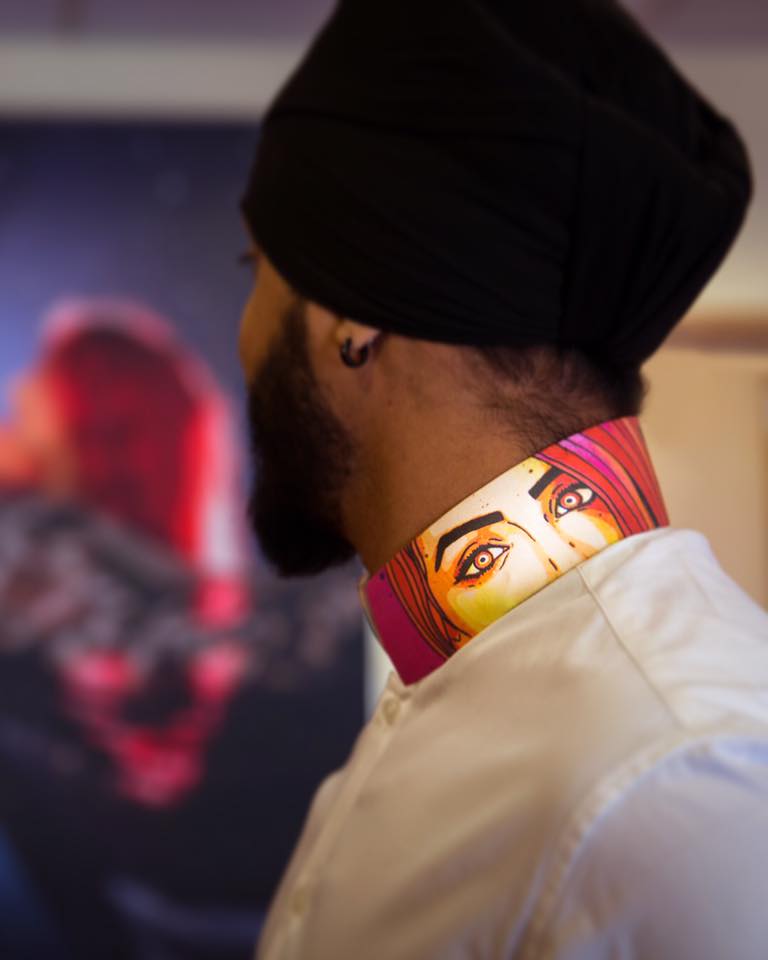 Mundheep and Amandeep had a dual wedding- a civil wedding and an Anand Karaj one. It was on August 01, 2018, when the couple got married in a civil wedding ceremony and had looked resplendent in Christian wedding attires. While Mundheep had looked ethereal in a white gown, minimal makeup and a white veil complementing her red hair, Amandeep’s complementing waistcoat, tie, turban and the black blazer must have given a zillion goals to millions! Sharing their first-ever picture as a married couple, the couple’s joint Instagram account named ‘Mr and Mrs Ink’ captioned it as “Well, it’s official. We’re married!” 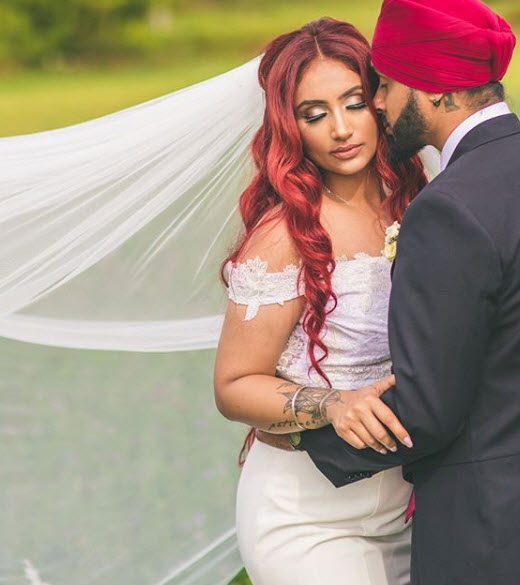 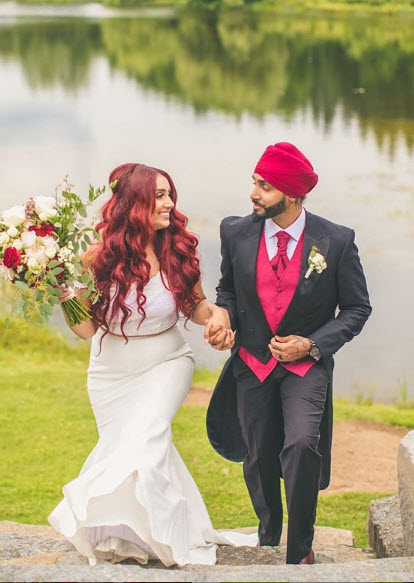 And on August 05, 2018, Mundheep and Amandeep got married as per Anand Karaj wedding rituals. Mundheep had looked absolutely gorgeous in a brown velvety and silver-sequinned lehenga, which she had teamed with heavy golden kundan Maharani neckpiece, nath and a heavy matha patti. Her hubby, Amandeep wore a white bandhgala, moti haar and a red turban. On the completion of their first anniversary and even from the do, a vast array of pictures from their wedding were unveiled by the couple on their joint Instagram handle. 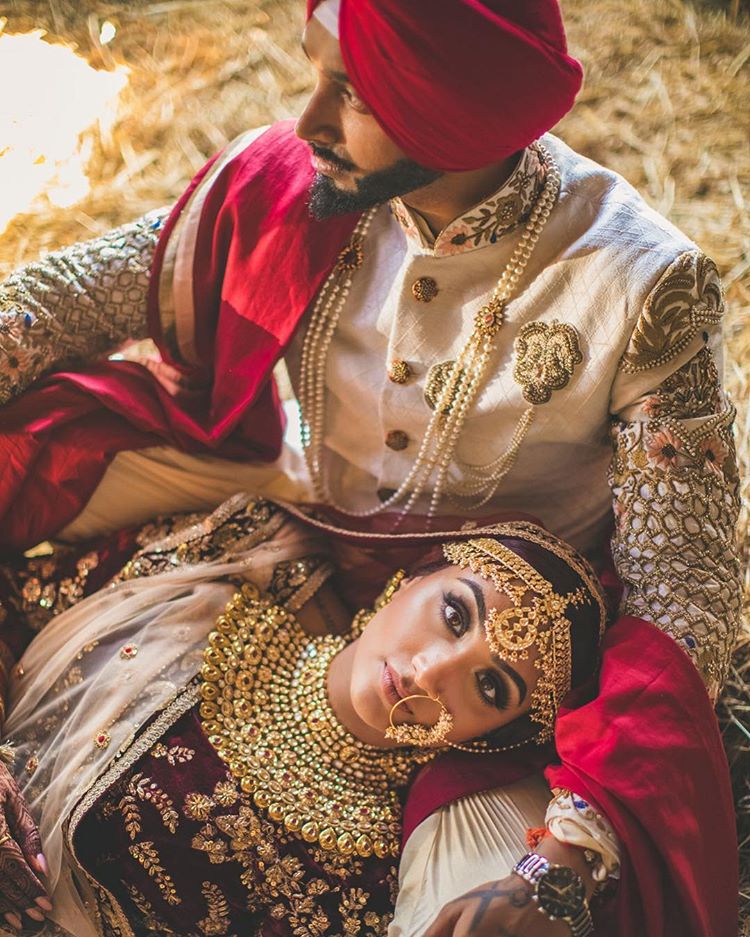 While you are still awed by the pictures from Mundheep and Amandeep’s wedding, don’t forget to take a stupendous view of the duo from their two wedding receptions. For their first wedding reception, the couple completed each other in light-hued apparels. However, the best part was a special surprise that the duo had to offer to one another. Mundheep had baked and designed a giant 8-tier cake for her hubby (don’t forget, she has some terrific cake making traits to her credit)! Her hubby, Amandeep created his wife's live portrait in front of everyone in just 15 minutes. However, the catch was that the picture was made upside down by him! 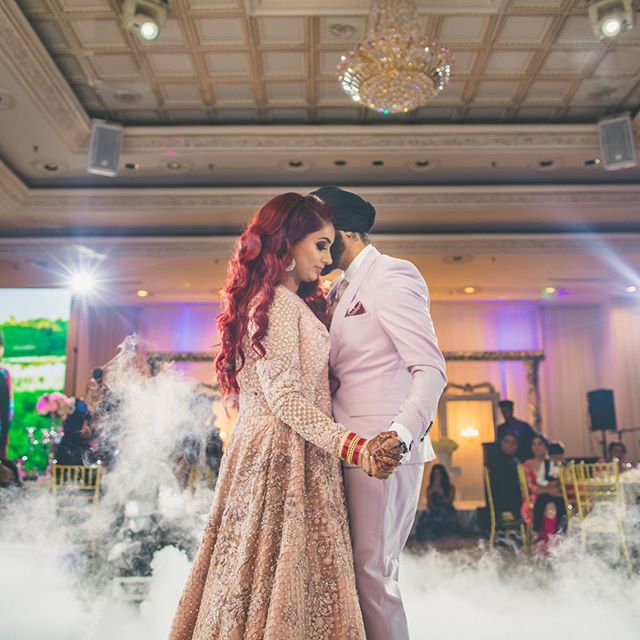 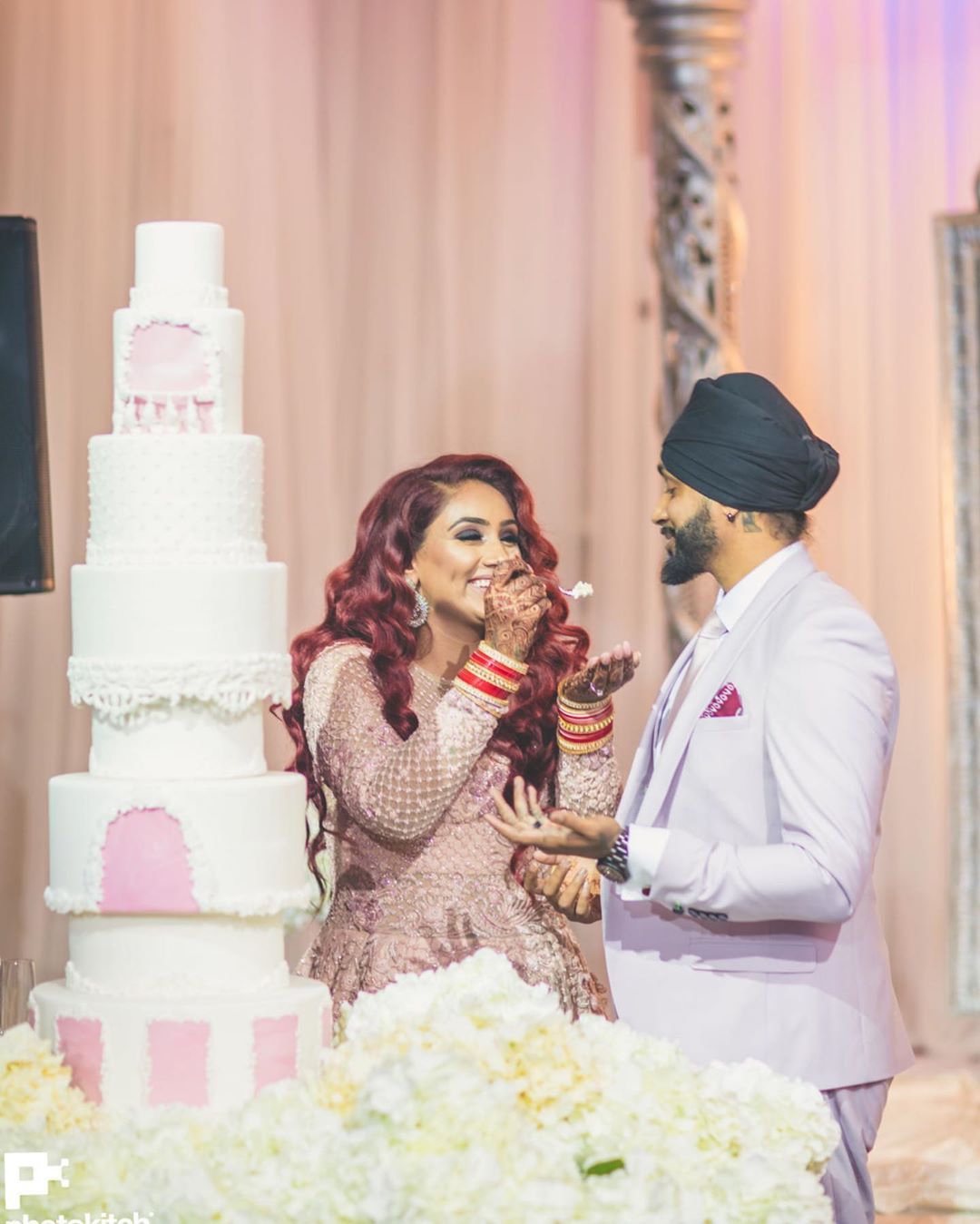 Once you stop making hand-hearts for them, take a look at the grand finale that marked an end to their wedding festivities. The duo had danced away all night in a shimmery, blue gown, chooda evicting out that ‘just married’ glow, red hair doing all the magical contrast possible to her blue dress and he, looking dapper (as usual) in a blue turban and black sherwani. (Also Read: A Curvy Sabyasachi Bride Opted For Broad Beautiful Neckline At Her Castle Wedding And Looked Amazing) 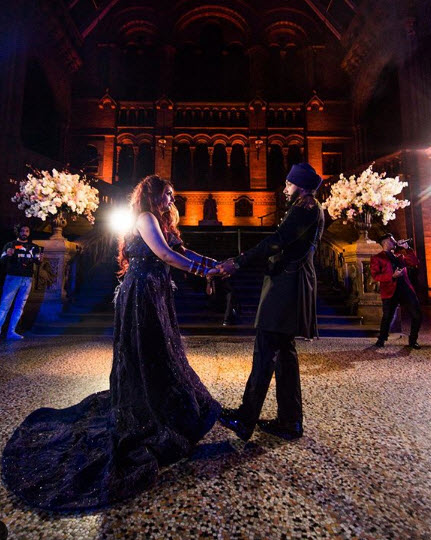 Mundheep and Amandeep are a perfect exemplar of ‘two in body and one in mind’. From never failing to express their love for one another to posting adorable pictures from their life of ‘happily ever after’, all that we want them to say is “Tum dono bhi na!” and blush on their behalf. On Valentines Day 2018, Amandeep took to Instagram and posting a dreamy picture from what looked like their shoot, posted a heartfelt note for his ladylove, Mundheep. Reading the open letter for his ladylove, we bet that some of you are sure to shed some happy tears! The letter written by Amandeep began with “I used to get jealous that people could see you when I couldn’t because I was miles away. Matter of fact I still feel that way now.” 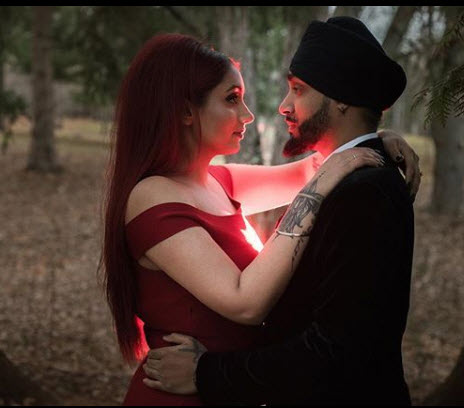 Amandeep’s heartfelt open-letter had continued, “I also used to get jealous at the kids at school who would get the flowers, the cards or the gifts and nobody to give me none. There’s a lot of time, patience and much experience that has paved my way to finally find you and finally feel content - I’m so thankful for the lessons and the special moments with you. A long-distance relationship is something that has been one of the hardest things I’m seeing through but worth every bit of the happiness of seeing you and the struggles of not because we’re almost at the finish line. We learnt that no time is too long and no distance is too far. I stand by it and I hope others continue to.” Amandeep’s letter concluded with “I’m writing an open letter on social media for others to read and it’s not to show off or dishearten those who do not have a lover, and it’s certainly not to discomfort lovers who don’t know how to show affection as such. I’ve always kept my private life on the low. This, however, is more so a moment for me to finally be able to share, that today, on this #ValentinesDay though you’re not by my side, I’m blessed to have a fiancée in you Mundheep. Thank you for making me feel like the kid who finally got his dream girl - because that is what you are to me. Till I see you again, you’ll always be my favourite notification, I love you Mundheep. Happy Valentines Day. Aman.” As Mundheep and Amandeep complete a year and two months with each other, we hope for nothing but just the best ever for these two!

Madhuri Dixit Wishes Everyone To Get A Husband Like Her, Reveals, 'He Encouraged Me For Singing'