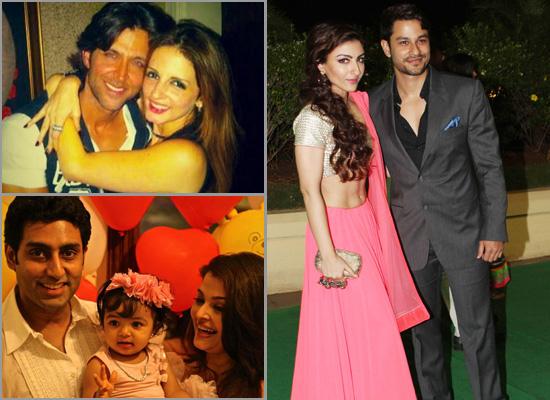 These days, a new trend has started among our Bollywood celebrities– to announce everything through social media. Be it about their movies, vacations, night outs, promotions, pictures or anything else, some celebs love posting each and every update about it on social media. But what has been the latest fad is that Bollywood stars have taken it to these social networking websites to announce their relationship status. Whether it is about their relationship status or becoming parents, the news is updated within seconds on Facebook and Twitter before it reaches anyone else. From John Abraham and Hrithik Roshan to Soha Ali Khan and many other stars, use these websites to announce their marriage, proposals, parenthood and even divorce. Let us take a look at which all stars have used social networking to reveal their personal side.

Dia Mirza took to Twitter to share her engagement news with her fans. When beau Sahil Sangha slipped the ring on her finger, the actress tweeted, "Officially Engaged", on her profile along with a photograph. All this happened while they were in Florida, USA for IIFA awards.

Recommended Read: 10 Marriage Lessons that Fathers Must Give to their Daughters

Soha Ali Khan too took the same route and broke the news that her long-time beau, actor Kunal Khemu proposed her in the city of love, Paris, on Twitter. She also revealed there that she replied with a “YES!”

“It gives me great happiness to share with you all that Kunal proposed to me in Paris with the most perfect ring in the world and I said yes,” Soha tweeted on 23 July, 2014. The couple even posted an Instagram pic with Eiffel Tower in the background.

Recommended Read: Bollywood Couples Who Are Ready to Get Married This Year

Not only marriage announcements, but also divorce declarations are now being done through social media. When Hrithik Roashan and Sussanne Roashan Khan decided to part ways, the actor took on Facebook to confirm the news. (Read Their Complete Divorce Story)

“Sussanne has decided to separate from me and end our 17-year relationship. This is a very trying time for the entire family and I request the media and the people to grant us our privacy at this time,” he posted on his official Facebook page.

The most surprising revelation came from John Abraham in January 2014, when he announced his marriage to his long-time girlfriend Priya Runchal.

On January 1, John wrote on Twitter- “Wishing you and your loved ones a blessed 2014! May this year bring you love, good fortune and joy. Love, John and Priya Abraham.”

Recommended Read: 8 Secret Things about Marriage that Couples Should Know

Even VJ-turned-actor Rannvijay Singh, took the same route to announce his wedding with his girlfriend Priyanka Vohra, on 14 April 2014. He thanked all his well-wishers.

Rannvijay tweeted, “I feel so blessed to get so much love from all of you, thanks for all the love and wishes! And now Prianka is getting so much love also thanks.”

What’s more? The Roadies host went a step further and made his fans a part of his wedding by bringing each and every detail of it to them via a webshow that was teleasted on YouTube.

“Beloved tweeple...With great pleasure I would like to announce my wedding with @peterhaag on the 23rd of last month at a thousand year old monastery in Austria. We seek your blessings and good wishes, and apologize for the delayed announcement due to a family tragedy,” Celina tweeted.

When Abhishek and Aishwarya’s fans were eagerly waiting to hear about the arrival of their baby, and the media was going nuts over who would break the news first, it was Twitter that got all the attention!

Yes, instead of going on to the cameras, Abhishek shared the news via Twitter. "IT'S A GIRL!!!!! J)))),” the elated father tweeted.

Not to Miss: Parenting Lessons from 7 Inspiring Bollywood Dads

Mahesh and Lara too!

And, same for Ayesha Takia!

No one had a clue that actress Ayesha Takia was pregnant, but thanks to Twitter whole tinsel town and her fans came to know about it. Her husband, Farhan Azmi, by saying, “Allahu Akbar Allahu Akbar" it's a BOY!!” he tweeted.

Apart from all these celeb couples taking it to social networking to make their extremely personal relationship announcement, even YRF announced Rani Mukerji and Aditya Chopra's wedding on Twitter as well.

On the morning of April 22, 2014, Yash Raj Film's official Twitter handle announced, "Aditya Chopra & Rani Mukerji got married last night on 21st April in Italy. We wish the couple a very  happy married life." This was followed by official press releases from both Aditya Chopra and Rani Mukerji's side.

Social media has definitely become a big platform for stars to share their share of news. A short, sweet and hassle free way of making announcements and reaching out to the fans instantly!