Every mom is a supermom, and here is our token of love to all the mothers, who are selflessly working hard for their kids. Check out these celebrity mommies, who inspired all of us!

No matter whether we are six, twenty-six or thirty-six, our mothers will always worry about us. They are the ones, who will know our mood within two seconds. Whether we are sitting in the next room or miles away, her first question will always be 'kuch khaaya'? Believe it when we say, 'No one, we repeat, no one can ever take her place'. However, a mother can play many roles in her child's life. After all, that is the power of a mother's love. According to the Oxford dictionary, the definition of a mother is a female parent, but she is more than just a parent and no words can ever describe her.

There is no denying the fact that every mom is a super mom. Every mother always knows what's best for her baby and she makes sure to perfectly balance her life in order to nurture her kids. But today, we are highlighting the efforts of celebrity mommies, who normalised the whole concept of motherhood for us. Those celeb moms, who resumed work soon after their deliveries and never shied away from showing off their baby bump. So, hop on as we take you along the journey of some super mommies, who gave all the pregnant ladies a breather.

Also Checkout: Dia Mirza, Neha Dhupia And 8 Other Celebs, Who Got Massively Trolled For Announcing Their Pregnancy 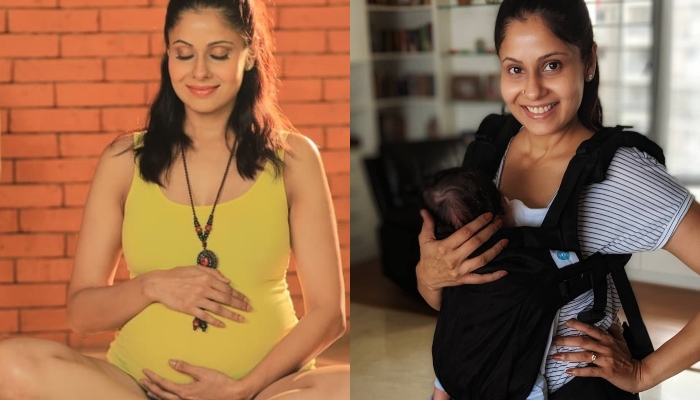 Television actress, Chhavi Mittal had created a stir on social media with her pregnancy blogs. She had talked about every notion surrounding the pregnant mommies and their bump. However, right after three days of her delivery, she had started her work from the hospital room. The actress had written a long note on the balancing act on her Instagram handle. Her note could be read as:

My feet are so swollen that even flip flops don't fit. So is the rest of my body. My head hurts like it'll explode, due to the spinal tap. I've gone deaf in one ear, also an extremely rare side effect of the spinal tap. I'm supposed to drink 5 litres of water, and getting up to go the loo takes 15 minutes. Lying down is the only position that gives me comfort, sometimes I even eat in that position. But right now, at 1am, I'm doing some office work, when the baby sleeps and there's some peace, because @shittyideastrending 's new Web-series #BinBulayeMehmaan had to be launched today. Within just a month, Chhavi was back to her office desk, managing her little baby, Arham and her meetings. The actress had shared another note on her Instagram handle. She had revealed how her 'baby boo' stayed calm during the long meetings and story narrations. Her note could be read as:

Little Arham and I resumed office this Thursday. It's a place that he's spent most of his time at while he was in my tummy.. no wonder he was so calm in the midst of discussions, story narrations, meetings. Little entrepreneur in the making completely at home in office! Oh btw, mommies, don't rush to get back to work after the baby, I'm taking it real slow, with just a few hours at the moment at the time of mine and Arham's convenience. Besides I have created my office extremely comfortable for us. Incidentally, I also feel the most at home in office! 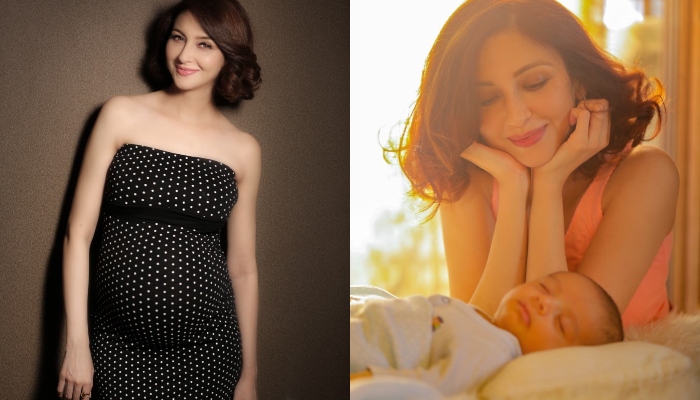 Saumya Tandon, who is known as 'bhabhiji' from Bhabiji Ghar Par Hain, had given a sweet surprise when she had shared her pregnancy announcement. Everyone was eagerly waiting for her to hop on the motherhood journey, and on January 14, 2019, the actress was blessed with a baby boy. Saumya had shot for her serial, Bhabhiji Ghar Par Hain till the end of her trimester. And within four months, she had resumed shooting for her show, Bhabhiji Ghar Par Hain. In an interview with The Times of India, Saumya had talked about the same and had said:

I believe motherhood should not stop a woman from achieving what she wants in life. I feel I am stronger now and more driven towards my dream. Hats off to all the women who are coming out and breaking all the stereotypes and celebrating marriage and motherhood. I really want the trend to go on because a woman doesn't become less desirable if she gets married or delivers a baby. 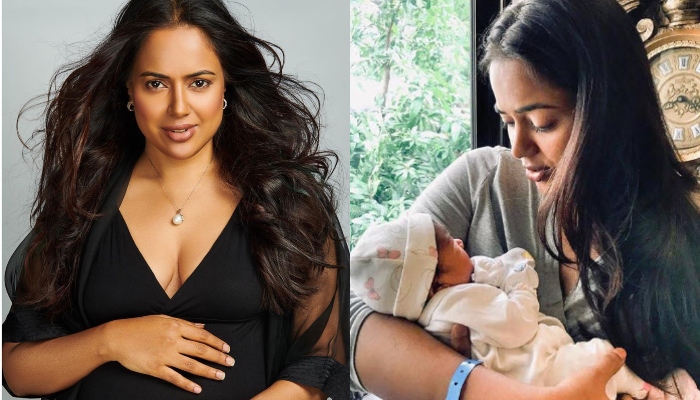 Bollywood actress, Sameera Reddy has set a new bar for all the mommies by inspiring them with her pregnancy journey. When she had gotten pregnant with her second child, she had shared her 'first pregnancy story' and how she was diagnosed with postpartum depression. However, during her second pregnancy, Sameera had openly talked about the 'never heard and never discussed' subjects like postpartum depression, weight gain, and embracing your real self and the bump. The actress had worked till the last day of her pregnancy tenure. In an interview with SpotboyE, Sameera had shared:

I was on an ad shoot on Thursday, and in fact, my doctor had just checked me on Wednesday. I am at Women's Hospital in the able hands of Dr Gayatri Rao. She had said that we could go ahead with a C-section as it was required in my case and I should tell her when I would like to get it done. I said, 'Let's do it on Friday. As such, yesterday was Ekadashi- a very big, holy day. My husband clicked pictures in the labour room. He clicked his first selfie with our daughter. Bollywood actress, Kareena Kapoor Khan has redefined motherhood for many mommies. Plus, she has given courage to millions of mothers to go out and work guilt-free. Over the years, Kareena has matured from the sassy 'Poo' to the royal 'Begum', who knows how to strike a perfect balance between her work and her family. The actress had made headlines when she had walked the runway during the last tenure of her first pregnancy. In an interview with Filmfare, the actress had stated how she balances her work and family. She had said: 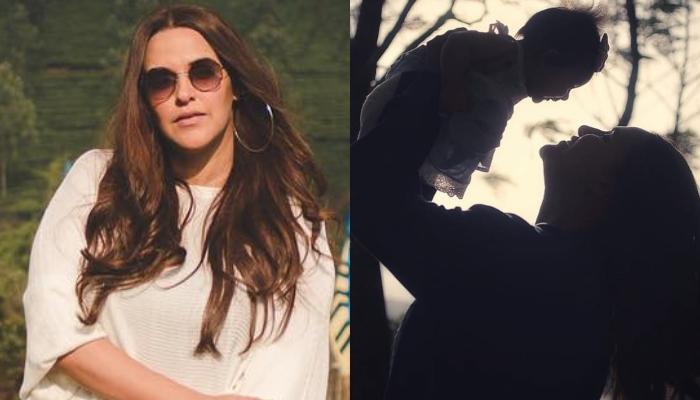 When Bollywood actress, Neha Dhupia felt the first flutter of her baby her entire world changed for better and in that one time, she knew what love looks like. On November 18, 2018, Neha Dhupia Bedi and her husband, Angad Bedi had welcomed their little angel, Mehr Dhupia Bedi. The actress had left everyone amazed when she had resumed work within a few weeks of bringing her baby girl home. In an interview with the PTI, Neha had talked about why she had resumed work early and had said:

"If I have to mould myself into a certain character, it could be a little while before I could commit myself to it. I don't know physically what the character will expect out of me. I have worked through all shapes and sizes. I was pregnant when I did Roadies and am coming back for a new season after becoming a mother. But for me to play a part, something like a Tumhari Sulu, I need to be there physically 100 per cent. But I won't go slow. I want to be a mom, be on stage, do everything." 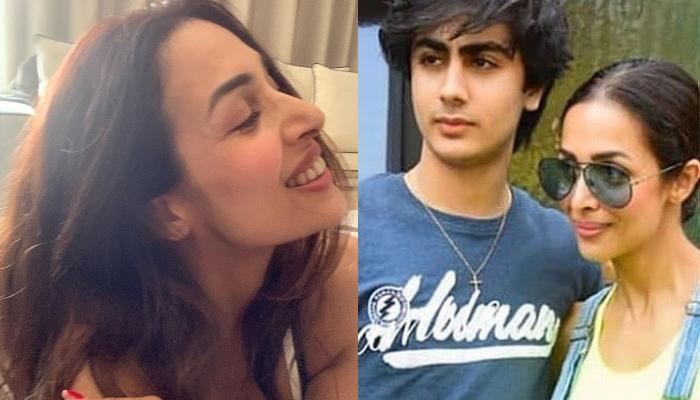 Malaika Arora is the most-loved fashionista, who has been ruling the hearts with her fashion skills and charismatic personality. The diva has been beating her 40s with ace and no one can believe she is a mother to an 18-year-old boy, Arhaan Khan. For those who don't know, Malaika was one of the first actresses in the B-town, who had worked during her pregnancy and right after it. However, no one ever talked about it as there was no platform back then. On Neha Dhupia's show, No Filter Neha, the actress had shared:

"I worked before, I worked through, I worked right after, exactly 40 days after. I took that 40 days off of my baby because my mom was like 'No you have to!'. And Exactly 40 days after I was up and about and shooting and working. You know this is so far back. My son is 17 years old. It’s amazing to see so many women today you know who are mothers, who work right through their pregnancy and after because otherwise everybody thinks it’s 'Chalo pack up karke niklo'. So I guess back then when I actually worked throughout, it was pretty amazing, nobody actually knowing about it or talking about it because there was no such platform to talk about it but yeah I remember I first started off with full length, then I went mid, then I went 3/4 and then waist and then bust and then neck till then it was only one eye, one mouth, one lip, one ear." 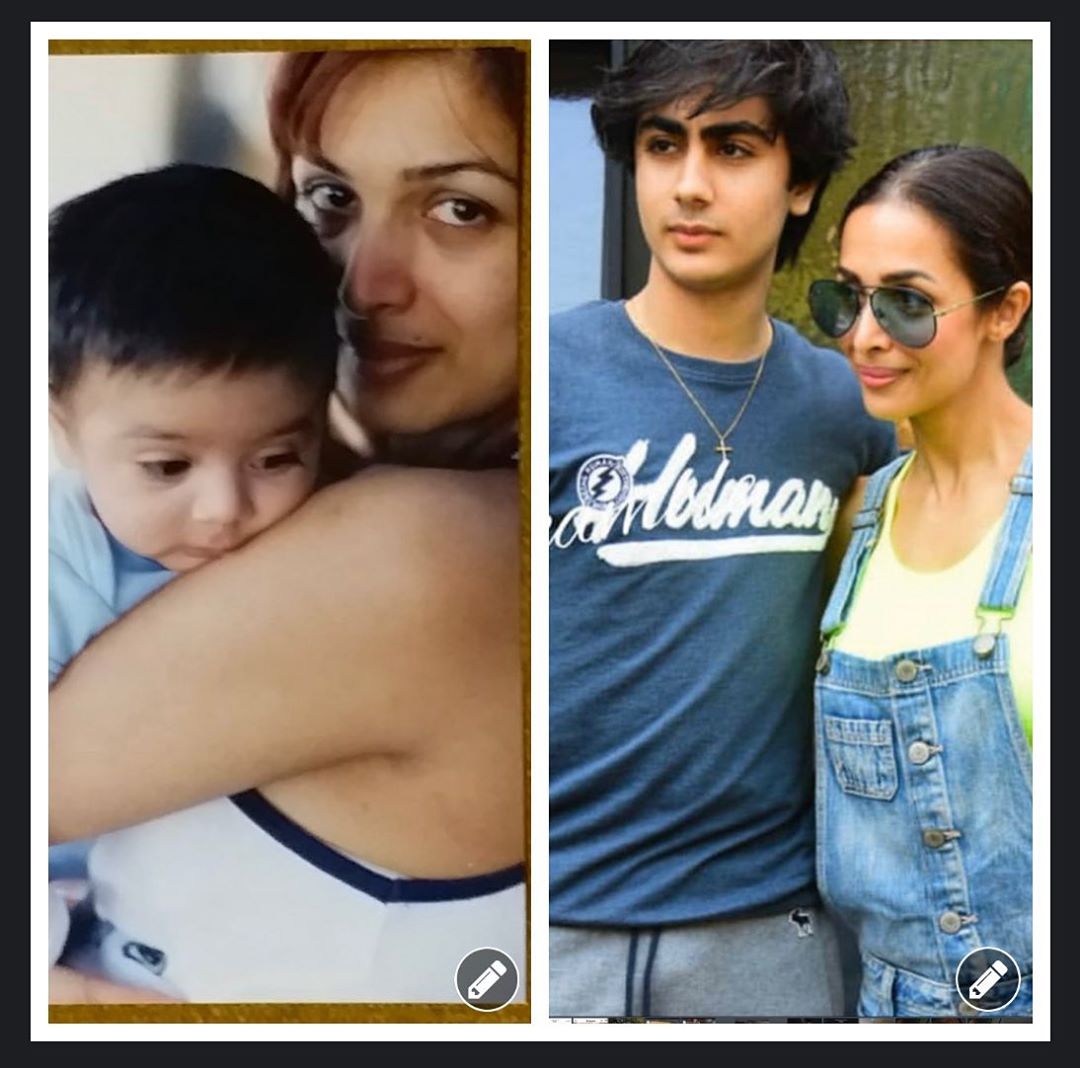 Malaika had also added that working during her pregnancy had helped her and had said:

"I have been through that whole process so yeah I think the best part about my pregnancy was the fact that I could just be. I was not sitting at home and crying and saying oh god! I'm in pain when will this be over and done with. I worked throughout and I think that's what kept me going."

Well, motherhood is a beautiful phase and a mother should enjoy the whole process, no matter whether she is working during her pregnancy or right after her delivery.