Sushant Singh Rajput’s untimely death had created quite a stir in the nation and the wrath was faced by Bollywood and TV celebs. With a series of hidden facts about SSR’s life coming into the limelight, one shocking fact of ‘consumption of drugs’ had startled the nation more, opening the nexus of drugs in the entertainment world. It had all started with Rhea Chakraborty's arrest in the case related to drugs and since then, many A-list Bollywood and TV actors have been summoned. What had started as ‘Sushant Singh Rajput’s Death Case’ has now shifted to ‘Bollywood Drugs Nexus’. (Also Read: Tusshar Kapoor Receives A Birthday Surprise From Son, Laksshya Kapoor On His 44th Birthday [Video])

For the telly world, it had started with Abigail Pande and Sanam Johar's house being raided by the NCB and summoning the two. Post this, many names had made it to the headlines in the nexus of drugs. The latest ones to join the list are comedian husband and wife, Haarsh Limbachiyaa and Bharti Singh. Bharti and Haarsh’s house has been raided by the NCB. Scroll down to know more!

Karanvir Bohra Teases Bharti Singh About Her Pregnancy, Expects Her Baby To Arrive In December 2020 As the Narcotics Control Bureau is tracking celebs under the nexus of the drug, Bharti Singh and Haarsh Limbachiyaa have come under the scanner. According to ANI, NCB conducted a raid at Bharti Singh’s residence at Mumbai and more details about the raid are awaited. Their tweet can be read as “Narcotics Control Bureau conducts a raid at the residence of comedian Bharti Singh in Mumbai: NCB #Maharashtra." According to a report in ABP news, the raid is being conducted by NCB in Andheri, Lokhandwala and Versova area. The two have now left for the NCB office.

For those who don't know, Bharti Singh and Haarsh Limbachiyaa had first met each other on the sets of Comedy Circus, wherein, Bharti was one of the contestants and Haarsh was a scriptwriter. While it wasn't 'love at first sight', they had definitely felt a connection when they had worked together. Later, Harsh had proposed Bharti, and after dating for a few years, the two had tied the knot on December 3, 2017. Now, they are living their 'happily ever after' together. 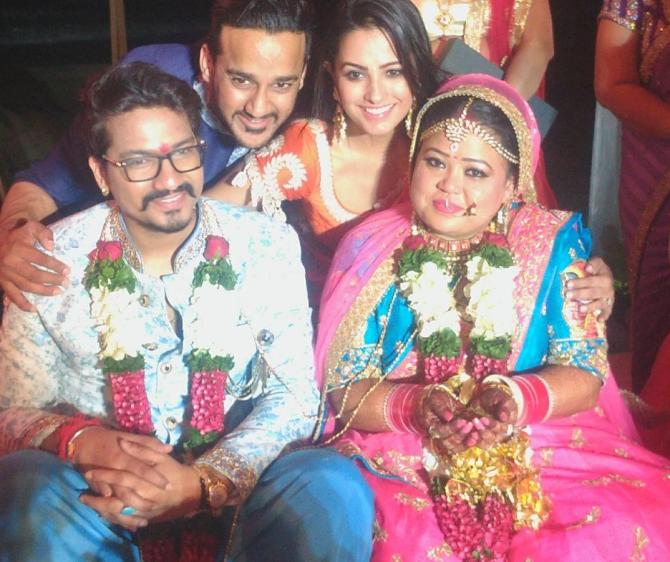 It’s been almost 3 years to their wedding and the duo is often asked about their pregnancy plans. When Bharti was hosting India's Best Dancer with her darling hubby, Haarsh, in one of the episodes, they had promised to welcome their baby in 2021. During the show, when Haarsh and Bharti had performed a romantic dance, judge, Geeta had said that she has always seen Haarsh saying romantic things about Bharti, but she has never seen the latter reciprocating it. To this, Bharti had said that ever since she has understood love, Haarsh has been synonymous to romance and love for her. She had further added that she doesn't believe in show-off and she begins her day by looking at her God (Haarsh). She had also shared that she can’t think about her life without Haarsh. (Don't Miss: Gauahar Khan And Zaid Darbar To Tie The Knot On This Date At This Grand Venue [Details Inside])

On the same show, Bharti had made the big announcement of embracing parenthood in 2021 on national television. While holding a dummy baby in her hands, Bharti had said, "This is a promise on the national TV. This baby is fake in 2020, but this will become a real baby in 2021." To this, Haarsh had added that they will be anchoring the next season holding their baby, and Bharti had further added that she might be pregnant during the next season. Talking about their love story, in an interview with the Hindustan Times, Bharti had shared how Haarsh loves her inside out. She had shared, "We might have progressed in other areas, but the Indian mentality remains the same. Society still differentiates between girls and boys. Parents think who would marry their daughter if she gets fat. When a boy is fat, he isn’t asked to lose weight, but a girl has to be slim in order to get married. Girls go into depression due to the pressure. They go to gyms and work out like crazy to lose weight, and that might not be easy for everyone." (Recommended Read: Mahhi Vij, Jay Bhanushali, Khushi And Rajveer Dance On 'Bala' As Tara Goes Bald Post-Mundan [Video]) What are your views about Bharti and Haarsh’s involvement in the drugs nexus?