For the first time ever, Tahira Kashyap Khurrana got a fringes hairstyle and flaunting the same, she posted two videos on her IG handle. Check out how Ayushmann Khurrana and Aakriti Ahuja reacted.

Just because you have spent a couple of years with your partner doesn’t mean you stop putting efforts to keep the spark in your relationship alive. It’s easy to get caught up in the day-to-day routines so, even a few little surprises and compliments can help rekindle things. Though relationships aren't rocket science, they aren't a cakewalk either, and it requires efforts from both partners. Who better than teenage sweethearts, Ayushmann Khurrana and Tahira Kashyap Khurrana to teach the millennial couples that a relationship is a two-way street which requires efforts from both partners? (Also Read: Samantha Akkineni Goes On A Dreamy Date With Hubby, Naga Chaitanya On Their Maldives Vacation)

It was in 2001 when Ayushmann Khurrana had confessed his love over a phone call to Tahira Kashyap and seven years later, the couple had tied the knot. Married for over 12 years now, Ayushmann and Tahira have seen highs and lows in their relationship but had sailed through it by becoming each other’s strength rather than weakness. Recalling their dating days with a throwback picture with Ayushmann, Tahira had written, “The days of red eyes, CD’s, collarbones, self stylised fringes (called flicks back then), never ending giggles and constant butterflies in the stomach! #college #theatre #collegelife @manisha.pande @ayushmannk.” The star wife-turned-author, Tahira Kashyap Khurrana tried something new and her hubby, Ayushmann Khurrana is crushing over his wife. For the first time ever, Tahira got a fringes hairstyle and flaunting the same, she posted two videos on her IG handle. Tahira captioned them as “Playing the sexy card here! (or perhaps it’s just in my head) And why not. Got fringes for the first time!” and “(till the time I start writing again).” Ayushmann and his brother, Aparshakti Khurana’s wife, Aakriti Ahuja are love-struck with Tahira’s look. While Ayushmann commented on her one video, “Crushing”, Aakriti wrote, “Fringes” and both added a love-struck emoticon in their comments. 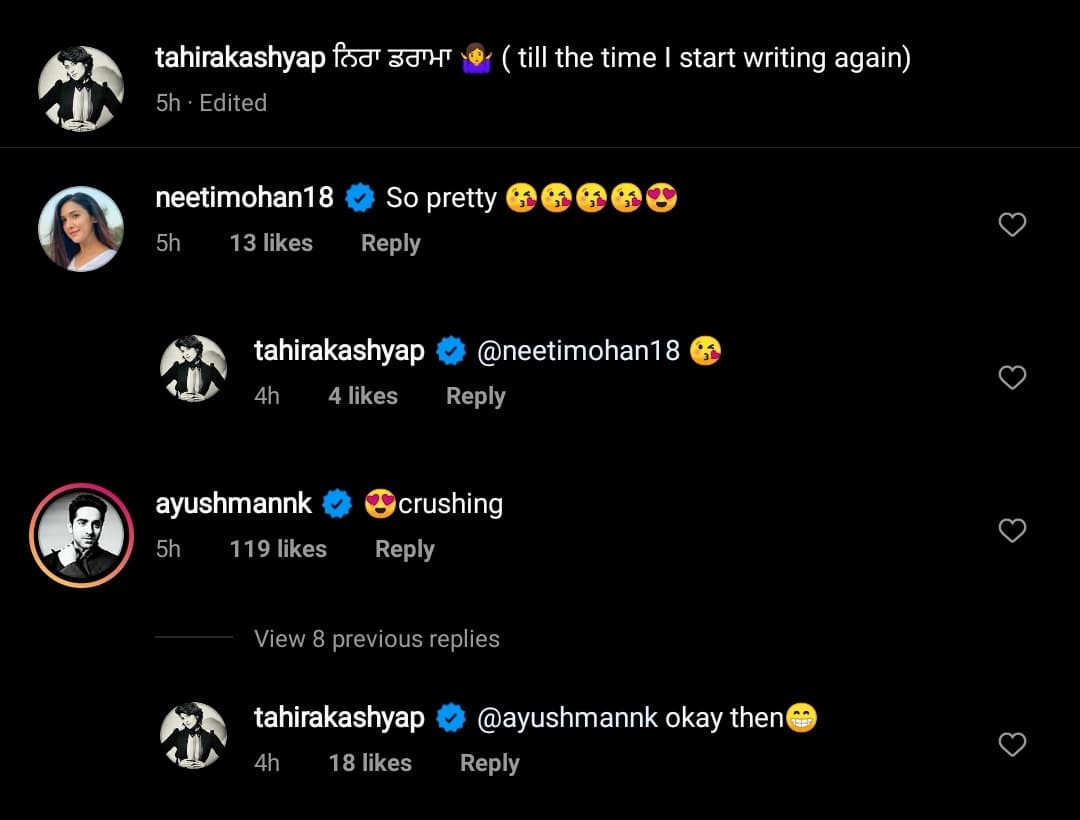 No matter how many years pass by in a relationship, one still remembers when it had all started. Right? And to keep the spark in your relationship alive, you don't have to look too far. Just go down the memory lane and cherish the beautiful memories every now and then, depicting why you have been together all these years. A few weeks ago, Tahira Kashyap had gone down the nostalgic road and had posted a picture with her then-boyfriend, Ayushmann Khurrana. Revealing how the young lovers had practised social distancing back then, Tahira had captioned the picture as “First year of dating and we were strong believers of social distancing!! #futuristic #throwbackthursdayontuesday #throwbackthursday #throwbacktuesday #samething #lockdown #kitnabadalgayainsaan.” (Also Read: Anushka Sharma Is A Sight To Behold As She Posts A Glimpse Of Pregnancy Diaries, Flaunting Baby Bump) Though Tahira Kashyap Khurrana feels proud to be recognised as Ayushmann Khurrana’s wife, she has created a name for herself too in the industry. Tahira had co-authored a book with Ayushmann, Cracking the Code: My Journey in Bollywood and had written and directed a short film, Toffee. Not only the readers and audience are all praises for Tahira, her sister-in-law, Aakriti Ahuja too, admires her bhabhi. Reposting a video on her IG story that was initially posted on a fan page, which is a TikTok video of Aakriti titled as ‘God while adding writing skills to Tahira mam’, the doting devrani had written, “Haha! It’s true @tahirakashyap.” 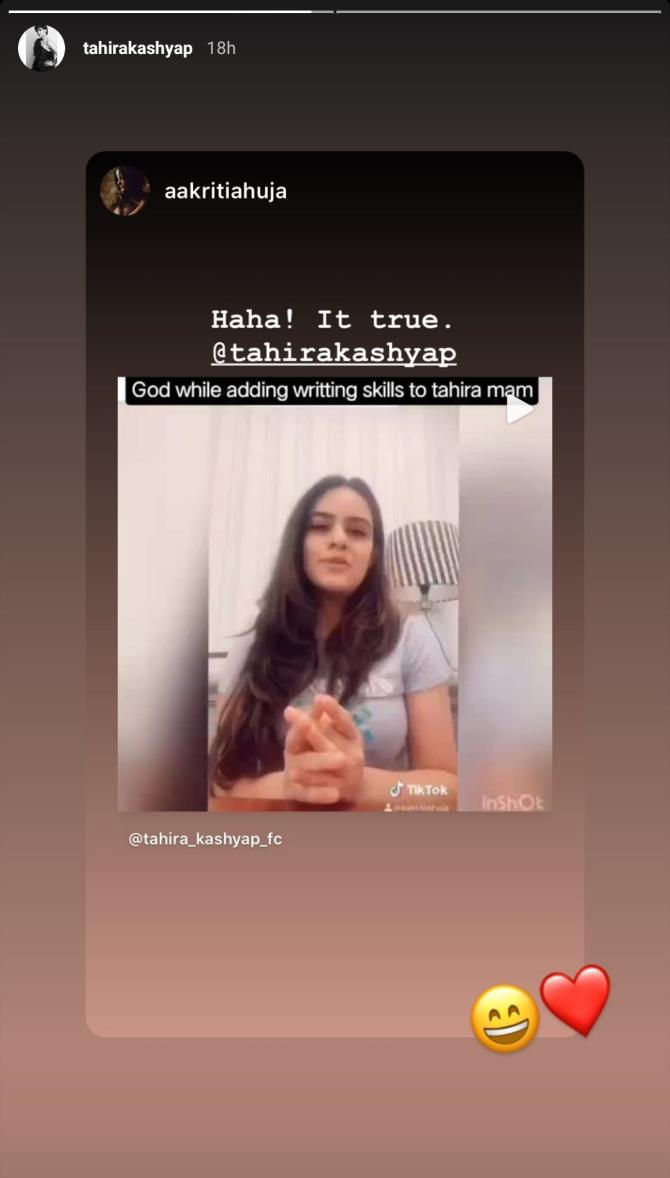 On Diwali 2020, the Khurrana clan including the seniors, Mr and Mrs Khurrana, their sons, Ayushmann Khurrana and Aparshakti Khurana, daughters-in-law, Tahira Kashyap Khurrana and Aakriti Ahuja and grandchildren, Virajveer Khurrana and Varushka Khurrana, had posed for perfect family portraits. The entire family’s ensembles were designed by Shantanu and Nikhil. Explaining Ayushmann and Virajveer’s outfits, the designer duo had written, “In lushes of Ivory & Gold, Ayushmann & Virajveer share a sweet father-son moment. Ayushmann looks suave in a classic Waistcoat-kurta silhouette while Virajveer adorns our signature #DrapeKurta with a handcrafted gold shawl.” For Tahira and Varushka, they had written, “Our adorable mother-daughter duo Tahira & Varushka, bring in the festive splendor in our classic Ivory #AnarkaliGown featuring a velvet bodice with metallic embroidery & our signature tulle draping.” And for Aakriti and Aparshakti, they had written, “Aparshakti & Aakriti, our charming #ShantanuNikhilCouple stuns in metallic minimalism. Aakriti graces a Silk #AnarkaliGown enlivened with gold thread work, while Aparshakti adorns a classic Waistcoat-kurta silhouette emblazoned with tone-on-tone texturing.” (Also Read: Ankita Lokhande And Her Beau, Vicky Jain's Dance Video In Their 'Night Dresses' Is Pure Couple Goals) 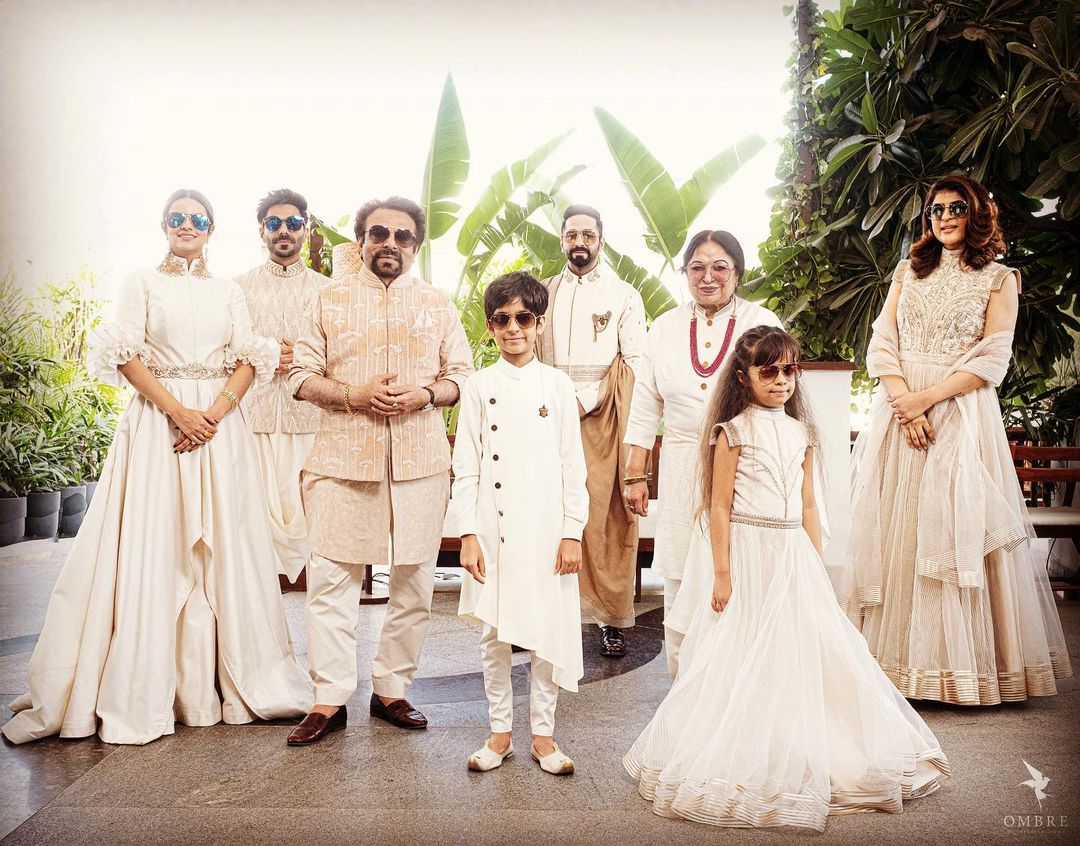 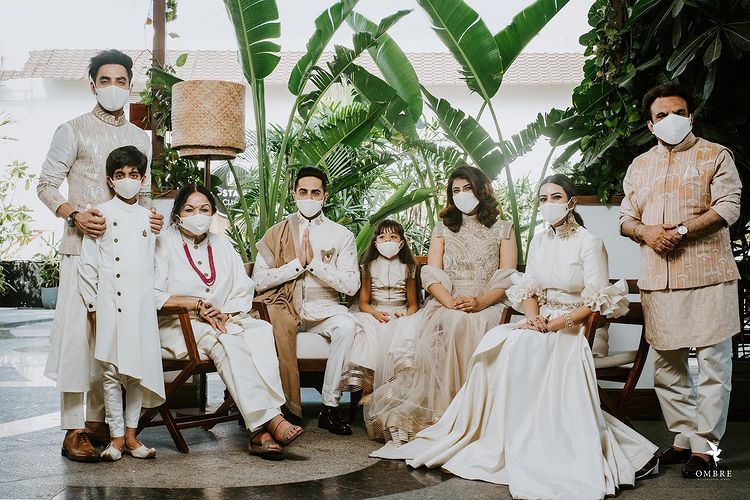 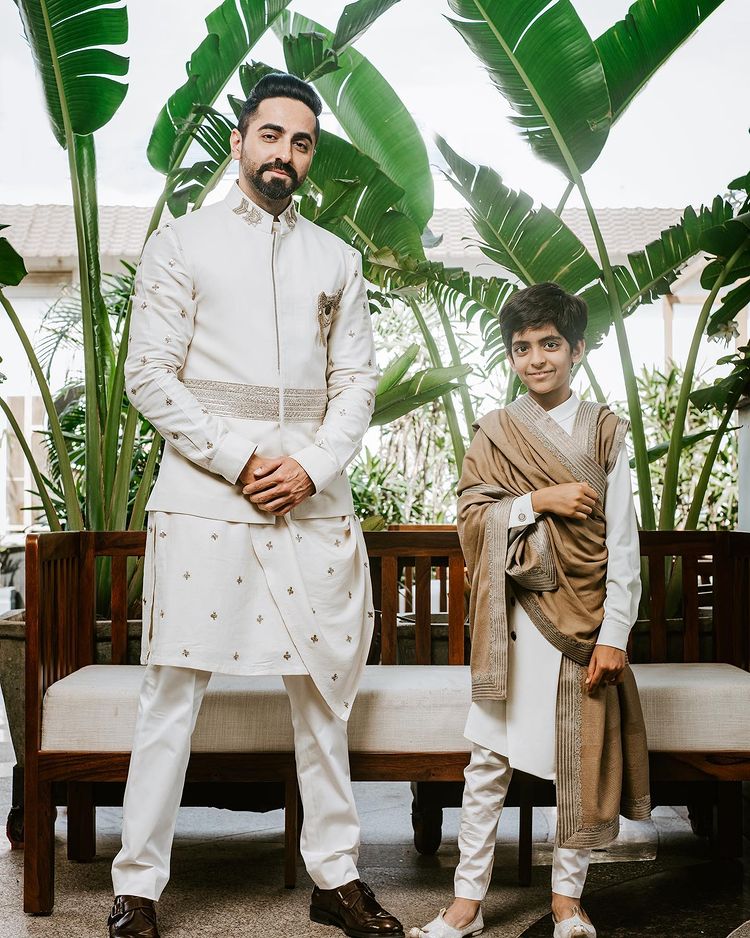 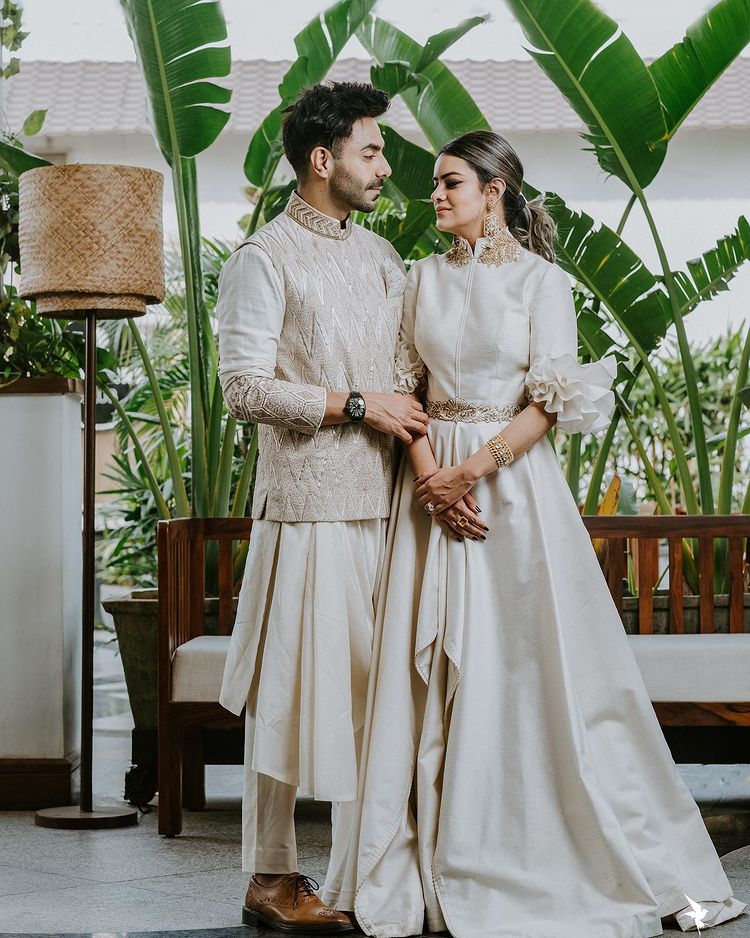 Did you like Tahira’s new look? Let us know!