Bollywood actor, Ayushmann Khurrana wished his father-in-law, Yajan Kashyap on his birthday with a cute wish and it'll melt your hearts in seconds. Take a look!

The man of the moment, Ayushmann Khurrana had made his TV debut in the year 2004, with the famous show, MTV Roadies and had made a name for himself in the hearts of young people. After doing work in radio as a radio jockey and as a VJ on the small screen, he had made his acting debut in 2012 with Shoojit Sircar's romantic comedy Vicky Donor, which was a super hit. In terms of his personal life, the actor is married to his childhood girlfriend, Tahira Kashyap and it has been 11 years since the two had exchanged their wedding vows. (Recommended Read: 'Coolie No 1' Actress, Sara Ali Khan Reveals Director David Dhawan Was Angry At His Son Varun Dhawan)

However, Ayushmann Khurrana isn't just an incredible actor, doting son, faithful lover, but also a caring son-in-law and a glimpse of the same he has shared on his Instagram handle. Scroll down to see it! On November 30, 2020, Ayushmann Khurrana took to his Instagram story and shared a picture of his father-in-law, Yajan Kashyap to wish him on his birthday. The doting son-in-law penned a warm wish atop it that reads, "Happy birthday to the most handsome and young at heart person. My father in law" followed by a cake and white heart emoticon. There's no argument in Ayushmann's compliment as the veteran looked nothing less than a dapper dude in his sky blue half-sleeves shirt and denim. But it's his black shades that compliment his well-maintained moustache and beard perfectly. Take a look: (Don't Miss: Kunal Kemmu In Love With A Beauty Other Than His Wife, Shahid Kapoor Calls Them, Rab Ne Bana Di Jodi) 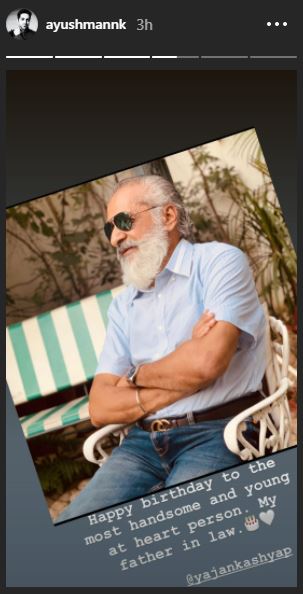 Ayushmann Khurrana's wife and renowned writer, Tahira Kashyap also shared the same picture on her Instagram handle along with a heartfelt letter in the caption that speaks volumes about her beautiful bond with her dearest daddy. The author started her note with a compliment, as she called him a simple man. She wrote, "My handsome birthday boy! His favourite filter is the sun, and favourite soap is liril, favourite shampoo is liril soap, favourite conditioner (that's just a conditioning for mind) , favourite cream-none, sunscreen-none. A simple, intelligent man who gets ready every day at 9am no matter what." Going further in her note, Tahira Kashyap also revealed that her father loves his lawn a lot as he's a big greenery lover. She added, "He loves his lawn. He tends to it. Flowers and greenery give him happiness. He lives by the principle of kindness. His tone has never differed according to a different audience. He indulges an electrician equally as he would an IAS officer. He has taught me values like humanity, integrity, strong character, and above all, to pray for happiness. Now you know my father a bit better." Concluding her note, Tahira called her father 'the best'. She concluded, "His virtues make him handsome, his deeds make him adorable.... no amount of creams and sunscreens can bring that inner glow! Happy birthday, papa. You are the best #birthdayboy #papa." (Also Read: Aditya Narayan And Shweta Agarwal's Wedding Card Gives A Glimpse Of Their Beautiful Wedding Location)