Friendship doesn't end with one of the BFFs getting married, Avika Gor and Manish Raisinghan are a living example of this as Avika has sweet birthday wishes for Manish. Check out!

Remember ‘Kuch Kuch Hota Hai’, that movie straight out set friendship goals for most of the 90s kids, before we had access to some rich shows like F.R.I.E.N.D.S. The movie had given us some flawed concepts of friendship, however, we still wish to have a Rahul to our Anjali in our life. Avika Gor and Manish Raisinghan’s friendship gave us major Rahul and Anjali vibes with their constant nok-jhok and yet being each other’s support system. (Also Read: Suhana Khan's Beautiful Clicks 'Stun' Bestie, Ananya Panday, Her Fashion Statement Is On-Point)

Avika Gor and Manish Raisinghan are also one TV couple, who were rumoured to be dating owing to their chemistry in Sasural Simar Ka. The two had always denied the rumours of their dating, but it was hard for people to accept it. However, now the rumours of their dating have been put to rest now as Manish Raisinghan had tied the knot with Sangieta Chauhaan on June 30, 2020. But, friendship doesn’t end with one of them tying the knot and Avika and Manish are a living proof of the same.

Avika Gor Is Excited As Her BFF, Manish Raisinghan Is Getting Married On Her Birthday With His Love Manish Raisinghan has turned a year older, and his best friend forever, Avika Gor has some special birthday wishes for him. Taking to her IG stories, Avika shared a series of pictures with her favourite human, Manish and along with pictures, she added songs highlighting their thick bond. The actress first shared a goofy picture with Manish with a birthday song, then she shared a picture from one of the Holi parties they had attended and she added the song, “Kuch Toh Hai Tujhse Raabta”. The third picture is from the vacations they had and to this picture, she added the song, “Tera Yaar Hoon Main”. She then, shared a picture from one of their shoots and added the song, “You Can Count On Me”. And she ended with a fan art and added the popular show, F.R.I.E.N.D.S. title song, “I’ll Be There For You”. Isn’t this an innovative way to express yourself! Check out the screenshots of the stories shared by Avika Gor. 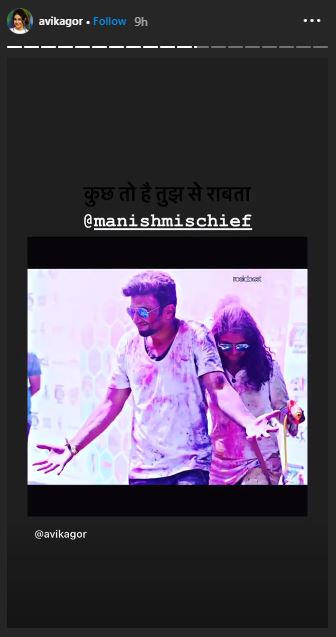 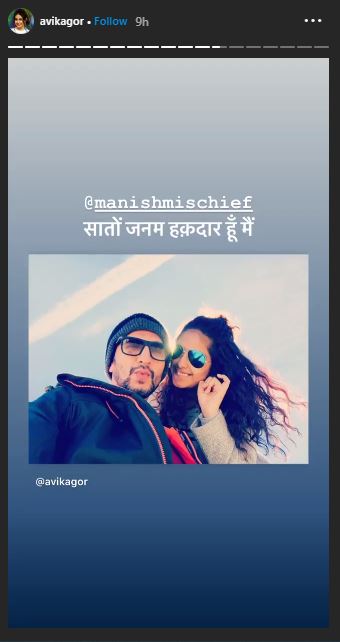 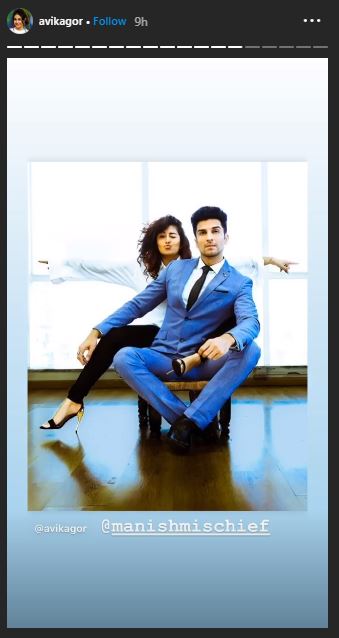 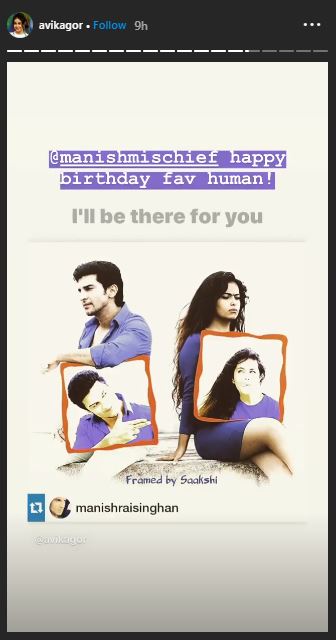 Avika and Manish’s friendship is so strong that Manish had chosen Avika’s birth date as his wedding day. Avika was delighted with the fact and the news of her BFF getting married. She had taken to her Twitter handle to congratulate her BFF Manish and had shared her excitement about the same. She had tweeted, “Badhai ho!!!! Shadi ki goodnews toh sabko mil hi chuki hai!!! My bestie is getting married on my birthday! Dher sari baatein karni hai kal raat 9:30 baje (26th June). Aap bahut zayada special ho @manishmischief”.

In an interview with SpotboyE, Manish had talked about his wedding date coinciding with his BFF, Avika’s birthday. He had stated, "Coincidentally, on both these days it's my best friends' birthdays. On June 15 it's Jassi's birthday whereas Avika's is on 30. Both told me to get married on their respective birthdays. Obviously, June 15 was way too close, so we couldn't, which left us with June 30, Avika's birthday. Now, she has promised whenever she gets married she will marry on my birthday." (Don't Miss: Taimur Ali Khan And Inaaya Naumi Kemmu Get Papped Wearing Masks As They Step Out In The City) In 2017, during a media interaction, Avika had talked about her relationship with BFF, Manish, She had said, “Manish is just a few years younger than my father, so there is no scope for any romantic involvement. We share a unique bond of friendship, which is inexplicable. It is based on understanding, respect, honesty and maturity. We are BFFs and he is a strong support system. I call him Shin Chan (the popular comic character) and he calls me Mitzi (Shin Chan's mother) till date." (Recommended Read: Raveena Tandon Shares An Unseen Childhood Picture From Her Birthday Party, Pens A Nostalgic Note) Avika Gor Is Excited As Her BFF, Manish Raisinghan Is Getting Married On Her Birthday With His Love