Namaste England fame actor, Arjun Kapoor and his lovely sister Anshula Kapoor make one of the best bhai-bhen ki jodi from the tinsel town. The love that they have for each other, the strong bond that they share is all very much evident in their pictures, during media interactions, and when they stand for each other against all odds. The relationship between Arjun and Anshula is all about friendship, love and warmth. Not just good brother and sister to each other, but the two now share an amazing bond with their half-siblings, Jahnvi Kapoor and Khushi Kapoor.

Today, on December 29, 2018, it is Anshula’s 26th birthday and doting brother took to his official Instagram handle to wish her. Arjun shared two beautiful pictures, one family picture comprising of Boney Kapoor, the birthday girl Anshula Kapoor, Jahnvi Kapoor and Khushi Kapoor, and the other one of the ‘sibling gang’. The India's Most Wanted star has captioned the post as, “Happy birthday Ansh... ur an extension of me, the best part of me & u always shall be the world to me... #happybirthdayanshula #bestsisterever #growinguptoofast”. (You May Also Like: Hina Khan Is Beau Rocky Jaiswal's 'North Star', He Writes A Beautiful Poem For Her) 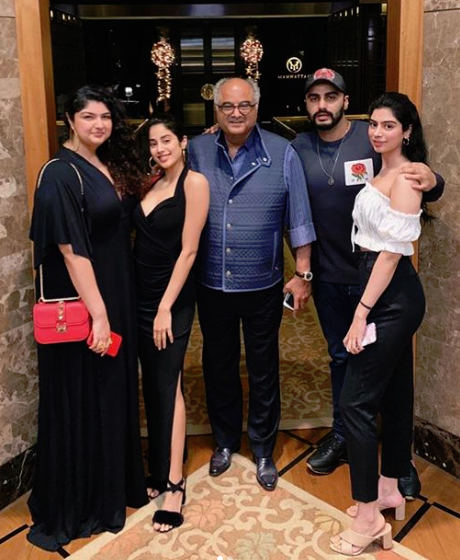 Arjun is very close to his sister Anshula and there is no doubt about that. Every now and then, he is there for her as a pillar of strength. In fact, some time back he shared a throwback picture with his mum, Mona Kapoor and sister Anshula, along with it he penned down an emotional note for his followers. The note could be read as, “Guys today is Throwback Thursday. Today I genuinely felt so conflicted as I woke up wondering if all the madness the chaos is all worth it if your loved ones aren’t ok and aren’t a 100 percent. The world ceased to exist for me when my sister wasn’t well for the last few days. I missed my mother even more because I felt vulnerable n helpless sitting in Pokhara trying to be professional because that’s what an actor is supposed to be in that moment.” (Checkout: Taimur Ali Khan Skiing In London With Kareena And Saif Will Make Your Weekend Even More Amazing)

And on this post, his lovely sissy Anshula’s witty comment could be read as, “I love youuuuuu even when you post the most horrible photos of me bhai”! Arjun loves Anshula like anything so much so that he rushed back to town, leaving his film Most Wanted’s shooting when he heard Anshula’s is unwell. Topping it all was the fact that he promised to do double shifts to make up for his emergency leaves. A source shared with Mumbai Mirror, “The production team stepped up to help Arjun when he approached Raj Kumar sir for a break from the shooting. Arjun made sure to wrap up the Nepal schedule a day early and flew back to Mumbai quietly. He has been with Anshula ever since." (Also Read: Unseen Pictures From Priyanka Chopra And Nick Jonas' Wedding, Isha Ambani Turned Bridesmaid) Later, the Ishqzaade actor had stated, “Anshula is better now and just needs some more rest. She tried her best to convince me that she was okay so that I could finish work. But honestly, I’d rather see her recover in person.” 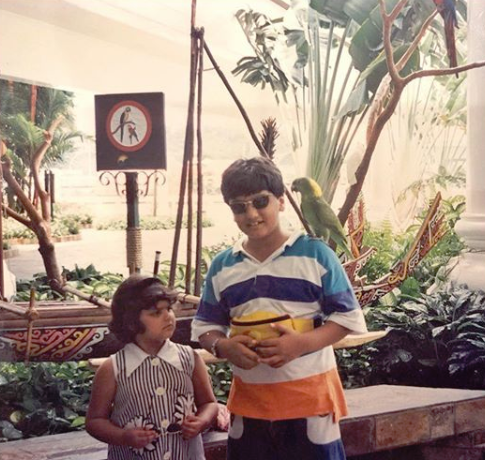 Also, recently, Arjun Kapoor and Janhvi Kapoor appeared on a famous celeb chat show, Koffee With Karan. During one of the segments Janhvi had called Anshula and asked her to say “Hello, Karan, it’s me”. Due to network issues, she couldn’t hear her properly and soon trollers started attacking her for not helping Janhvi win the contest. 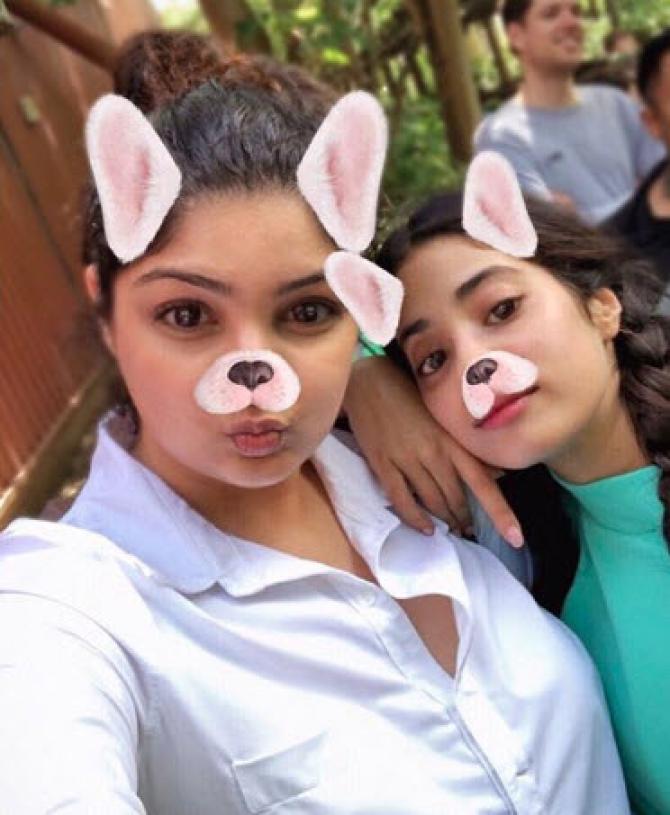 Janhvi shared that Anshula had even received rape threats for not helping her! She revealed, “My sister actually just recently got trolled on social media. She did something silly on Koffee with Karan and started getting like rape threats and stuff. And it was just weird to me. As people are faceless on social media, they feel they can have opinions that sometimes cross a moral line. So when I put stuff that’s personal up on social media, I do think of that too. I feel protective towards them, what people might say about them or about my equation with them. You tend to be guarded.” (Must Check: Shah Rukh Khan And Salman Khan Jam Together On Bhai's 53rd Birthday, Video Inside) 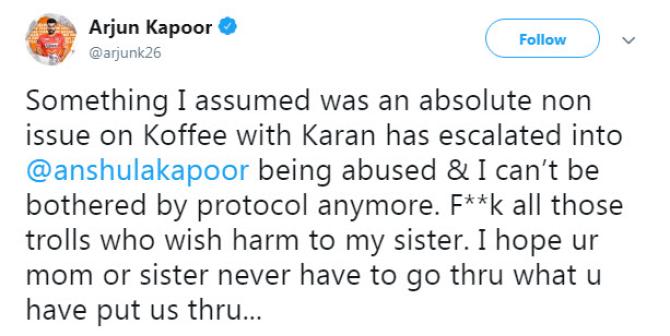 To this big brother, Arjun Kapoor stood against the trolls and trollers and took to his official Twitter account to shun them all. An angry Arjun’s tweet can be read as, “Something I assumed was an absolute non-issue on Koffee with Karan has escalated into @anshulakapoor being abused & I can’t be bothered by protocol anymore. F**k all those trolls who wish harm to my sister. I hope your mom or sister never have to go thru what you have put us through.”