Happily married now, we all know that Anushka Sharma and Virat Kohli's love scene had started from the sets of an ad, but it wasn't all dreamy and picture-perfect from the very first sight.

If there is any couple in the world who can challenge the world #CoupleGoals, it is none other than Virat Kohli and Anushka Sharma! We mean, don’t you think ‘complementing each other’ is an understatement when it comes to them? Every public appearance that they make, their travel diaries, adorable gestures for their fans and their struggle to spend as much time with each other amidst their busy schedules, is what makes us think that ‘jodi ho toh aisi!’ And it’s time to say that all over again for Virat has, for the umpteenth time, proved his chivalry towards his wife, Anushka! (Do Read: Ishaan Khatter And Janhvi Kapoor Attend Zain Kapoor's Private Birthday Bash Hosted By Shahid-Mira)

It was an ordinary evening on December 11, 2018, when we all were wrapping up our work for the year and the like when two pictures from Anushka Sharma and Virat Kohli’s Instagram profiles had dropped like a bomb on the netizens. Blending in the hues of Italy, Anushka and Virat had looked a million dollars as they became each other's for eternity! The pictures were captioned as “Today we have promised each other to be bound in love forever. We are truly blessed to share the news with you. This beautiful day will be made more special with the love and support of our family of fans & well-wishers. Thank you for being such an important part of our journey.” Happily married now, we all know that Anushka Sharma and Virat Kohli’s love scene had started from the sets of an ad, but it wasn’t all dreamy and picture-perfect from the very first sight. In an interaction with the celebrated American television sports reporter, Graham Bensinger, the captain of the Indian cricket team, revealed it all about their ‘awkward’ first meeting, the cloud of nervousness that was prevalent and a joke that he cracked, which didn’t go down well with Anushka! He said, “She is tall and she was wearing heels (makes a gesture which isn’t too much) and she was being told that I am not that tall, I am not 6 feet plus or something… she walked in with heels and was looking taller than me and I was like didn’t you get a higher pair of heels. Then she was like ‘excuse me’ and then I was like ‘no, I am just joking’.” Virat Kohli also added that he and his now-wife, Anushka Sharma belong to similar backgrounds and it was the year 2013, that they had first met. Virat also opened up about their first few dates and the transition from co-workers/acquaintances to lovers. He revealed, “I don’t even remember when we thought ‘okay this is the time when the transition is happening’, it was so organic and natural. And it kept getting stronger and stronger. We knew that we just wanted to be with each other.” Isn’t it amazing?  (Must Read: Virat Kohli Finally Reveals Why Wedding With Anushka Was Kept So Confidential, It's A Valid Reason) 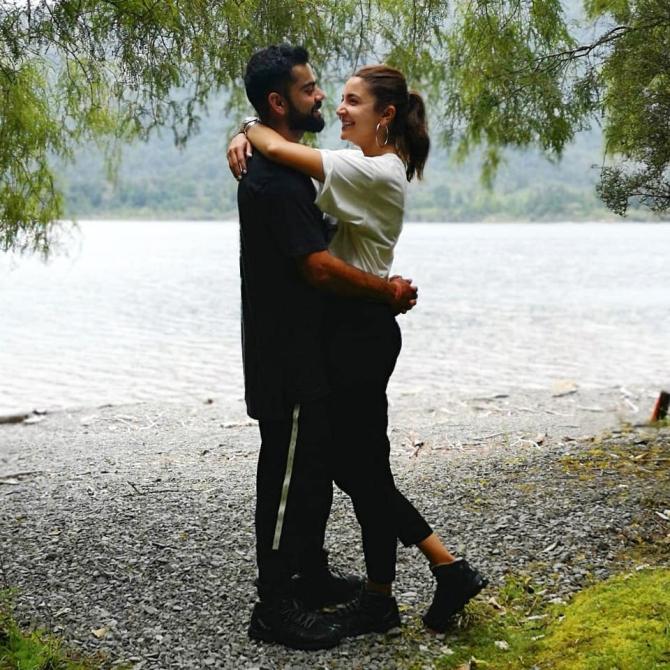 Anushka Sharma too leaves no opportunities to talk about their dreamy wedding. She was the Vogue cover girl for March 2019 and in the same, Bollywood’s Pari had revealed the extent the couple had gone to keep their wedding a secret, which included keeping fake names for preparations. Revealing the details, Anushka had shared, “We even used fake names while talking to the caterer; I think Virat’s was Rahul.” She had further added, “We wanted to have a home-style wedding. There were only 42 people there, with all our friends and family present. I wanted it to be about Virat and me marrying each other, and not this big celebrity wedding. The energy at our wedding was blessed.” Anushka Sharma and Virat Kohli have been married for over one-and-a-half-years now, and we still can’t get over the beauty and love that their wedding pictures had come laced with. Anushka had gotten married at the age of 29, considered very early for actresses to get married. In an interview with the Filmfare, the doting wife had revealed why she did so. She had stated, “Our audience is way more evolved than our industry is. Audiences are just interested in seeing actors on screen. They don’t care about your personal lives, whether you’re married or whether you’re a mother. We need to get out of this headspace. I got married at 29, supposedly young for an actress. But I did it because I was in love. (Smiles) And I am in love. Marriage was a natural progression.” (Also Read: Alia Bhatt And Ranbir Kapoor Share Some Quality Time Together As They Go On A Jungle Safari) Indian cricketer, Virat Kohli and his wife, Anushka Sharma never fail to give us relationship goals. From their hush-hush affair to tying the knot in an intimate wedding, the couple proved that they value their relationship and wants to stay away from the media limelight. In many media interviews, Virat has often said that Anushka