On Friday night (April 27, 2019), Anushka Sharma and Virat Kohli were spotted at the latter's self-owned restaurant in Delhi, Nueva, along with the members of his IPL team, RCB.

Marriages are made in heaven and so are couples! Do you know that the person with whom you are going to spend a lifetime, is already pre-decided by the moon fairy, during your birth? Yes, you might meet a zillion people in this planet, connect with them, invest your precious time with them, but sometimes things don’t work out even when you give your 100% in a relationship. And when it doesn’t, always remember that the moon fairy has reserved somebody better for you! And we talk about a few celebrity couples whom we think are ‘made in heaven’, Anushka Sharma and Virat Kohli’s love life gets a must mention! (Do Read: Chhavi Mittal's Hubby Mohit Shares Secret Behind 14-Year Long Journey Of Togetherness On Anniversary)

It was on the night of December 11, 2017, when Anushka Sharma and Virat Kohli themselves shared the news of their marriage with their fans, by posting some amazing pictures from their dreamy Italy wedding. Do you remember, the beautiful message that this gorgeous couple had written to announce to the world that they are now all taken? The caption that they wrote could be read as, “Today we have promised each other to be bound in love forever. We are truly blessed to share the news with you. This beautiful day will be made more special with the love and support of our family of fans & well-wishers. Thank you for being such an important part of our journey."

Anushka Sharma Is Back To Work Within 3 Months Of Delivering Her Baby Girl, Vamika 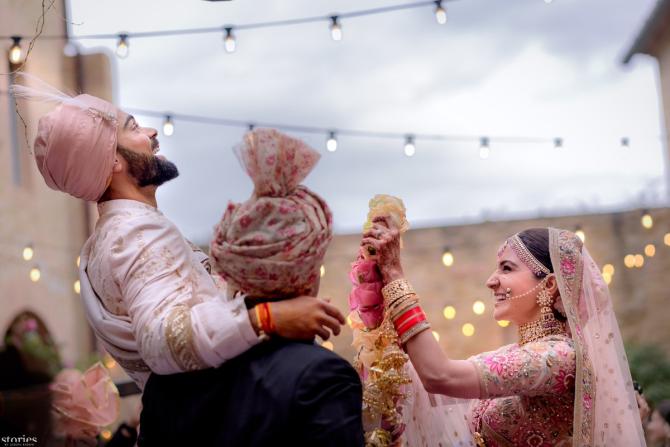 While their marriage and their wedding attire were sheer goals, their lives and their togetherness in themselves continue to serve as goals in themselves! While he supports his wife to the fullest, she ensures that his responsibility towards his country is well kept up with. And in the similar lines, it was on Friday night (April 27, 2019), when Anushka Sharma and Virat Kohli were spotted at the latter’s self-owned restaurant in Delhi, Nueva along with the members of his IPL team, Royal Challengers Bangalore at the plush lounge. Needless to say, Virat had looked dapper in a loose brown t-shirt with dark comfy pant and Anushka killed it once again in a floral-layered dress, which she complemented with mid-parted hair and hoop earrings.

Checkout all the videos and pictures from Anushka Sharma and Virat Kohli’s party night here: 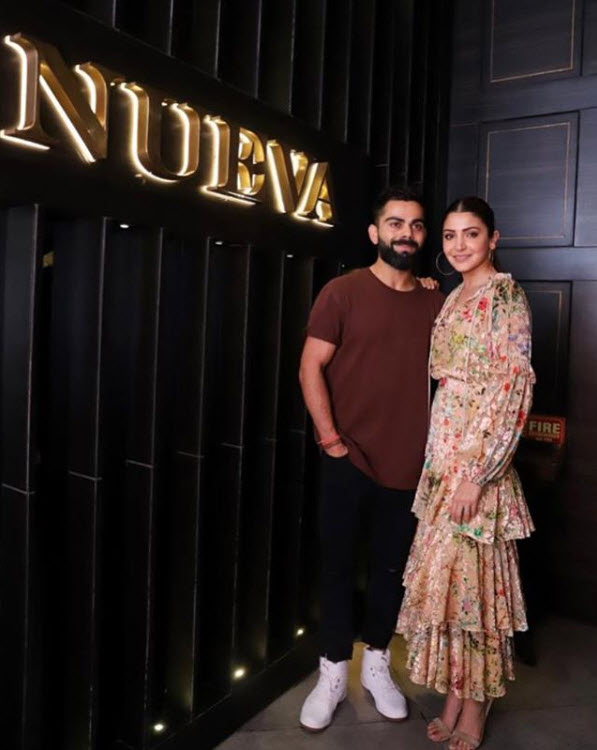 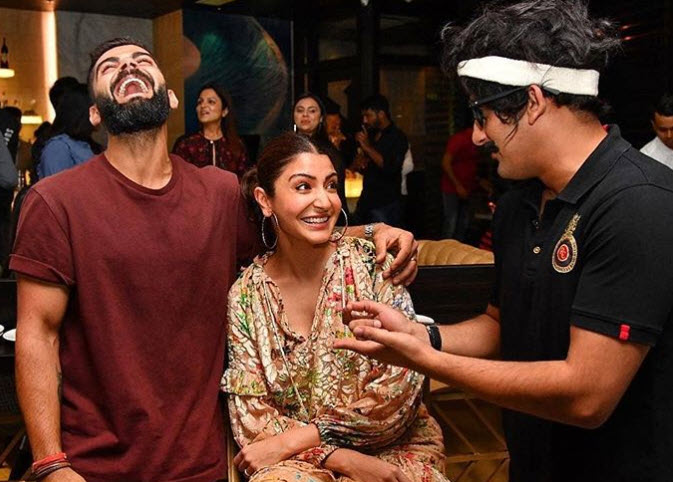 Amazing, right? Anushka Sharma was the Vogue cover girl for March 2019 and in the same, Bollywood’s Pari had revealed the extent the couple had gone to keep their wedding a secret, which included keeping fake names for preparations. Revealing the details, Anushka had stated, “We even used fake names while talking to the caterer; I think Virat’s was Rahul.” She further added, “We wanted to have a home-style wedding. There were only 42 people there, with all our friends and family present. I wanted it to be about Virat and me marrying each other, and not this big celebrity wedding. The energy at our wedding was blessed.” (Must Read: Neil Nitin Mukesh's Daughter, Nurvi Looks Like A Doll In Pink, He Shares A Perfect Family Picture) A few days back, Anushka Sharma’s pregnancy rumours created quite a hullabaloo in the media. But soon enough, the actress cleared it all in an interview with the Hindustan Times, “That (spreading rumours) is something people will do anyway. It’s completely unnecessary and silly as you ultimately can’t hide such a thing. You can hide a marriage but not pregnancy. I feel every female actor goes through it, so people marry you off even before you are hitched and make you a mother before you are pregnant. I don’t pay attention to it, and just laugh these things off since I find them hilarious. When I read about such stuff, I think, ‘where do such absurd things come from?’ Right now, I’m literally working round-the-clock.” 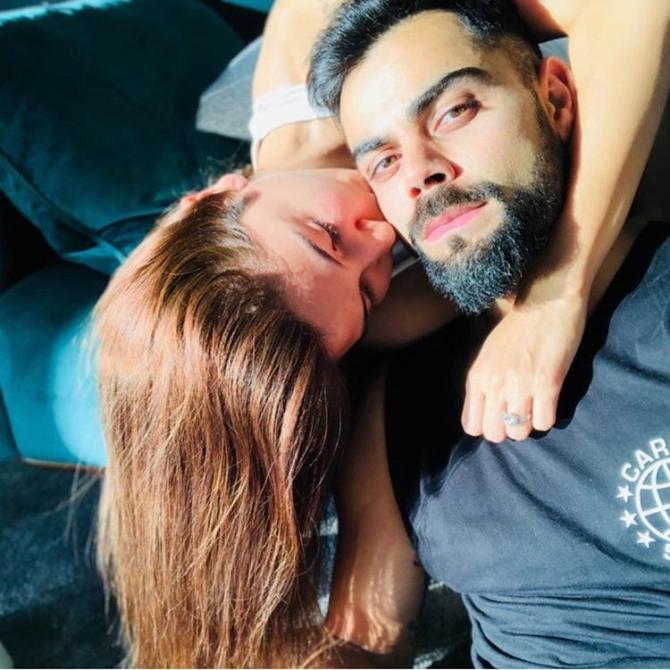 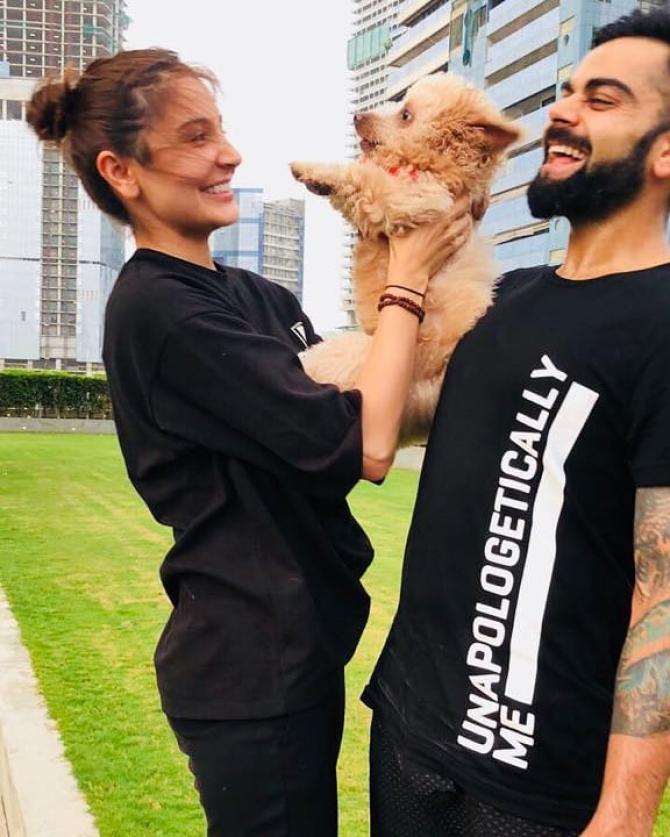 And we love you guys for that! Guys, how many ‘awwws’ do you pour in for Anushka Sharma and Virat Kohli, every time you see their picture? Keep us posted!