For the next schedule of 'Brahmastra', Alia Bhatt and Ranbir Kapoor along with the team had headed off to Manali, where the protagonists-cum-lovebirds received a warm welcome.

Brahmastra, being the first film of Ranbir Kapoor and Alia Bhatt together, has made the wait for its release even more difficult. It has been close to 2 years now since we have been drooling over the ‘really new’ relationship of Alia and Ranbir that we are waiting for the lovebirds to get married soon. From eagerly looking forward for the release of their first movie together to waiting for them to be pronounced husband and wife, Ranbir and Alia are the ‘IT’ couple of B-town, who are painting the town red with their love! (Also Read: Neha Kakkar Enjoys Her Friend's Birthday Bash With Rumored Boyfriend, Vibhor Parashar)

We have seen Alia Bhatt spending quality time with her probable soon-to-be in-laws, the Kapoors, even Ranbir Kapoor is loved by the Bhatts, which is quite evident in their interviews and media interactions. Just how excited we are to see Ranbir and Alia officially becoming each other’s forever, we are waiting to witness the magical on-screen chemistry between the two most talented actors of B-town. To our delight, Ayan Mukerji had treated the fans with a glimpse of the logo of the film in the grandest way at the Kumbh Mela 2019. Dharma Productions had captioned the picture of Alia, Ranbir and Ayan gazing at the logo of Brahmastra as “Another journey now begins, welcome to the world of #Brahmastra!”

Alia Bhatt Talks About Working With BF Ranbir Kapoor In Brahmastra, Says 'His Eyes Are So Honest' 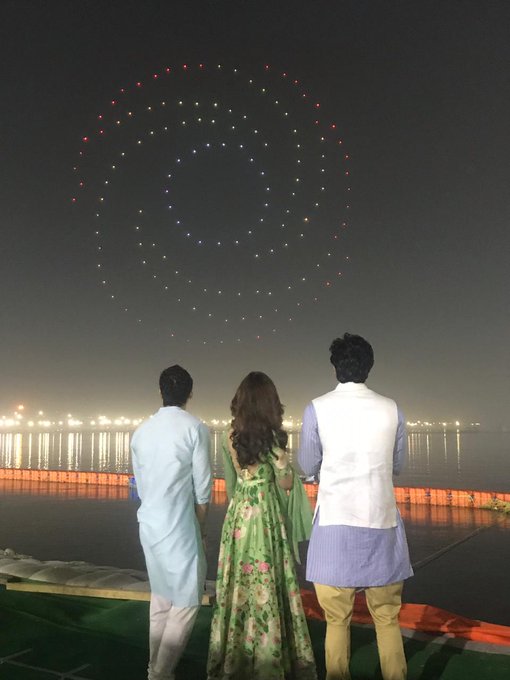 For the next schedule of Brahmastra, Alia Bhatt and Ranbir Kapoor along with the team had headed off to Manali, where the protagonists-cum-lovebirds received a warm welcome. Dressed in Himachali style with the traditional Manali cap and muffler, Alia and Ranbir posed with the locals as they held bouquets in their hands. While Alia donned a blue shirt with white pants, Ranbir had sported an all-black look with a sling supporting his injured shoulder, Ralia (as fondly called by their fans) were also captured at the airport as they headed off to Manali. 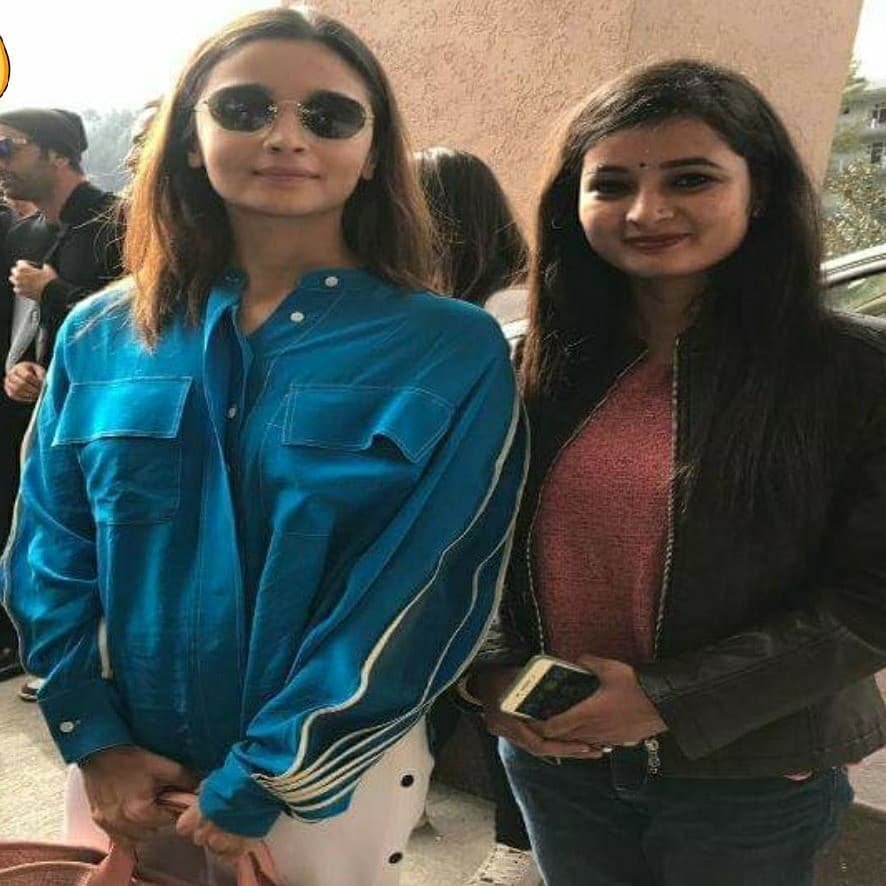 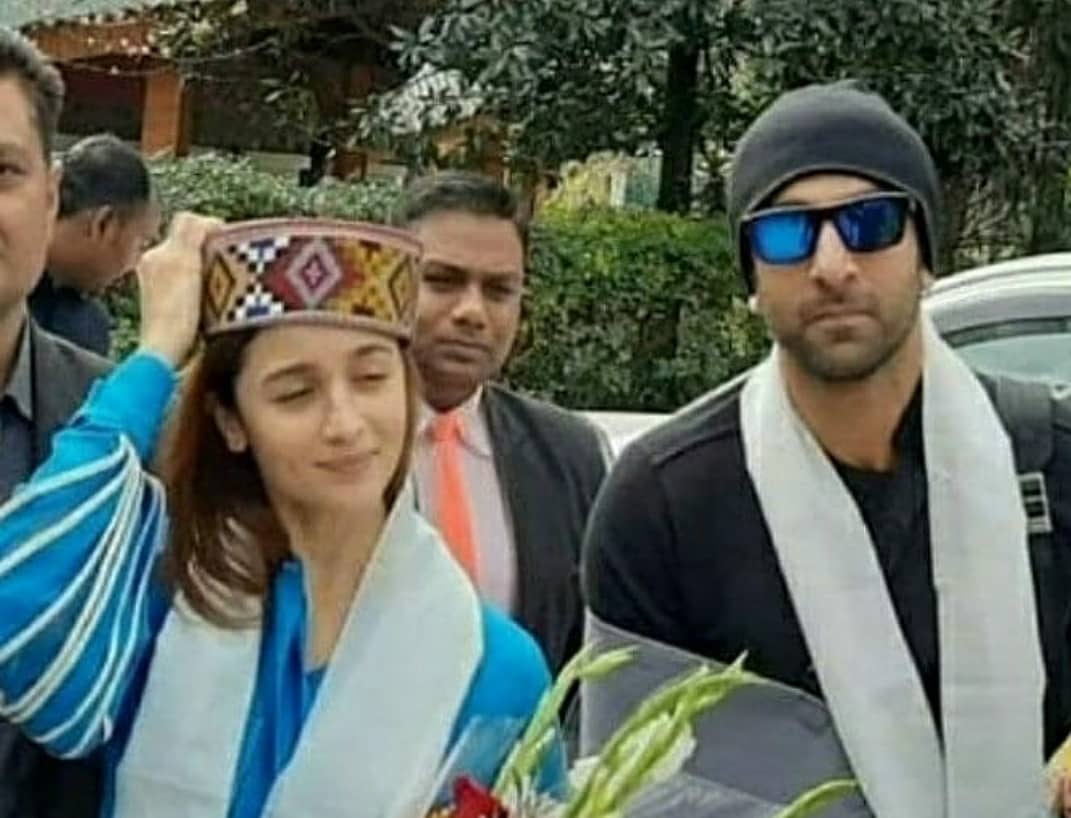 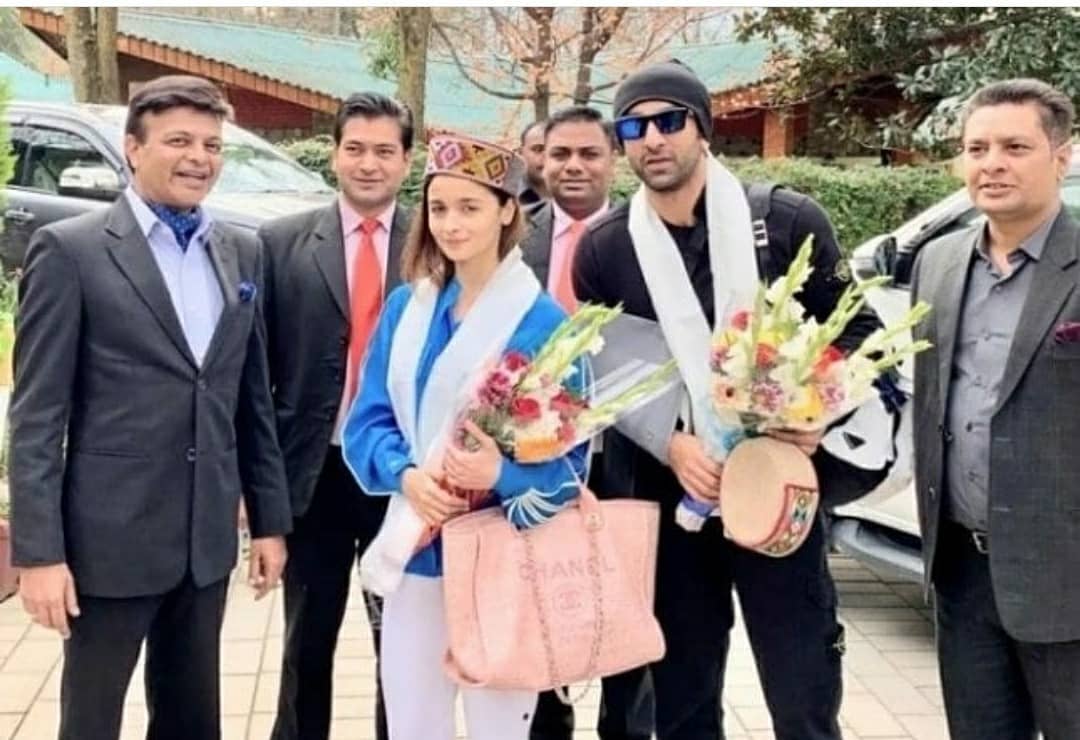 As per a Mumbai Mirror report, a source had revealed details about Ranbir Kapoor and Alia Bhatt’s Brahmastra Manali schedule. The source had stated, “Ranbir, Alia and the entire cast will fly to Manali in November for a 15-day shoot. Every location carries Shiva’s (RK’s character) story forward. Manali, too, plays an important role in the screenplay." The source had continued, "All the locations in India that feature in the story reference the central characters. During the Manali schedule, the story of Shiva’s origin and self-discovery will be traced." 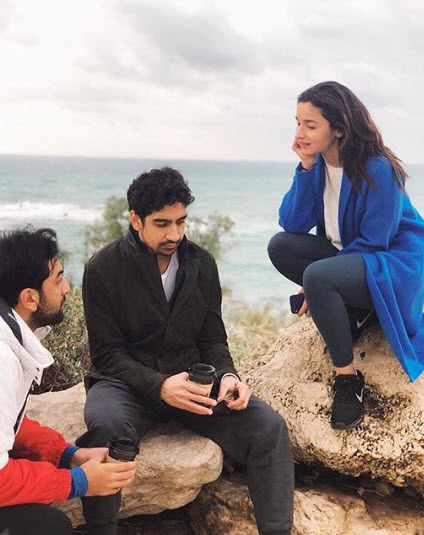 Before heading off to Manali for the shoot of Brahmastra, Ranbir Kapoor and Alia Bhatt came together to celebrate his cousin, Armaan Jain’s birthday. Alia already shares a great camaraderie with Ranbir’s parents, Neetu Kapoor and Rishi Kapoor, and her pictures from Armaan’s birthday bash proved that she had fit in just right with the entire Kapoor clan. In a group picture shared by Ranbir and Armaan’s cousin, Karisma Kapoor, we could see Alia not letting go of her beau, Ranbir’s arm as they posed for the picture. While Alia had looked prettiest in a blue dress, Ranbir had sported an all-denim look and the lovebirds had twinned in blue! (Also Read: Rumoured Couple, Vicky Kaushal And Katrina Kaif Are All Set To Ring New Year 2020 Together?) 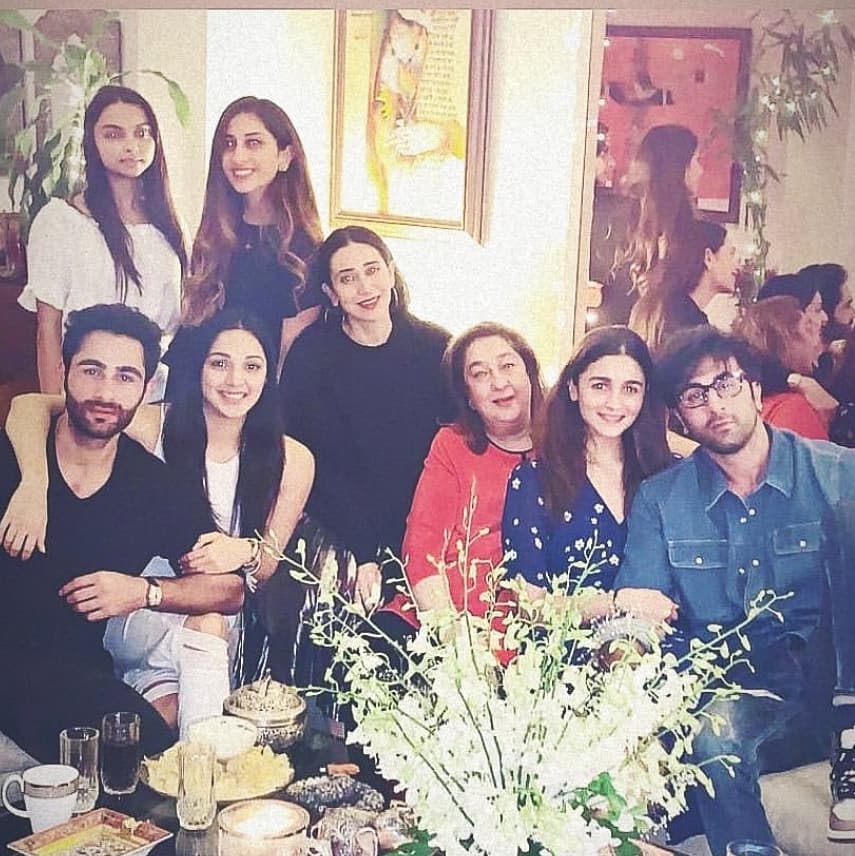 In a discussion on the 100 greatest performances of the decade with Film Companion, Ranbir Kapoor’s ex, Deepika Padukone and his current ladylove, Alia Bhatt came under one roof, where they were also joined by Manoj Bajpayee, Vijay Deverakonda, Ayushmann Khurrana, Ranveer Singh and amongst others. During the conversation, Vijay had revealed his crush on Deepika and Alia and said, “Without shame a lot of people on this table have been massive crushes, like been in love with some of them like these two (pointing to Deepika and Alia). She (Deepika) got married but...” Deepika interrupted him and said, “She (Alia) is getting married.” Vijay continued, “She (Alia) is getting married.” Alia immediately halted the conversation and said, “Excuse me, why have you made this declaration?” Deepika, perhaps realising that she’d said too much, then clarified, “Guys, I made that up. I just wanted to see his reaction.” 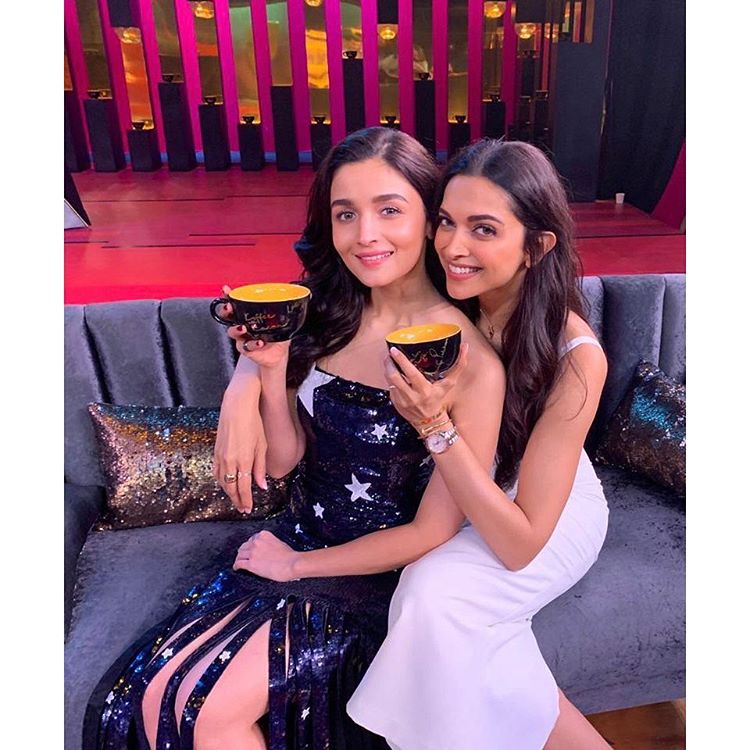 In an interview with Mid-Day, Alia Bhatt had revealed that she has immense faith in Ayan’s vision and Brahmastra could be a film that will make the industry proud. Alia had said, “Ranbir and I have always maintained that Brahmastra is not a superhero film; it is a mystical fantasy drama. There is no reference [for comparison]. It’s a new film that is emerging from our industry. It could be a film that will make this industry proud and put us on a global pedestal. I don’t want to blow my own trumpet, but there’s immense faith in Ayan’s vision.” Speaking about Ranbir, Alia had continued, “I have always been a great admirer of his craft. He is an honest actor who extracts the best from himself when in front of the camera. There are no trappings, and even if he has a process, it is an internal one, [which finally translates] on camera.” (Also Read: Mohena Kumari Shares A Royal Picture With Hubby, Suyesh Rawat As They Attend A Wedding Together) 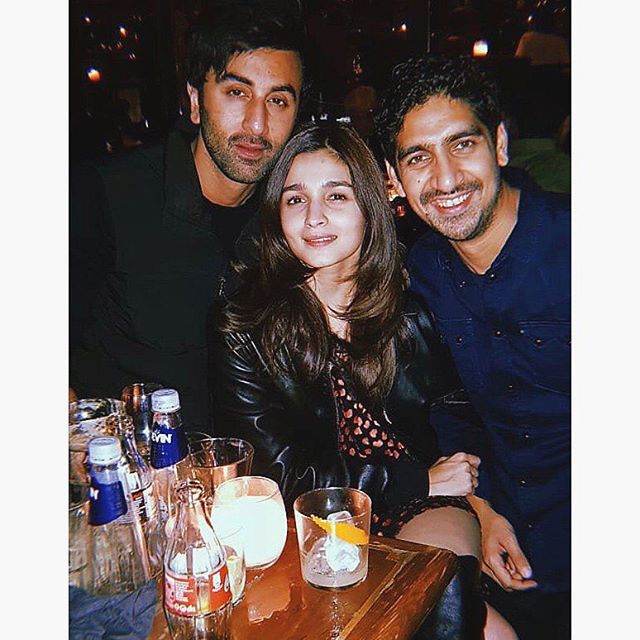 If reports are to be believed, Dharma Productions have also roped in Shah Rukh Khan for a cameo in Brahmastra. Are you excited for the film’s release? Keep us posted! 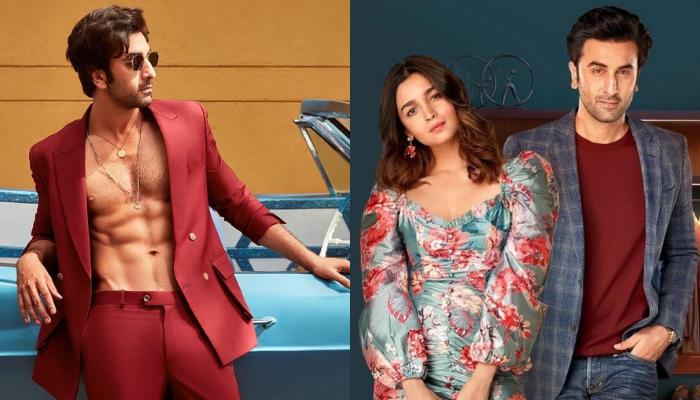 Brahmastra co-stars, Ranbir Kapoor and Alia Bhatt, had taken the internet by storm by dropping beautiful pictures of their hush-hush white wedding on April 14, 2022. After two months of marriage, the couple gave another pleasant surprise to their loved ones by announcing their pregnancy on June 27, 2022. Moreover,