Shah Rukh Khan is a doting father to his children, Aryan, Suhana and AbRam Khan. On March 2, 2020, the proud father shared a picture of a drawing made by his son, AbRam.

One of the best moments for a father is to see his son excel in whatever he does. The sacrifices made by a father for his kids is beyond every measure. When a mother imbibes good values in her kids, it is the father, who motivates him/her to be a better person. And one of the proudest moments for a father is to see his son quoting him as an inspiration. A father is the backbone of a family and plays a huge role in moulding the lives of his kids. The Badshah of Bollywood, Shah Rukh Khan dotes on his children, Aryan Khan, Suhana Khan and AbRam Khan. (Also Read: Mohena Kumari Singh Shares A Beautiful Picture With Her Husband, Suyesh Rawat From Dehradun)

Shah Rukh shares an amazing bond with his little ones, from standing like a pillar of strength to motivating them throughout, he has always been an inspiration to all the fathers. Often tagged as the king of romance, Shah Rukh Khan has always blown our minds with his spectacular performances on-screen but his role as a father off-screen is commendable. Despite his busy shooting schedules, the doting daddy always takes out time to spend with his family. In the year 2014, Shah Rukh shared the first-ever picture of his little munchkin, Ab Ram and the super cute picture of the father-son duo had melted our hearts. 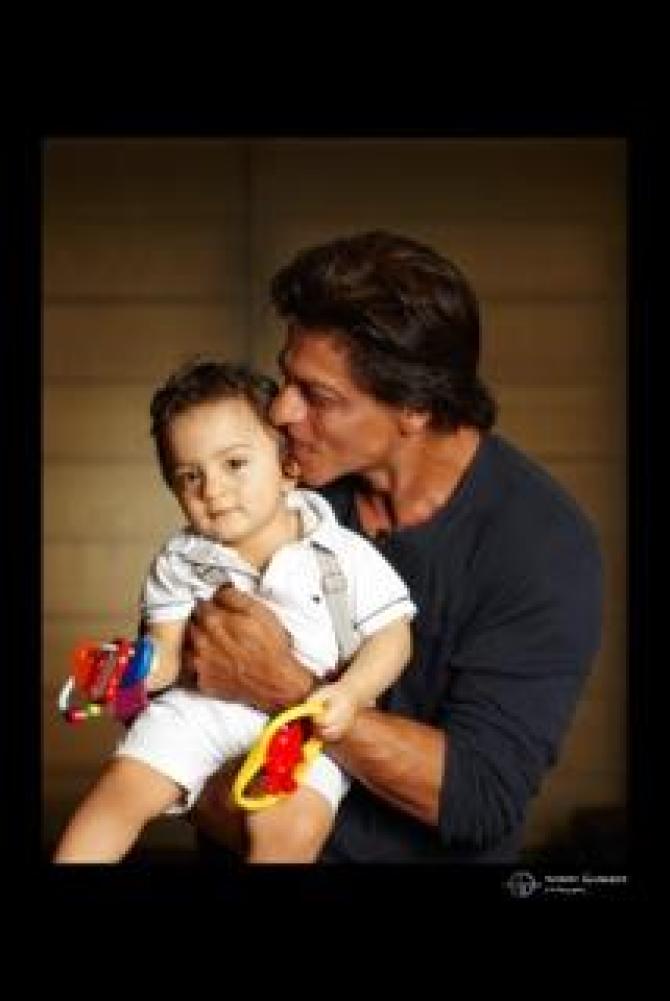 Shah Rukh has always shared his proud moments with his fans and March 2, 2020, was no different. The Om Shanti Om actor took to his Instagram handle and shared an adorable drawing of his son. AbRam had drawn two figures, one was tagged as ‘AbRam’ and the other one as ‘Papa’ with a couple of hearts around them. Along with the picture, the proud father, Shah Rukh wrote a heart-melting caption which can be read as “Being a father (3x) has been, my greatest source of pride, humility, inspiration & even achievement. It has taught me to choose innocent honesty over smarts....in every aspect of life. My little one told me I look better than him in his drawing cos I am smiling without a reason.” 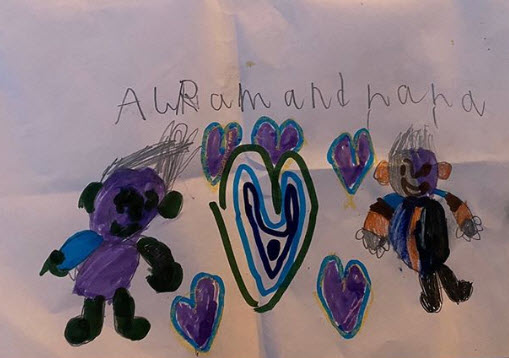 This is not the first time Shah Rukh was sharing his proud-father moment. On January 17, 2020, Shah Rukh had taken to his Instagram handle and had shared a picture of his son AbRam carrying a certificate and medal he had won in a race at his school. Along with the picture, Shah Rukh had written, “Day at the Races...My little ‘Gold Medal’ with his Silver and Bronze wins at the races today!!” His wife, Gauri had also shared pictures of her son and had captioned it with a heart emoticon. (Also Read: Taimur Ali Khan Is Having A Busy Sunday As He Gets Ready For Gardening, Videos Inside) 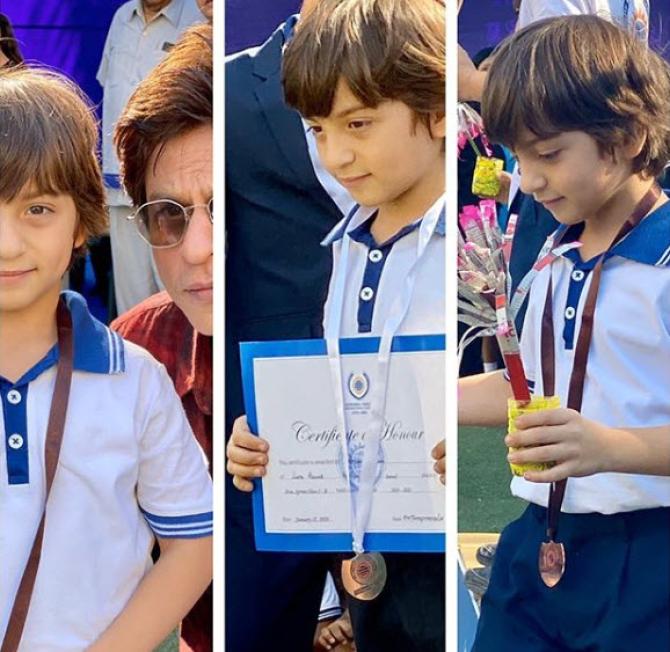 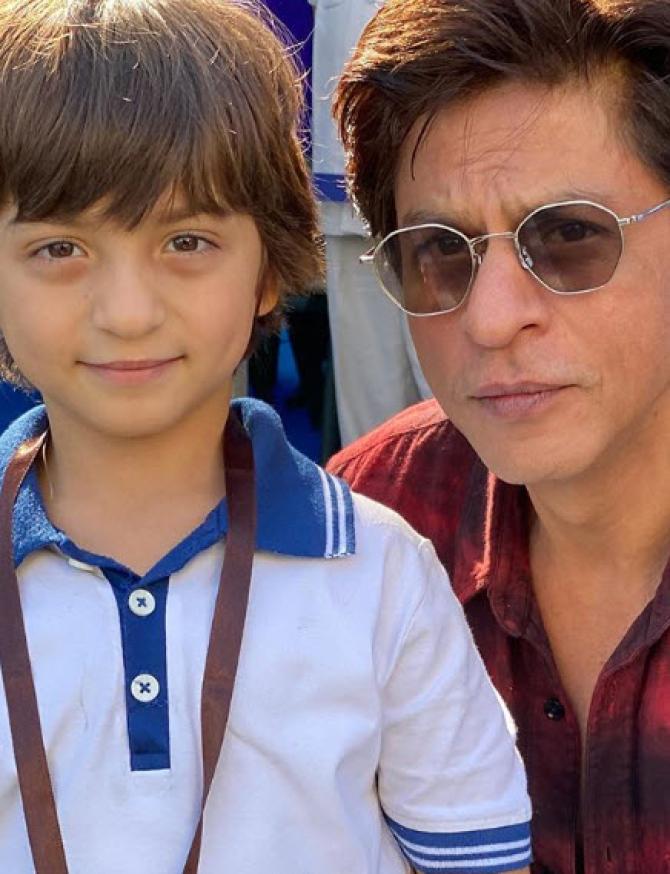 On May 27, 2019, AbRam Khan had turned six-year-old and his star parents, Shah Rukh Khan and Gauri Khan had organised a Marvel-themed bash for the birthday boy. A few days after the birthday bash, Shah Rukh had delighted his fans with the pictures of the brother-sister trio, Aryan Khan, Suhana Khan and AbRam Khan from the party. Sharing two pictures, the doting daddy had written, “My Trio of Sugar & Spice & everything Nice....and oh yeah!  Gauri’s too.” And he had captioned the other post as, “Another sweet picture from AbRam’s birthday party... #fathersloveoverload” Shah Rukh Khan was last seen in the film, Zero, which was released in December 2018 and since then, his fans have been eagerly waiting for the announcement of his next film. But to everyone’s disappointment, Shah Rukh is not taking up projects for some time as he wants to spend quality time with his family. In an interview with the Filmfare magazine, Shah Rukh had stated, "I have no film with me right now. Usually what happens is when your one film is coming to an end, you begin work on your next film and I get involved within 3-4 months... But this time I am just not feeling like...My heart doesn’t allow me to... Even my kids are in their college stage...So I just want to spend more time with my family." (Also Read: Smriti Khanna Flaunts Her Eight-Month Baby Bump, Shares An Adorable Video Of 'Baby Kicks') 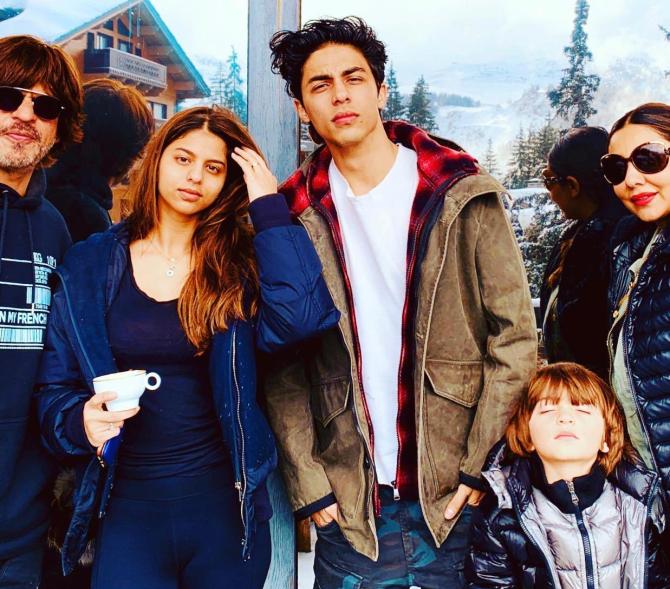 Well, what do you think about AbRam’s adorable drawing? Let us know.