Tara Sutaria turned 25 on November 19, 2020 and her rumoured beau, Aadar Jain penned the sweetest wish for her. Take a look!

Rumours and speculations are a part of a celeb’s life and their personal life is always under the radar of media. From their career graph to whom they are dating, their fans wish to know every detail of their lives. Actress, Tara Sutaria is one such celebrity, whose dating rumours with actor, Aadar Jain had been doing the rounds for quite some time. From their adorable PDAs to love-filled comments on each other’s social media posts, the two have been giving serious hints about their relationship. (Also Read: Kajol Shares A Picture Of the 'Men In Her Family', Hubby, Ajay Devgn With Son, Yug And Their Nephews)

Tara Sutaria, who had made her Bollywood debut with Student Of The Year 2 had met the handsome hunk of the Kapoor khandaan, Aadar Jain two years ago at a Diwali party. Revealing the same in an interview with Woman’s Era, Tara had shared that Aadar is ‘special’ to her. And since then, we have spotted Tara being a part of all the celebrations at the Kapoor clan and the two accompanying each other at various events. Although none of them has made their relationship public, but their constant outings are proof enough that they are head-over-heels in love with one another. Tara Sutaria turned 25 on November 19, 2020 and is celebrating her birthday with Aadar Jain in Maldives. To wish his ladylove on her special day, Aadar took to his IG handle and shared an adorable picture with her and wrote, “Happy 25th Principessa.” On Aadar’s post, Tara’s comment was unmissable as she wrote, “Thank you my whole heart. Life is beautiful with you!” 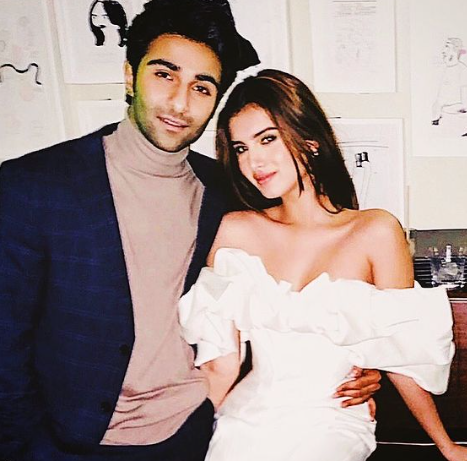 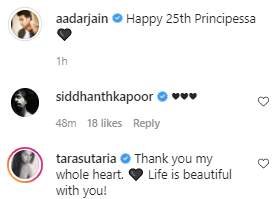 Not just Aadar Jain, his cousins, Kareena Kapoor Khan and Riddhima Kapoor Sahni too wished Tara. Kareena took to her IG stories and shared a monochrome picture of Tara and wrote, “Happy birthday dear @tarasutaria.” On the other hand, Riddhima shared a selfie with Tara on her IG stories and wrote, “Happiest birthday @tarasutaria.” Not just his sisters, Aadar’s bhabhi, Anissa Malhotra Jain also wished Tara by sharing a picture with her and wrote, “Happy 25th @tarasurtaria. Have the bestest day and year.” (Also Read: KBC 12's Host, Amitabh Bachchan Reveals He Still Writes Love Letters To His Wife, Jaya Bachchan) 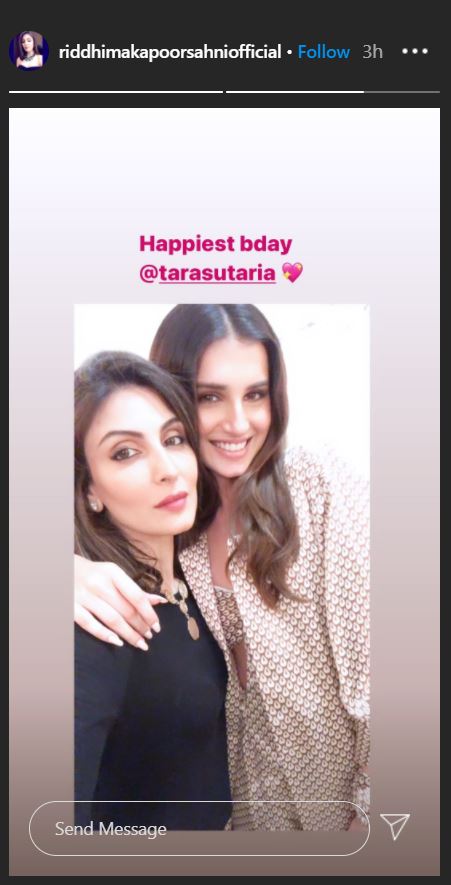 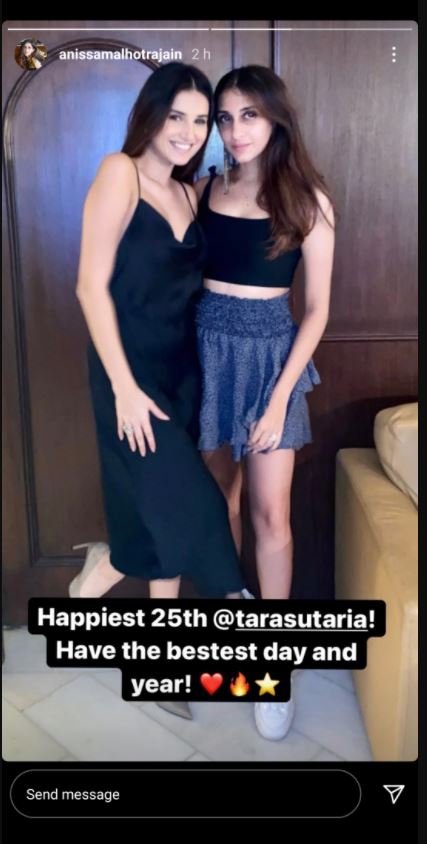 In December 2019, Tara Sutaria and Aadar Jain had attended the U2 concert in Mumbai together and posting glimpses of the same, while he had written, “When I am with you @TaraSutaria” she had reposted the story on her Instagram, with the caption, “Always with you” and had drawn a heart around it. On occasion of Aadar's 26th birthday, Tara had shared a throwback picture of the duo, twinning in white Indian wear with the caption, “Ever thine, ever mine, ever ours! Happy Birthday to my favourite person @aadarjain.” 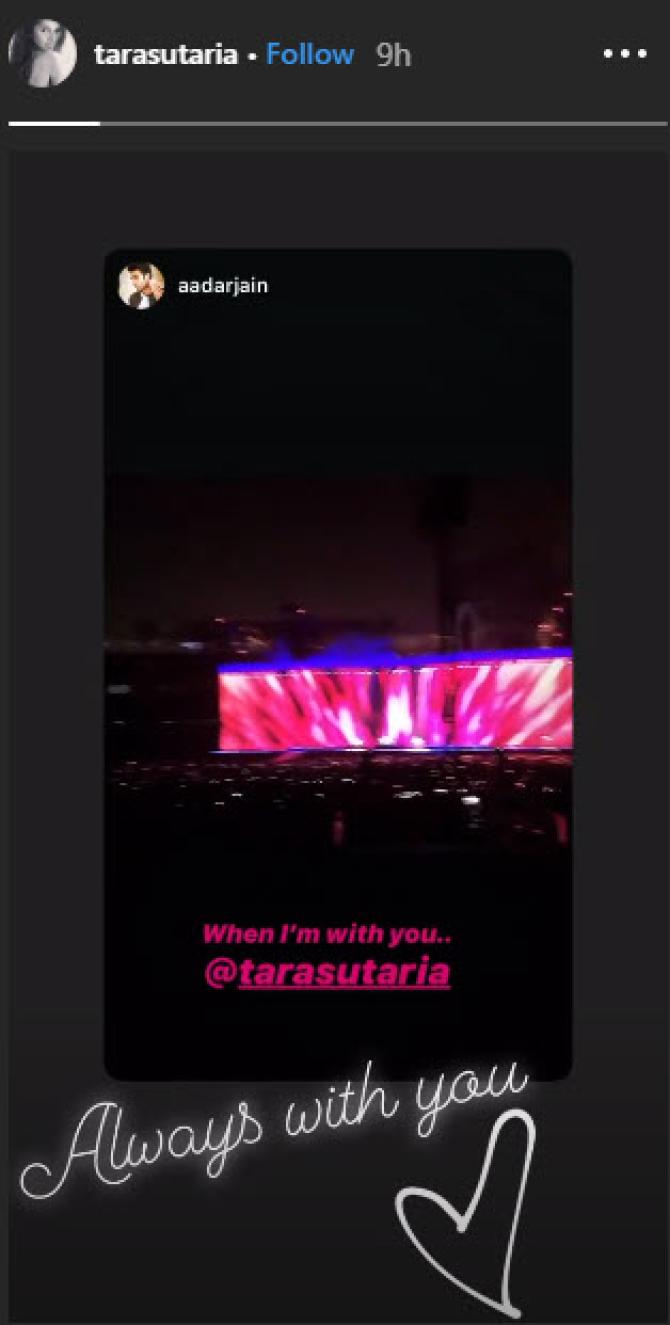 In an interview with Pinkvilla, Tara Sutaria had addressed her relationship speculations with Aadar Jain. The actress had said, "I haven't really said anything ever to a journalist or the media about my relationship. I do believe that if you are with someone, it's very private and scared. Also, in our line of work, very few things are left to someone's imagination. I understand why people tend to keep it to themselves and not share it with people. It's again something that is just the way I've been brought up. If something that's beautiful, wonderful and magical and something that everyone craves in their lives, then I don't think you need to hide it at all. I'm a really private person and I hadn't spoken about it earlier so people can think what they want to think." 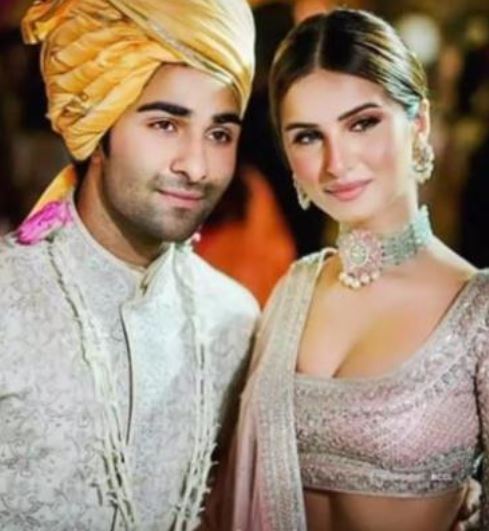 In 2019 when the former had posted some solo pictures from a photoshoot on her IG handle and had captioned them as “Like a song of love that clings to me, how the thought of you does things to me #unforgettable #NatKingCole.” Soon, her beau, Aadar had commented on the post, “Never before, has someone been more.” To which, Tara had replied, “@aadarjain That’s why darling, it’s incredible that someone so unforgettable, thinks that I am unforgettable too. :) Oh, and by the way, counting down the hours.” (Also Read: Is Poonam Pandey Six Weeks Pregnant And Expecting Her First Child With Hubby, Sam Bombay? She Reacts) Student of the Year 2 fame, Tara Sutaria, has been hitting the headlines for her rumoured relationship with the actor, Aadar Jain. Though the duo has been tight-lipped about their relationship status, there have been many instances in which their pictures have gone viral and make everyone think that they