A man, who issued public rape threat against Virat Kohli and Anushka Sharma's daughter, Vamika Sharma Kohli has been arrested by the Mumbai police. Details inside!

In October 2021, Indian cricket team captain, Virat Kohli and Bollywood actress, Anushka Sharma’s 10-month-old daughter, Vamika Sharma Kohli had received rape threats for her father’s statement against religious discrimination. A Twitter user had gone horribly wrong while expressing his disappointment, making the netizens fume with anger over his outrageous tweet. Well, soon after, a search warrant was issued and now, the man has been nabbed by the Mumbai police.

The Delhi Commission For Women (DCW) had sent a notice to the Delhi police, earlier this month, to seek a response over rape threats made for Virat Kohli and Anushka Sharma’s daughter, Vamika on social media. DCW chief, Swati Maliwal had written the letter to the Delhi Police, which could be read as:

Virat Kohli's Birthday: His Wife Anushka Sharma Wishes Him With A Dreamy Picture And A 'Scream' Post

"It is learnt that he is being also attacked since he spoke against the incessant trolling of his teammate Md. Shami who was targeted for his religion by online trolls.This is very serious matter and attracts immediate action."

Also Read: Sunny Leone Takes Her Kids, Nisha, Noah And Asher Out On A Gym Date, They Look Super Happy After a probe, Mumbai Police arrested a 23-year-old man from Hyderabad for issuing a rape threat to Virat Kohli and Anushka Sharma’s daughter, Vamika on Twitter. The accused is identified as Ramnagesh Srinivas Akubathini and he has been taken into custody by the cyber cell of Mumbai Police. The accused is a B-Tech graduate and works in the software department of a food delivery platform. Ramnagesh will be produced before a court after being brought to Mumbai.

Talking about the rape threat, it had happened that after India had lost to Pakistan on a T20 world cup match held on October 24, 2021, netizens had attacked Indian cricket player, Mohammed Shami, disrespecting him and hurling abuses at him for his religion. Virat Kohli, Indian Cricket Team captain, had come out in his support at a press conference and had mentioned how religious discrimination is utterly wrong. He had said:

“There’s a good reason why we are playing on the field and not some bunch of spineless people on social media that have no courage to actually speak to any individual in person. They hide behind their identities and go after people through social media, making fun of people and that has become a social entertainment in today’s world, which is so unfortunate and so sad to see.”

Recommended Read: After An Year, Rhea Chakraborty's Plea Of De-Freezing Her Banks Accounts Is Accepted Soon after Virat Kohli’s statement had gone viral on social media, a fan page on Twitter, which is now deleted, passed the most horrible remarks, directing hatred towards Virat's daughter. The fan page had penned an open rape threat for Virat Kohli’s 10-month-old daughter, Vamika Sharma Kohli, leaving the netizens angry. Sharing a link of the heinous tweet, one user had tweeted:

“The rape threat to #ViratKohli’s 10 month-old daughter, issued after he slammed critics for abusive comments against fellow team mate #MohammedShami, was not peddled by a Pakistani user but by a Telugu-speaking Indian right-wing user @ramanheist.” Many Twitter users had come out in the support of Virat Kohli and Anushka Sharma, expressing their anger over the pity thought process of the Twitter user, issuing rape threats. Here are some of the tweets: 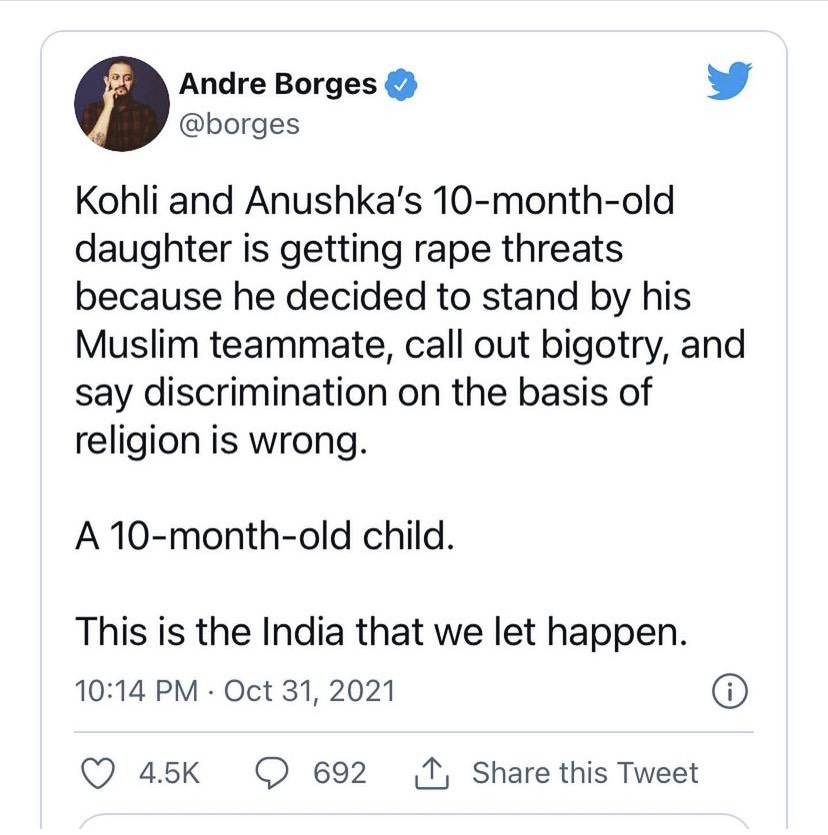 Virat Kohli and Anushka Sharma had welcomed their daughter, Vamika on January 11, 2021.

Next Read: Katrina Kaif Forced Vicky Kaushal To Have A Wedding In December 2021 Instead Of May 2022? Reports