Bollywood is filled with some adorable couples who are together and going strong in their relationship. They are the ones who perfectly define what true love is. There is no doubt that all the Bollywood couples look stunning together. From everybody’s favourite SRK and Gauri Khan to the evergreen couple Rishi and Neetu Kapoor, all of them have had a unique love story, and have stayed together through thick and thin.

Recommended Read: 6 Hot And Happening Celeb Couples Who Parted Ways After Appearing On 'Koffee With Karan'

With time, they have definitely transformed gracefully. Scroll on to find out how your favourite Bollywood couples looked then and how they look now.

This couple’s love story is super-famous by now! Everyone knows exactly how SRK fell in love with Gauri at first sight and the problems the duo faced from her side of the family. But, they wound up together and even today, they seem to be as much in love as they were all those years ago.

You can see how wonderfully they have matured from then to now.

Do Check out: King Khan Reveals The Secret Of His Successful Marriage On His 25th Wedding Anniversary

This is another couple whose love story makes us all turn into mush. They fell in love from the time they shot for their first film together named Tujhe Meri Kasam. Today, their marriage is going strong, with two adorable baby boys.

Genelia and Ritesh are a perfect example of a successful marriage and the pictures show how they have matured from young lovers mad for each other to a mature hubby and wifey.

This couple seems to symbolise the phrase ‘opposites attracts’. Kajol, who is always so bubbly and cheerful is the exact opposite of Ajay, who is introvert and more sedate. Perhaps this is what makes them such a good couple and enables them to enjoy a happy marriage with their two children.

You need to take one look at the picture to see the drastic change in both of them over the years.

You May Like: 11 Real Life TV Couples Who Have A Steady Relationship Even After Many Years Of Being Together

They are rightly called an evergreen couple. Simply looking at them together is enough to make anybody feel jealous! This couple’s marriage has stood the test of time. Even today, they stand by each other and support each other’s decisions, all whilst having independent thoughts and opinions of their own.

They are till date, one of the most powerful and respected couples in Bollywood. Sophisticated and pleasant, they always keep to themselves.They have had a long and a very happy marriage, and the difference between their then and now is quite vivid!

Needless to say, both of them have transformed gracefully, looking simply flawless today.

Don't Miss: 5 Famous Celebrity Couples Who Got Married On The Day Of Love, The Valentine's Day

Of course! The list would be incomplete without the mention of Bollywood’s number 1 couple – Amitabh Bachchan and Jaya Bachchan. The Bong beauty and the ‘Shehenshah’ of Bollywood tied the knot, perhaps never realising that they would be setting a bar for every other couple. They truly are a golden couple and the pictures tell you all that you need to know about how much and how well they have aged.

Nonetheless, it is heartening to know that they continue to remain in love.

This couple tying the knot was quite unexpected. Nonetheless, Bollywood, as well as fans of the couple, supported them as a couple and of course their marriage. From then to now, the duo has blossomed together and turned their relationship into a mature one.

The arrival of their daughter seems to have made them bloom even more! They have transformed from newlyweds to a caring and a gorgeous couple.

Stylish, regal and royal looking is what this couple looks like. By now, everyone knows about the love story of this famous Bollywood couple. The Nawab and his begum have been very much in talks after the cutest baby, Taimur became the talk of the town and gained all the attention from paparazzi. With the adorable result of their love, it has been seen that their love truly crossed all boundaries and grew by heaps and bounds.

Bollywood Mr Perfectionist, Aamir and Kiran Rao have been one of the inspiring couples as they had set an example of marrying despite the religious difference. Another set of inspiration they gave to couples was the news of their son, Azad through surrogacy. Being one of the motivating couples, even after fights and issues in a relationship, they wound up together and seem to be in love like in those days.

After being involved with many ladies, Sanjay Dutt had found his forever love in Manyata. Their love story has been intriguing and after so many hurdles and issues being faced by Mr Dutt, Manayata endless support towards him proves that they have blossomed over the years. Their pictures exactly show how they have aged from then to now.

Regardless of their age, all of these Bollywood couples still look great together. Which one is your favourite? We’d love to know, so so tell us in the comments section below. 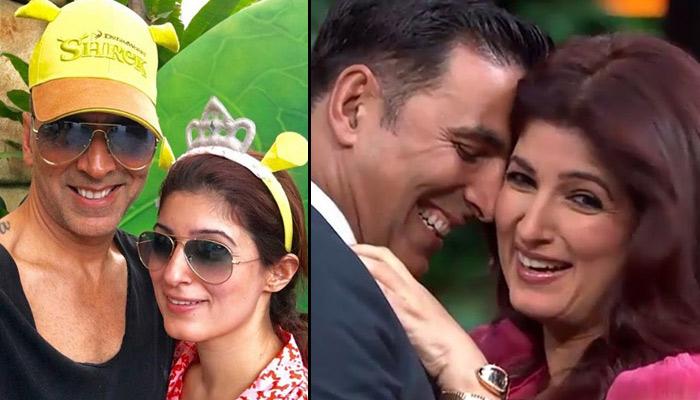 He is the khiladi of silver screen and she is the queen of wittiness. He knows exactly how to become the center of attraction and she is the one who can easily tickle the funny bone of anyone. Any guesses who we are talking about? Yes, you guessed it right! It’s