Famous Bollywood actress, Urmila Matondkar walked down the aisle with her then Kashmiri boyfriend, Mir Mohsin Akhtar, on March 3, 2016, in a secret ceremony. Here's a look at the wedding story of the lovely couple!

There is no denying the fact that secret weddings have become a trend in Bollywood town. Right from Rani Mukerji, Preity Zinta, Anushka Sharma, Surveen Chawla, Shriya Saran, Neha Dhupia, etc. chose to keep their marriage a secret.

Another 90s heroine, Urmila Matondkar also got hitched in a private ceremony on March 3, 2016, and chose to keep it a secret affair. Once she got hitched to her Kashmiri boyfriend, Mir Mohsin Akhtar, then only she declared it to the world. Let's take a look at her beautiful wedding story! 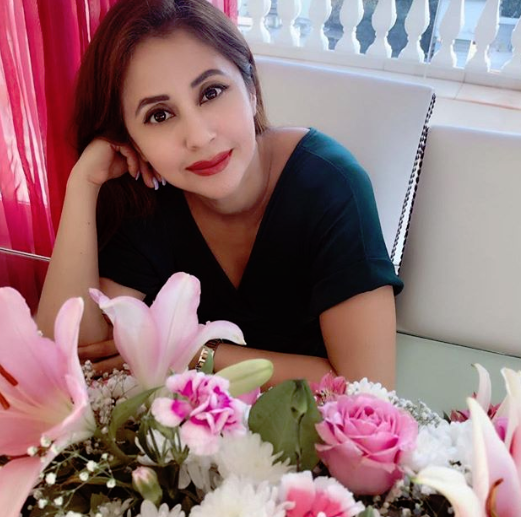 Urmila Matondkar needs no introduction. However, for the uninitiated, she is the face behind many successful films of 90s such as Pinjar, Rangeela, Bhoot, Masoom, Satya, Pyaar Tune Kya Kiya, and many more. She has won several awards and is known not just for her acting skills, but also for her singing prowess. She has sung with Asha Bhosle for her album, Asha and Friends Vol. 1.

She is also a highly acclaimed dancer, and her most famous item number is Chhama Chhama from the film China Gate (1998). She was also seen on the television screen in the second season of Jhalak Dikhlaa Jaa as a judge along with Jeetendra and Shiamak Davar. Urmila was last seen on the silver screen in the Marathi film, Ajoba (2014) directed by Sujay Dahake. And after almost 10 years of Chamma Chamma, she made a comeback on the silver screen with an item number, as Bewafa Beauty for the movie Blackmail. 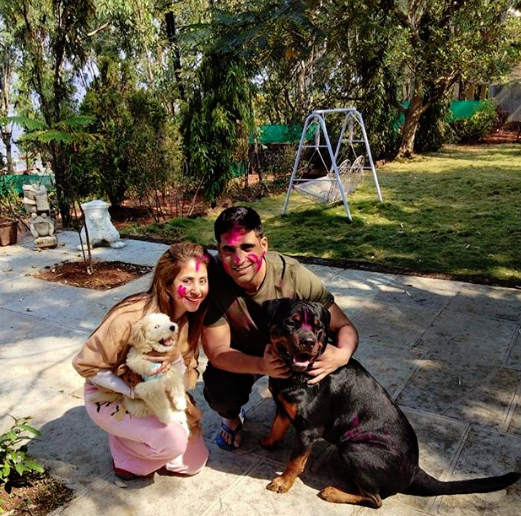 The groom, Mir Mohsin Akhtar is a Kashmiri. He comes from a family of businessmen. He left his family home at the age of 21 to try his luck at modelling. He was the second runners-up at The Times of India, Mr India 2007 competition. He walked the ramp for designers such as Taroon Kumar, Manish Malhotra, Vikram Phadnis, and Ranna Gill. He even tried his luck in Bollywood with films like It’s A Man’s World, Mumbai Mast Kallander, and Luck By Chance. He is almost ten years younger to Urmila. Mohsin has a brother and three sisters who are all very close to Urmila.

Where did they meet? Urmila and Mohsin met at Manish Malhotra’s niece, Riddhi Malhotra’s wedding in 2014. And, it was there that Mohsin was completely smitten by Urmila. As per a report in the Mumbai Mirror, he wooed her in complete filmi-style. He pursued her for over a year before she finally gave in. Manish Malhotra had said:

“So happy for Urmila and Mir. They met at my niece’s wedding in 2014. She made a beautiful bride!” 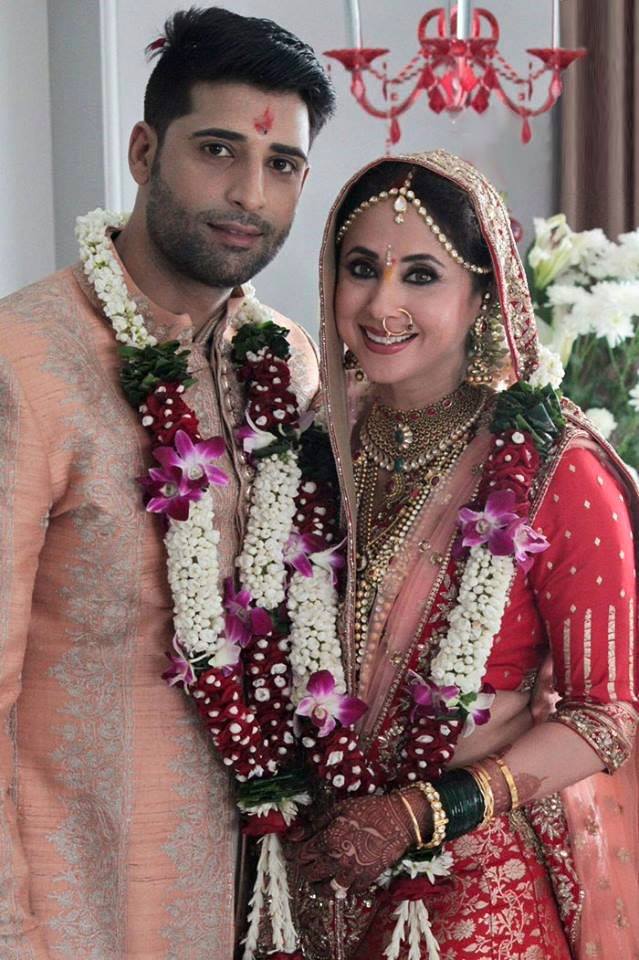 Urmila and Mir got married in a private ceremony on March 3, 2016, at Urmila’s residence itself. Only family members and close friends were invited to the wedding. In a statement, she had said:

“We kept it an exclusive wedding with just family and friends at the celebration. Since our families wanted the wedding to be a low-key affair. We mutually decided to keep it private. We seek your blessings on embarking this new journey of our lives.” 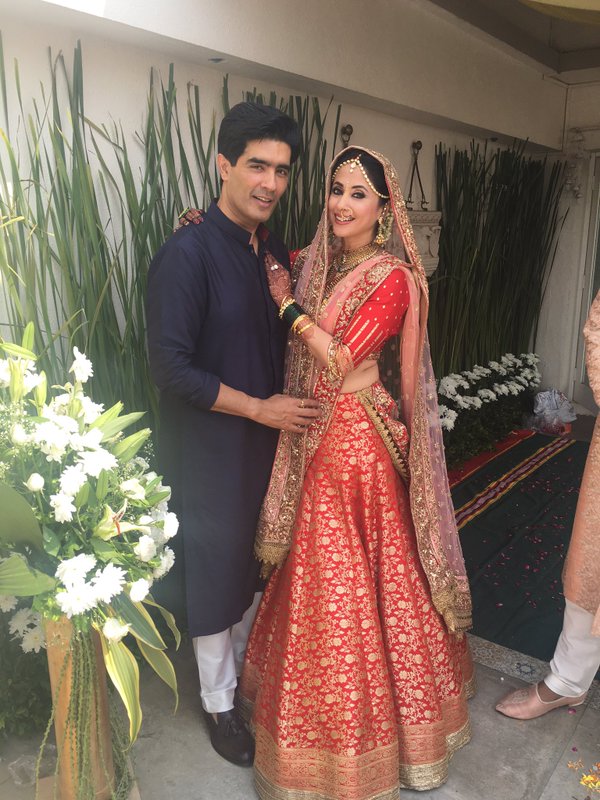 Only close friend Manish Malhotra was present at the do. Urmila’s sister, Mamta was the wedding planner for her, and she had managed to keep all the preparations under the wraps. Her residence on Turner Road in Bandra was lighted up in blue, red and yellow lights. The mandap was made on the terrace and was well-decorated. It was a Hindu wedding, later followed by an intimate nikaah ceremony. 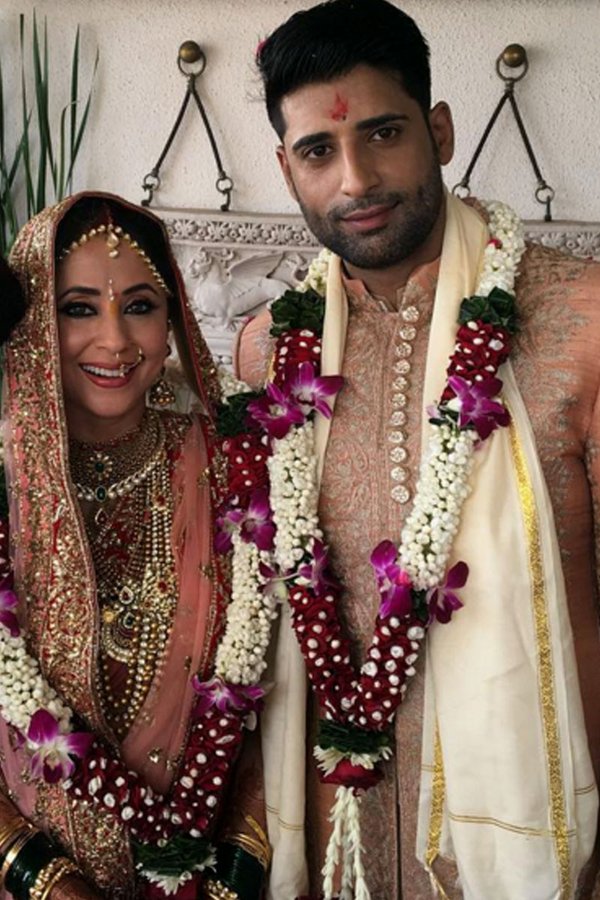 Mohsin’s family flew in from Kashmir a month before the wedding to fix the wedding date. Urmila looked ravishing in a red and golden lehenga designed by Manish Malhotra. Her mehendi and jewellery looked stunning, and the bridal glow radiated on her face. Mohsin too complemented his bride well in a peach-coloured kurta and a white pyjama. As per the same report in Mumbai Mirror, Mohsin and Urmila threw a party for their friends on March 2, 2016. The couple stays together in Urmila’s house. Here are a few more pictures from their wedding ceremony: 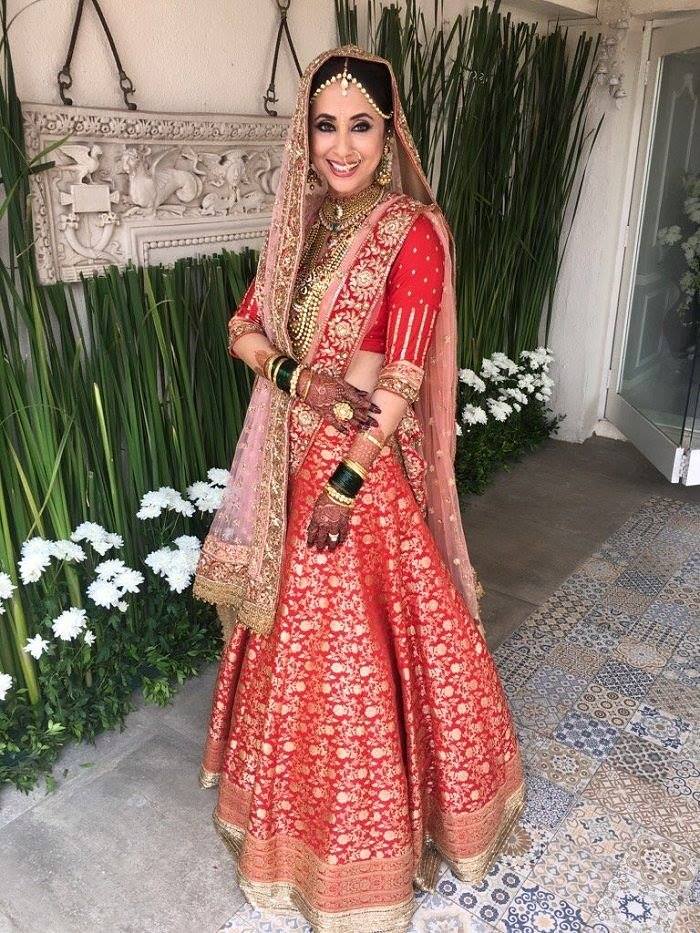 Not just this, the couple even hosted a reception party where Urmila was seen in a stunning white and golden ensemble, and Mohsin was seen in a black suit. Here are the pictures from their gala wedding reception: 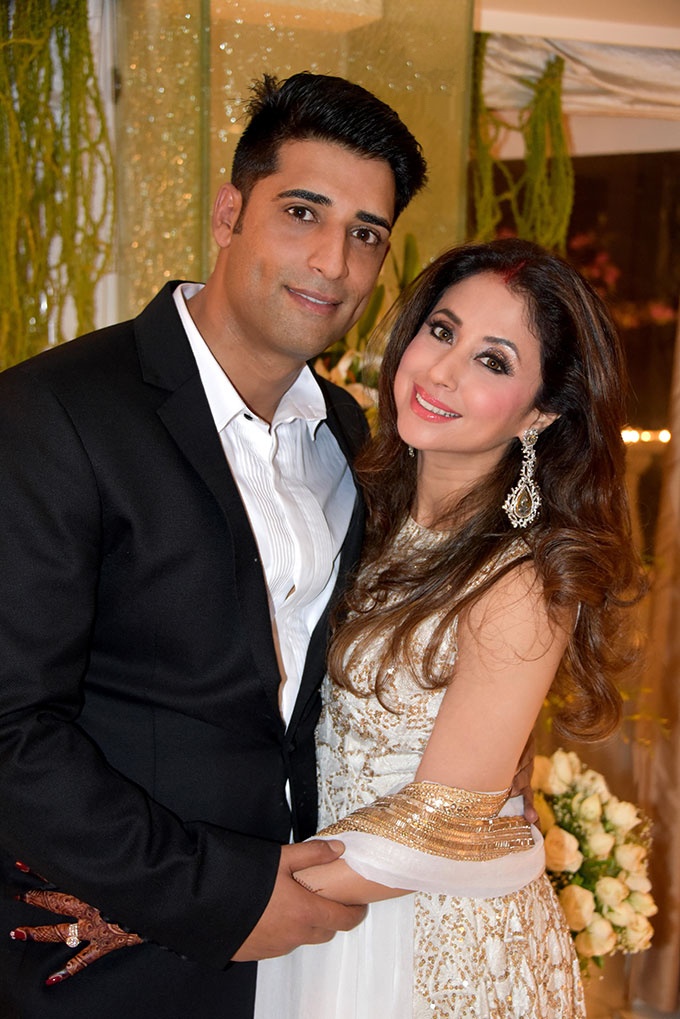 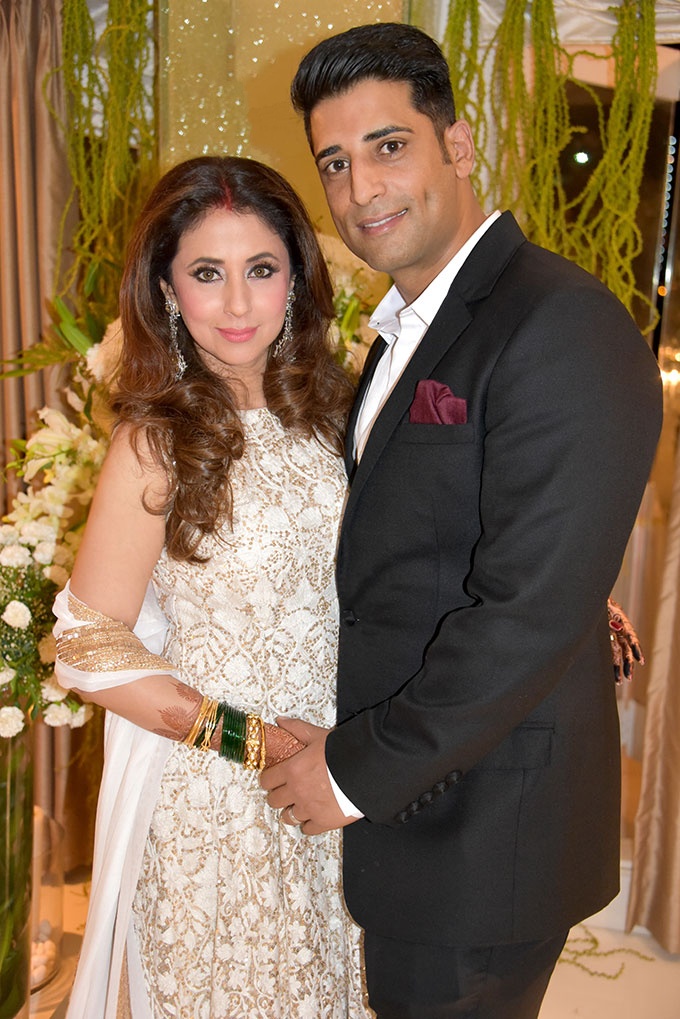 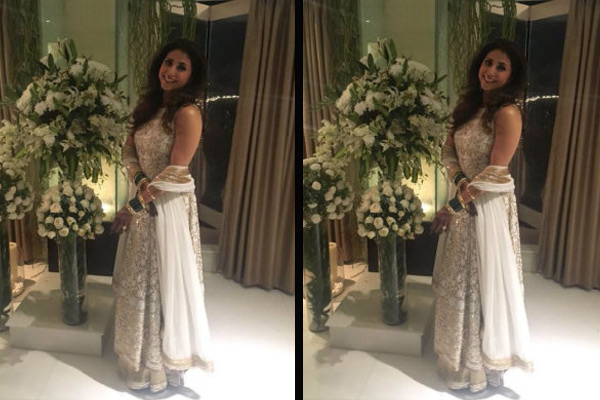 The newlyweds also went to the Golden Temple, Amritsar to seek blessings from the almighty. Paulomi, who is Urmila's friend and was a part of the celebrations had said:

"They have gone to the Golden Temple today to seek blessings. Once they are back, we shall gear up for the Nikah. A reception is also being planned by them." 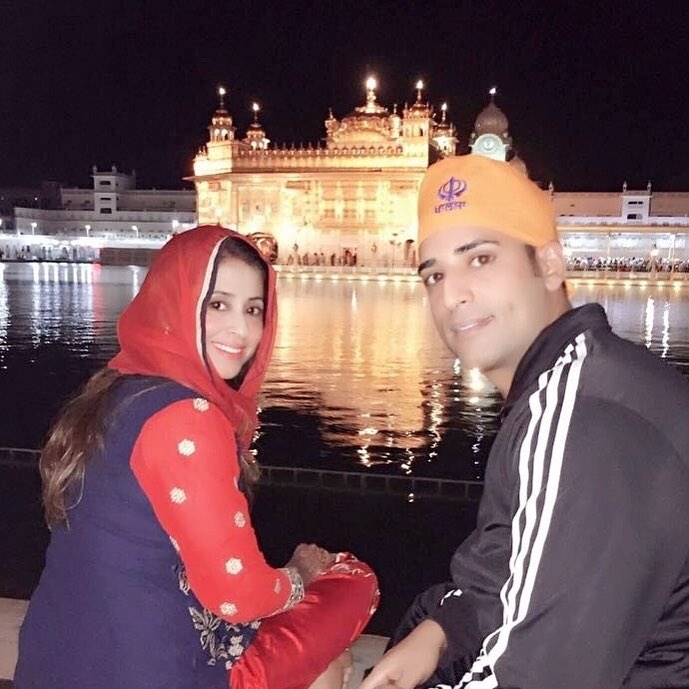 Wishes for the couple Freddy Daruwala, the hot baddie of the film, Holiday who was a co-contestant with Mohsin in the Mr India model hunt of 2007, congratulated the couple and had said:

“Congratulations. It has come as a huge surprise to me. Mohsin was with me in the contest. He is a great guy, wonderful person and I’m sure he will make a fabulous husband for Urmila.”

Actor Rishi Kapoor, who is known for his quirky way of wishing took to his Twitter account and had tweeted:

“Urmila who played my daughter like, sister and lover in films. Wish you all the best in your married life. God Bless!” 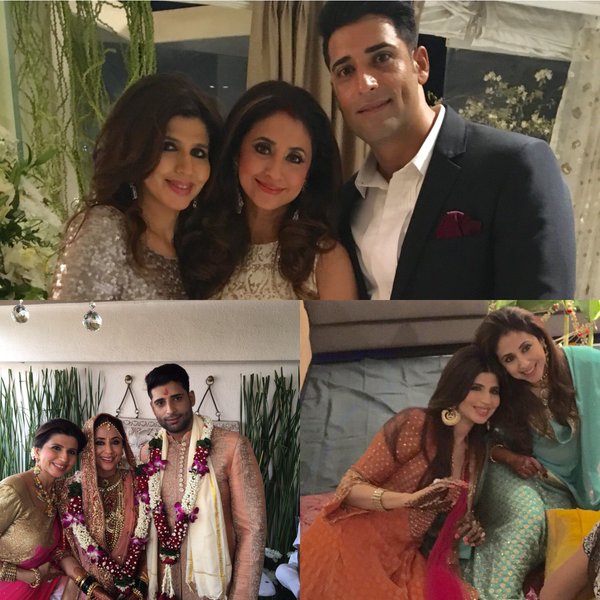 Actor Dia Mirza, who worked with her in the movie, Tehzeeb had wished:

Actoress Raveena Tandon also wished the actress and had written:

"What a pleasant Surprise! Wishing her all the happiness in the world!! @ManishMalhotra" 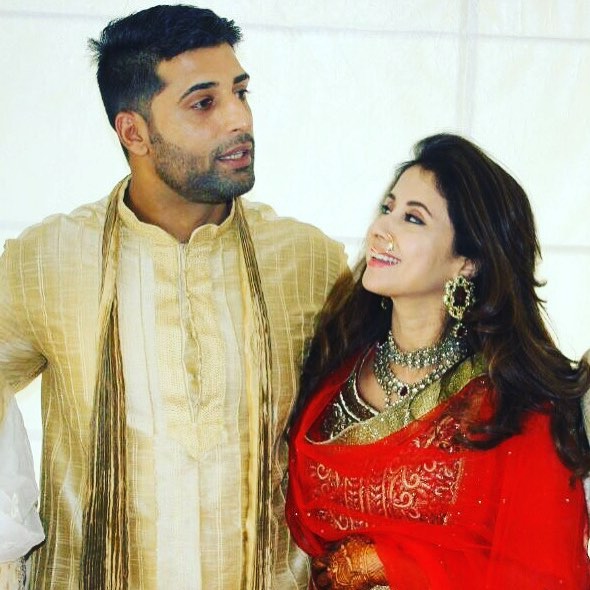 Ram Gopal Varma, who was Urmila’s alleged ex-lover also took to Twitter and had said:

“Extremely happy to hear news about the most beautiful actress I ever worked with .. I wish from heart that her life wil b "Rangeela" forever”

Actor Anupam Kher too wished the lovely actress and had said:

"Congratulations #UrmilaMatondkar for your wedding. May you have a great married life."

Sophie Choudry too wished the lovely bride, and had written: 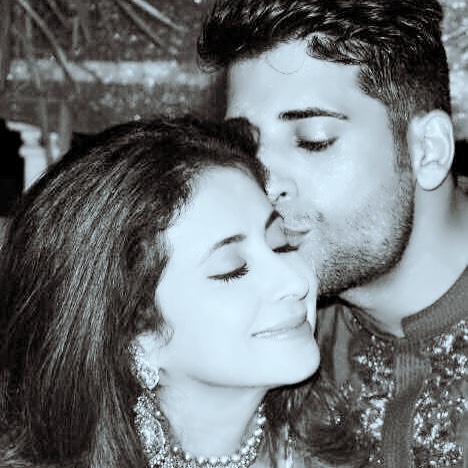 Urmila and Mohsin have completed three years of their marriage and the two look absolutely gorgeous together! We wish them all the happiness in this world