If there is any one reality show which has garnered and generated maximum controversies recently, it has to be Bigg Boss 11. Even after 4 months since the show witnessed its finale, its contestants have been making it to the headlines every now and then.

And one of Bigg Boss 11’s most controversial contestants has been Hina Khan. The Yeh Rishta Kya Kehleata Hai actress has been more in the news because of her love affair with her boyfriend, Rocky Jaiswal, and less because of her controversial statements on the show. (Also Checkout: Television Couple Hina Khan and Rocky Jaiswal Are Enjoying Their Dubai Vacation, Pics Inside!)

Hina Khan Opens Up About Her Marriage Plans With Rocky Jaiswal, Has A Big Revelation The moment Rocky proposed Hina on the national television, it sparked speculations of the highest degree. Not just because of Hina and Rocky’s relationship but also because of an alleged love affair between Hina and another contestant, Luv Tyagi. Even though the three of them have regularly denied such conjectures, netizens can’t help but associate Hina with Luv. In a recent, Instagram live session, one of the users openly said to Hina, “Rocky kutte ko daffa karo and Luv se shaadi karo.” A normal person in love would either bash the troll or block him/her permanently. But instead, Hina Khan laughed it off and politely said that she had has this discussion with Luv and also revealed that Luv hates such talks. (Also Read: Karan Johar Shares Adorable Pics Of Twins, Golden-Haired Yash And Roohi With Her Tiny Teeth)

We wonder why Hina didn’t give this troll a befitting reply on the live session itself. However, one thing is sure that this Bigg Boss fan still can’t get over the alleged Hina-Luv chemistry.

Earlier, while the Bigg Boss 11 was still on the air, allegedly there were many signs that Luv had a soft corner for Hina. When netizens started tweeting, retweeting, commenting and liking about Hina-Luv’s alleged relationship, Rocky came out in the open and maturely said, “Luv ka ek tarfa pyaar nahi hai pehle baat to…agar kuch soft corner hob hi sakta hai to it’s very natural yar… I mean I fell for Hina anybody can fall for Hina.. So it’s not a big deal.” On the other hand, even after Bigg Boss 11, Hina and Rocky have been going strong and their regular PDAs prove that the lovebirds are head over heels in love with each other. Recently, on her marriage plans with Rocky, Hina commented, “No, not at all. If anything happens, it will be marriage which I've already said won't happen anytime before 3 years. I don't understand why can't they do without making news that includes me. This is nonsense.”

To an online media portal, Rocky recently revealed why he fell in love with Hina. He confessed, “We met on the sets of Yeh Rishta Kya Kehlata Hai for the first time where I was the supervising producer and she was playing the lead role. That's how we met. As for what attracted me to her was her dedication to her work. I have seen a lot of actors, but she is one of the smartest of the lot.” 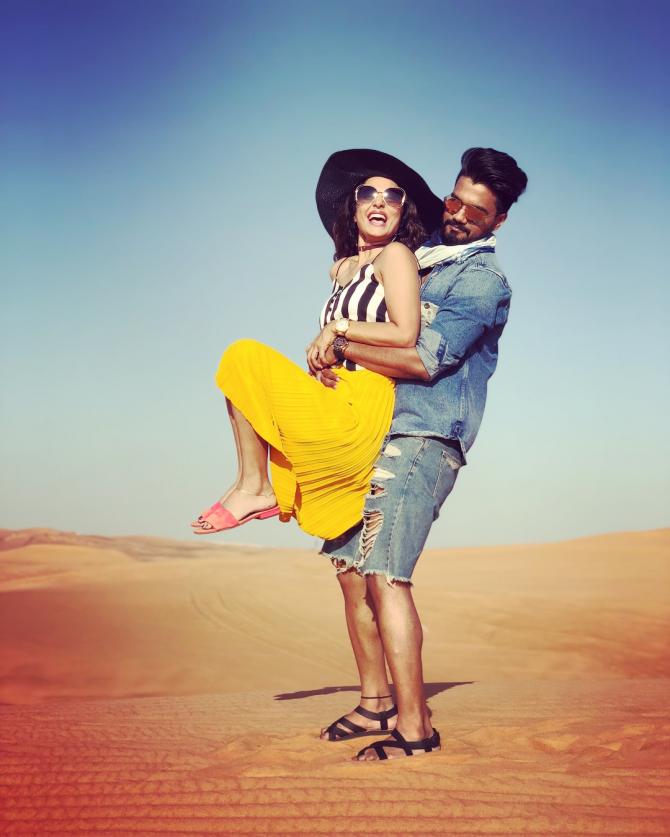 He also reverently added, “It is almost unreal if you find a person who's so honest all the time. She calls a spade a spade every single time. And that's the most important thing I love about her. Besides, she is the prettiest woman in the world. “

Wow! There is definitely no place for the trolls who associate Hina with Luv. We can’t wait more for Hina and Rocky to tie the nuptial knot.

Next Read: Karan And Bipasha Dance And Twirl Intimately On A Romantic Song On Their Anniversary