They say that when two people are destined to be together, no matter the distance that is keeping them apart, they somehow find a way of coming together. That is exactly what happened with our featured couple for this week, Arjun and Anoli. It was only their ‘first meeting’, which was left to happen because ‘love at first sight’ was ready to strike as soon as they met. So, join us as we take you through the magical love story and wedding journey of this gorgeous couple.

The beautiful start to their journey 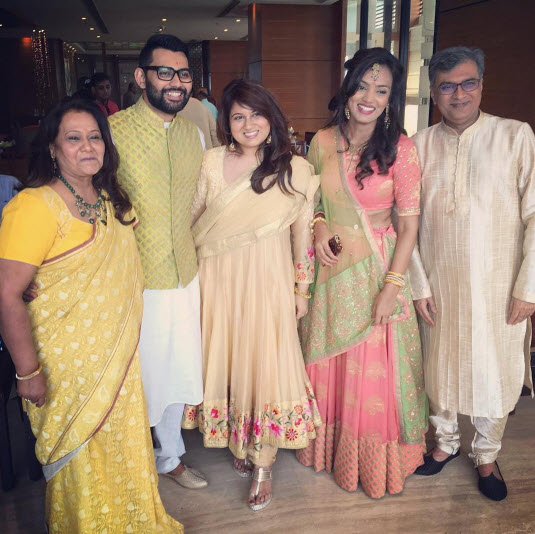 It all started when the two were asked to meet through an arranged marriage set up. Anoli, a fashion designer and Arjun, a businessman whose work commitments keep him busy shuttling between Mumbai, Dubai and Nigeria, somehow weren’t getting the time to meet each other because of their busy travelling schedules. But finally, thanks to their insistent aunt, Arjun flew down to Ahmadabad to meet Anoli, and that was it. 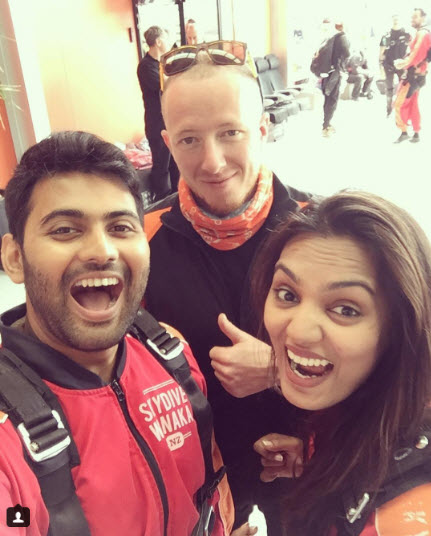 “Arjun came to Ahmedabad to meet me during the Makar Sankranti festival. After having lunch, I took him to a friend’s terrace so he could also experience the traditional kite flying practice in Gujarat. It is funny - and maybe nobody would believe us - but by the end of the day, in our heads, it was a ‘yes’ from the both of us. Following that, we met a few times in Mumbai and Ahmedabad and felt like we had known each other for ages. The whole journey felt absolutely effortless.”

The proposal straight out of dreamland 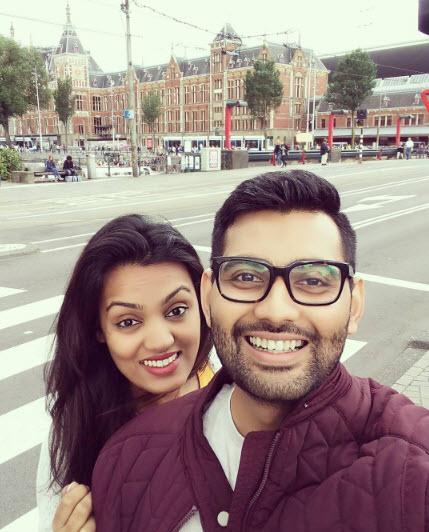 It was then time for the proposal. And Anoli being a lucky girl got a dream proposal, one that every girl wishes for and sees only in movies. As Anoli said:

“He had planned the proposal with my friend, and had asked me to accompany him to a sundowner yacht party. It was only when we reached the Dubai Marina Yacht Club that I saw him go down on one knee, in front of the iconic Burj Al Arab, with a ring and ask me to marry him!”

And of course, it goes without saying that awed by this gesture, she instantly said yes!

The choice of their wedding photographer

The wedding photographer is one of the most important persons throughout the celebrations. He is the one who captures the memories of the most special day of your lives, so that you can look back at them, smile and cherish all the sweet moments of your big day. Without a doubt, every couple wants the best photographer for their wedding, and so did Arjun and Anoli. They picked 'The Photo Diary' as their photographers and this blissful couple couldn't have been happier about their decision. This is what they had to say about the photographers:

"Both of us always wanted someone who is not a conventional wedding photographer and never wanted clichés because that’s just who we are. We instantly clicked very well with Monisha and she really understood the fun carefree vibe we wanted for the coverage of the wedding and no-one would’ve done a better job at it then what they have.'

The beginning of ‘Forever’, with all things pretty and quaint 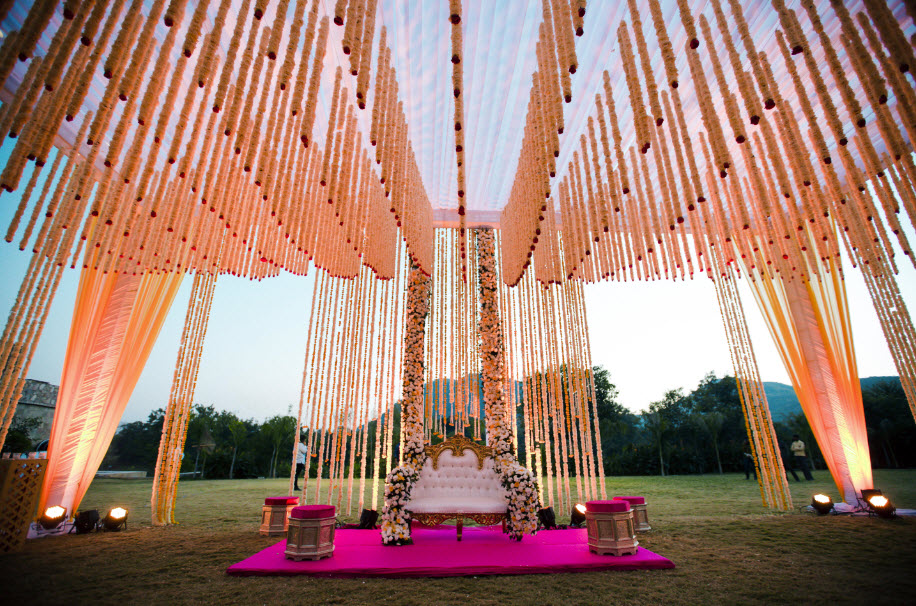 After the fairytale proposal, it was time for the wedding festivities to begin. For this, they first had to select a venue that both would like and one which could accommodate all their guests too. And fulfilling Anoli’s dream of getting married amidst hills, the Ananta Hotel, Udaipur, was the property that they selected for the most special occasion of their lives. 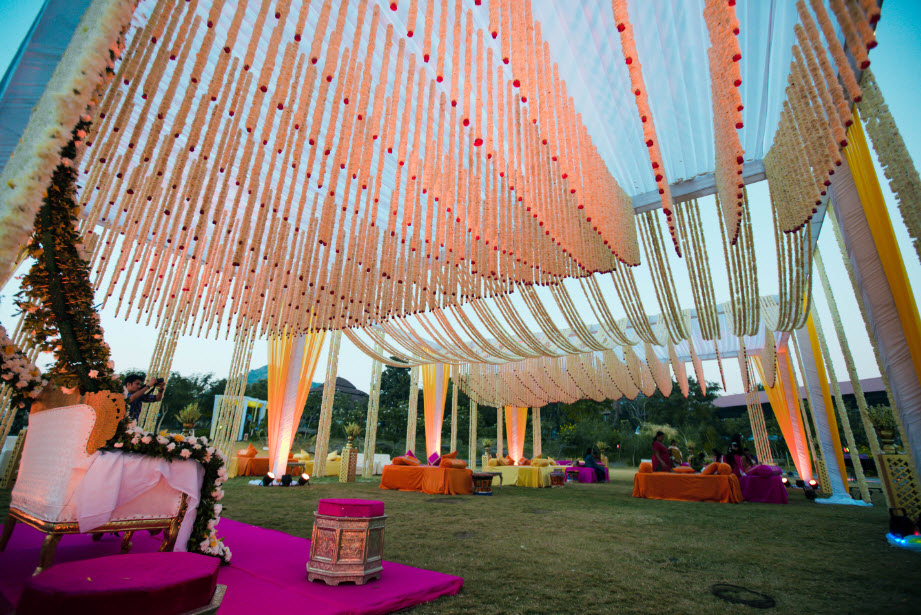 Being a designer herself, Anoli knew in her mind exactly what she wanted when it came to the wedding décor. So, she roped in ace designer Krutika Bolaki to do the décor which was done up primarily in pastel shades and bright colours with a twist of traditional aesthetics. Many functions together made up this beautiful wedding. Let us take you through some of them. 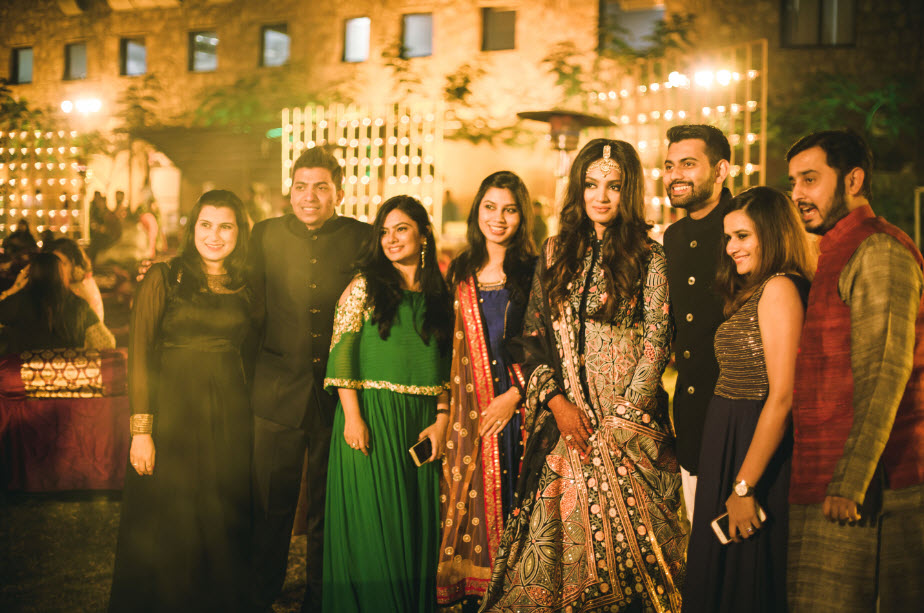 This was one fun night, which was graced with the presence of mesmerising performances by professional Sufi singers. The place looked surreal in a colour scheme of orange and gold and the ambience was magical with the décor being done up with red roses, vintage utensils and pots.

Also Read: This Indian Bride And Groom Make The Badass Entry On A Hoverboard At Their Wedding 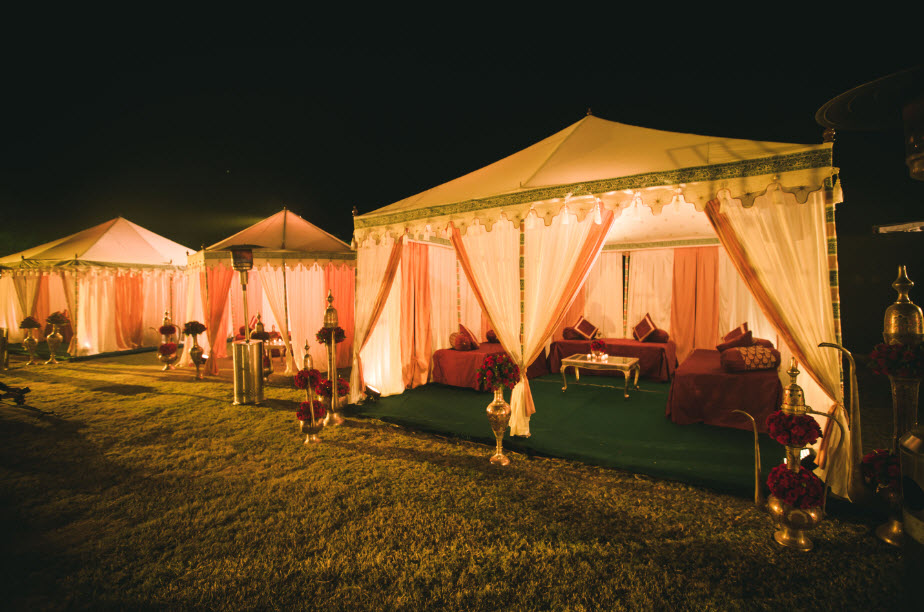 The melodious tunes of the night kept everyone engaged in their personal illuminated tents. 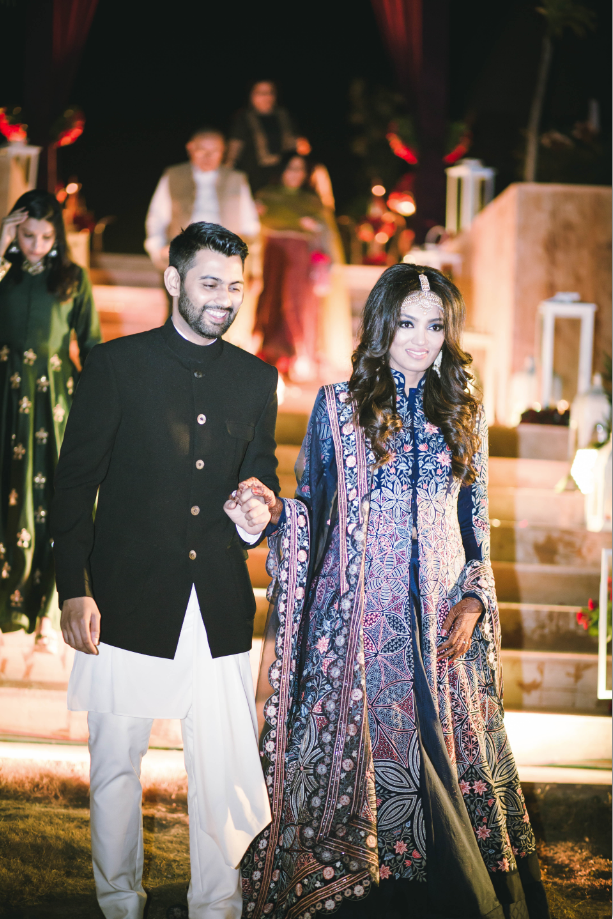 Anoli looked like a diva in a midnight blue embroided dress by Rahul Mishra, whereas the groom Arjun wore a Shantanu and Nikhil classic black bandh gala.

Here are some more pictures from the qawwali night: 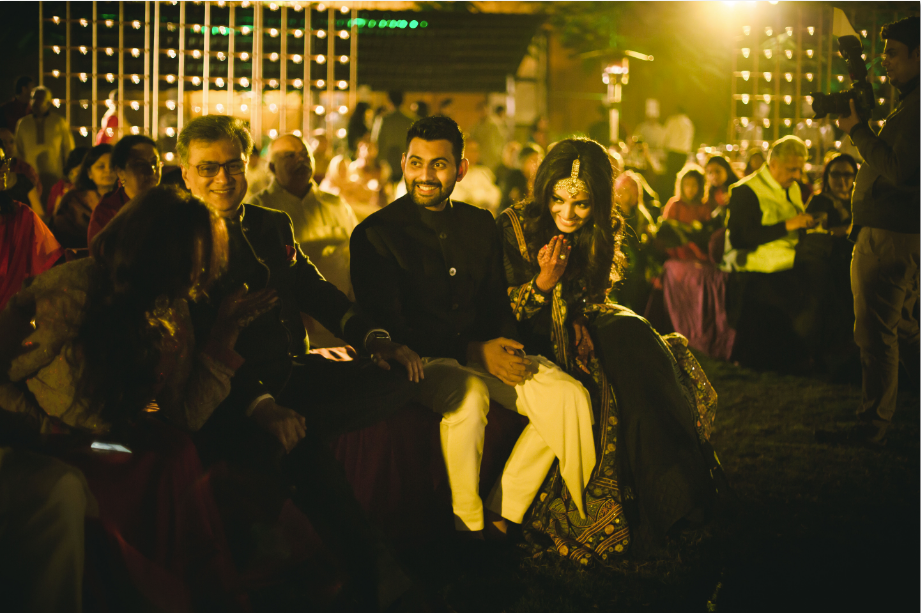 Check Out: 7 Unusual And Inspiring Real Indian Weddings That Stole Our Hearts Then it was time for the sangeet, where both the bride and the groom matched not only each other’s steps for the performances, but also their outfits. The two looked like a royal couple dressed in Shantanu and Nikhil outfits. 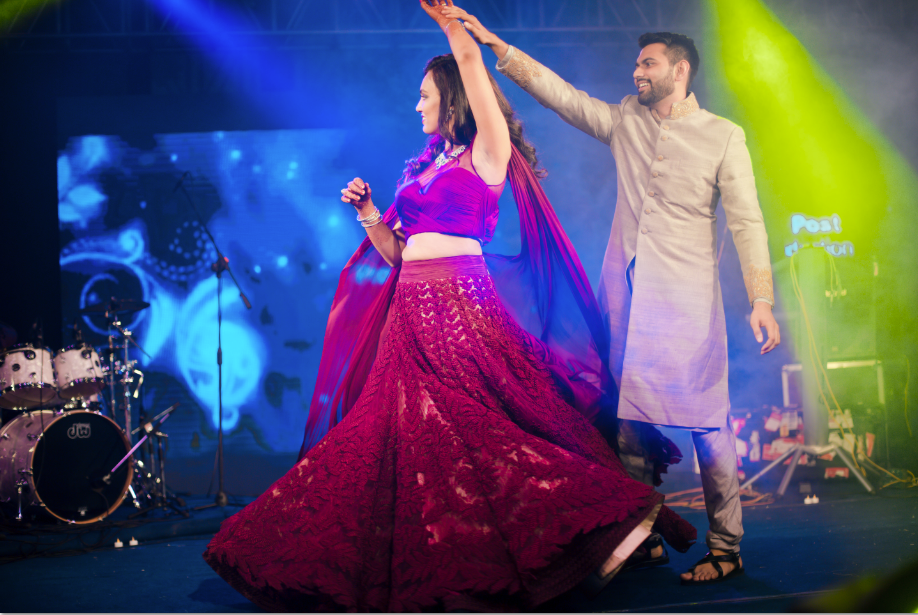 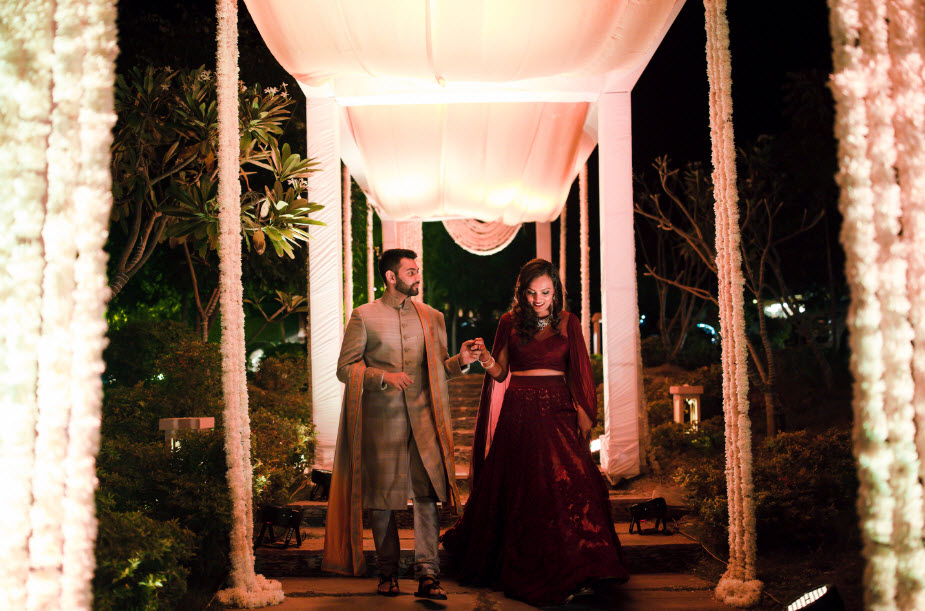 There were dance performances by family and friends. 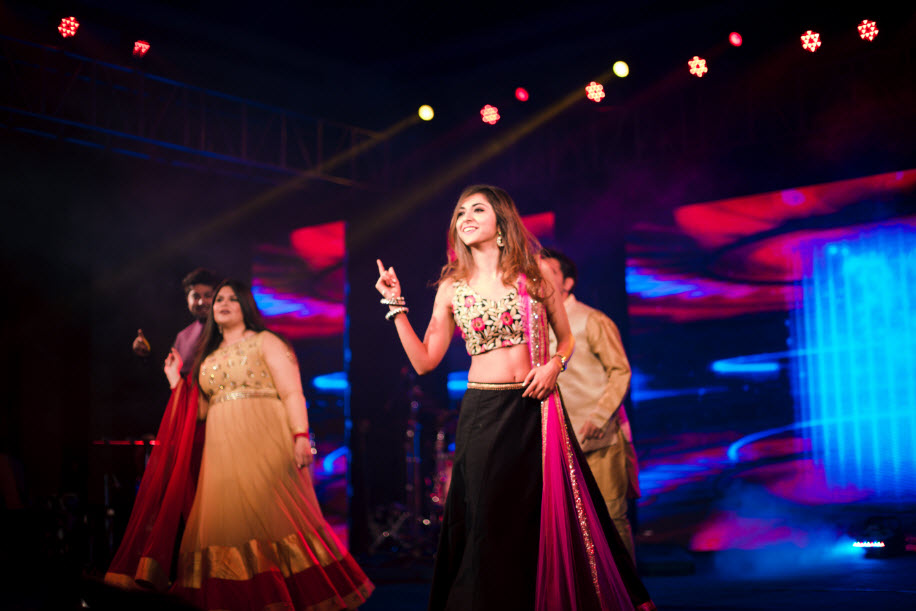 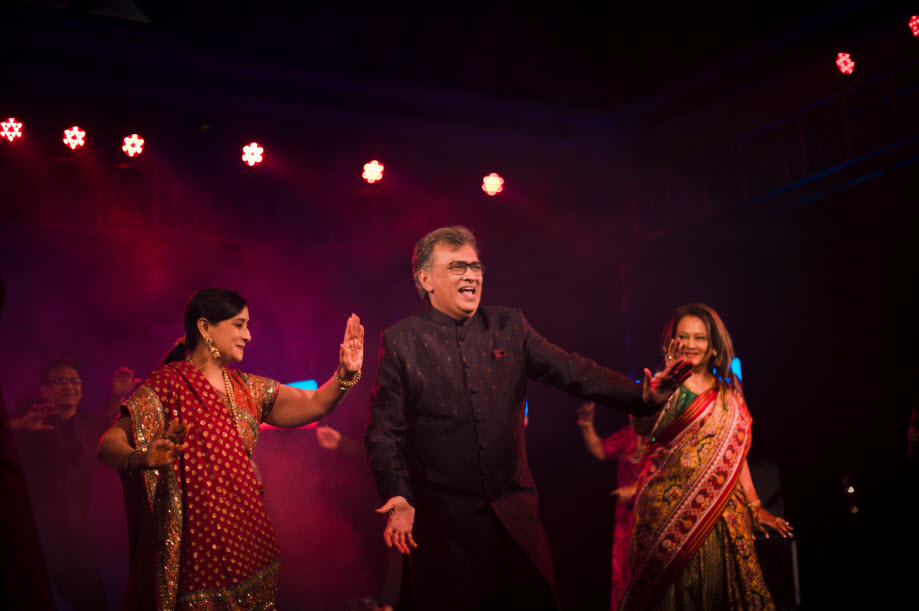 Only close friends and family were invited for the haldi ceremony and so it was a simple, close-knit affair. 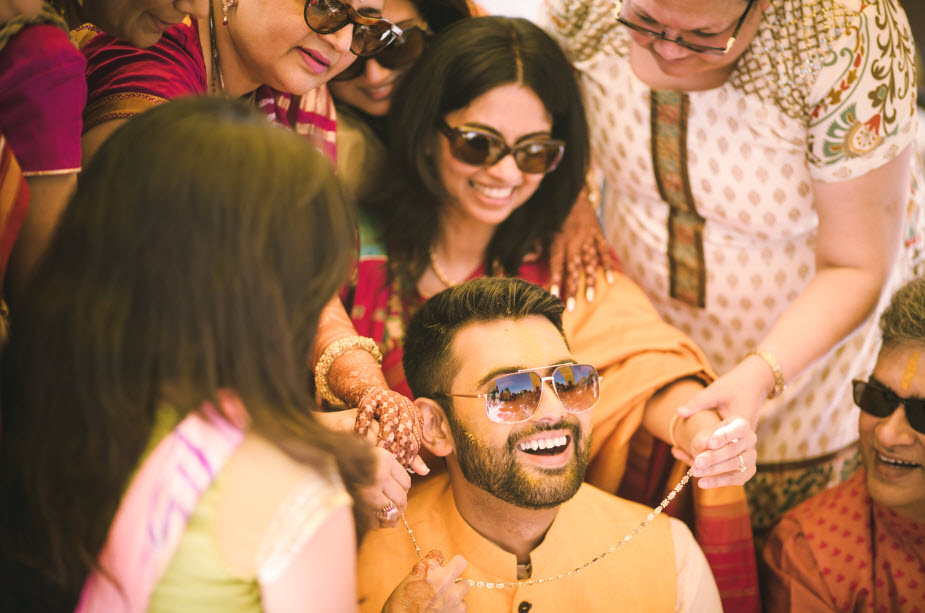 Everyone looked happy and enjoyed it to the fullest. Both the bride and the groom wore outfits which were in hues of yellow and looked absolutely lovely.

Do See: A Million Dollar Fairytale Indian Wedding In Vegas Will Blow Your Mind Finally, the most awaited function had arrived- the wedding! Being a designer herself, for the wedding, Anoli wore a self-designed red and gold zardozi lehenga and looked like a dream. 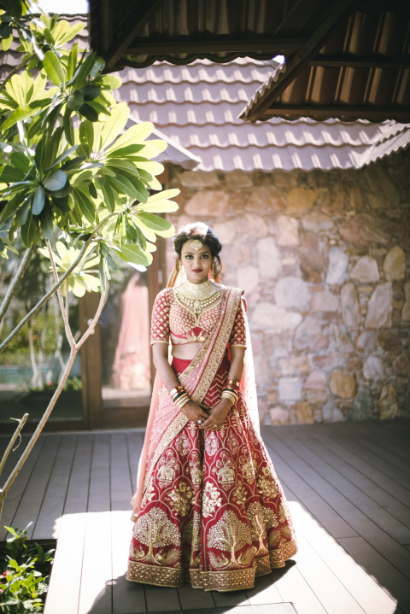 Her makeup artist Ojas Rajani gave her the perfect matte face and bold lips effect. This look was appropriate for a beautiful day wedding. For her jewellery, she chose to wear a long gold choker with danglers and a maang teeka. The look was finished off with a beautiful bun hairdo. Talking about her lehenga, Anoli said:

“I've always wanted a traditional red colour for my wedding outfit. My lehenga was inspired by the arches of the different palaces in Rajasthan and features key elements that are also very Rajasthani like the elephant, the royal garden, peacocks, lotuses etc. I wanted my lehenga to be a celebration of the different rich embroideries from different parts of our diverse country that I have loved and used in different collections of mine over the last few years. Every motif in the lehenga is done using a different embroidery technique. The embroideries include Marodi, aari and pita among others.” 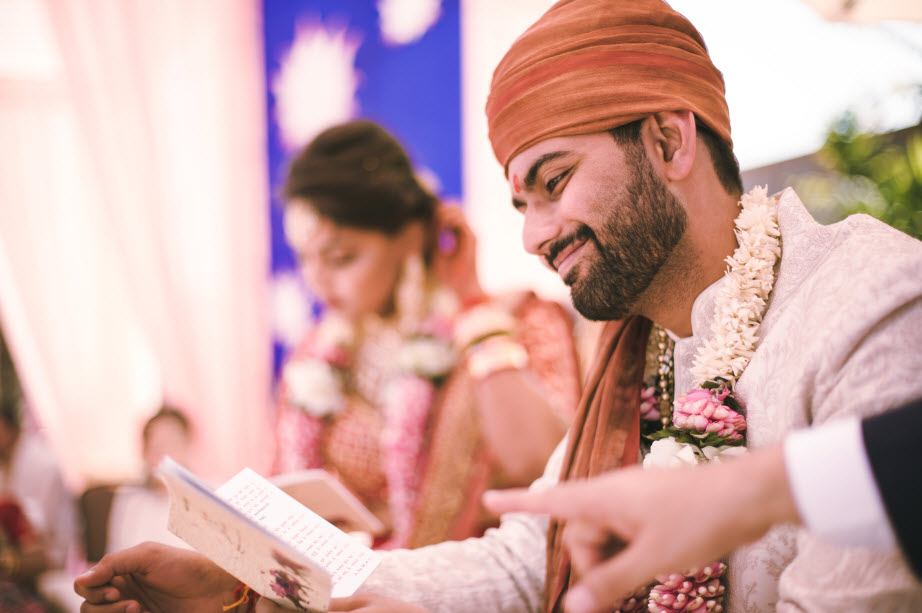 Arjun looked like a prince, dressed in a Rohit Bal creation which was a white sherwani with a brown turban. And the wedding décor was a very traditional one with hanging garlands and bells. 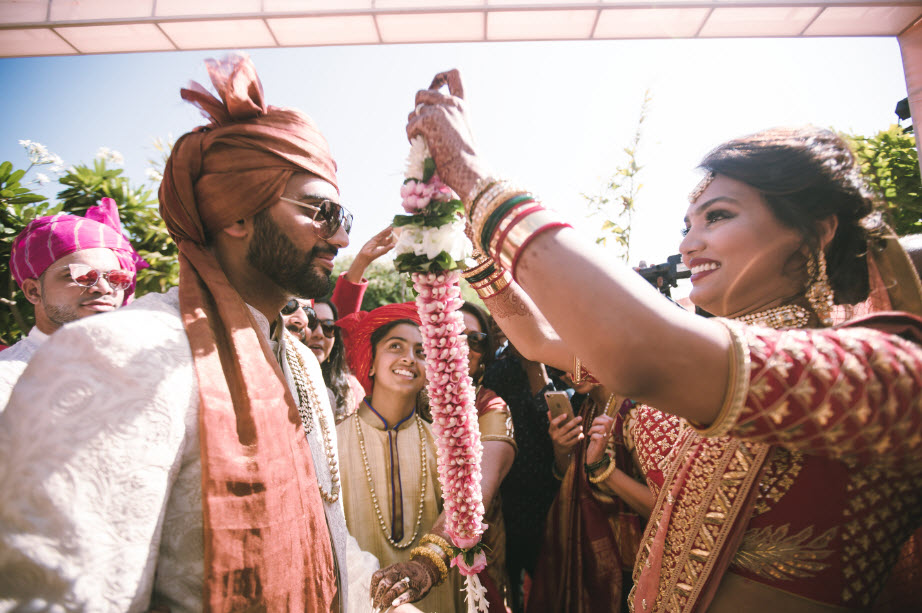 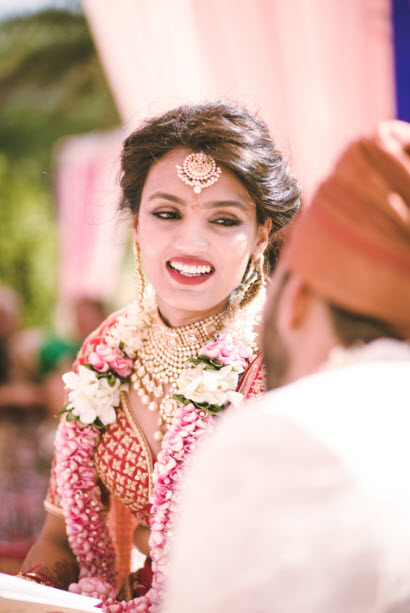 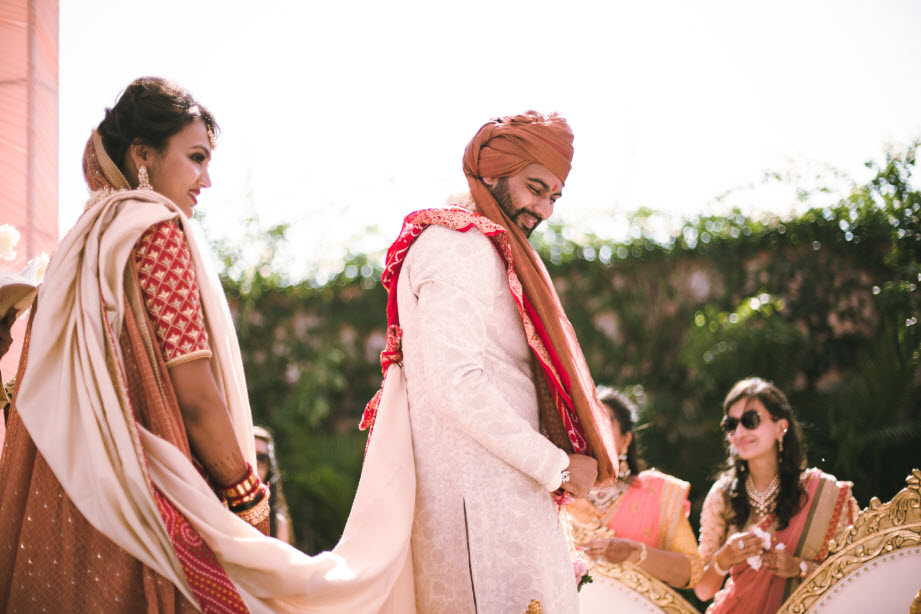 In all, this was one heck of a celebration, which was made grand by the presence of all the loved ones of the couple. Arjun and Anoli had a beautiful wedding, and they created memories to be cherished forever.

NEXT READ: Unseen Wedding Pictures Of 12 Television Celebs Shared By Their Photographers 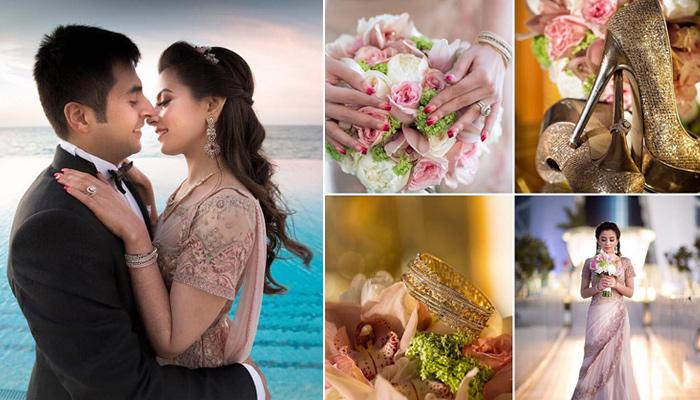 When you find someone to spend the rest of your life with, and your wedding is fixed, obviously, you start imagining the moment when you will finally walk down the aisle, exchange ‘I dos’ and become Mr. and Mrs. officially. Recommended Read: A Million Dollar Fairytale Indian Wedding In Vegas Will