Sometimes, when you expect the least, magic happens to you! There are times when you might feel that you can never click with a person, only to discover years later that you both are a married couple! Love is a beautiful feeling and it will find you when you least expect it. Similar is the relationship-cum-wedding story of one of the most gorgeous couples of the B-town, Soha Ali Khan and Kunal Kemmu. (Do Read: Soha Ali Khan And Kunal Kemmu's Filmy Love Journey Finally Made Them 'Hum Hai Raahi Pyaar Ke')

Do you know, when Soha and Kunal had met each other, they felt that they couldn’t even be friends? In one of their interviews, Soha had shared, “When I first met Kunal, I didn’t even think a friendship was possible between us, let alone being in a relationship.” While Kunal too stated similar views, “I thought of her as this Oxford grad and could never think that we would ever click.” And today (January 25, 2019), Soha and Kunal are celebrating their fourth wedding anniversary!

Soha Ali Khan Wishes Her FIL, Ravi Kemmu On His Birthday, Shares An Unseen Photo Chilling With Him

Soha Ali Khan Gifts Her Daughter, Inaaya A Four-Legged Cutie And It's Not A Puppy, [Pictures Inside] Both Soha and Kunal’s social media handles are beaming with love! Why do we say so? On account of their fourth wedding anniversary, the Dhoondte Reh Jaaoge co-stars posted heartfelt wishes, making soulful promises to each other, embarking this day of forever togetherness. Soha took to Instagram and posted an unseen picture from their wedding and captioned it as, “Four years and a promise of forever @khemster2 it only gets stronger”, Kunal’s heartfelt wish could be read as, “To friendship to love to parenting together. I cherish every step that we take together.. Happy anniversary Sohuuu!!” Here are the two unseen pictures from their wedding shared by Kunal and Soha: 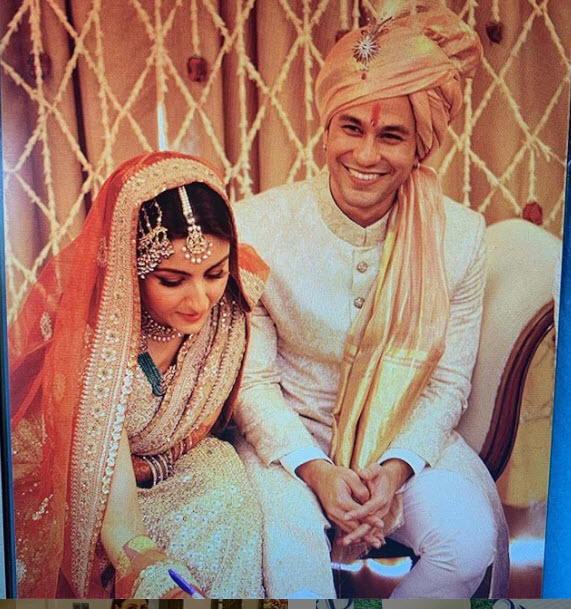 The couple was living-in together for many years until Kunal proposed his muse in a way that every girl dreams of being asked the question that will change her life forever. An all-ecstatic Soha took to Twitter in 2014 and shared the news with all her followers about Kunal popping the ‘big question’ to her and that she said a ‘yes’! This is what her tweet could be read as, “It gives me great happiness to share with you all that Kunal proposed to me in Paris with the most perfect ring in the world and I said yes.” (Must Read: Kapil Sharma And Ginni Chatrath To Host Yet Another Wedding Reception For 'Very Important' People) 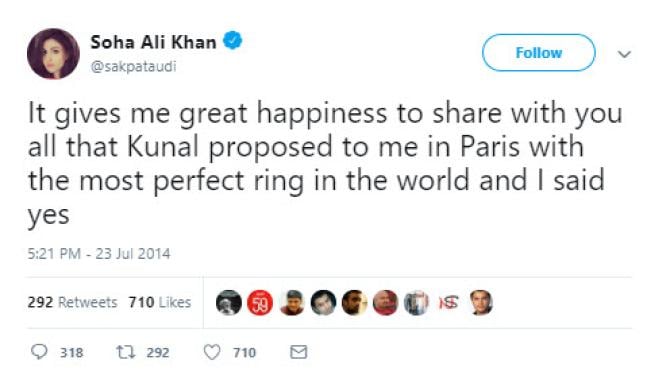 Soha Ali Khan is often regarded as one of the most educated actresses of Bollywood. With a Master’s degree in International Relations from the London School of Economics and Political Science, the ‘real life’ princess got married on January 25, 2015 at a close-knit wedding ceremony. Their wedding took place at the Pataudi’s Khar residence and it was a very simple affair. During the marriage ceremony, only a registrar along with the family members were present. Post their wedding, the newly-weds along with their family members happily posed for the shutterbugs. Here’s a look: 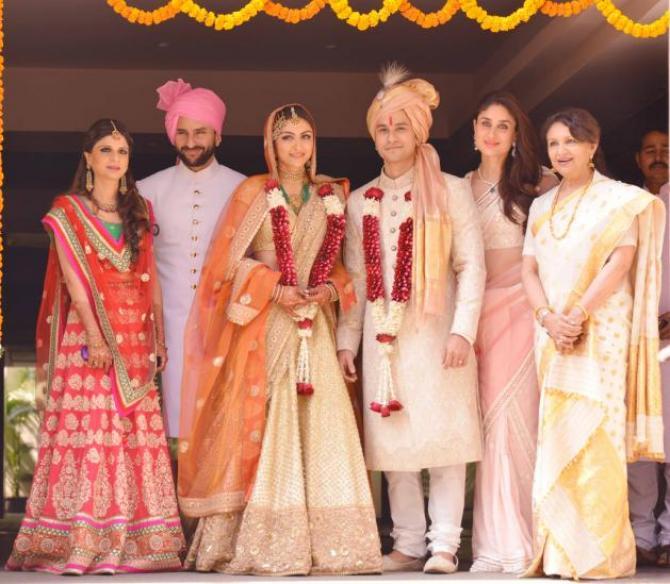 Recently, another unseen picture from Soha-Kunal’s wedding upsurged on the internet. It was an unseen picture of the Pataudi family having the most at their darling princess, Soha’s wedding. In the following image, you will see a complete family picture where Sharmila Tagore, Saif Ali Khan with Kareena Kapoor Khan and Saba Ali Khan are all smiles and happily posing with the newly-weds. However, what's more fun is a goofy Saif posing on the lap of Soha and Kunal! Here is the image: Further speaking about her first impression of Kunal in an interview, Soha had shared, “When we did our first film, Dhoondte Reh Jaaoge, we didn’t speak much at all. I thought we would never be friends, forget being in a relationship. Then we did the film 99 and we got closer. I was immediately attracted to him. I thought he was a very attractive man. I noticed his eyes and his smile. He was quiet, silent and mysterious in many ways. He kind of drew me in." 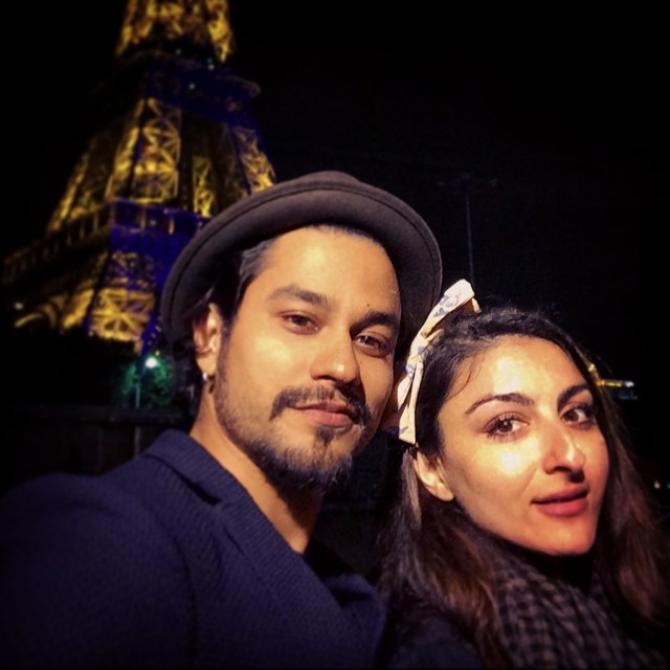 And Kunal too, revealed details about how his first impression of his now muse and had stated, “My first impression was that here is this Oxford graduate and I don't know why she is acting in films. When I met her on the sets, she was writing an article on her laptop to send to Oxford University for their magazine. So I thought, this is serious stuff, I should think before I start a conversation with her. We didn’t speak much. I respected her as a professional. It was only towards the end of Dhoondte... that we happened to spend some time on the sets. It was very interesting because she’s had an upbringing completely different from mine, so the stories of her life were very different — hers were about Oxford and mine were about local trains. But even then, we used to have a lot of healthy debates and that’s how we got talking. Gradually it developed into a relationship." (Also Read: Misha Kapoor Enjoys Playdate On Beach With Isana Kapoor, Mira Kapoor Shares What Baby Zain Was Doing) Kunal and Soha have been blissfully married for over four years and are blessed with a one-and-a-half-year old daughter, Inaaya Naumi Kemmu. What looks like their world revolves around their little grey-eyed princess. Speaking about how life has changed after Inaaya’s birth, the Golmaal 4 actor was quoted as saying, “would like to think so! On other days, I would go back home, put up my feet and watch something on TV or call my friends home, make a plan to go out. Now, I just want to go back home to my baby and watch her. And talk about her. Everything else comes later. Priorities have changed for sure. There’s more to come.” We wish Kunal and Soha a very happy fourth anniversary! Wish you a lifetime of togetherness and love.

Soha Ali Khan Wishes Her FIL, Ravi Kemmu On His Birthday, Shares An Unseen Photo Chilling With Him

Soha Ali Khan Gifts Her Daughter, Inaaya A Four-Legged Cutie And It's Not A Puppy, [Pictures Inside]