Shilpa Shetty Kundra's husband, Raj Kundra is in Mumbai Police’s custody after his arrest on July 19, 2021. He is alleged to be involved in producing pornographic content and publishing them through apps. He is said to be the key conspirator. Since Raj Kundra’s arrest, his family has become the talk of the town and is trolled brutally. This time, Raj’s sister-in-law, Shamita Shetty became a target of the trollers.

Ever since Raj Kundra’s arrest, every other day comes with new advancements regarding the case. From police raiding their house to Raj not cooperating with the investigation team or bribing the police to not arrest him or celebrities like Poonam Pandey and Sherlyn Chopra making startling statements, every new day comes with new stories. In all this, netizens are leaving no chance to voice their opinion or rather troll Shilpa Shetty and her family. 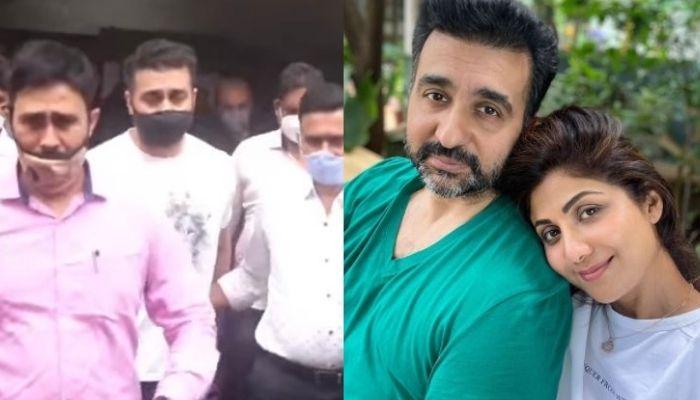 A few hours back, Shilpa Shetty Kundra’s sister, Shamita Shetty was spotted visiting a salon in Mumbai and the paps clicked her. However, her visit to the salon did not go down well with netizens as they started trolling her. From calling her besharm to commenting on how she is unaffected by her jiju, Raj Kundra’s arrest, people started spitting venom.

While some users talked about how she is still concerned about her looks and commented, “Kuch v ho jaye but style me rahne ka,” “They can't miss saloon”, some commented on Raj Kundra’s alleged case, and wrote, “Tere jiju se kaam mangleee woo mst company chalaraaaaaa”, and “Porneshwar jeeju.” One user even ended up calling Shamita and her family besharam as he wrote, “Besharam logh.” 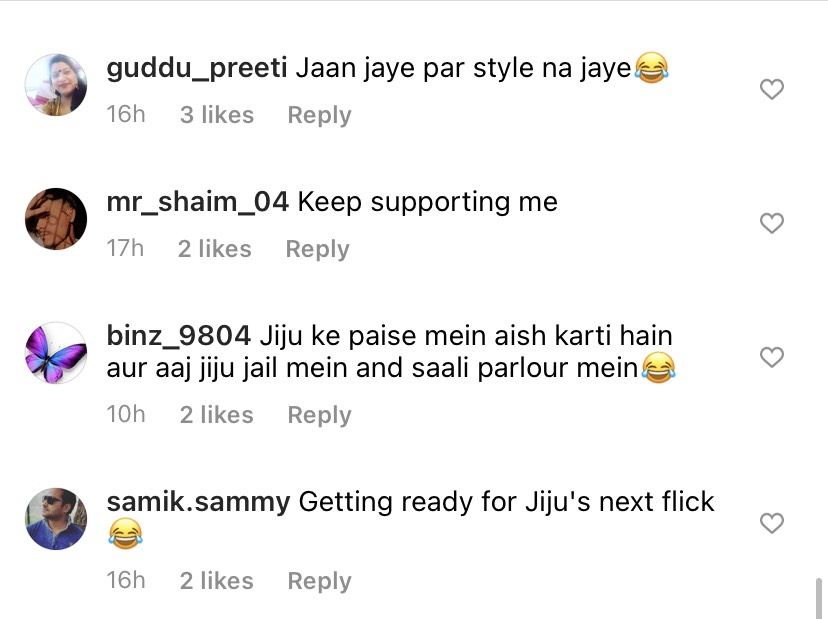 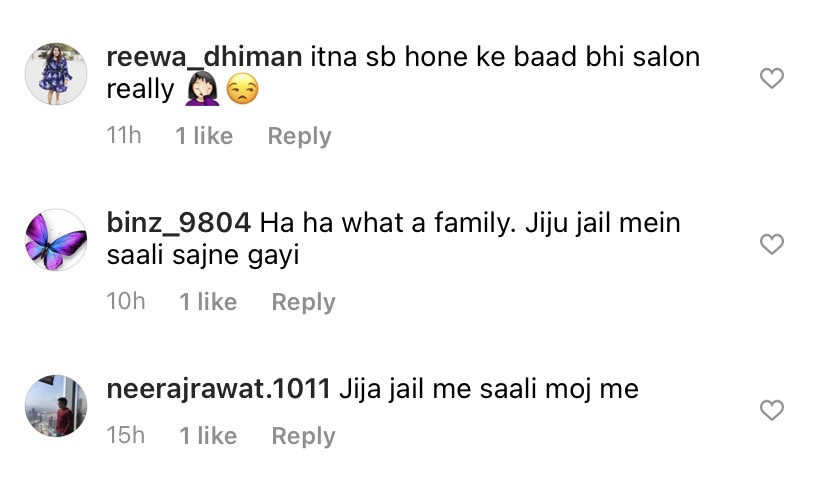 Shamita has been doing her best to stand by her sister, Shilpa's side in these testing times. On July 29, 2021, Shamita had taken to her Instagram handle and had shared a picture of herself. Her cryptic note had caught everyone’s attention. Shamita had directed her note towards a 'You', and people could conclude that it is either for her sister, Shilpa Shetty or brother-in-law, Raj Kundra as they are going through an extremely rough patch. Her note could be read as "Sometimes the strength within you is not a big fiery flame for all to see.. it is just a tiny spark that whispers ever so softy.. "You got this .. keep going ".You can't control how other people receive your energy." Going further in her note, Shamita Shetty had also talked about fighting against the odds till the end, keeping your integrity intact. She had concluded her note as "Anything you say or do gets filtered through the lens of whatever personal issues they are going through at that moment .. which is not about you. Just keep doing your thing with as much integrity and love as possible." After a long halt, Shilpa had reacted to the rumours and accusations by releasing an official statement. It could be read as "My statement. Yes! The past few days have been challenging, on every front. There have been a lot of rumours and accusations. A lot of unwarranted aspersions on me cast by the media and (not so) well wishers as well. A lot of trolling/questions posed… not only to me but also to my family. MY STAND… I HAVE NOT COMMENTED YET, and will continue to refrain from doing so on this case as it is subjudice, so please stop attributing false quotes on my behalf." 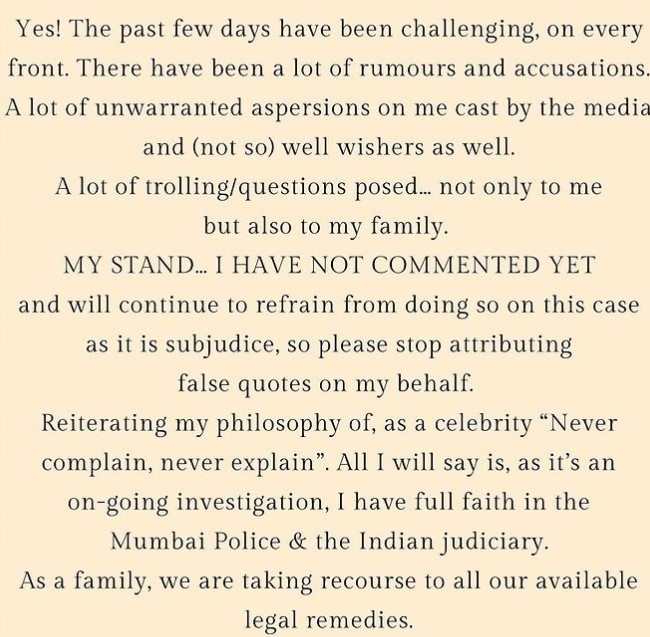 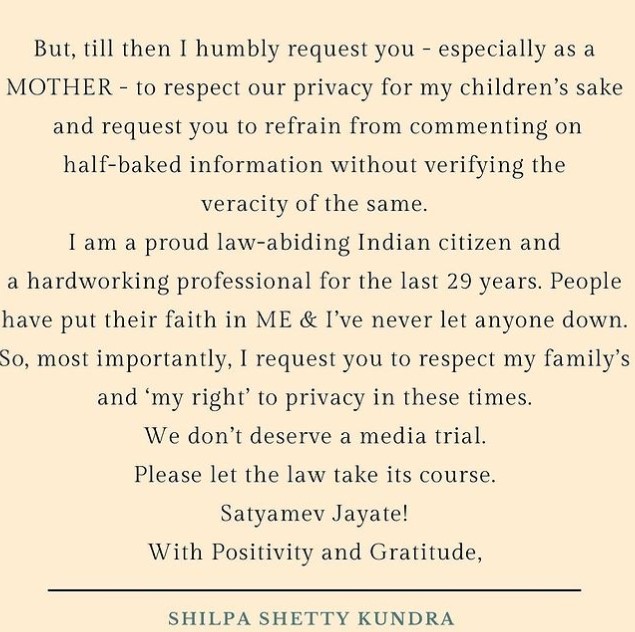 Raj Kundra has been booked under sections 420 (cheating), 34 (common intention), 292 and 293 (related to obscene and indecent advertisements and displays). 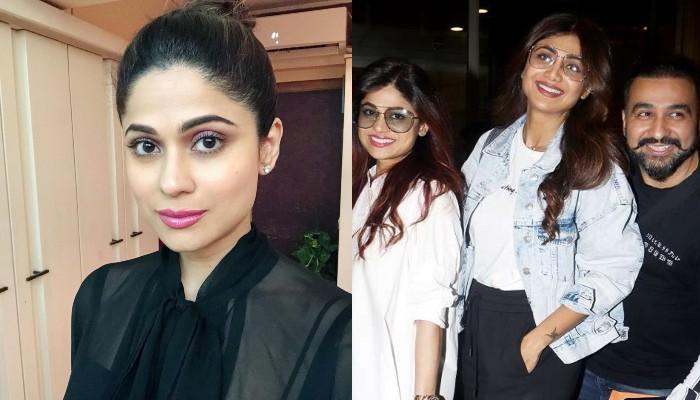