AbRam Khan celebrated his sixth birthday on May 27, 2019. Here's a full family picture in which we can spot Shehnaz Lalarukh Khan, Shah Rukh's sister, making a rare appearance.

Shah Rukh Khan- a name that rings of stardom after intense hard work and struggle, is a complete family man. Even if you aren't his fan, you know it, one way or the other. Be it a loving and caring husband to his wife, Gauri Khan, or a doting father to Aryan Khan, Suhana Khan and AbRam Khan, Shah Rukh Khan is a charmer in every sense. And SRK is definitely the gold standard of #familyman. (Also Checkout: Aryan Khan's Pictures With Girls Prove That He Is A Ladies' Man, Just Like Dad, Shah Rukh Khan)

Shah Rukh Khan's family is what we all aspire to be one day, right? His little munchkin, AbRam Khan celebrated his birthday recently on May 27, 2019. For the uninitiated ones, it must be mentioned here that AbRam was born through surrogacy and he turned six a few days ago. And obviously, Shah Rukh and Gauri didn't leave a stone unturned to make it the most memorable birthday for AbRam. Shah Rukh Khan and Gauri Khan organised a Marvel-themed party on AbRam Khan's sixth birthday. The pictures from the same went viral on social media and today, we have got hold of another picture in which we can spot the entire family with Shah Rukh Khan's wife- Gauri Khan, their children- Aryan, Suhana and AbRam and Shah Rukh's sister. While the birthday boy, AbRam is cutting the cake, Gauri Khan is feeding it to Shah Rukh Khan. (Also checkout: SRK's Daughter Suhana's 'Mehendi Laga Ke Rakhana' Charm At A Family Wedding Is Going Viral) Shah Rukh regularly posts pictures with AbRam Khan on his Instagram handle. For instance, he had shared the following picture and had captioned it as, "The little one was a bit confused between ‘Boating’ and Voting, so took him along to experience the difference." 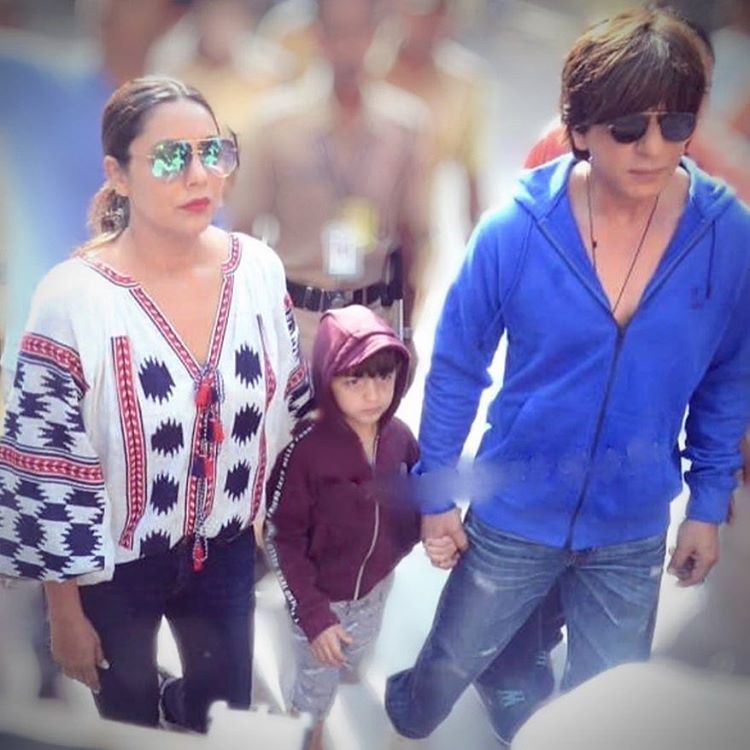 Another adorable dad-son moment was in the following picture, which Shah Rukh beautifully worded as, "You never really understand your personality, unless you have a Mini-Me who acts the same way." (Also Checkout: Suhana Khan Turns 18, Here Are 7 Dating Rules By Daddy Shah Rukh Khan For The Guy Who Will Date Her) 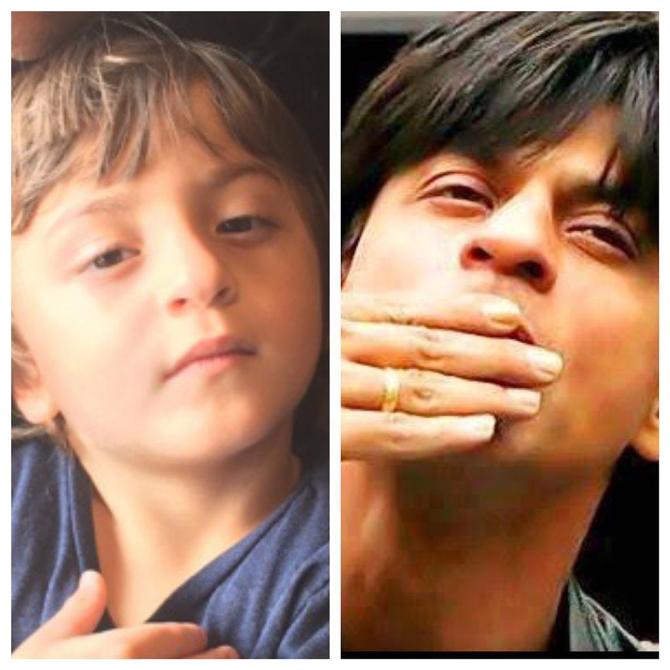 Shah Rukh Khan and AbRam Khan's most chill-moment was the following which SRK reasoned out as, "Weekend Research: “A survey has found One in Three men are just as lazy as the other Two”. We are the other two and we don’t agree with mom!" In an interview earlier with a leading daily, Gauri Khan had shared that Shah Rukh Khan pampers AbRam Khan more than Aryan and Suhana Khan. She was quoted as saying, “I think he is pampered much more than Aryan and Suhana. He is more on sets with Shah Rukh too. My other kids didn't do that. I am now wondering, why." (Must Read: Rishi Kapoor Completes 8 Months Of Cancer Treatment In New York, Tweets An Emotional Post) Talking about AbRam, Shah Rukh Khan had mentioned in an interview, “He is very sweet, beautiful and pretty looking. He is a pleasant child. He brings a lot of cheer and happiness. It is great fun to be with him. Everyone wants to be with him. There is so much innocence and love in the baby, He is very sweet. The kids like him I like him.” Shah Rukh had revealed during a media interaction that he loves to spend time with AbRam. He was quoted as saying, “I have no other interest in life. People find it very strange. There's only one interest high up in life... that is to play with children. I love kids, and not in the nice, pat-sy way; I just love kids. I like being around them, and I have three of them. I've really had some amazing times with them. I'd rather be with my children than be anyplace else. That's the only thing I'd rather do more than acting.” (Don't Miss: Shah Rukh Khan Calls Daughter Suhana Khan 'Sanwli', Faces Backlash, But Here's The Truth) 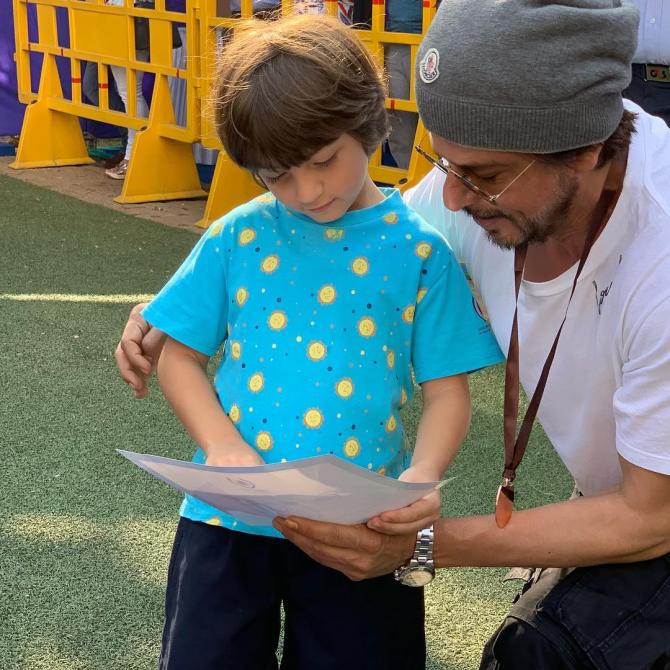 In another interview, King Khan had shared, “AbRam is my little monster. I must add that AbRam is extremely protective of me. There are times he watches somebody hit me on screen and he thinks it’s for real. So, the next time he meets them, he gives them dirty looks. He did that with Kajol after Dilwale because of that one scene during the interval. We even went for that Ra. One ride together in Dubai and he was getting little angry with Nawaz bhai after seeing Raees. Otherwise, he’s a total chiller." Talking further about his little munchkin, Shah Rukh had said, "He’s a smart, intelligent kid and extremely fun to be with. And with him, I become a kid myself.” 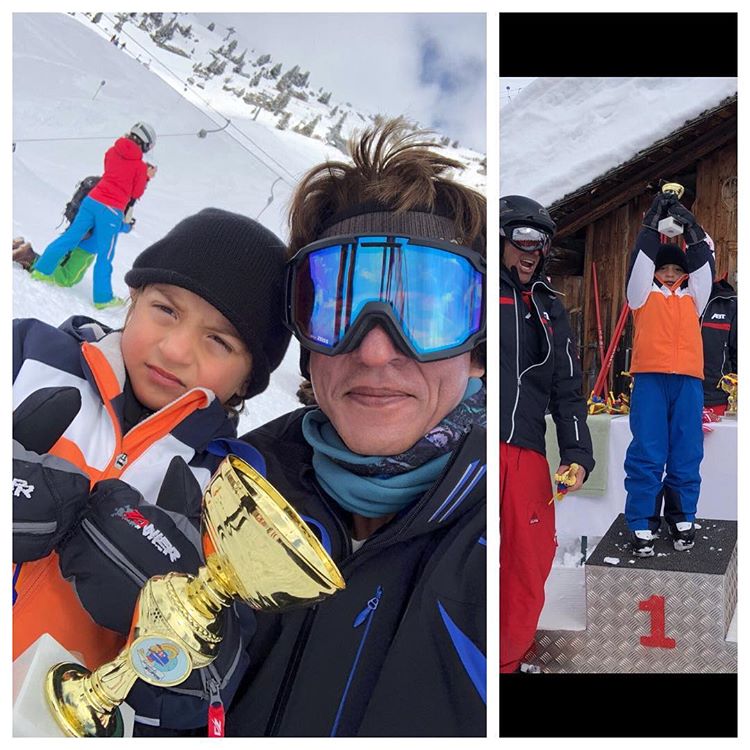 Shah Rukh Khan also has a lot of clarity in his mind when it comes to children. For instance, he had shared recently, “I’m not very inquisitive or gossip about people’s lives, including my children’s. If they want something, they will just give me a call. Sometimes, they talk about their personal lives, but I know they limit what they tell me. It’s about aankh ki sharam. I don’t pry too deeply. I see the mom (Gauri) and the kids talking, and she asks some really pointed questions, and I’m like, ‘How can you ask them this?’ They may answer or say, ‘I don’t want to tell you’." (Don't Miss: Chhavi Mittal’s Emotional Post For All Mothers Is Very Motivating And Inspiring, Check Inside)

How did you like Shah Rukh Khan's family picture from AbRam Khan's sixth birthday celebrations? Share your views!