Sameera Reddy shared her experience of dealing with fat-shaming, gaining 105 kilos and post-partum blues. She revealed that she had felt ‘completely disconnected’ from Hans Varde for a week. Thanks to the advent of social media and various platforms that the celebrities and influencers are discussing the topics which are considered as a taboo in the society. Creating awareness and breaking the stereotypes, we can’t thank enough the celebrities and influencers, who are putting the platforms to such great use. Be it Deepika Padukone addressing mental health, Sara Ali Khan speaking of her battle with PCOD or Esha Deol, Deepika Singh, Chahatt Khanna, Surveen Chawla, Mandira Bedi, Shveta Salve and other mommies raising awareness about postpartum depression, hats off to the ladies for taking a step towards making a positive change in the society. (Also Read: Kapil Sharma's Wife Ginni Chatrath Flaunts Post-Pregnancy Look At 'Baaghi 3' Premier, Looks Gorgeous)

While Maine Dil Tujhko Diya fame, Sameera Reddy had already poured her heart out on facing post-partum depression after giving birth to her first child, Hans Varde, she once again speaks about how she now doesn’t believe in ‘fake it till you make it’ anymore. Sameera and her hubby, Akshai Varde became parents for the first time when their little ninja, Hans Varde was born to them on May 24, 2015. Theirs is a beautiful family of three was completed on July 12, 2019, with the arrival of a little angel, Nyra Varde. Sameera keeps on inspiring mommies-to-be and newbie mothers with her motivational posts and experiences through interviews and social media handle. And March 2, 2020, was no different! 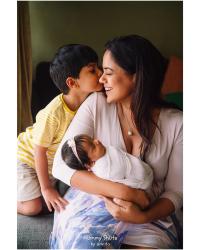 At KSP (Kidsstoppress) Awards 2019, Sameera Reddy spoke about her campaign #ImperfectlyPerfect and how she was body-shamed as a child and how she was the 'IT girl' when she was an actress. Sharing her experience of dealing with fat-shaming, gaining 105 kilos, post-partum blues and why is it so important for her to address this issue of painting a realistic picture of what pregnancy and post-pregnancy feel like to all the women out there, Sameera made everyone teary-eyed with her experience. Sameera even went on to reveal that after giving birth to her firstborn, Hans Varde, she had felt ‘completely disconnected’ and had given the little one to her husband, Akshai Varde to hold him.

How it took her a week to understand what’s going on and that she could not bring herself to hold the baby after he was born, Sameera Reddy stated, “When Hans came, I felt completely disconnected. I didn’t know who he was. I gave him to my husband and said, ‘I just don’t feel good about this. Please take him.’ It was the worst thing I did and I hope today I can make up for it. It took me a week to understand what was going on.” 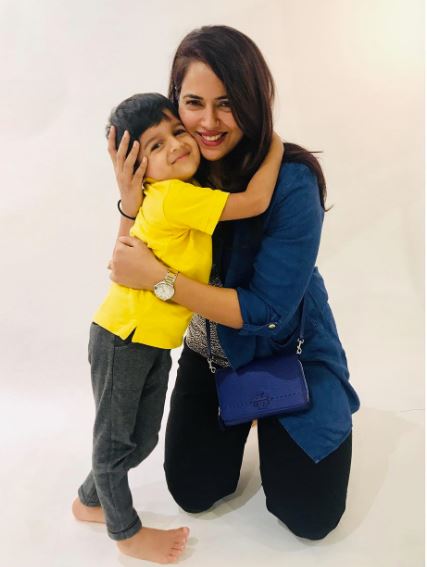 Expressing grievance over why no one ever introduced her to the reality of pregnancy and told her that her hormones can go for a toss, post-pregnancy weight gain or post-partum, Sameera Reddy continued, “I went from 72 kgs to 105 kgs. And when I gave birth, I was depressed as hell. I had a C-section. I didn’t know what was happening…I was very disillusioned when I gave birth. My husband kept telling me I was beautiful. I said, ‘Thank you, but obviously, you are lying.’ I was disillusioned to the point where I was disconnected. Nobody spoke to me about this. That is the reason I am talking today. Nobody told me, ‘Sameera it could go wrong’, ‘Your hormones could go for a toss’, ‘You could have something called post-partum depression’.” (Also Read: Mahhi Vij's Shares How Her Daughter, Tara Does 'Tata' To Her Daddy, Jay Bhanushali) Throwing light on what she was going through then, Sameera Reddy shared, “I had so much self-loathing. I would look at the mirror and ask, ‘What happened to Sameera Reddy?’ Because everybody reminded me of what I was. It made things worse. I had women judging me.” Later, she decided to be pregnant again and convinced herself to enjoy the process and herself. She remarked, “I can’t be a ‘fake it till you make it’ girl anymore. Let’s all support each other. Support don’t judge and most importantly I say this, women are freaking amazing. Pat yourself in the back. Do not look at the mirror and loathe yourself.” 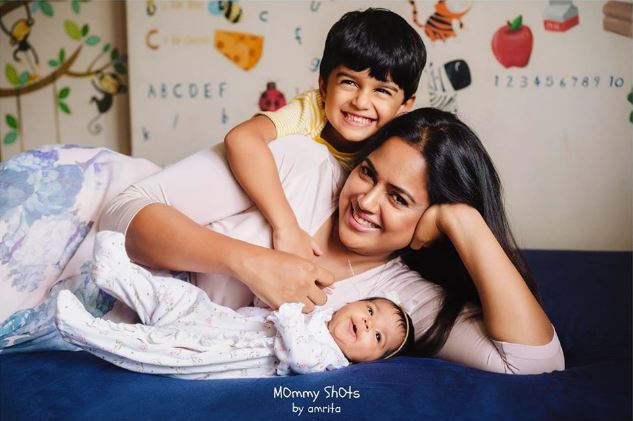 Sameera Reddy had posted pictures from her second pregnancy phase and the pregnancy glow on her face was completely evident. The pre-pregnancy and post-pregnancy weight gain of a woman is a natural process, but women, especially stars are often fat-shamed for the same. Sharing a before and after picture of herself a few months back, Sameera had written, “I touched 102 Kgs in May 2015, the month Hans was born and I’m not scared to admit it. It took me to the deepest darkest places in my head. My confidence shattered. And I couldn’t lose the weight for a year after because I was too scared to even step out. I disappeared because I didn’t have the strength to be judged by the world after all the years of being glam and fit on screen. But the beautiful part is that you can only hit your lowest low to know you can absolutely climb out of that hole. It’s a fight. A hard one.” 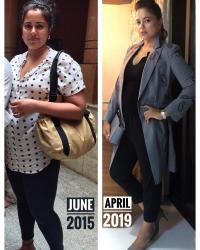 Sameera Reddy’s post could be further read as “Took me 2 years more to lose the weight and to step out and face the world again but I wish I had the courage then. I did it naturally with no fad diets, no easy way out. Only with dedicated workout, yoga, pilates and strength training. It’s important for me to post this now because I need women to know the struggle is real. The mood swings, hormonal changes and losing your body shape can mess with your mind. It’s a superficial world and people can be hurtful if you don’t keep up. But the key is to be fearless. Only you can get out of that rut. It’s yours to change. Be brave. You can move mountains if you just will it. Special thanks to the best workout crew who also gave me the physical & emotional strength to get fit again @yogabypramila @adishroff @ivan_ultimatefitness @nyelakapadia & Kaizen Motafram my Pilates guru! love you guys.” She complemented her post witj an array of hastags like “#bollywood #mom #keepingitreal #weightlosstransformation #fattofit #pilates #postpregnancy #yoga #bodytransformation #fitness #fitnessmotivation #weightlossjourney #pregnancy #fitness.” (Also Read: Ankita Bhargava Creates An Everlasting Memory Of Daughter Mehr, Frames Her Hands And Foot Impression) 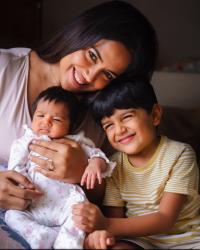 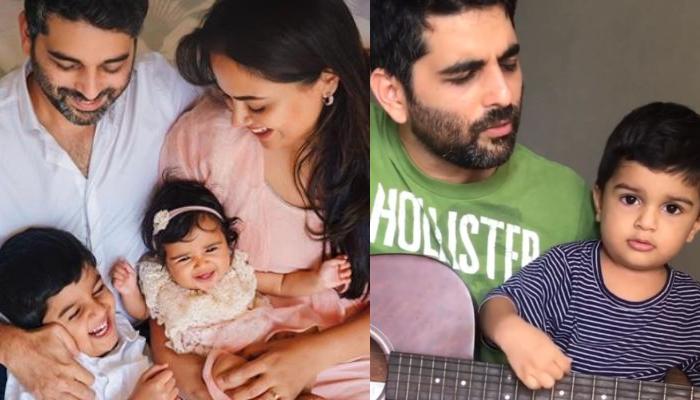 Bollywood actress, Sameera Reddy had gotten married to an entrepreneur, Akshai Varde on January 21, 2014, in a traditional Maharashtrian wedding. Soon, the couple had embraced parenthood for the first time on May 14, 2015, when Sameera had welcomed their baby boy, Hans Varde. On July 12, 2019, Sameera had become