Sambhavna Seth Vlogged Sidharth Shukla's death, leading to bashing from his fans and celebrities. Th actress defended her action with a series of tweets!

Sidharth Shukla’s life wasn’t long but it was big for sure. In his lifespan of 40 years, he had seen success and immense love. His death due to a massive heart attack on September 2, 2021, had come as a shock to his family, fans, friends and the entire nation. The nation is still mourning his loss. From the media’s disastrous role in covering his death and funeral to now, Sambhavna Seth justifying her Vlog on his death, many controversies around his death have started pouring up.

Sidharth Shukla’s last rites were performed at Mumbai’s Oshiwara crematorium, and his alleged girlfriend, Shehnaaz Gill, and his mother, Rita Shukla’s condition had broken our hearts. While people were teary-eyed, his friend, Sambhavna Seth and her husband, Avinash Dwivedi had also visited the crematorium to pay their last respects. In the hustle-bustle of the crowd, Sambhavna and her husband, Avinash had ended up fighting with the cops as they had stopped them at the venue. When a cop had pushed Avinash, Sambhavna got into a verbal fight with him.

Also Read: Mohit Raina Talks About His Breakup With 'Naagin' Actress, Mouni Roy And How Media Had Covered It

After Sidharth’s death, many celebrities had slammed people for Vlogging his demise to make money out of it. Sambhavna Seth also owns a YouTube channel and Vlogged his demise. After facing the backlash, she defended her action with a series of tweets. Stating that Sidharth’s fan have the right to know what’s happening inside, she said, "We being celebs were concerned as fans too want to know about @itsSSR family and friends at his funeral.. Same way @sidharth_shukla fans were also glued with tv sets to know what his family and friends are going through. They have all the right to know what is happening inside."

In her next tweet, Sambhavna mentioned that it is no crime to give his fans general insights. She mentioned, “Giving a general insight to his fans through media or social media is not a crime unless you are leaking inside video or pictures. Which i didn't. Those who are becoming over smart with their tweets were also scrolling their social media feeds to know what was happening there.”

Sambhavna, in her next tweet, mentioned that Vlogging is her job and she didn’t even share a single inside video or picture. She tweeted, “And those blaming me for making a vlog of it, first of all go and watch my full vlog keeping your jealousy aside. I didn't show even a single pic or video from there. Like your daily job is blaming. Mine is vlogging the same as acting/dancing."

Justifying her act, Sambhavna’s next tweet read, "Because I find it better to capture my unfiltered feelings myself and post it on my youtube channel than paying paparazzis like others to follow me at gym, shopping malls and funerals. I am my own representer dear chaps & chicks. So chill."

We wish Sidharth Shukla has found peace, wherever he is now!

Next Read: Addite Malik Shares A Photo With Son, Ekbir From The Hospital, When She Held Him For The First Time 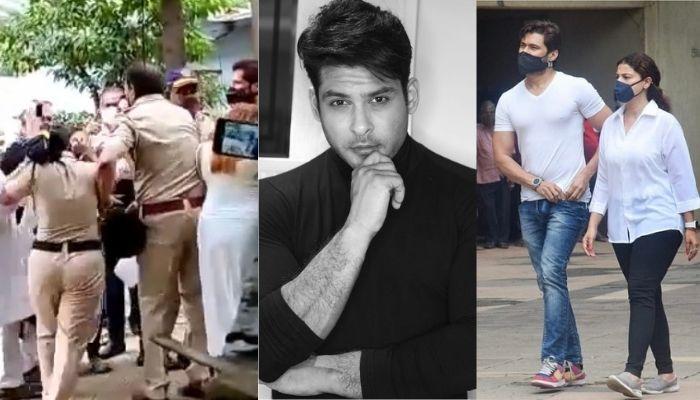 Sidharth Shukla, who had started his career in the glamour world with modelling and had gone on to become one of the most loved actors of Telly world, left for the heavenly abode on September 2, 2021. At the mere age of 40, the actor succumbed to a massive heart