Saif Ali Khan will be seen next in the movie, 'Jawaani Jaaneman' playing a 40-year-old bachelor. Recently, Saif revealed that he asked his daughter, Sara, to not work with him in his movie.

Affectionate, considerate, mannerism, and elegance run in the blood of the Pataudis. Be it the Nawab of Pataudi, Saif Ali Khan, his Begum, Kareena Kapoor Khan or his kids, Sara Ali Khan, Ibrahim Ali Khan and Taimur Ali Khan, they all speak volumes about the royalty that they posses. We have time and again seen Saif handling the paps gathered around his house with utmost calm and composer and his kids have imbibed the same qualities from him. Saif’s elder son, Ibrahim prefers to stay away from the media glares, and we have seen him dozing the media personals by either hiding his face or running away from them, but we have never seen him losing his calm on them. So is the case with his sister, Sara, who beautifully understands the pros and cons that stardom brings along with itself. (Recommended Read: Shah Rukh Khan Reveals A Life Lesson To Riteish Deshmukh That He Learnt From His Son, AbRam Khan)

Saif Ali Khan is known to one of the most sensible and passionate actors in Bollywood and like his wife, Kareena had once said, he is ageing like a good old wine. At the age of 49, Saif can give tough competition to any millennial. Saif will be seen playing the role of a 40 years old bachelor, who runs away from his duties and doesn’t like taking responsibilities in the movie, Jawaani Jaaneman along with debutant, Alaya F. Saif’s daughter, Sara Ali Khan had made her Bollywood debut with the movie, Kedarnath and ever since then there is no looking back for the lady as she is on the path of becoming one of the best actresses of her time. Do you know, before her debut movie, Kedarnath, Sara was offered the role of Saif’s on-screen daughter that Alaya will be playing in the movie, Jawaani Jaaneman? 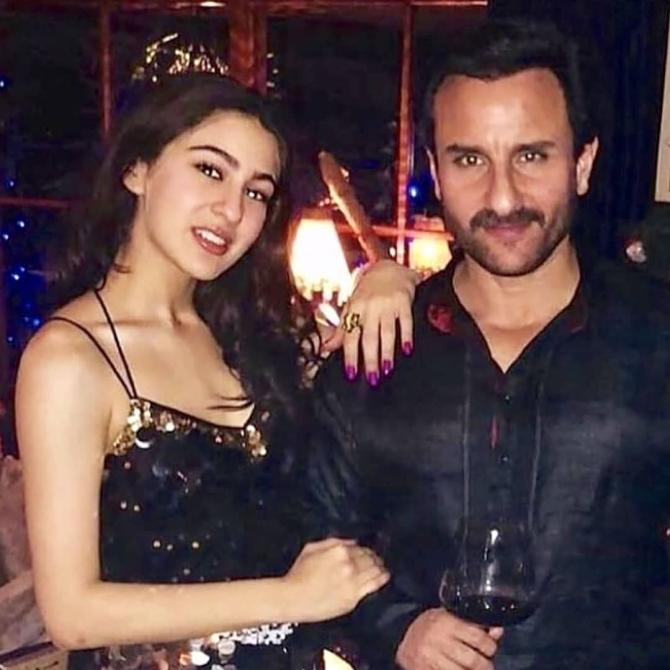 In an interview with Pinkvilla, Saif Ali Khan revealed that he initially offered the role of his on-screen daughter to Sara Ali Khan. The filmmakers had planned the movie with Saif and Sara, confirming the same, Saif said, “Yes, what had happened was that Kedarnath had almost been shelved and Sara didn't have another movie. So, this film was around and being the knight in shining armour and a good daddy, I asked her if she would like to do this. She had said yes." 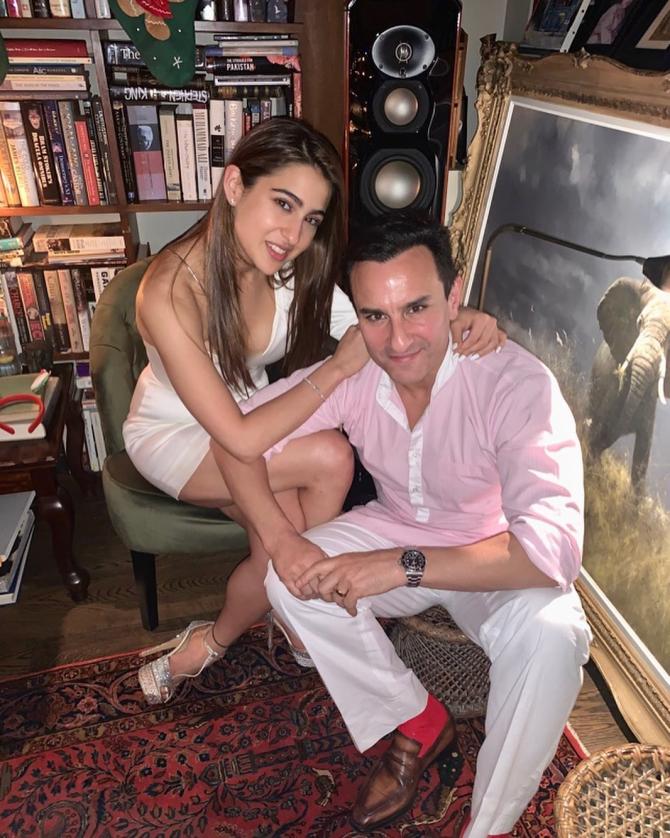 Saif added further that he had asked Sara to not do the movie and revealed, “Kedarnath came back on track and then, Simmba also fell in place. I only told her then that listen, Sara, don't do this film. This was a backup for you. I think I could have done it with someone else, but she should be working with Ranveer Singh and Varun Dhawan next. She said she would like to do that. I wouldn't want her to do a film just because it's me. It gets really complicated when it's about family." Saif and Sara have been offered many movies together, but the duo is looking for something interesting. Saif added, “We have got at least three to five movie offers together. Sometimes, she didn't like the script, sometimes, I felt I am not interested." (Suggested Read: Shahid Kapoor Is Awestruck As His Wife, Mira Rajput Kapoor 'Let's Her Laugh, Celebrate Her Heart') Sara Ali Khan will be seen playing the role of Zoe in the movie, Love Aaj Kal which is the sequel of her daddy’s movie with the same title. In an interview with the Mumbai Mirror, Saif Ali Khan had commented on the same and said that it is a great achievement, but he doesn't know how to feel about it. He had shared that even he could have acted in the sequel as he just did the remix of his song, Ole Ole for Jawaani Jaaneman. He had also wished his daughter, Sara, luck and had concluded on the note that time is flying fast. 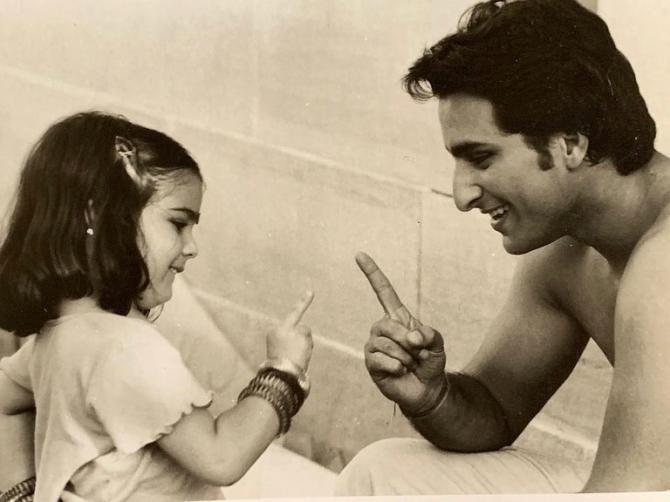 In an interview with the Mid-Day, Sara Ali Khan had shared that her daddy, Saif doesn't like discussing films with her and had stated, "He looks at me like I'm a traitor for discussing films. He lives with Kareena [Kapoor], is a brother to Soha, and is an actor's son. So, now, if I discuss work, he's like, 'Please don't do this to me.' So, we don't talk about films often. We talk about history, argue about what Hitler's motivations were, or who was wrong in the Cold War. Sometimes, we discuss religion and how different beliefs and social systems came about. We both enjoy culture, travelling, good food, and great conversations." 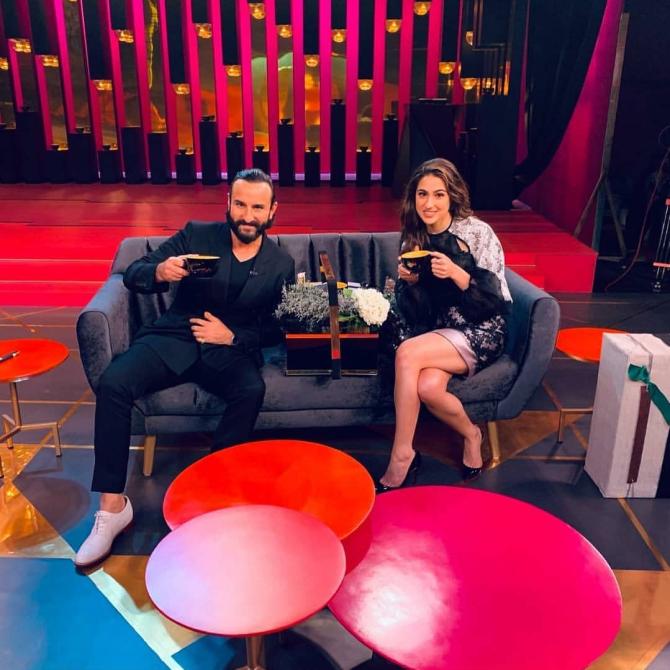 Saif Ali Khan also equally appreciates his daughter, Sara Ali Khan’s achievements and in an interview with Pinkvilla, Saif had shared that he was proud of her.  He had stated, "I’m so happy for her. This was her choice all the way. She chose this and made it happen. And I thought she was brilliant. A thinking actress who is expressive and inventive in every shot. I see a fantastic future for her. She is used to being good at what she loves, but I thank the people for welcoming her and giving her the acceptance that an actor needs." (Must Read: Ranbir Kapoor And Alia Bhatt Planned A Get-Together For Neetu Kapoor-Rishi Kapoor's 40th Anniversary) 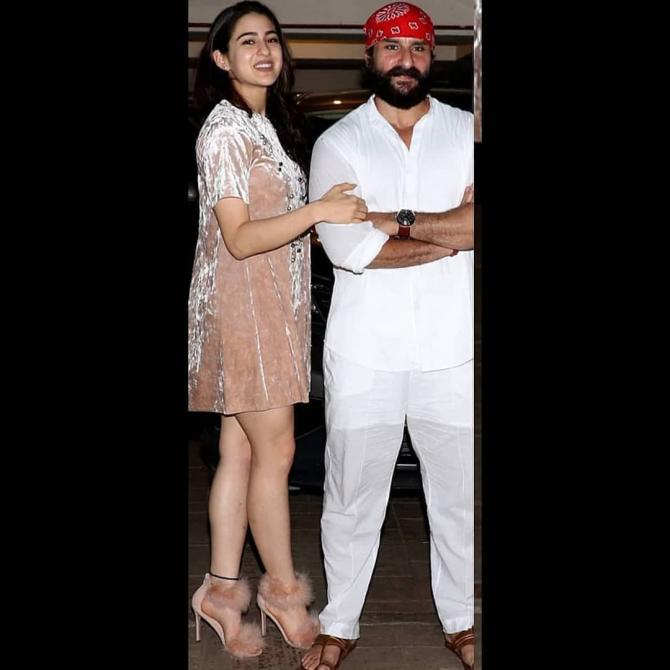 We can’t wait for Saif Ali Khan’s upcoming movie, Jawaani Jaaneman. What about you?