In an interview, Pooja Banerjee talks about what keeps her marriage alive with her husband, Sandeep Sejwal. Check out the details inside!

Pooja Banerjee has become a fashion icon with her portrayal of Nibedita Basu in a popular daily soap, Kasautii Zindagii Kay. With those stunningly draped sarees to her exotic jewellery and makeup, she has given major saree draping inspirations to all the millennials. Starting of her career with MTV’s reality show, Roadies 8, Pooja has come a long way, professionally and personally. (Also Read: Apurva Agnihotri Talks About His Married Life With Shilpa Saklani, Says Must Have Done Good Deeds)

The 28-year-old actress, Pooja had found solace in her childhood friend and national-level swimmer, Sandeep Sejwal. The lovebirds had walked down the aisle on February 28, 2017, and since then they are giving us couple goals. In a recent interview with the Hindustan Times, Pooja had opened up about living her happily ever after with Sandeep Sejwal and had said, “We both have understood each other very well. There is no compulsion that I have to take care of him. When there is no compulsion, it is always a better and more beautiful relationship. Sandeep himself is a very responsible person and takes care of the basic household chores, which make it a beautiful place to coexist. I don’t have to run behind him and take care of him. I care for him because of my love.” Recently, in a conversation with SpotboyE, Pooja Banerjee talked about what keeps her relationship with husband, Sandeep Sejwal alive and fresh. She said, "I personally feel that in my and Sandeep's case as well, there is so much of love only because we were good friends initially. I knew him since I was in class 4th. And we had the longest friendship after which we realised we can be life partners. You won't believe it but till date we haven't proposed to each other. Because we know in our case there is no need of confirmation, label or a tag. We have conquered each other." She further talked about complications in a relationship and what keeps any relationship going. She said, "If you are staying with a person under the same roof, there are many differences which are bound to happen. So, the only way to keep your relationship safe from everything is to have friendship as its base. Trust, love, attraction- all of these come secondary- if there is friendship between the couple they tend to share and understand things.” 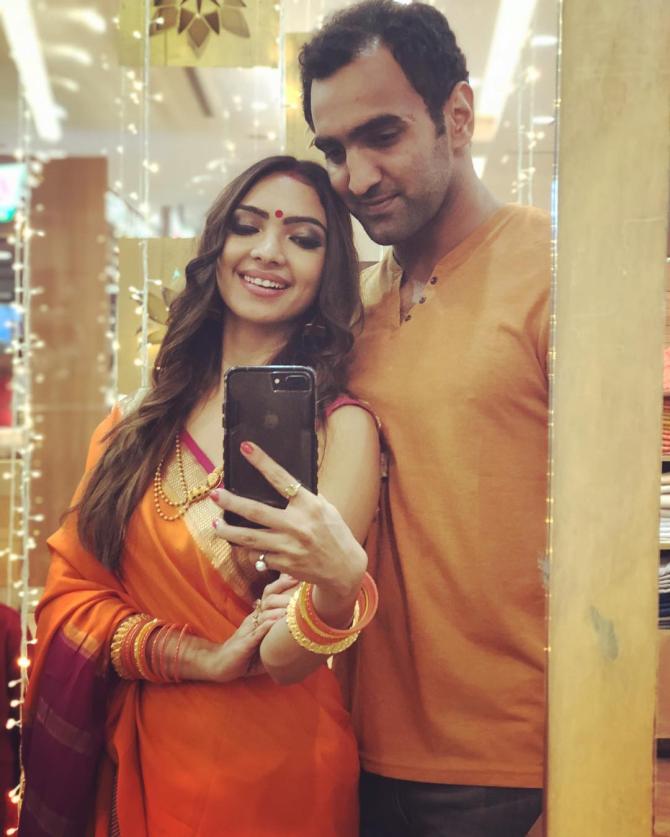 She added that she believes in the concept of Pyaar Dosti Hai. She said, “Even if a person makes a mistake, the other one will be there to hear him/her out and not jump to any conclusion. In fact, the reason why most people are falling out of love nowadays is because they started looking for love desperately and forget to be friends from where they started. I truly believe in the concept of 'Pyaar Dosti Hai'- which we saw in Karan Johar's film, Kuch Kuch Hota Hai." In an interview with The Times of India, Pooja had talked about dating and marrying a sportsman and the responsibility that comes with it. She had said, “Dating and marrying a sportsman is literally being out there all the time. Because you need to give him a lot of time, patience and let him be at mental peace. He is playing for our nation that I understand and I know that nation is his first love. So, as a matter of fact, I know that swimming is his first love not me.” (Recommended Read: Kartik Aaryan's Family Trolls Him As He Tries Gulabo Sitabo's Tongue Twister Challenge [Watch Video])

She had further added, “Being a swimmer myself I understand his passion, but there were times when the girlfriend and now the wife in me would react but then I used to tell myself that his priority towards swimming is main, I have to give him that space and time so he can put all his energy in swimming.” (Don't Miss: Anita Hassanandani And Rohit Reddy Pen Eulogies On His Father's Demise, Express The Unsaid Feelings) Do you also believe in the concept of Pyaar Dosti Hai?