Kajol's daughter, Nysa Devgan donned an off-shoulder dress for a party, which looked inspired by one of her mom's outfits which she had donned in 2017.

Nysa Devgan holds a huge fan following at the mere age of 18, just like her star parents, Kajol and Ajay Devgn. Though her IG handle is private, Nysa has many fan pages, which dig out into her personal life and give us some inside scoop. Kajol and Ajay had embraced parenthood for the first time in 2003 with the birth of their daughter, Nysa. And now, she is a grown-up, completing her studies at a university in Singapore.

Nysa holds an uncanny resemblance with her mother, Kajol and her fondness for her mommy is evident on various occasions. For instance, a few months back, Nysa Devgan’s video had gone viral on the internet, where she was seen dancing to her mom, Kajol's songs. She had danced her heart out to the hit tracks from her superstar mom's movies, starting from Kabhi Khushi Kabhie Gham's song, Bole Chudiyan, to Tere Naina and Sajda from the film, My Name Is Khan. After watching Nysa’s performance on-stage, it was evident that she is a star in the making and had made her mom proud of her.

As Nysa has many fan pages, an account dug out a mirror selfie of the star kid and compared it with her mommy, Kajol’s picture. In the photo, Nysa can be seen wearing a black off-shoulder wrap dress with an asymmetrical hem and a front slit. Keeping her look simple, she accessorised it with a gold chain and a lime green bag. On the other hand, in 2017, Kajol had donned a similar looking black off-shoulder dress. Check out the pictures below! On October 22, 2021, Dilwale Dulhania Le Jayenge actress, Kajol had dropped a picture with her daughter, Nysa Devgan, on her Instagram handle. In the photo, the mommy-daughter duo had twinned in white. Though Nysa has got a calm and composed nature from her father, Ajay Devgn. However, in the picture, she was seen looking like an exact reflection of her mother. Along with the picture, Kajol had written: 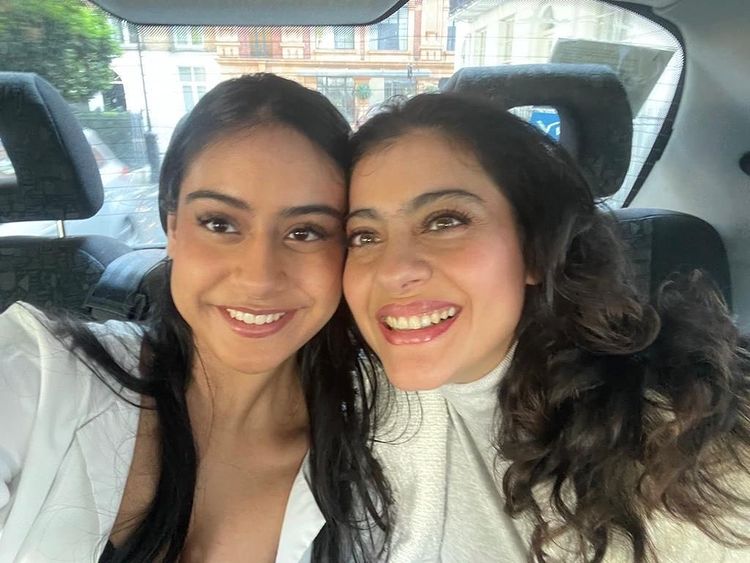 On Nysa's 18th birthday, i.e., on April 20, 2021, Kajol had posted a throwback picture on her IG handle. Along with the photo, Kajol had expressed her experience of embracing motherhood for the first time. She had penned down how nervous she was during Nysa's birth and had written:

"I was so nervous when u were born. It was the biggest exam of my life and I had all those fears and feelings that go with it for a whole year at least.'' Going further in her note, Kajol had wished happy adulthood to Nysa and had added:

''Then u turned 10 and I realised I was a teacher just part of the time most of the times I was a student learning new ways to do things and look at them. And now we come to today and I can finally say I passed with flying colours. U are what we all say women should be so fly high my darling and don’t tone down ur shine for anyone. I’ve got ur back! Happy adulthood. You have the tools so use your powers for good." For the unversed, Nysa Devgan is studying at United World College of South East Asia in Singapore. It is rightly said that God couldn't be everywhere so he created moms. Right from the moment her daughter is placed in her arms, her little one snuggles into her heart like no one else. Remember how your mother used to go teary-eyed when you used to fall in your childhood? Or