Neha Kakkar and Rohanpreet Singh hosted a grand reception, and it was a star-studded affair. Scroll down to check out pictures and videos from the same!

Celebrity weddings in India are more like fashion quest for the fans. From getting inspired from different looks of their favourite celebrity's different wedding functions to following new fashion and photo trends, we're guilty of being pretty much invested in the wedding! Aren't we? And especially if it's a Bollywood celebrity's wedding. (Recommended Read: Soha Ali Khan Shares Inaaya Naumi Kemmu's DIY Diwali Preparations As She Makes 'Torans')

Neha Kakkar had taken wedding vows with Rohanpreet Singh in a grand wedding which stretched across two days, October 24-25, 2020. Done and dusted with the wedding, Neha Kakkar and Rohanpreet Singh hosted a grand reception in Chandigarh on October 26, 2020, and it was a star-studded affair. Scroll down to check out pictures and videos from the same! For the grand reception, Neha Kakkar chose a regal white lehenga paired with white net dupatta, and a neckpiece of green emeralds. Hair tied in a pasty bun and minimal makeup with a tinge of sindoor and red chooda in her hands imparted her the glow of a newly-wed bride, and we couldn't take our eyes off her! The handsome groom, Rohanpreet Singh twinned with his wifey in a white shirt paired with a royal blue-coloured blazer and a white turban. The couple looked utterly happy and much in love with each other. Check out the pictures and videos below: 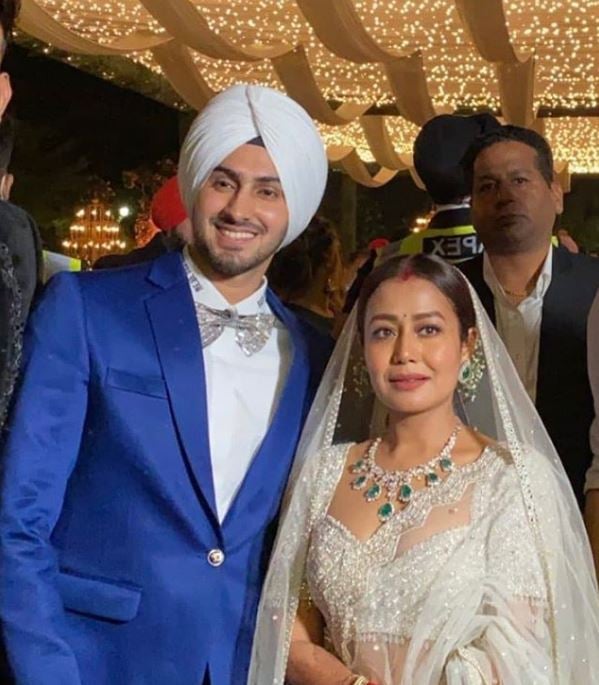 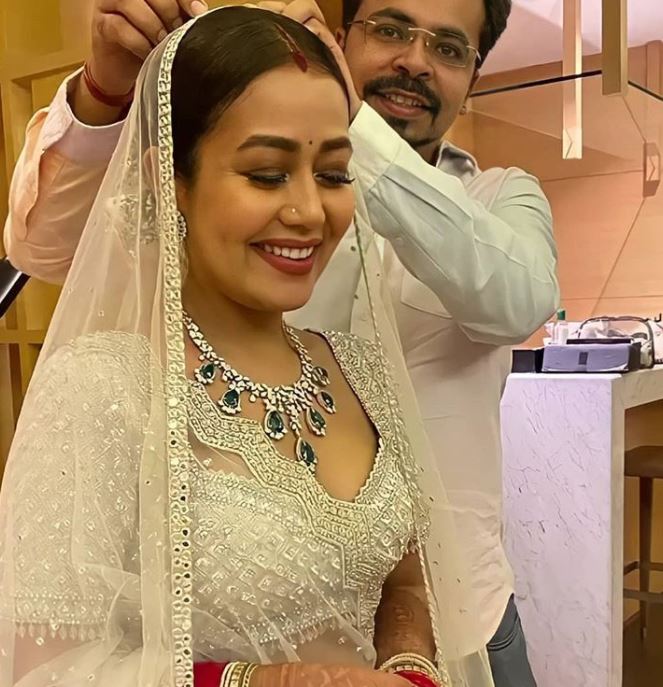 Neha Kakkar and Rohanpreet Singh had a traditional Gurudwara wedding on October 25, 2020, followed by a traditional Hindu wedding in the night. For her Gurudwara wedding, Neha had donned a Sabyasachi lehenga in subtle shades of pink. The handsome groom, Rohanpreet Singh had colour-coordinated his wedding outfit in shades of pastel pink with his bride. Neha's lehenga had heavy golden embroidery work with golden border and a heavy golden maang teeka and choker neckpiece had accentuated her look. For her pheras, Neha had opted a red lehenga by Falguni Shane Peacock paired with a double dupatta. She had accessorisedsed it with with a layered neckpiece, matching earrings and a nath. 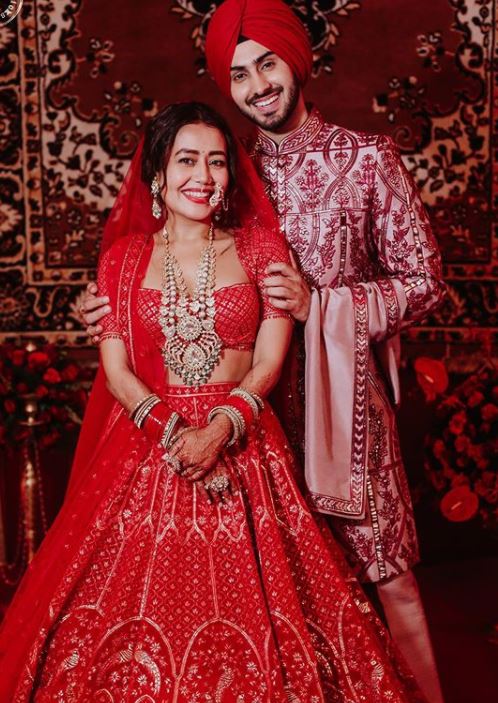 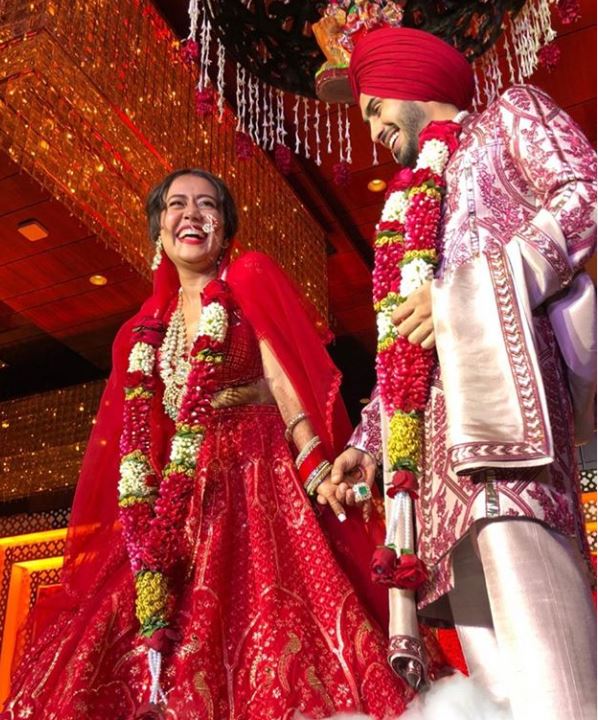 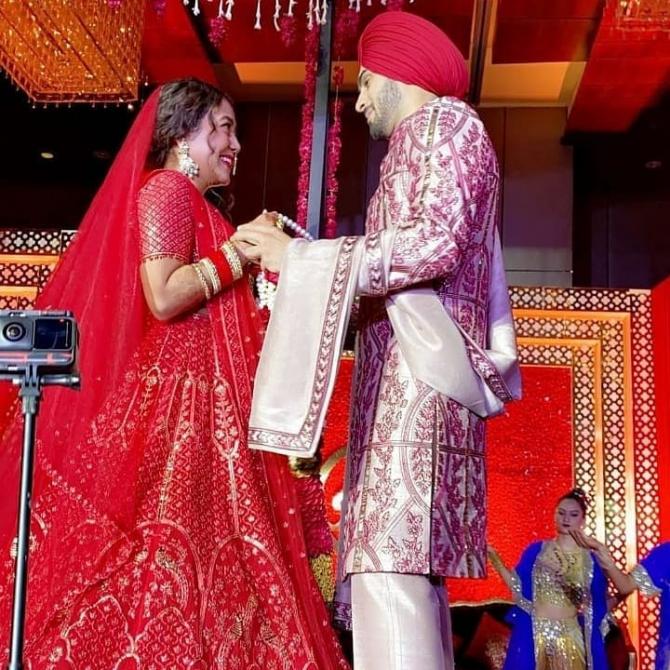 Talking about the mehendi ceremony, the couple had twinned in shades of green. While Neha had opted for Anita Dongre's green Banarasi lehenga, with Anita Dongre's choker set, Rohanpreet had gone for a green bandhgala kurta pyjama. Neha had also posted pictures flaunting her mehendi, which had shown her hubby-to-be, Rohanpreet's name on her ring finger. Sharing the pictures, Neha had written, "Mehendi Lagaungi Main Sajna @rohanpreetsingh Ke Naam Ki", whereas, Rohanpreet's caption could be read as "Look at My Bride to be!!!" (Also Read: Janhvi Kapoor Misses Late Mother, Sridevi, Shares An Unseen Picture Of Her Hugging Boney Kapoor) 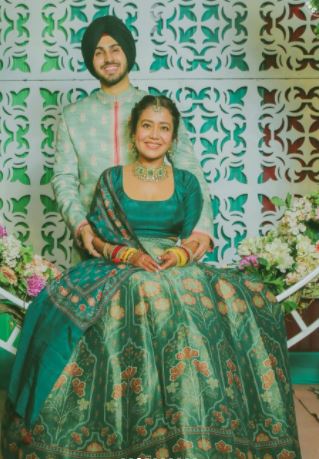 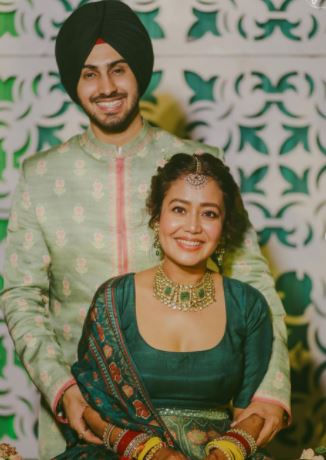 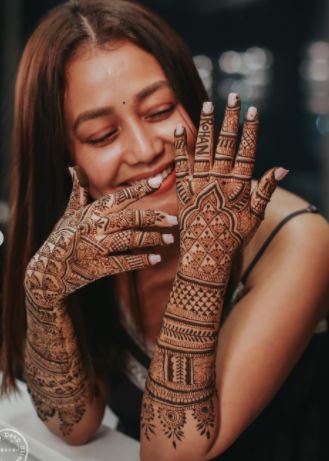 The wedding festivities had started with haldi ceremony, that had taken place on October 23, 2020. The adorable couple had gleamed in their simple yet chic haldi outfits. For her haldi ceremony, Neha had donned a plain yellow saree, and Rohanpreet had twinned with his ladylove in a yellow kurta. The gorgeous bride had looked stunning in her plain yellow saree with a messy hair bun. Check out the pictures from the haldi ceremony below: 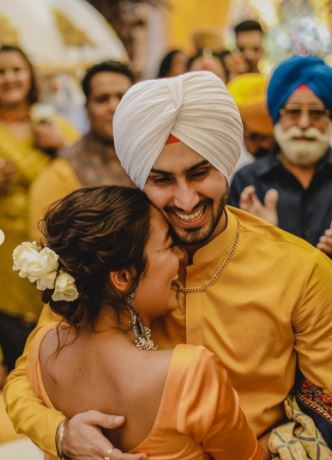 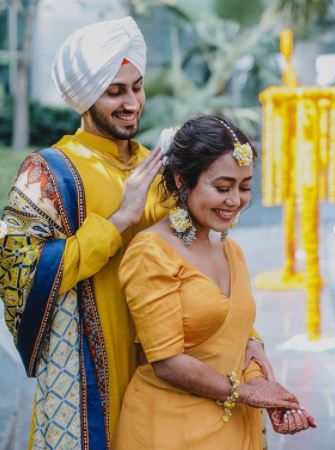 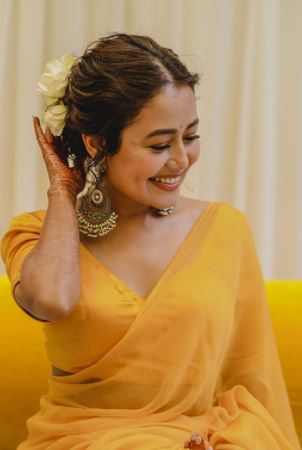 After the haldi, the sagan ceremony had taken place wherein, Neha had flaunted her red chooda with a red lehenga which she had paired with a white shirt to give it a chic look. In the video that we had found from the sagan ceremony, Neha could be seen teasing Rohanpreet by lip-syncing and acting on their song together, Nehu Da Vyah. Neha’s happiness in the video had known no bounds as she had radiated the bridal glow. On the other hand, Rohanpreet had opted for a white suit with a red turban. (Don't Miss: Lakshmi Mittal's Brother Pramod Mittal, Who Spent Rs 505 Cr On Daughter's Wedding, Declared Bankrupt)

Well, we loved Neha Kakkar's reception look! What about you?