Neelima Azeem Reveals How 6-Year Old Shahid Kapoor Saved Her From A Stranger, Video Inside

Neelima Azeem Reveals How 6-Year Old Shahid Kapoor Saved Her From A Stranger, Video Inside

Shahid Kapoor is in a happy space as he is shuttling between his daddy jobs to working fulltime on his upcoming films. The 37-year old star has spent almost 15 glorious years in the industry, and for some reason, he had always maintained his boy-next-door image. However, not many know that he is a product of a broken home as his parents, Neelima Azeem and Pankaj Kapoor parted ways long ago, which has left a void in his life. (Recommend Read: Saumya Tandon Of 'Bhabiji Ghar Par Hai' Fame Shares A First Picture Of Her Baby Boy)

The way his childhood shaped, it has instilled a feeling of protectiveness for his family. And, when Shahid appeared on the celebrity chat show, Koffee With Karan, he revealed some secrets about his life. And one of it is that he is extremely protective about his little brother, Ishaan Khatter, and often becomes over-protective for his mother, Neelima Azeem.

Shahid Kapoor's Mom Neliima Defends His Character In 'Kabir Singh', Lashes Out At All Who Judged We have got our hands on a throwback interview of Shahid Kapoor when he was invited on Simmi Garewal’s show long back. In a candid interview, the host, Simmi revealed that Shahid has a special woman in his life and then a video of his mother, Neelima Azeem was shown. In the video, Azeem talks about an incident in which a ‘puny French guy’ was following her and before he could say anything to her, Shahid stood in front of him and said, “Excuse me, sir, before you talk to her, you have to deal with me”. Check out the video here:

In the same interview, she revealed the first time he performed on the stage, “He has had a very interesting journey because he started working as a child, then he started taking Shiamak Davar classes and before that he did something in Delhi for a series where he played a 7-year-old child, who was separated from his mother. He [Shahid] was brilliant at that time, he was 7-year-old.” She further added, “The first time we saw him perform, the entire team was like 'yeh bacha nahi hai yaar. Kya hai yeh! Kya karta hai yeh'. I saw Shahid growing as a dancer after that and he became an impeccable performer. After that, he just changed our lives. He took our lives forward in Bombay. We started living better, we had all the luxuries and comfort.” (You May Also Like: Ambani's 'Choti Bahu' Radhika Merchant Looks Jaw-Dropping In An Icy-Blue Sabyasachi Lehenga) Neelima ji also talked about his journey, and said, “My stress was over. I was a single mother and till today he is taking care of Ishaan and me in every way. He is like 'hats off'! Shahid has worked very hard and has had a very challenging journey and the thing about both my boys is that they are very good sons, very honest and clean and extremely vulnerable. Ishaan is more like joyous and has his own energy.” Shahid in an interview with PTI, has revealed how as an actor he is always in a state of loneliness. He said, “As an actor, you are always lonely. You are always in the spotlight so that's what people see. But when you are on your own, it's very lonely. And it's a journey that's personal. I believe, at that time, something emotional happens which reflects in my performance”. The Padmaavat actor further talked about his own career graph, “When I look back at my career I feel 'Wow I did some really bad movies' and 'Wow I did some really great movies' and they were all like mixed up and were back to back. It is crazy because it has been little inconsistent. In the last four or five years, the effort has been to try and participate and, create content that is consistent.” (Don't Miss: Shweta Nanda Reveals What She Loves, Hates And Tolerates About Sister-In-Law Aishwarya Rai Bachchan)

Well, Shahid was a dude even at the tender age 6! What do you think? 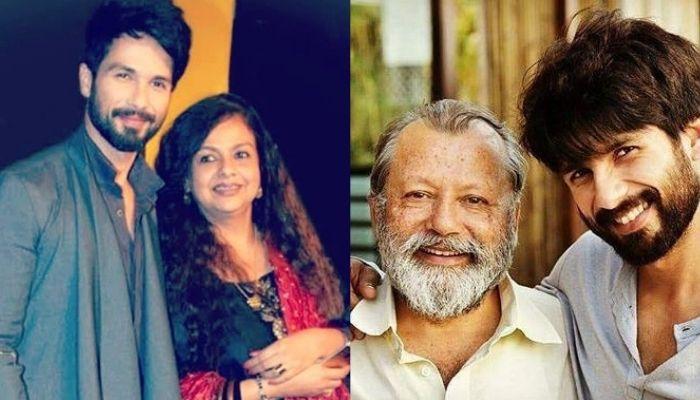 Neliima Azeem is an actor and a Kathak dancer, who is also a mother to Shahid Kapoor and Ishaan Khatter. Before making her name in the Hindi film and television industries, Neliima had met her first love, Pankaj Kapur at the National School of Drama. The two creative souls, while

Shahid Kapoor's Mom Neliima Defends His Character In 'Kabir Singh', Lashes Out At All Who Judged