A popular Bollywood actress and now a Politician, Nagma made her debut opposite Salman Khan in Baghi – A Rebel For Love and the movie became the 7th highest grossing film of 1990. From there on, she started getting many good offers and she also went on to do some big banner films such as Yalgaar, King Uncle, Bewaffa Se Waffa, Police Aur Mujrim etc.

After doing a handful of Bollywood movies, she tried her luck down south, on her good friend, Divya Bharti’s insistence. She subsequently became the No. 1 Heroine in Tamil and Telegu cinema. After doing many films down south, she shifted her base back to Mumbai and started doing Bhojpuri films. She received much appreciation from Bhojpuri cinema as well, for her work and glamorous avatar. During all these years, she was always in news, not only for her films but also for her personal life. She was born to a Hindu father and a Muslim mother in 1974, as Nandita Arvind Morarji in Mumbai, Maharashtra. Her father belonged to the royal family of Jaisalmer who later shifted base to Gujarat and then to Mumbai. He was a popular businessman who was better known as a textile magnate. Though both mother and father parted ways after a few years and went on to remarry, Nagma was close to both, she was even there by her father’s side in Pune during his last days. After 16 years of her film career, she revealed it to the media that she was the daughter of such a big business tycoon, after her father’s demise in 2006. Though Nagma, 46 is single and unmarried, there were many men in her life who left her heartbroken. 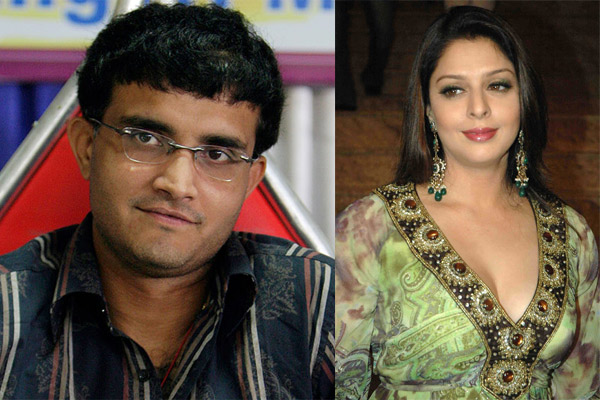 Yes, you read the name right, the ex-Indian cricket captain, Sourav Ganguly was in a serious relationship with Nagma in 2001, but always kept it a secret. He was a married man and also the captain of Indian cricket team. There were even talks of the two tying the knot in a temple secretly in Andhra Pradesh, which they denied. After being in a serious relationship, the two parted ways and the reason was totally unexpected. Whenever India used to lose any match, people used to blame Nagma for being a distraction in Sourav’s life. Talking about her relationship, Nagma once said,

"A smaller interest had to be sacrificed for bigger interests... When a game is being played, people should understand it is a sport. It's very weird that people started getting carried away. Whenever India played, people said that a person was not doing well because he was emotionally attached. This is so juvenile.”

People continuously trolling her for Indian cricket team’s bad performance in matches affected their relationship and the two decided to call it quits. Nagma soon started concentrating on her film career down south and this is where she met the next man that came in her life to leave her.

Kartik Aaryan Opens Up About His Rumoured Linkup With Sara Ali Khan, Says, 'It Was Not Promotional'

Sangram Singh Shares Wedding Plans With Payal Rohatgi, Talks About Their Quirky 'Save The Date' Post After breaking up with Sourav Ganguly, she fell in love with South Indian actor, Sharath Kumar. Sharath Kumar is the actor and MP who was already married when he met Nagma and their controversial affair started. The two fell in love but their affair didn’t culminate into anything positive. As soon as Sharath’s wife got to know about his affair with the actress, she left him and soon filed for the divorce. After the controversy, Nagma decided to part ways with Sharath. Soon Sharath started giving her death threats which forced Nagma to bid adieu to her filmy career in South. 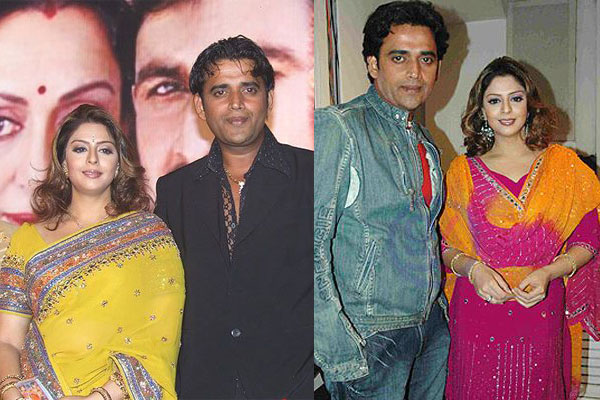 After saying goodbye to South Indian films, Nagma shifter her base to Mumbai and decided to try her luck in the Bhojpuri films. She went on to star in many movies with the Bhojpuri superstar, Ravi Kishan. This time again, she fell for a much-married Ravi Kishan but the only difference was that Ravi’s wife was fine with their extra-marital affair. Though Nagma never accepted her relationship with the Bhojpuri star, Ravi openly talked about it. In one of his previous interviews, Ravi opened up about his relationship with Nagma and said,

"My friends and family are aware of my relationship with Nagma. My wife has accepted Nagma as a beautiful part of my life. I don't lie to my wife about her. She's gracious enough to accept that there can be a special relationship between a man and a woman outside of marriage. I'm not the first nor the last married man to have an intimate relationship with another woman.”

Getting candid about their intimate relationship, Ravi further added,

"Nagma accepts that I wouldn't leave my wife and children. We're living in the moment. We don't even talk about the future. In fact, Nagma comes home and often cooks along with my wife. My wife has full faith in me. And I'd never let her down. In fact, she encourages me to sign films with Nagma. 'Your friendship shows in your work,' she says. My wife doesn't think of Nagma as a home-breaker."

Eventually, after painting the town red with their love, the two actors parted ways. The reason was that Ravi went to participate in the first season of Bigg Boss and the distance between them created the gap and made Ravi realise that he was head-over-heels in love with his wife. 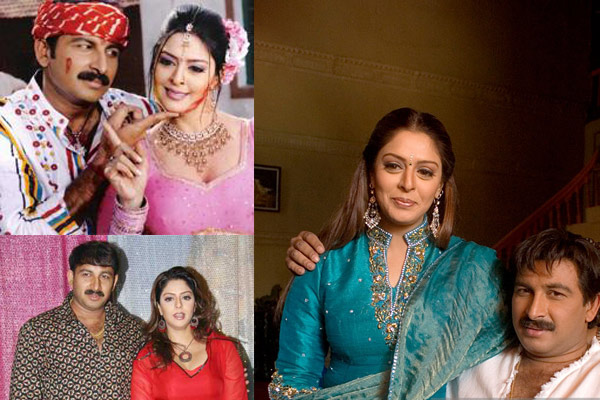 After dating Ravi Kishen for a long time, Nagma moved on in life and had a fling with another Bhojpuri actor, Manoj Tiwari who was Ravi’s biggest competition in the Bhojpuri films. She wanted to hit Ravi where it hurts the most thus had a fling with Manoj. The two actors always denied their link-up news and in one of the interviews, Nagma denied their relationship and said,

“Just because I'm working with him doesn't mean there is something going on between us. Please spare me! Both Ravi and Manoj are married men."

The actress was also linked to a cricketer named Khiche Khan, but the rumours soon died. Talking about her failed relationships, Nagma once said, "I've had my heartbreaks but I've coped with them. I'm not bitter about any of the men either."

Well, the actress has moved on in life and is currently single and concentrating on her political career. The actress is an ardent follower and believer of Christianity. It is also said that Julie 2 was made on Nagma and her controversial life.