Mira Rajput Kapoor's parents are super proud of their daughter's achievement. Check out a cute picture of their's posing with Mira's advertisement in a mall!

Bollywood actor, Shahid Kapoor's wife, Mira Rajput Kapoor, shared her parents' happiness when they spotted their daughter's poster in a mall. At the mere age of 26, Mira has it all. She is a star wife, a super mommy of two kids, Misha Kapoor and Zain Kapoor, and a gorgeous fashion blogger, who loves her work.

It almost seems like yesterday when we first saw the 21-year-old, Mira, walking out of the Mumbai airport holding the man of her life, Shahid's hand. In that moment, we all had envied her and the duo's sizzling chemistry. Soon, Mira made her own place in the hearts of millions of Shahid's fans and created her own fanbase.

Shahid Kapoor Cannot Get Over Mira Rajput Kapoor's Beauty, Asks Her Why So Pretty

On July 28, 2021, Mira took to her Instagram handle and shared a super cute picture of her parents. In the priceless photo, we can see Mira's parents happily posing with their daughter's poster, which they had spotted in a mall. Sharing the picture, Mira wrote, "I owe everything I am today to my parents. And I can’t even begin to describe this feeling. I love you Mom & Dad!" Check it out below:

Mira and Shahid had completed six years of their happily ever after on July 7, 2021. To wish her husband, Mira, had shared an adorable picture of squeezing him in a hug. Alongside it, she had written, "I love you more than words suffice. Happy 6, my love my life."

Shahid also loves indulging in social media PDAs. On July 8, 2021, he had shared a cute IG story with his wifey, Mira. In the picture, we could see Shahid looked handsome in an olive-green t-shirt. Atop it, Shahid had written, "Major missing @mira.kapoor." For the uninitiated, Shahid never fails to shower love on his wife. In an interview with the Filmfare, Shahid had praised his wife for creating a perfect home and had said, "Marriage is like a book. Mira’s my biggest reality because we share our lives together." The actor had even shared that Mira had married at a young age, and now with two kids, she is acing her many roles.

On the work front, Shahid Kapoor will next be seen in Jersey. The sports-drama film is expected to hit the silver screens in November 2021.

Next Read: Shahid Kapoor And Mira Rajput Kapoor's Unseen Pictures In Their Traditional Best At A Family Wedding 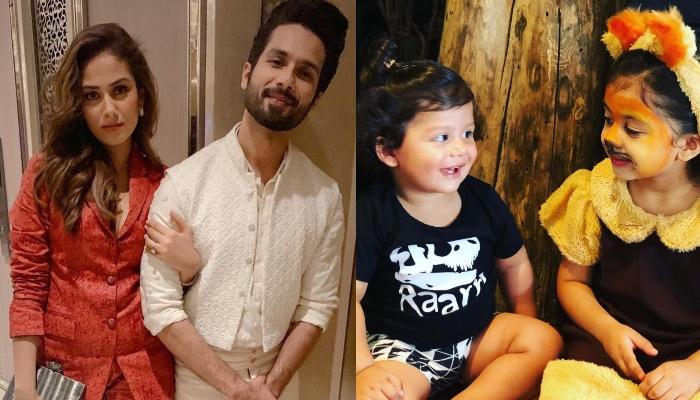 Bollywood actor, Shahid Kapoor and his wife, Mira Rajput Kapoor, are the coolest parents. They love pampering their kids, Misha Kapoor and Zain Kapor. From teaching them the good life lessons to enjoying every little moment with them, Mira and Shahid make sure to turn their kids' childhood into a