Bollywood actress, Kiara Advani flaunted a lehenga from the shelves of the ace-designer, Anita Dongre. Though its price is a bit on the higher side, it's a perfect pick for this festive season!

As the festive season is around the corner, we girls are always on the lookout for some new styling tips, that would make heads turn. And, what would be a better way than getting inspired by our favourite B-Town divas? Well, actress, Kiara Advani is quite well known for her ethnic attires and has been winning our hearts by flaunting some of the best ethnic ensembles for quite some time now.

From flaunting a white and yellow lehenga for the promotions of her film, Shershaah to styling the dupatta of her gharara set in such a way that it had looked like a saree, Kiara had aced in all of it. However, Kiara Advani never disappoints her fans with her style statements, she has come up with yet another lesson for all the girls out there. If you are someone, who wants to experiment with her Karwa Chauth or Diwali looks, then the actress has some major styling tips for you all. 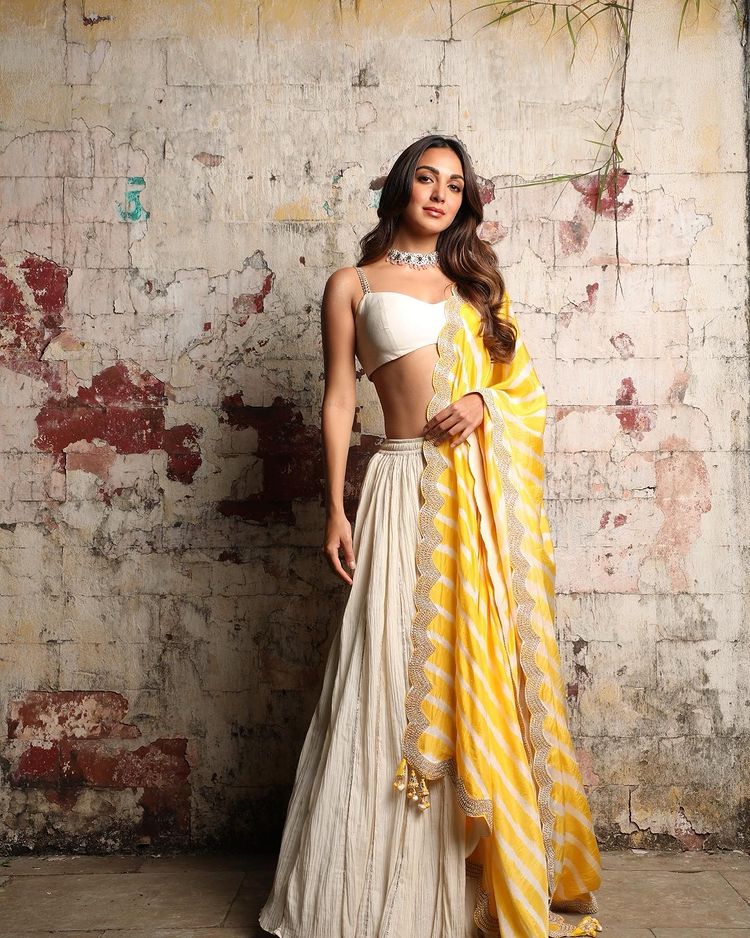 To stun her look this time, Kiara Advani ditched all the bold colours and opted for a pastel shade instead. She flaunted her look in an aqua green organza lehenga and paired it up with an embroidered choli with pink floral work and a netted dupatta of the same pattern. Her outfit was from the ace designer, Anita Dongre and the official Instagram handle of the brand featured some pictures of the stunning actress in the outfit as she posed like a fashionista. 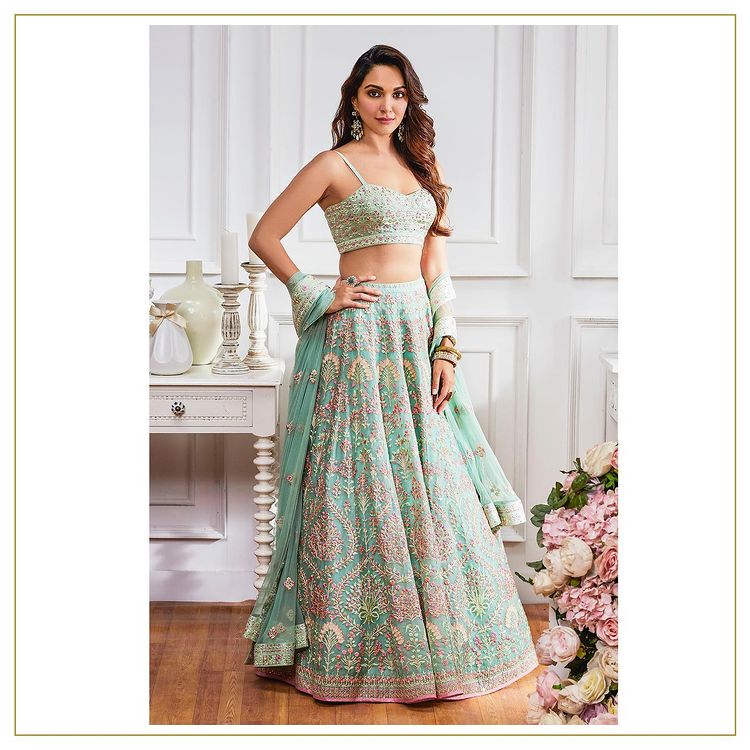 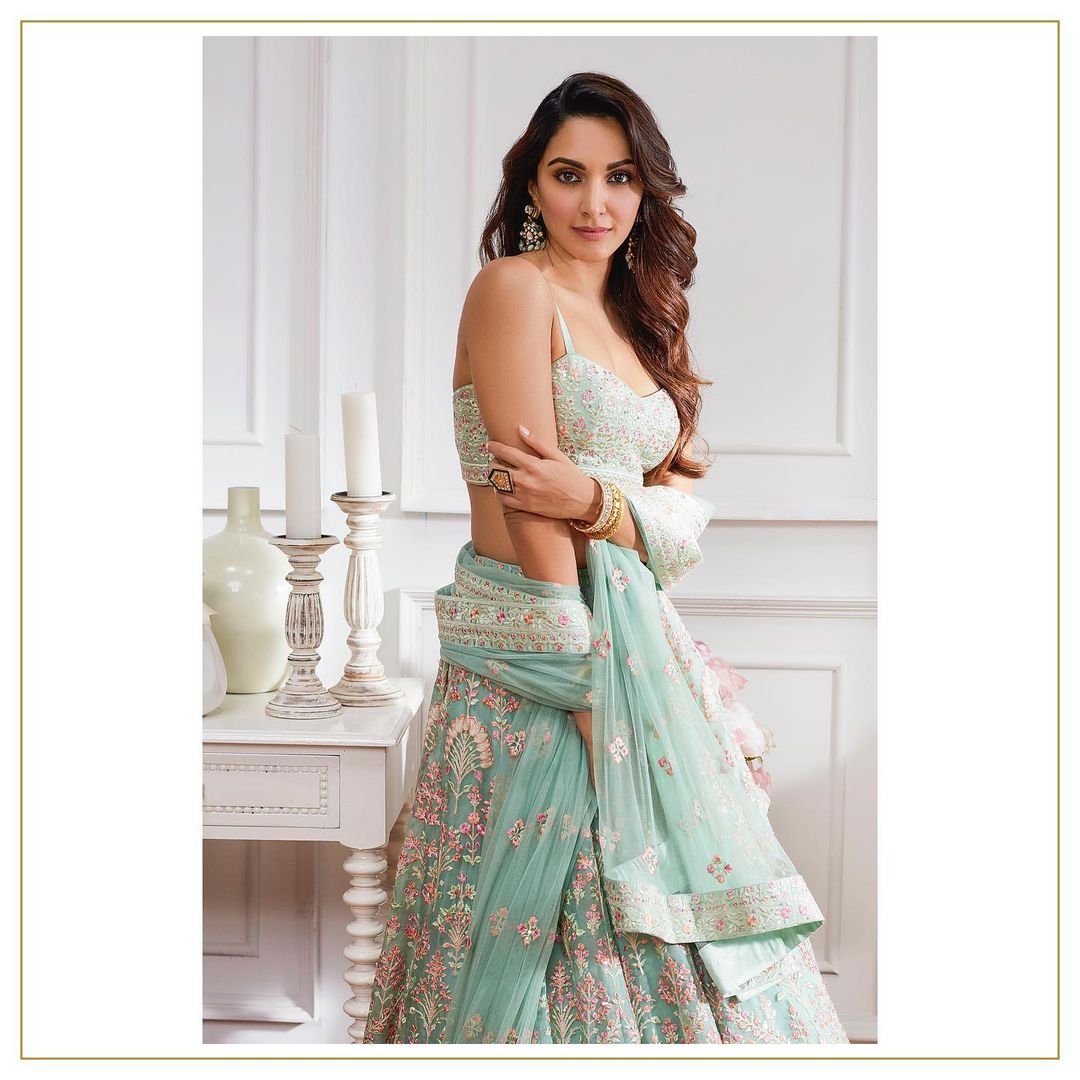 To complete her look with the surreal outfit, Kiara opted for kohl-rimmed eyes, a hint of blush, nude-pink lips and statement earrings and left her hair open over her shoulder in soft curls. While the overall look is perfect couture for every girl to style this festive season, it also comes at a bomb price. On the official website of Anita Dongre's brand, the lehenga is priced at Rs. 1,99,000. The website describes this piece as ''Feel swept away in our organza silk creation. Adding romantic touches are a posse of embroidered wild flowers spilling over a silhouette of lightness and femineity. Complete with pockets."

Suggested Read: The Price Of Urvashi Rautela's Gown Weighing 85 Kgs Is Almost Equal To The Cost Of Luxurious BMW X1

Besides, making everyone's head turn in her ethnic ensembles, Kiara has also aced in shelling out fashion goals, when she had paired an ordinary outfit with a super-expensive and classy handbag. On September 15, 2021, Kiara Advani was spotted in Mumbai, by the paparazzi. She had donned cutwork embroidered dull green maxi dress with gold-slide-on. However, it was her bag from Gucci that had stolen all our attention. With a very subtle makeup on, the Kabir Singh actress had completed her look with her wavy tresses left open.

While the dress was from Zara and was priced at around Rs. 500, Kiara Advani had nailed her look by pairing it up with a blue tote bag from Gucci's new Diana collection. The mini tote bag was accentuated by its bamboo handles and Double G hardware. Crafted from light blue leather, the accessory was further defined by two neon bands so that they stay in shape and do not wear out over time. The tote bag comes at a whopping price of $2650 on the brand's official website and costs around Rs. 1,94,804 in Indian currency.

On the work front, Kiara Advani was last seen in the movie, Shershaah.