Bollywood actress, Katrina Kaif left everyone in awe of her after she was spotted outside Vicky Kaushal's residence in a pristine white saree. Check out the unique intricate work on it!

Bollywood actress, Katrina Kaif has made a firm mark for herself in the Hindi film industry with her sheer dedication and is now one of the highest-paid actresses in Indian cinema. With her acting performances in movies like Rajneeti, Zindagi Na Milegi Dobara, Ek Tha Tiger, Dhoom 3, Tiger Zinda Hai and Bharat, she has proved the mettle of her versatility. Apart from her acting skills, Katrina is also admired for her fashion quotient. Time and again, she has broken the internet with her looks and outfits.

Right now, Katrina Kaif is in the news for her wedding speculations with her alleged boyfriend, Vicky Kaushal. According to a report in Pinkvilla, Katrina and Vicky are all set to have a grand wedding on December 9, 2021, at Six Senses Fort, Barwara, Rajasthan. It is also reported that Katrina and Vicky will wear Sabyasachi on their big day. Katrina will wear Abu Jani for her mehendi ceremony, Manish Malhotra for her sangeet ceremony and Gucci for the reception. Amid all these reports, Katrina was spotted by the media in a pristine white saree, and her pictures have taken the internet by storm. 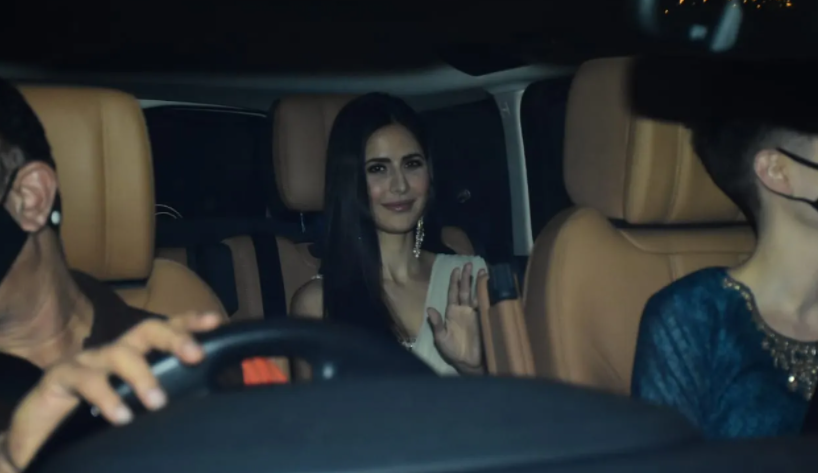 On December 5, 2021, Katrina Kaif was spotted outside her boyfriend, Vicky Kaushal's residence with her mother, Suzanne Turquotte. The mother-daughter duo looked glamourous in their respective outfits. While on one side, the doting mom looked beautiful in a green-coloured suit, on the other side, it was Katrina, who left everyone in awe of her with her lovely pristine white saree. The masterpiece is from the shelves of famous celebrity designer, Arpita Mehta. 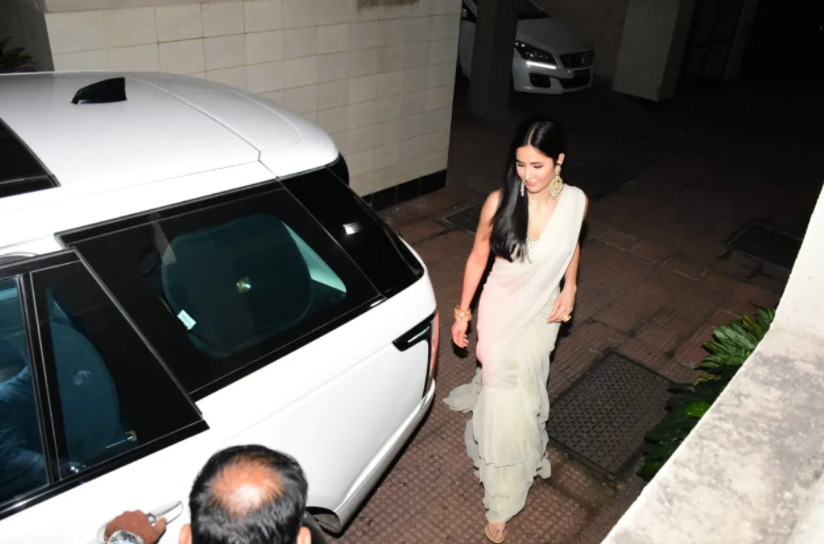 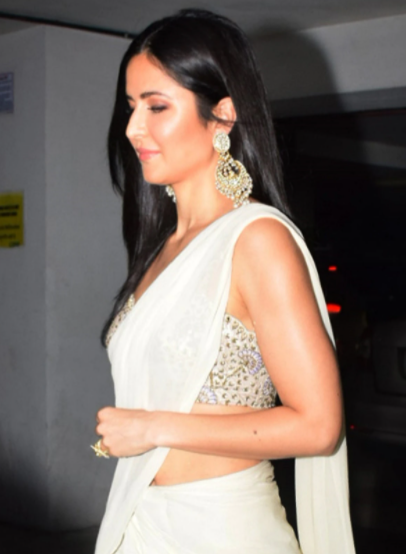 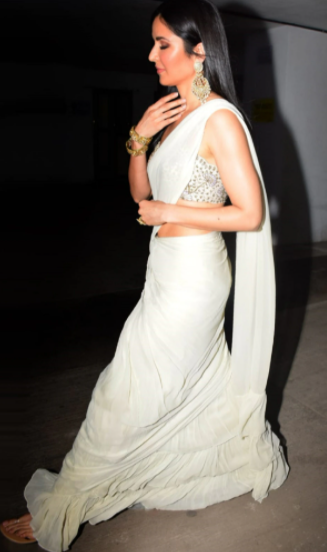 Talking more about the intricate details of Katrina's white saree, it is an ivory georgette ruffled saree set. The gorgeous actress teamed her saree with a lovely customised sequin silver strappy blouse. The shimmery blouse was clearly the highlight, as it was decorated with some unique reflective diamantes on an ivory background. Also, it's impossible not to lose our hearts on the detailed embroidery on it. Katrina's blouse came with a plunging neckline, and beautiful double straps featuring stylish sequin embellishments. The actress draped the white saree in the traditional Indian style.

Another part of Katrina Kaif's saree that needs a special mention is her pallu that came with unique ruffles on its edges. Katrina completed her look with some chunky royal bangles and heavy gold earrings, along with her stylish toe heels. She looked nothing less than a diva in her pristine white saree. Her pictures are all over social media, and everyone is anxious to know the price of this beautiful saree. After some digging on the internet, we discovered that the cost of Katrina's pristine white saree is Rs. 54,000 on the designer's official website. 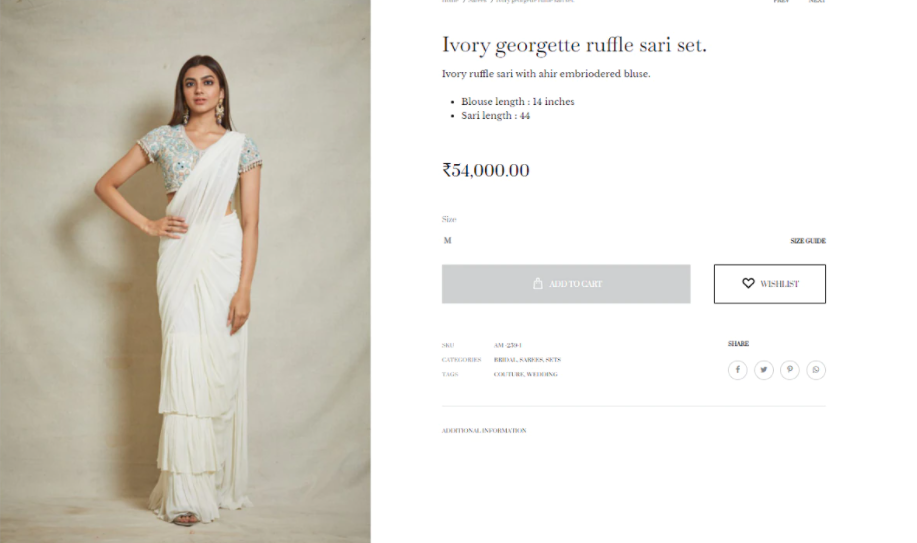 A few months ago, during the promotions of her last-released film, Sooryavanshi, Katrina Kaif was spotted at a promotional event of her film wearing Sabyasachi Mukherjee's burnt-orange coloured sheer saree embroidered with floral patches. The stunning actress had paired it with a floral printed full-sleeved blouse. She had kept her tresses open and had opted for minimal makeup with bindi, soft smokey eyes, nude glossy lips, and a pair of earrings. 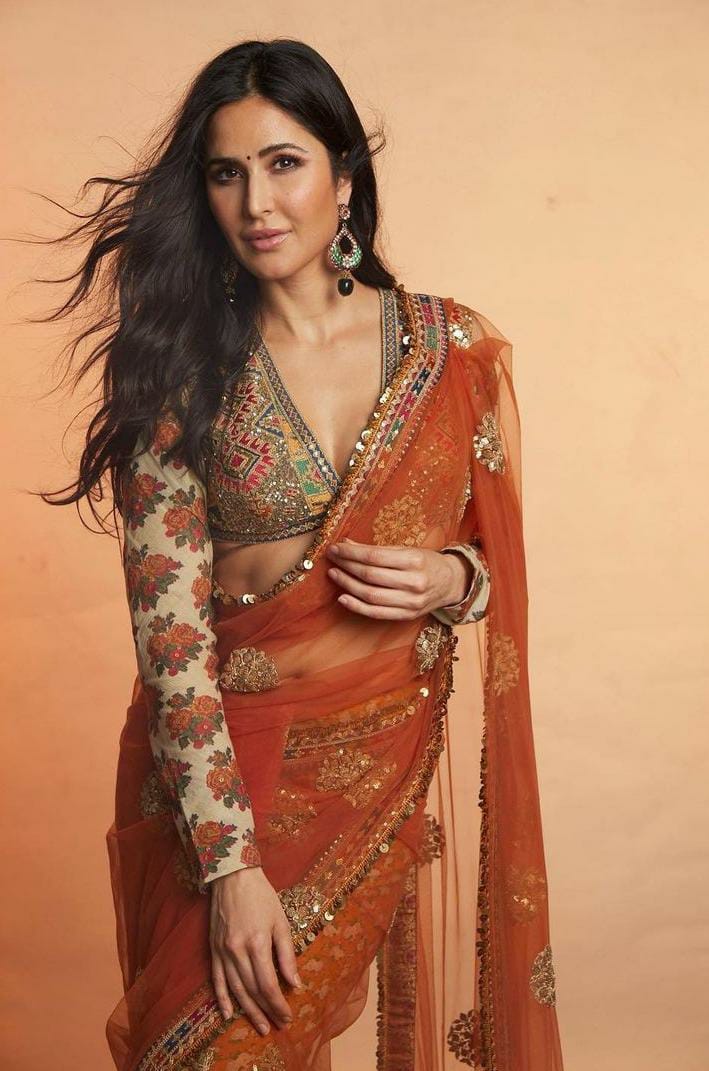 When it comes to breaking the internet with just one glimpse, Katrina Kaif is undoubtedly a step ahead of everyone else!