Nobody is a stranger to the Kapoor genes. The Kapoor sisters, Karisma Kapoor and Kareena Kapoor Khan have pretty much grown up in the limelight and have never failed to impress us, on-screen as well as off-screen. This sisterhood is definitely awe-worthy. From giving us major goals with their matching appearances to their constant support for each other, Kareena and Karisma have always been together to their thick and thin, and the affection and protectiveness between them is quite evident in their pictures or interviews. (Also Read: Shloka Mehta And Akash Ambani Arrive Together From London, Her No-Makeup Look Is Winning Hearts)

For a while now, Kareena Kapoor Khan has been on a vacation with her hubby, Saif Ali Khan and son, Taimur Ali Khan. After spending some quality time with each other in Tuscany, Italy, the Kapoor-Khan family headed off to London, where they were joined by Bebo’s sister, Karisma Kapoor and her kids, Samaira Kapoor and Kiaan Raj Kapoor. Karisma had given a sneak peek of their London holiday as this ‘famous five’ group happily posed for the camera. Karisma had captioned the post as, “#love”. 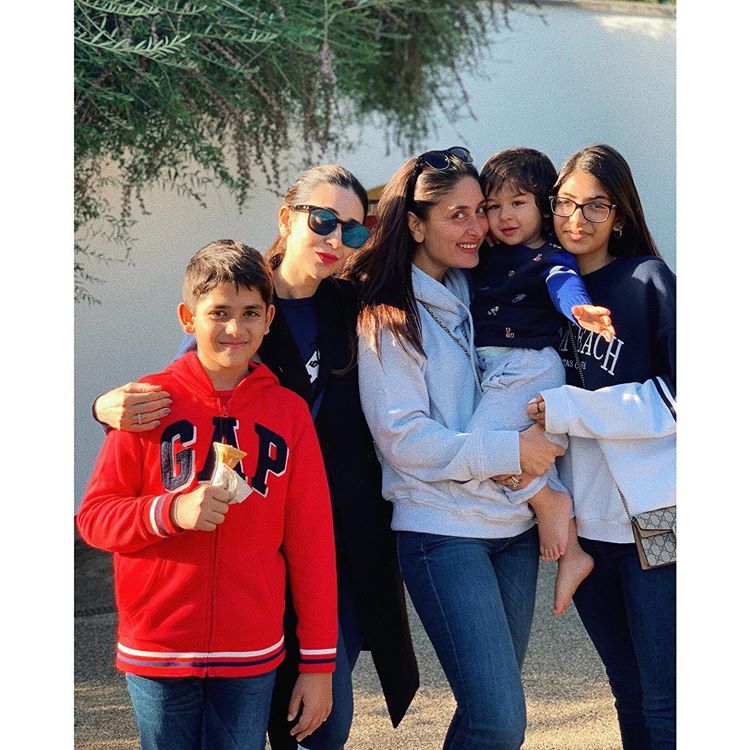 On June 18, 2019, the Kapoor sister duo, Karisma Kapoor and Kareena Kapoor Khan were joined by Nita Ambani for a lunch get-together. Going by Karisma’s post, it seems like the ladies had a good time together as she had captioned it as, "Wonderful afternoon #londondiaries" followed by heart emojis. While Lolo and Bebo had twinned in black and denim, Nita Ambani looked elegant in an all-white outfit. 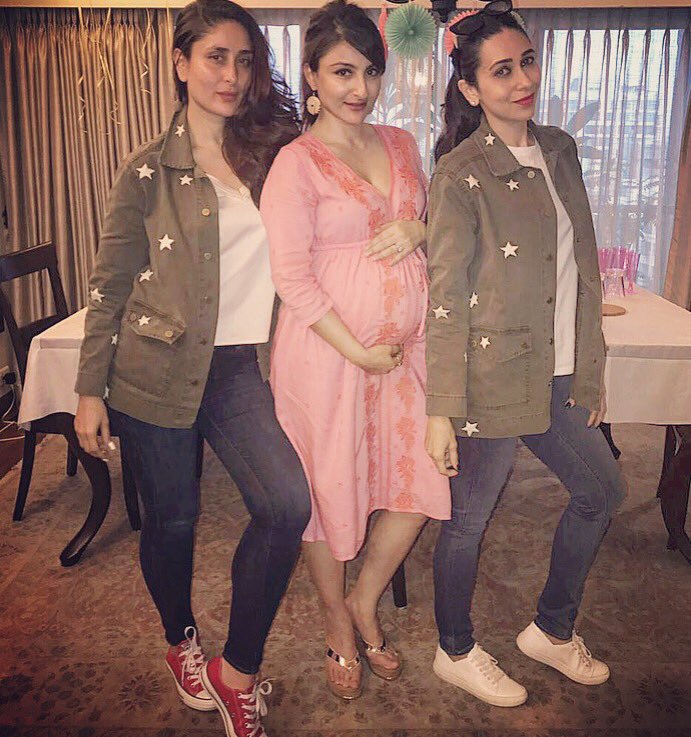 And in similar lines, April 29, 2019, was no different! The Kapoor sisters had headed out for a mini-reunion with their ‘veeres for life’, Rhea Kapoor and Poonam Damania. Rhea had shared a picture of the girl squad and had written, “Veere mini reunion.. missed you @sonamkapoor @reallyswara @shikhatalsania and mostly YOU @mickeycontractor”. Karisma too, had posted a photo on her Instagram handle and had captioned it, “Veere’s #funlunch”. Karisma and Kareena twinned for their lunch outing in white tees, denim and hair tied in a tight bun. (Also Read: Angad Bedi Tying His Baby Girl, Mehr Dhupia Bedi's Shoelaces Reflects Of A Pure Father-Daughter Love) 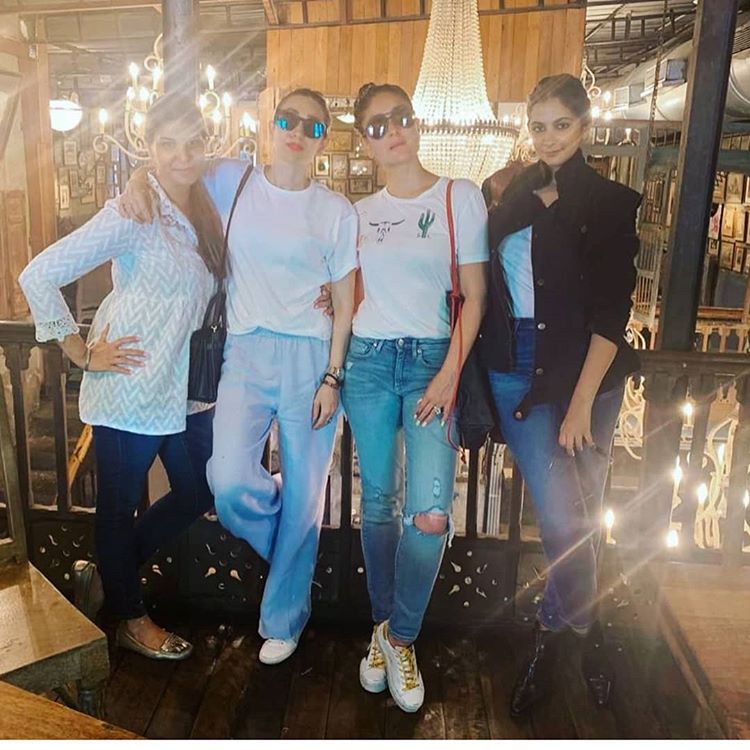 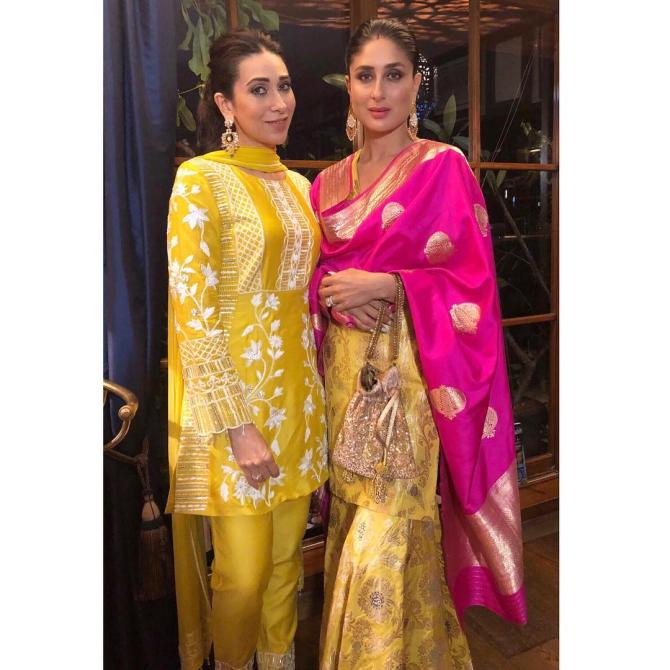 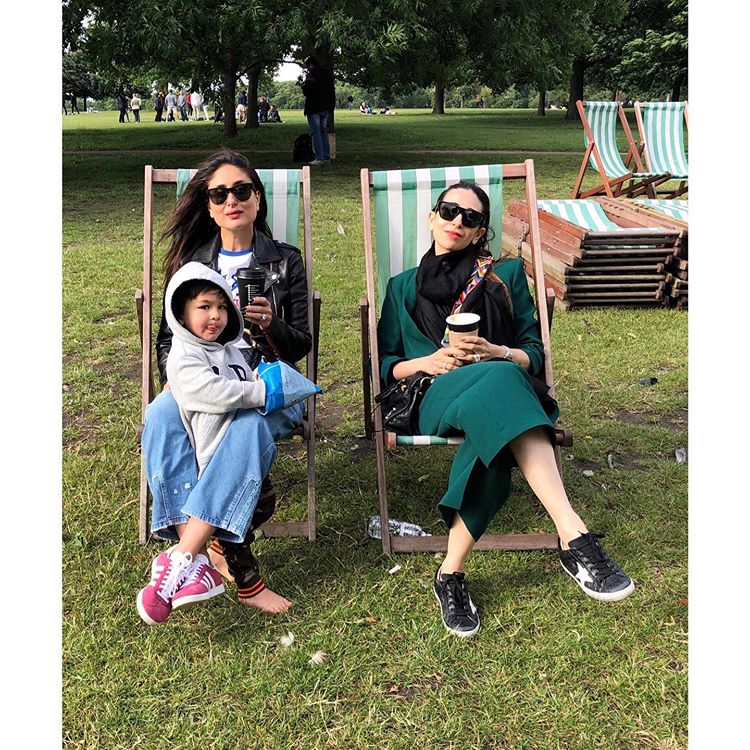 On Diwali 2018, Karisma Kapoor had shared a picture of ‘mama’s with their babies’ on her social media handle, and had captioned it, “Mama’s and their babies #aboutlastnight #onlylove #family #diwali #festivaloflights pic @khemster2”. In the picture, little Taimur Ali Khan can be seen cuddled in maasi Karisma’s arms, while Samaira Kapoor and Kiaan Raj Kapoor posed standing beside their maasi, Kareena Kapoor Khan. (Also Read: Exclusive! Unseen Pictures And Videos From Charu Asopa And Rajeev Sen's Pre-Wedding And Wedding) 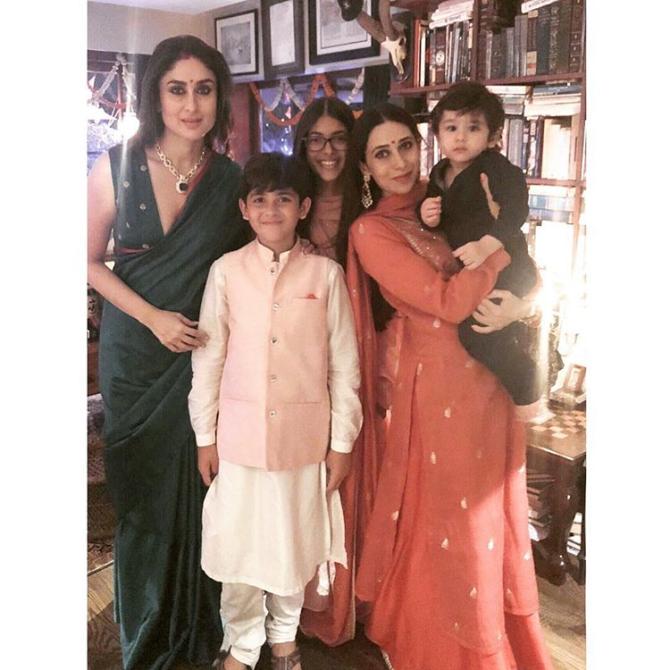 How did you like this monochrome twinning of the girl gang in London? Keep us updated!